The Rooikat 76 is a South African wheeled armoured fighting vehicle, developed during the 1980s as a replacement for outdated AFVs in service at the time. Coming soon with update 1.95 "Northern wind", this eight-wheeled feline predator will become a formidable new addition to the top ranks of the British ground forces tree in War Thunder! 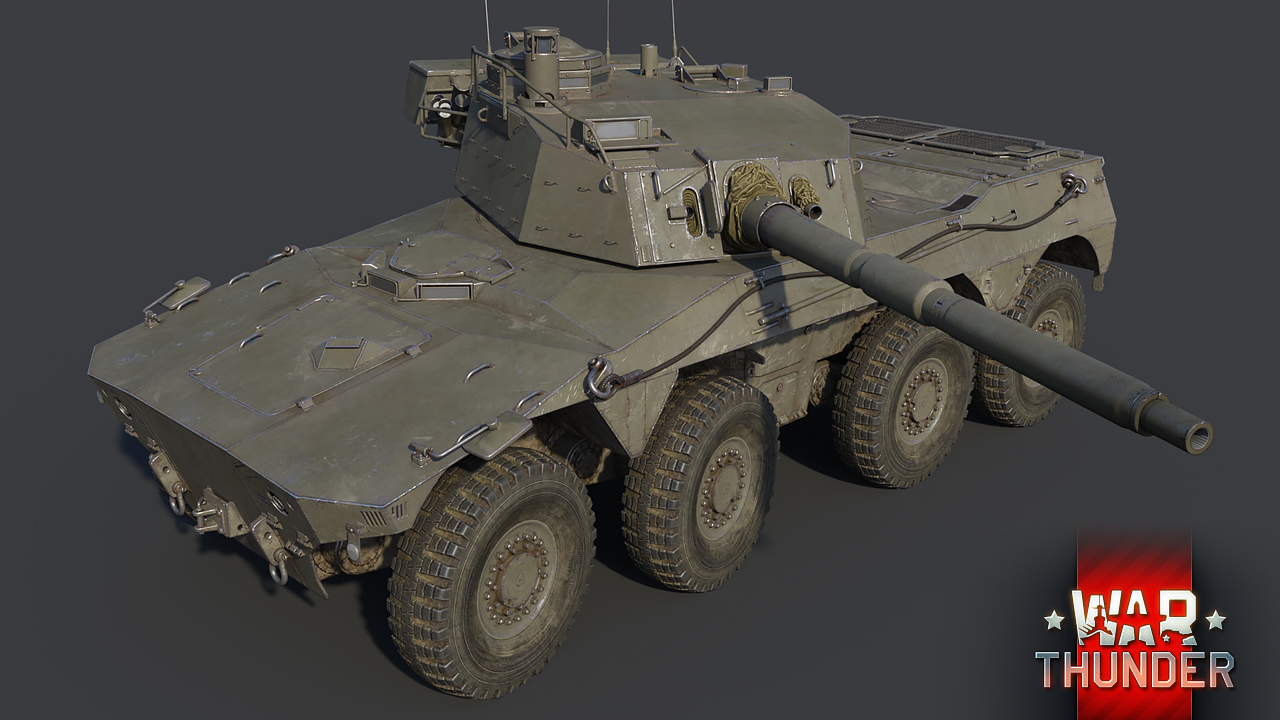 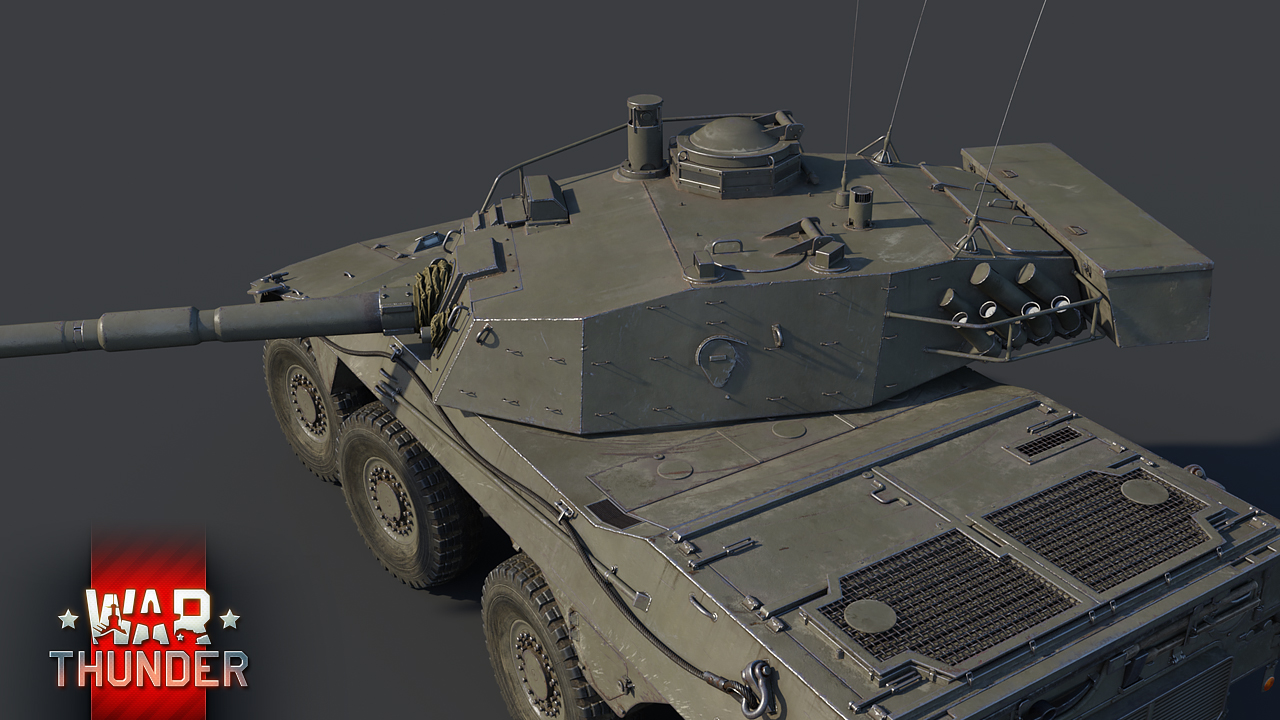 During the mid 1970s, the South African armed forces issued a specification which kickstarted the development of the “New Generation Armoured Car” project. The aim of the project, as the name suggests, was the development of a new heavy armoured car that would replace dated existing designs in the near future.

First test beds were developed in the late 1970s, intended to primarily trial various designs for mobility. At the same time, South Africa was involved in some local conflicts with the neighbouring state of Angola during the mid ‘70s - mid ‘80s, further shaping the development of the ongoing project.

In the early 1980s, having sought knowledge and expertise from German engineers, several prototype designs were built and tested. Among them, the eight-wheeled ‘Cheetah Mk.2’ armed with a 76 mm gun was selected as the winner and was subsequently procured by the South African army. Small scale production began in the late 1980s, with the Cheetah Mk.2 officially receiving the name ‘Rooikat’ after entering service. Following initial limited production runs, mass production commenced in mid 1990, which led to a total of over 240 Rooikats being produced.

In the early 2000s, the Rooikat 76 Mk.1D was developed under a modernisation program, becoming the most modern modification of the vehicle. The upgrade introduced several smaller improvements, such as improved commander optics and number of smoke launchers as well as others. Over 170 Rooikat 76 Mk.1Ds serve with the South African army today.

In War Thunder, the Rooikat 76 Mk.1D will be a new light wheeled vehicle coming to rank VI of the British ground forces tree as part of the upcoming update 1.95. In stark contrast to most other ground vehicles offered by the British top ranks, the Rooikat 76 Mk.1D will bring with it a breath of fresh air, so to speak, to veteran British tankers, giving them the chance to command a highly nimble and no less deadly combat vehicle unlike any other currently found in the British ground forces tree!

Thanks to its heavy-duty outside appearance, the Rooikat 76 Mk.1D will easily mislead many tankers into believing that mobility isn’t necessarily this vehicle’s biggest strength. However, the truth is quite the contrary - weighing in at 28 t and being powered by a 567 hp engine allows the Rooikat to reach a new record top speed of 120 km/h on roads, making it the fastest vehicle in War Thunder! Therefore, don’t be fooled by its looks

Another aspect of the Rooikat 76 Mk.1D that certainly shouldn’t be scoffed at is its 76.2 mm cannon. Despite most of its opposition fielding some formidable high-calibre cannons, it would be ill-advised to underestimate the firepower offered by this gun. Featuring similar ballistics as the 76mm cannon found on the Italian OTOMATIC, tankers will find the fully stabilised GT-4 cannon of the Rooikat 76 Mk.1D just as effective and easy to use, with the exception that you won’t point it at airborne targets as often and that it’s not assisted by an autoloading mechanism. On the other hand, dispatching of hostile armour certainly won’t present much of a difficulty thanks to the use of a powerful sub-calibre round, especially when coupled with wide flanking maneuvers, of which the Rooikat is most definitely capable.

However, as with most vehicles of this type, the Rooikat 76 Mk.1D too suffers from the same downsides - namely, a lack of protection. Featuring only 30mm of armour at its thickest points, the Rooikat 76 Mk.1D certainly won’t be able to effectively absorb any sort of incoming enemy fire going above heavy machine gun calibre. As such, aspiring commanders of this machine will definitely need to use the superb mobility of their machine to get out of harm’s way and literally outrun bullets before they’re even fired at them!

Commenting is no longer available for this news
Rules
Wolf_89
30

This was unexpected. Good to see UK is getting something with speed :)

Oh yeah, nice. The africans are bringing some speed into the Uk.

Shadoukoa, Hold on, don't get this wrong! I just realized....

First the Vickers, now this? Awesome to get much needed speed in the British tree.

Oh cmon, no one yet? https://www.youtube.com/watch?v=FTQbiNvZqaY (Toto - Africa)

*drums*. Its Gonna take a lot to pull aaaaaway from you (italians), but its nothing 100 mp/h couldnt ever dooooo" Sorry Stona, but I'm gonna have to take some time to play these new things we never had!

Xtanol, Xtanol you missed out this line: you/I best the Italians down in Africa,

Gentlemen you had my curiosity ... but now you have my attention.

For a moment, i tought its the Radpanzer...

As an South African, This makes me happy : )