The Isuzu-class was a group of four frigates built for the JMSDF in the early 1960’s as a replacement for older vessels in service at the time. Soon, Captains will have the opportunity to take command of this Japanese Cold War-era vessel, arriving on War Thunder as part of the upcoming update 1.95 “Northern Wind”!

Briefly: The predecessor to the familiar Chikugo frigate, featuring a more powerful weapons arsenal and a larger crew complement. 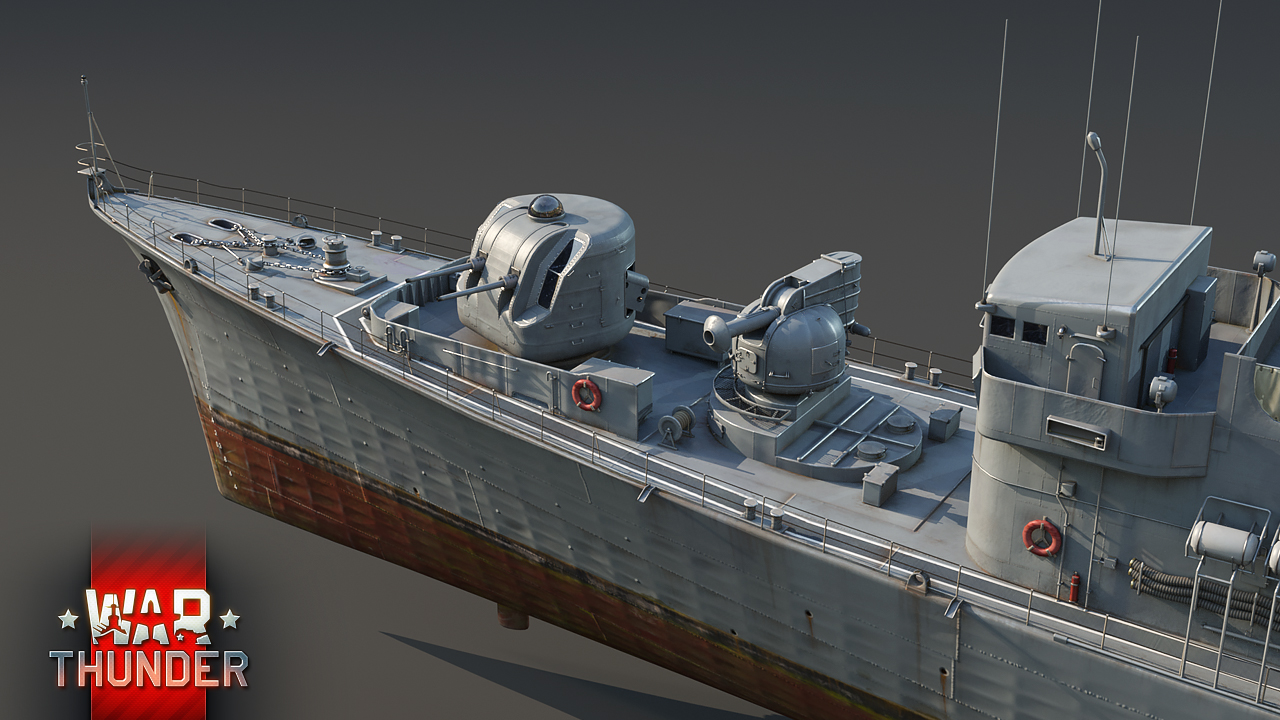 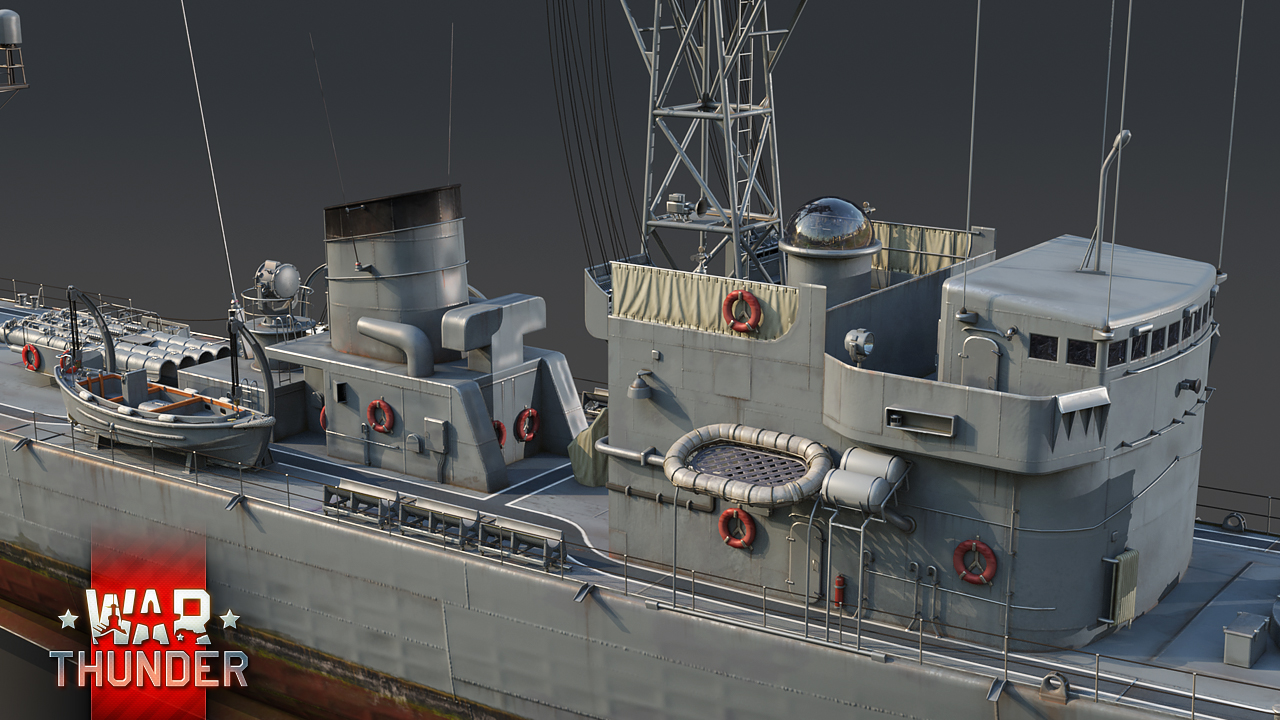 During the late 1950’s, the Japanese Maritime Self-Defence Force (JMSDF) was planning on expanding their destroyer fleet with a number of new ships intended to complement the recently modernized destroyers leased from the US Navy. However, these plans were revised shortly afterwards due to the JMSDF realizing that their frigates in service at the time, as well as being older leased US vessels, were starting to show their age and were getting ever closer to their planned retirement, scheduled for the early 1960’s.

As a result, development of a new frigate began in the late 1950’s, eventually resulting in the creation of the Isuzu-class. The first two ships of the class, Isuzu and Mogami, were laid down in April and August of 1960, respectively, while the remaining two ships, Kitakami and Ōi, were both laid down in June of 1962.

The first batch of ships entered service with the JMSDF in 1961, with the other half being commissioned in 1964. Ships of the Isuzu-class served faithfully with the JMSDF until they were decommissioned in the early 1990’s, also serving as a base for the development of its successor design - the Chikugo-class - shortly after their introduction.

In War Thunder, the frigate Isuzu will appear in rank II of the Japanese naval forces tree with the arrival of the next major update coming to the game. Unlike its direct successor - Chikugo, a familiar vessel to some sailors - Isuzu is an older design, but one that offers enhanced firepower and survivability - traits that will most certainly be welcomed by many captains!

On its firepower - Isuzu features a similar primary armament arsenal as the Chikugo, although doubled in quantity. As a result, Isuzu offers its aspiring Captains access to four 3’’ (76mm) rapid-fire cannons, spread across two twin turrets - one on either end of the ship’s hull. Furthermore, captains will also have a single, centre-mounted quad barrel 533mm torpedo launcher at their disposal

However, unlike Chikugo, Isuzu doesn’t offer any sort of secondary weapon system to back up the main guns, disregarding the torpedo armament, of course. This means that future captains of this ship will need to be extremely cautious of the sort of engagements they take part in and maintain a high degree of situational awareness, given that they will be required to keep an eye out and manually engage targets, both on the surface and in the air. Fortunately however, the primary guns do offer a wide selection of ammunition choices, giving you the necessary flexibility in battle.

Another important improvement the Isuzu offers over its more modern counterpart concerns survivability. Thanks to its slightly larger size allowing for the accommodation of 18 more sailors on board compared to the Chikugo, Isuzu’s total crew count is therefore brought up to 183, inherently making it more capable of absorbing battle damage and offering overall greater resilience as a result.

Despite these differences, Isuzu and Chikugo share neigh identical performance figures when it comes down to mobility, with both ships being able to reach a top speed of 26kts (48km/h). Therefore, captains eager to command the newcomer Isuzu will likely feel right at home with the new vessel if they’ve already gained some experience behind the wheel of Chikugo.

Isuzu is arriving soon to rank II of the Japanese naval tree with the release of the upcoming War Thunder update 1.95 “Northern Wind”, and will become available to all Captains. In the meantime, be sure to stay tuned to the news for all the latest information surrounding the next major update coming to the game in the near future. Until then, calm seas  and happy hunting, captains!

Commenting is no longer available for this news
Rules
_Yukari__Akiyama
19

When will we get a non-sleep devblog?

When will people stop crying?

Jakob_Norz, when something interessting will actually get a devblog

I mean, the Graf Spee was cool IMO

WHAT?! Really, another ship barley anyone is going to play! Is this update supposed to be about Sweden or what

This update is about Sweden mostly yes, however its also about filling and expanding existing areas of the game which is something people constantly ask for.

Yeah, it will probably cost more RP than their top rank Heavy Cruiser. Honestly, I don't get why those RANK II boats are so expensive

Cat_Clan_Leader, It's been explained many times. Naval tree is different from the others that it's Horizontal. It's like the right most ship is the top tier of it's type. Going down the tree is just moving from one type to another (like going from PT boat to Destroyer to Cruiser). Going Right is getting the better ships of that type.

Ranks 1-4 also exist. People constantly ask and remind us to fill important gaps along trees and when we do that, the issue then becomes we are not focusing on the top enough. Whilst you may not personally find this "for you", every update, this sort of thing is what people ask to see. Not always just "new shiny top toys".

Smin1080p, I don't play boats, and I'm not sure if I ever will, but I'm all for filling out existing tech trees and closing huge BR gaps.

Glad i have a fireplace to keep me warm. While i wait :) But at least i will have my Swedish Air force to play with :D

a n o t h e r _ s h i p, it's only been the fifth one after all right? can we expect the Japanese to get something that is not a boat? and the French to get anything at all?

Yes indeed! A n o t h e r _ s h i p. They are one of the newest classes of vehicles in game and we are filling the gaps in existing trees too as well as developing higher rank content for them also.

Smin1080p, " it's the newest class of vehicle in game, we are filling gaps in trees and developing higher ranks" every man of common sense interstands that, but the French and Japanese tank trees, are not exactly new, yet they are still completely underdeveloped. both have a single decent mbt, and are getting good tanks slowly (no modern mbts since 1.79 and 1.89 respectively while america had 7th abrams last patch), Both nations have great potential, please fill gaps and add content where it's neeeded.

Sure, have another heavy twin engine fighter for Japan :D

BeriY_, To be honest with you. At least i would prefer another twin engine fighter for Japan then another Ship. But that's just me.

there are mate, especially enduring naval.

Abe_Le_Musketeer, Yea, like you and eeeerm these 7 other guys. Naval is literally the lest played part of War Thunder and so far this update seems like it's more Naval and Sweden if anything

"" But that would require Work and effort "" to be done to the Japanese tec Tree high teir Props,Jets and Tanks, Thats to much to Ask

Waiiit a minute It has a 375 mm M/50 (yeah, swedish) rocket launcher, why is it said it has no secondary armament?

@Miltaccfd Its actually the US MK.108 ASW Rocket Launcher that uses the RUR-4 Weapon Alpha rocket used on the early versions of this frigate. The M/50 is a quadruple tube rocket launcher used. I was also wondering why it isnt listed in the devblog but it is shown launching a rocket in the video.

Hetzer_Hammer, Lets be honest, even if it is shown firing it, it probably wont be functional like the rocket torpedo launcher on the Chikugo was semi-complete on test server and then was removed on launch

Look at the video... if you look closely... you can see it firing a rocket

Wait a minute.....I see a RUR-4 rocket launcher just behind of the front main turret. Please tell me we can use that aswell!!!