The SAV 20.12.48 was an experimental Swedish SPG, developed by the Bofors company in the postwar years as their first private venture into tank development. Coming soon as part of update 1.95 “Northern Wind”, War Thunder tankers will have the chance to put this experimental design to the test and get a first taste of the Swedish ground forces coming in a future update!

In 1948, Bofors began work on developing a new self-propelled gun as part of a private venture in an effort to realize a long-lasting goal of establishing itself as a manufacturer of armored fighting vehicles, alongside its already proven reputation in arms production.

To do so, Bofors came up with a design for a new SPG, which incorporated a 12cm cannon, whose design was heavily inspired by those used on destroyer vessels, along with a highly effective autoloading mechanism. The design was ready by the end of 1948 and a single prototype was constructed in the following year.

As a result of the lacking interest, the SAV 20.12.48 never went into production. Despite its failure, the project wasn’t a complete loss for Bofors, as some of the experiences gained during its development later found application in other vehicles, such as the far more successful Strv 103. 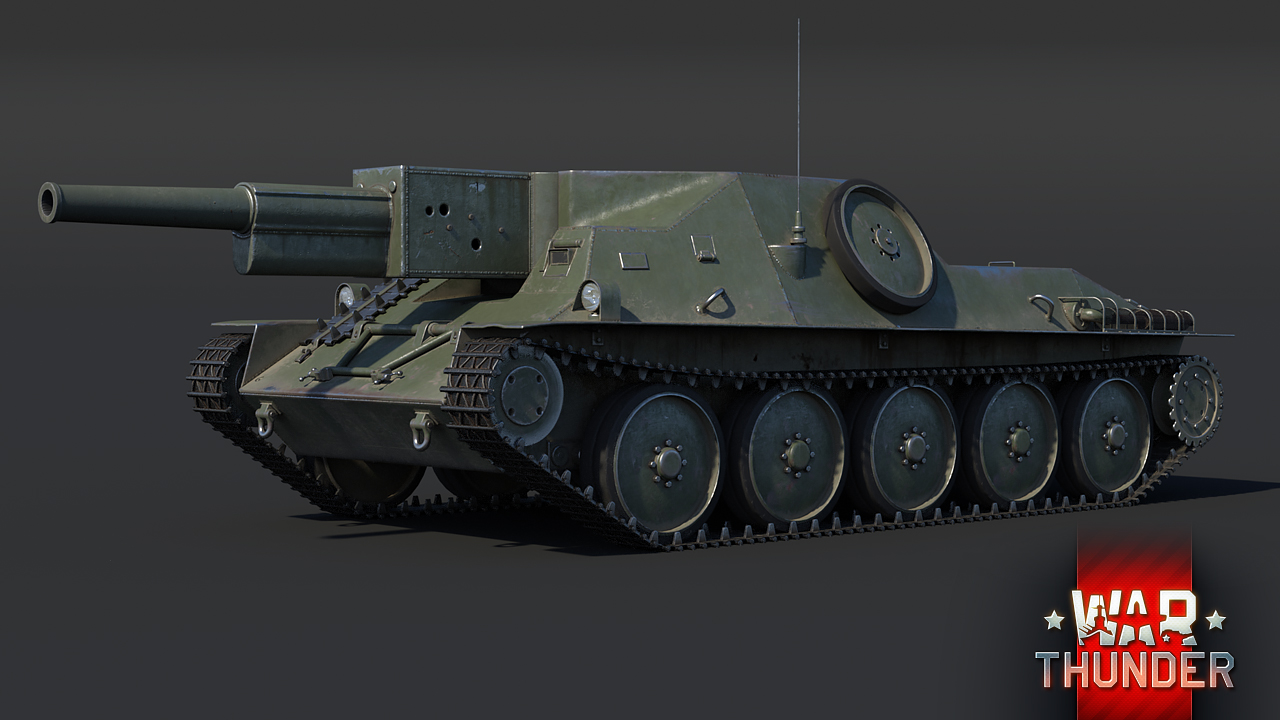 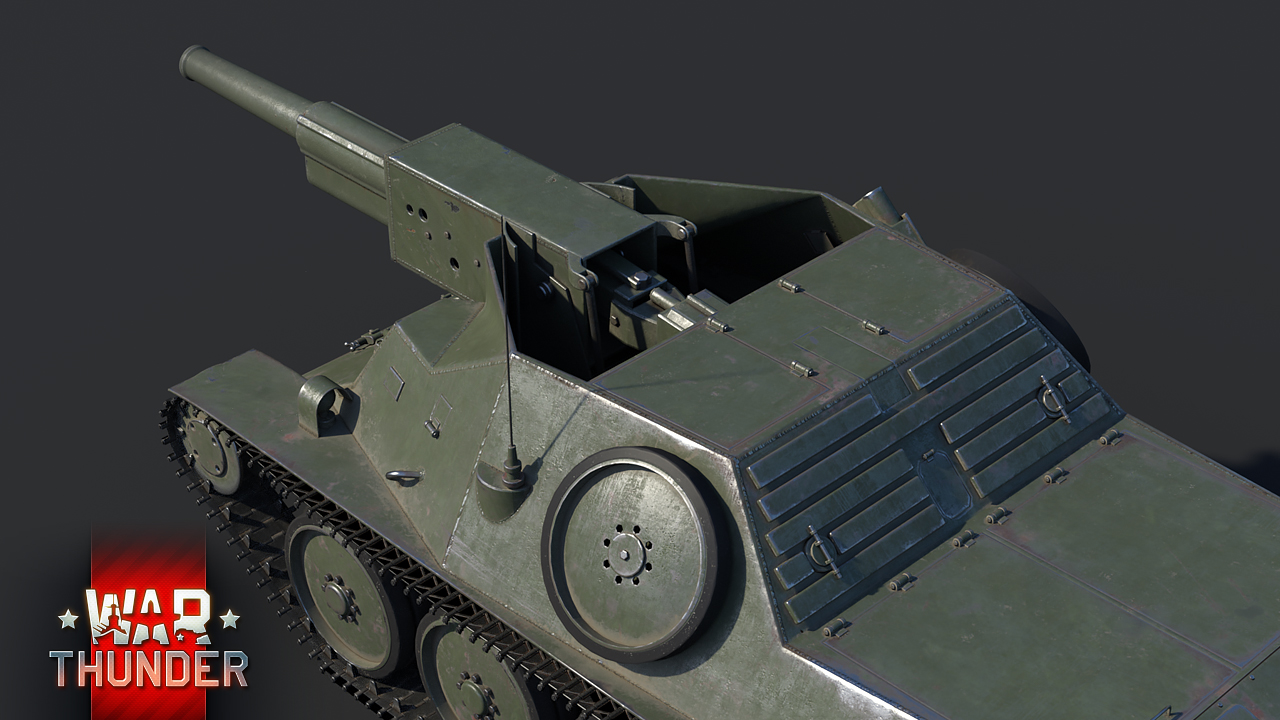 The SAV 20.12.48’s most standout feature is no doubt its massive 120mm cannon, dominantly protruding through the vehicle’s upper glacis plate. Besides the cannon itself being powerful, its effectiveness is further enhanced by the use of an autoloading mechanism, which gives the SAV 20.12.48 a mind-bogglingly fast reload of only 1.2 seconds per shot for the first 6 rounds of each magazine!

While firepower can definitely be considered as the SAV 20.12.48’s greatest advantage, its armor protection is the direct opposite of that. Being protected by only 30mm of armor plating at best, the SAV 20.12.48 is only really protected against low caliber machine gun fire and shrapnell, while anything greater than that might pose a serious threat to the vehicle and its crew’s well-being.

On the other hand, having such light armor does mean that the vehicle’s weight was kept relatively low - at just around 20 tons. This relatively low weight in combination with a 400 horsepower engine gives the SAV 20.12.48 a very good power-to-weight ratio of 20 hp/t, in turn allowing the vehicle to reach a respectable top speed of 52 km/h and even 20 km/h in reverse, under ideal conditions. Therefore, commanders will be well advised to rely on the vehicle’s excellent mobility to keep them out of harm’s way and not rely on the armor to do much of the protection work.

The SAV 20.12.48 can be obtained as part of a special bundle in our online store and will become available to all its prospective owners with the release of the upcoming update 1.95 “Northern Wind”. In the meantime, be sure to stay tuned to the news in order not to miss out on any new information regarding the next major update, coming to the game very soon. Until then, happy hunting tankers!

Commenting is no longer available for this news
Rules
Smazzak
20

MBT ? For Japan ??? Gaijin: Yes we have a new not competitive IJN light cruiser for you to fight the Brooklyn, Graf Spee and Prinz Eugen with lol

What MBT do you think Japan is getting? I mean at this point anything for Japan would be good.

Nomadic_Warrior, a SAM or mach 2 would be awsome

Will we get another devblog today?

Princess_Kiko, even K1A1 or K2 ould be satisfaction :-)

Excuse me?? Again?! The last couple of updates went pretty good for japan if you ask me so your statement of ''left out again'' isn't based on anything! (People that liked your post are also just some wheeaboos)

War_Gaming_RUS, Are you aware that Japan was the only nation that didn't get anything in the previous update? They still lack basic machines to compete with other nations, and what Japan has at the moment is still filled with game breaking bugs while having some of the highest repair costs for no reason. Tank tech tree is filled with RB holes so one can't make decent machine load out for normal battle. Also when Japan gets something, main three nations usually get at least double the amount of better stuff.

We have 3 unreleased Tech Tree in CBT stage. Now, here is a the 4th. Slow down, Gaijin, and finish what you started before! Where are the Japanese helis? Where are the Italian helis? What about the World War Mode? Where is the Tank EC? Why are you don't improve the Air RB EC? Why, Gaijin? Focus! You expand the "arsenal" much more than you improve the game. When we will see real WAR in this game instead of the stupid outdated 16vs16 TeamDeathMatch games?

They said in an interview that Japanese and Italian Helis are planned for 2020. Also Gaijin hasn't made vehicle models since Japanese GF came out (its all outsourced). And there is no such thing as a "finished" tech tree, there's ALWAYS stuff to add. Developers are specialized as well. So people who code vehicles or maps are not the same as bug fixers/QC. They are constantly fixing bugs and issues around the clock but there is a priority list. Leave specific feedback on the forum!

Here's an idea Gaijin. Why don't you dispense with the lip service of providing a comments section that your clearly pay no attention to, and put the personnel wasted on it into service fixing your broken game?

In the future you should make some more salient observations of precisely what needs fixing. Gaijin needs to be led by the hand that way.

Can't see the forest for the trees...that's my guess anyway.

Nomadic_Warrior, It's the build date of the vehicle. It was built in 1948.

I won’t help neither to spam about it in each and every devblog. Have some patience, it might or might not come on this update. If the Japanese playerbase had patience for the Type-90. Surely you guys could have the same patience as them.

we need the T90A now more than ever

What about something for Japan?

Ok ok it is cool, another premium and everything. I just want to see a japanese ''tank'', not sph or useless stuff like that but a proper tank! Last time we didn't get a single thing, at least give us something, man.

Yeh we get that now Twin engine fighters and so forth

well that's nice, but we already knew about it, so can we expect another devblog? maybe something stabilized for the French?even something for Japan perhaps?

Apparently no more devblog today. Bruh moment for sure.

Nomadic_Warrior, what's your source for that? other sources claim another one is coming