The Strv 103, also known as the ‘S-Tank’, is a highly unusual Swedish main battle tank, unique for its turretless design and innovative use of adjustable suspension. Also coming to War Thunder as part of the upcoming update 1.95 "Northern wind", the famous S-Tank will become among the first playable Swedish ground vehicles in the game!

Briefly: A highly unique Swedish Cold War MBT, featuring a compact, turretless design, whose fixed cannon is controlled via the use of the vehicle’s suspension system.

In the immediate postwar years, Sweden began looking for a replacement to the Centurion tanks, then in service with its army. The most straightforward solution was to once again look into the export market for potential candidates, although engineers were already working on a domestic design - the Kranvagn. While this process was ongoing, an engineer by the name of Sven Berge came up with a radical new tank design in 1956.

This new vehicle featured a turretless design with a cannon fixed to the hull, which would be trained onto its targets with the precise use of an adjustable suspension system. The design was based on results from a study on tank crew casualties during WWII and the Korean War, which showed a correlation between tank height and hit probability. As such, the ‘S-Tank’ was kept very small in dimensions and low in profile, while also utilizing some innovative new engineering solutions, such as a mixed power plant consisting of a diesel engine and a gas turbine.

In 1959, the Swedish government approved the construction and testing of two prototypes. In 1960, a pre-production batch of 10 vehicles of the ‘0-serie’ was ordered for field trials, which went on into the mid ‘60s.  Generating more than favorable test results, the vehicle was formally ordered into production and procured as the ‘Stridsvagn 103’.

Despite its original purpose being to replace the Centurion tanks in the Swedish Army, the Strv 103 ended up serving alongside it for a number of decades, until it was ultimately decommissioned in the late 1990s. By that time, 290 Strv 103s were built, spanning over five variants.

In War Thunder, the legendary Strv 103 will come to the game as part of update 1.95 "Northern wind", being also one of the first Swedish ground vehicles to make it into the game! While pilots will get their hands on a few dozen new toys waiting for them in the new Swedish aviation tree, tank commanders who choose to obtain the Strv 103-0 - the pre-production model of the Strv 103 - as part of a bundle in our online store, will have the chance to have a first taste of what the Swedish ground tech has to offer, arriving later as part of a future update. 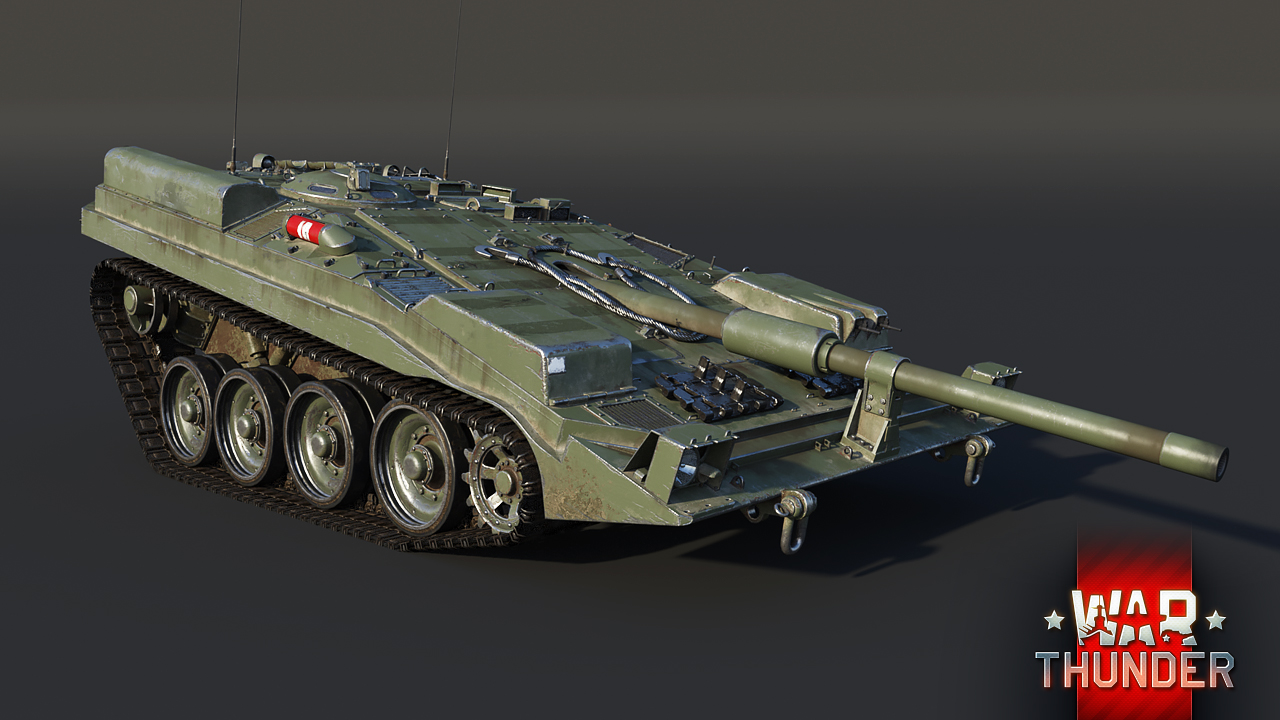 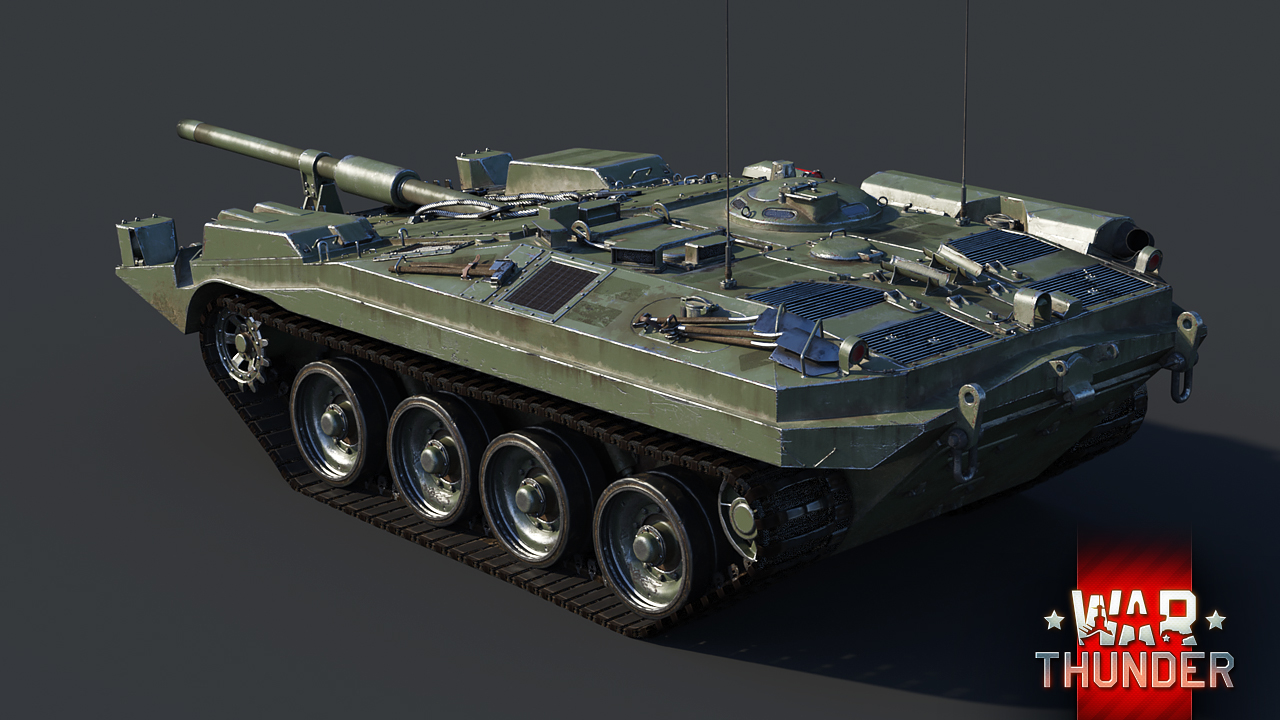 One doesn’t need to look at the Strv 103 for long to realize that this tank will offer its aspiring commanders an experience like virtually no other ground vehicle in War Thunder does. Its unique turretless design, fixed gun controlled by the use of the vehicle’s adjustable suspension and overall good mobility will allow War Thunder tank commanders to experience armored combat in a completely different light than before.

Starting off with the Strv 103’s most iconic feature - its gun and gun handling system - the Strv 103-0 is armed with the Bofors 105mm L74 cannon, similar to the very familiar L7 cannon, and is supported by an autoloading mechanism, giving the cannon the ability to fire every 4 seconds. The ammunition selection includes a wide assortment of sub-caliber and chemical rounds, typical for 105mm cannons of the NATO arsenal.

However, from here on, the Strv 103 abandones all similarities with other western tank designs. Unlike most combat vehicles, the Strv 103’s main gun is fixed in place to the vehicle’s hull and cannot move independently. To make aiming more practical, this turretless tank features hull aiming mode which is enabled by default.

The Strv 103-0 is, much like the rest of the vehicle itself, powered by a rather unique propulsion system. Unlike most other ‘conventional’ tanks, the S-tank sources its power from not one, but two engines. Specifically, the Strv 103 is powered by a 240 horsepower diesel engine as well a 300 horsepower gas turbine, both of which provide the vehicle with power in different circumstances. As a result, the Strv 103 offers good levels of mobility on virtually all terrain types and can reach a top speed of up to 50 km/h under ideal circumstances and even 44 km/h in reverse, giving it one of the best reverse top speeds in the game.

Fun Fact: The Strv 103 was the first combat vehicle in the world to utilize a gas turbine in its power plant.

As far as protection and survivability is concerned, the Strv 103 offers highly situational results in these two areas. Ideally, with the tank being put in a hull down position and facing the enemy forwards, the S-tank becomes extremely difficult to penetrate, thanks to its relatively thin, yet extremely sloped upper glacis armor causing regular armor-piercing rounds to ricochet off harmlessly more often than not. The Strv 103 features a very special and unique duplication of the control panels between driver-gunner and tank commander. When the driver-gunner is knocked out, the tank loses its ability to move and shoot, but only temporarily, as the commander is able to take control much faster than other tanks since the commander doesn’t actually need to change seats. The coolest thing with the Strv 103 is that it is the first and only tank in War Thunder able to move and shoot while having only one crew member alive!

The Strv 103-0 can be obtained through the purchase of a special bundle in our online store and will become available to all its future owners with the release of update 1.95. In the meantime, keep a close eye on the news for more information regarding the next major update coming to the game very soon. Until then, happy hunting tankers!

Owners of the pre-order packs will get access to the Swedish ground vehicle tech tree research in future.

Commenting is no longer available for this news
Rules
Rubbry
70

For anyone scared of never being able to play the S-tank behind a paywall, remember that this is a earlier version. The Strv 103-C will most likely be in the regular tree. Although I am also looking for a confirmation of this.

Wait, you actually read article? I thought everyone only look at pictures these days :) Yes, there will be more 103 in Swedish tech tree. Regular tech tree.

Stona_WT, My biggest hobby is swedish military history Stona. I got your back as long as you give me a meatball or something c:

I think making a pre-production version a premium is a VERY GOOD choice of Gajin! That way we can have an attractive premium for the players that want to pay Gajin for keeping the game alive and running. While we also have a (or more) production version(s) for all players to enjoy.

T4FR, Well let's just hope there are multiple S tanks on release, to not only make this premium worth more to the consumer, but to not also make it necessary to be competitive.

I won't spend any cent on Swedish vehivle

Ok, but there's people that will buy it, so pls don't share your negative opinions

Did you not even read the devblog before you decided to cry in the comments? There are many variants of the 103, this is clearly stated the 103-0 PROTOTYPE. There are 3 production variants of the tank that we will most likely also see in the game in the normal tech tree. get your shit togheter, ofcourse there are going to be premiums, and sweden hasnt made that many tanks that would fit this br and rank, id like to see you come up with a better idea for a t5 premium

FsAviX, How much does Gaijin pay you guys to white knight for them in the comments? I'm starting to see a lot of your kind around here, and knowing how shady they are, I'm pretty sure you work for them.

There will be more versions, for sure

“as the commander is able to take control much faster than other tanks since the commander doesn’t actually need to change seats.” Most of the modern MBTs feature this too, will you implement it to them? Nice dev blog!

Trigg3rHippie, I believe he his referring to that of the Hunter Killer system found on many MBTs, that allows the commander to override or designate targets for the gunner.

Hopefully it won't have its adjustable suspension bugged for years after it's release like Japanese machines had and some still have to this day.

oh it will, except it's much worse. the vt-1/2 can't aim with it's tracks, and it only relies on the tracks for one plane of aiming. about 40% of the time it wiggles back and fourth instead of putting the gun on target. and now you're relying on the tracks and the suspension to both WORK? ain't happening. it'll probably work right about 25% of the time

I'll empty my wallet for you, Oh mighty Gaijilla!

Agent0029, You know, this is one of the few premiums which surprisingly enough isn't Pay2Win or OP in any way, shape or form compared to recent premium vehicle announcements (Ka-50, Prinz Eugen). Aswell as beeing a rare or unique variant of a vehicle which will be found on the regular tech-tree. So yes, I will support them by buying this vehicle and not the others, so they can see what I do care about

Now that's how you make my money go away. :)