Sendai was the lead ship in the last class of Japanese 5,500 ton light cruiser designs to be built in the interwar period. Being one of the final light cruisers to be commissioned by the IJN before the outbreak of WWII, Sendai will soon steam into battle once more with its arrival in War Thunder as part of upcoming update 1.95 “Northern Wind”!

Briefly: The last in the series of Japanese 5,500 ton light cruisers, featuring improvements to anti-air protection and torpedo armament. 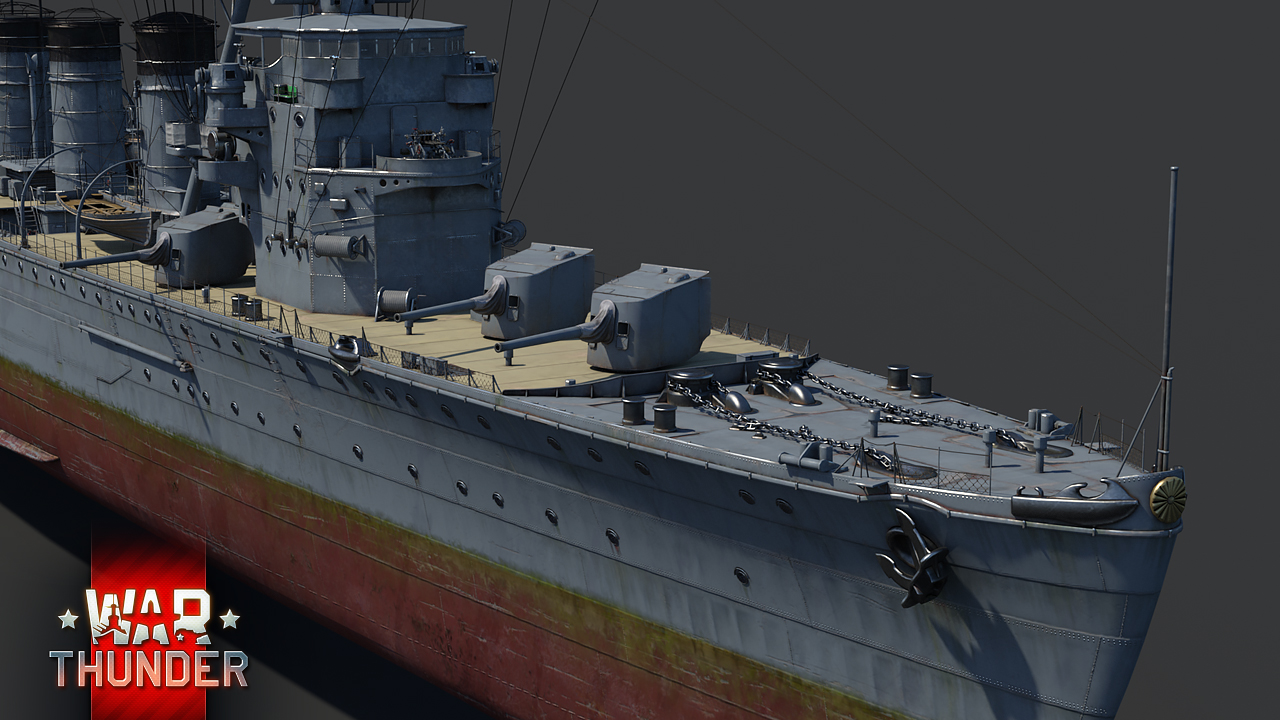 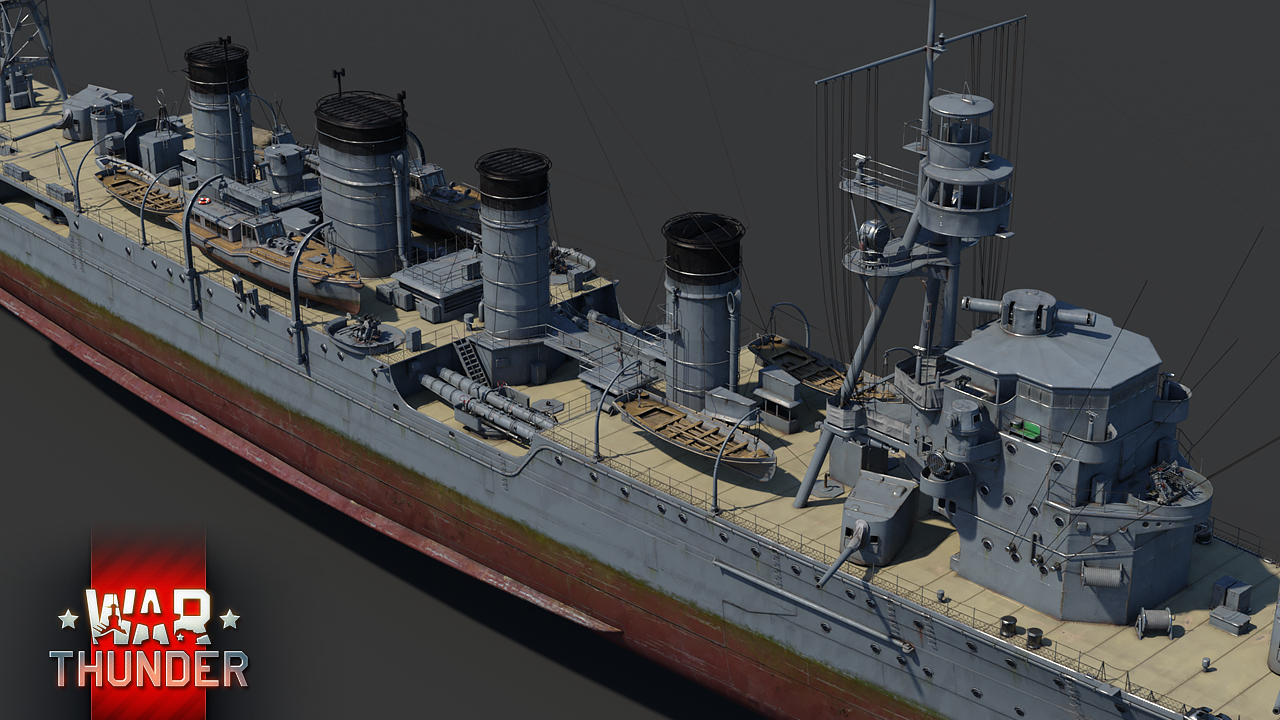 The Sendai-class of light cruisers were a further development of the preceding Nagara-class, which itself was the successor to the Kuma-class. All ships of these classes were part of the Japanese 5,500 ton light cruiser design conceived in the years following WWI, with the Sendai-class being planned as the final ships to be based on this design.

To this extent, initial plans foresaw the construction of 8 vessels of the Sendai-class, however, with the signing of the Washington Naval Treaty in 1922, Japan was forced to cut back on these plans. This resulted in 4 ships being cancelled and one being broken up on the slipway, while the remaining ships did in fact see completion.

Sendai, as the lead ship of her class, was laid down in February 1922 and saw completion in April 1924. With the outbreak of hostilities in Asia in the late 1930s, Sendai took part in the Second Sino-Japanese War, participating in the Battle of Shanghai and providing support for Japanese land units.

During WWII, Sendai’s early war service mostly consisted of escorting convoys around Malaya and Indochina while the ship also formally took part in the Battle of Midway, though not actively engaging Allied forces.

Sendai saw the height of her service career during the Solomon Islands campaign, taking part in both naval battles for Guadalcanal. Roughly a year later, in November 1943, Sendai was involved in the major naval battle of Empress Augusta Bay. There, Sendai would meet her fate, being heavily damaged by concentrated gunfire from four US cruisers, sinking on the following day on 3rd November, 1943.

In War Thunder, Sendai will be a new light cruiser coming to rank IV of the Japanese naval tree with the release of the upcoming update 1.95 “Northern Wind”. Being a further development of the same design on which the already familiar Kuma light cruiser is also based on, Sendai offers its aspiring Captains improved anti-air protection as well as a more powerful torpedo armament, while maintaining the light protection and excellent mobility of its predecessor.

Similar to its predecessor, Sendai is fitted with a primary armament consisting of seven 140mm cannons, six of which are capable of firing simultaneously on each side. On one hand, this does allow seasoned Kuma Captains to easily transition over to Sendai, without needing to worry about gun performance differences or changes in firing angles. However, on the other hand, Sendai also inherits the same drawback from Kuma’s armament layout, meaning that one cannon will always be unable to line itself up with the currently engaged target.

Unlike Kuma however, Sendai offers its aspiring commanders much improved anti-air protection. This comes in the form of an increased AA armament consisting of two double 25mm cannons, one quadruple and 13mm heavy machine guns as well as two single rifle-caliber 7.7mm machine guns. Furthermore, Sendai is also fitted with four double torpedo launchers, with two on either side of the ship’s hull. However, unlike Kuma’s torpedo launchers, these have been upgraded to launch the deadly 610mm Type 93 torpedo, making Sendai’s torpedo armament a considerable force to be reckoned with.

Being based on the same design as previous ships, Sendai also received the same levels of protection as found on Kuma, meaning that Captains can expect the best armor to be found at the belt, being 63.4mm in thickness. In addition, due to overall design similarities and displacement, Sendai will also feature comparable mobility to that found on Kuma.

Sendai is expected to dock in War Thunder with the arrival of the upcoming update 1.95 “Northern wind” and by doing so, will become available to all players as a new Japanese rank IV cruiser. In the meantime, keep scanning the horizon for more news to out what the next major update has in store for you. Until then, fair seas Captains!

Commenting is no longer available for this news
Rules
sargeanthashhash
25

agree this isent the draken

mavve2442, or any thing Japanese that's not a plane or tank

Great move Gaijin. Sendai was really the right choice when we already had the Kuma as the worst CL of Naval. Please keep the bias out for once and bring an actual ship with actual AA refit for IJN instead of this barely-better Kuma.

The Kuma is not a bad cruiser or the worst in the game... that honor goes to the Dido.

Fungusar_DK, Have you tried both? Dido has better RPM, actually useful AA shells, has significantly better AA protection, more or less same fragility and is stable compared to Kuma.

Lurking_Eyes, "The definition of insanity is doing the same thing over and over, but expecting different results" - Albert Einstein.

no thanks. the t80u is enough cancer

r750r, t80u is cancer but 4 abrams and everybody else having 90's MBT's but russia, but nah the t80u is the one that is cancer sure

Look at those 3 guys over there are so happy about new light cruiser Japan is getting, woohoo ! I can't understand why they keep adding vehicle to a a mode occupied by bots or a vehicle no one asked for. And adding a light cruiser right after those heavy german ones, and when people asking for more japanese tanks, is just a big middle finger to the players....

Skelezig, They have a point, why add Graf Spee if you don't have anything of similar caliber for other nations. This is the problem with this game, they keep adding more powerful things to one or two nations but forget the rest for half a year or more, then those nations get similar powerful things, but at the same times the other nations get something even more powerful, there is no balance. We had SAMs in the game for a year, some nations still don't have them, same with helicopters etc.

I dont care about naval stuff but i respect it and those who like them. But now... show us what is going to be the end of the swedish grind. Let the speculations be over. Or just show a T90A.

I mean, T-72B should be coming first, but yea I agree that Russia needs the T-90, since every other nation (except Japan) has it's main real life modern tank

IlustriousKnown, No.... Germany still has the Leo2A5 and not the 2A6 with the L55 gun and improved hull protection (they also still have the DM33 as best round ingame and not DM43)

Wow, more canon fodder for the 5.7s. It's no wonder that you jumped straight to selling top tiers when it comes to cruisers. 5.0 and 5.3 are just there to get farmed in most of the matches, with your game design. I also like how you brag about improved AA then proceed to list a few peashooters that will do nothing. I'm guessing only the top tier p2w premium that you will inevitably sell will be the only IJN cruiser allowed to have AA that's worth a damn.

Agreed. I don't even enjoy playing the actual ships in this game but i lol'd hard at that "improved" AA lineup. Its almost as good as some of the 3.0 US patrol boats.

Nice ! but can you give any hint on when a dev server could be released ?

Ouiche, This week end I'd say