The update is coming really soon, and it is time for us to get hands on with a top tier aircraft of the Swedish lineup. Say hello to the SAAB J32B Lansen jet fighter, which will be available in two variants - a strike aircraft and an interceptor. 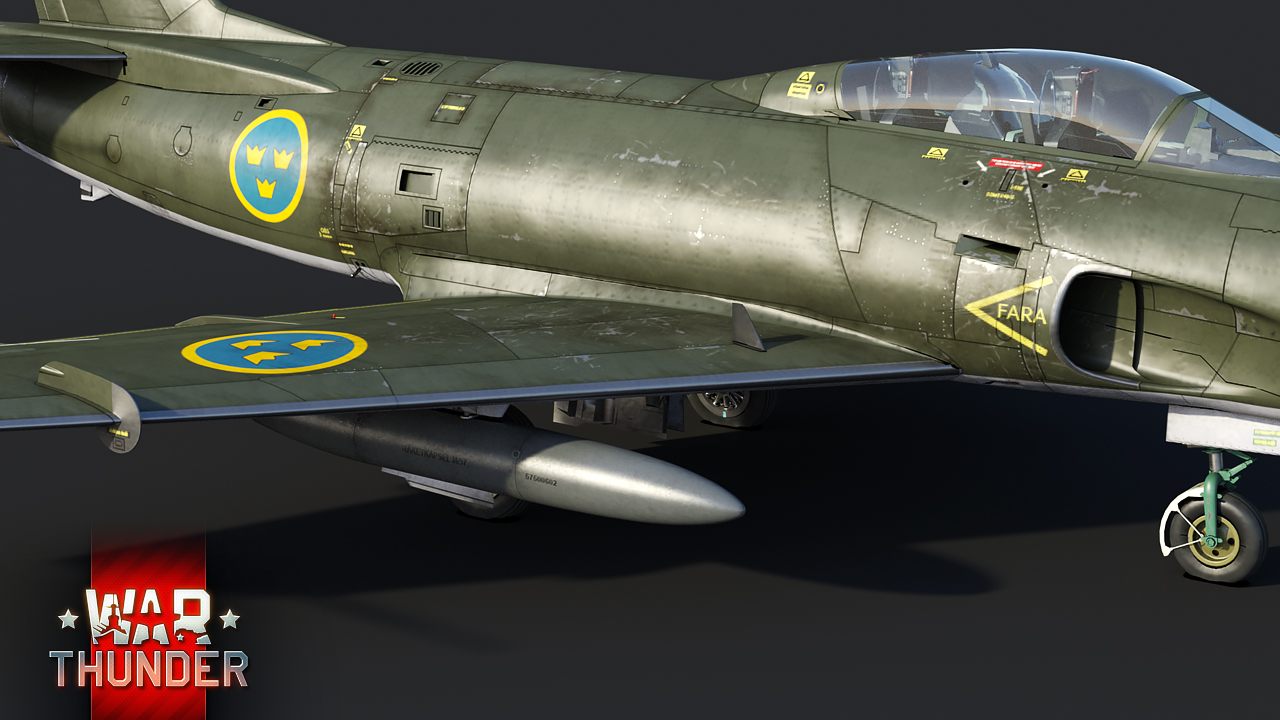 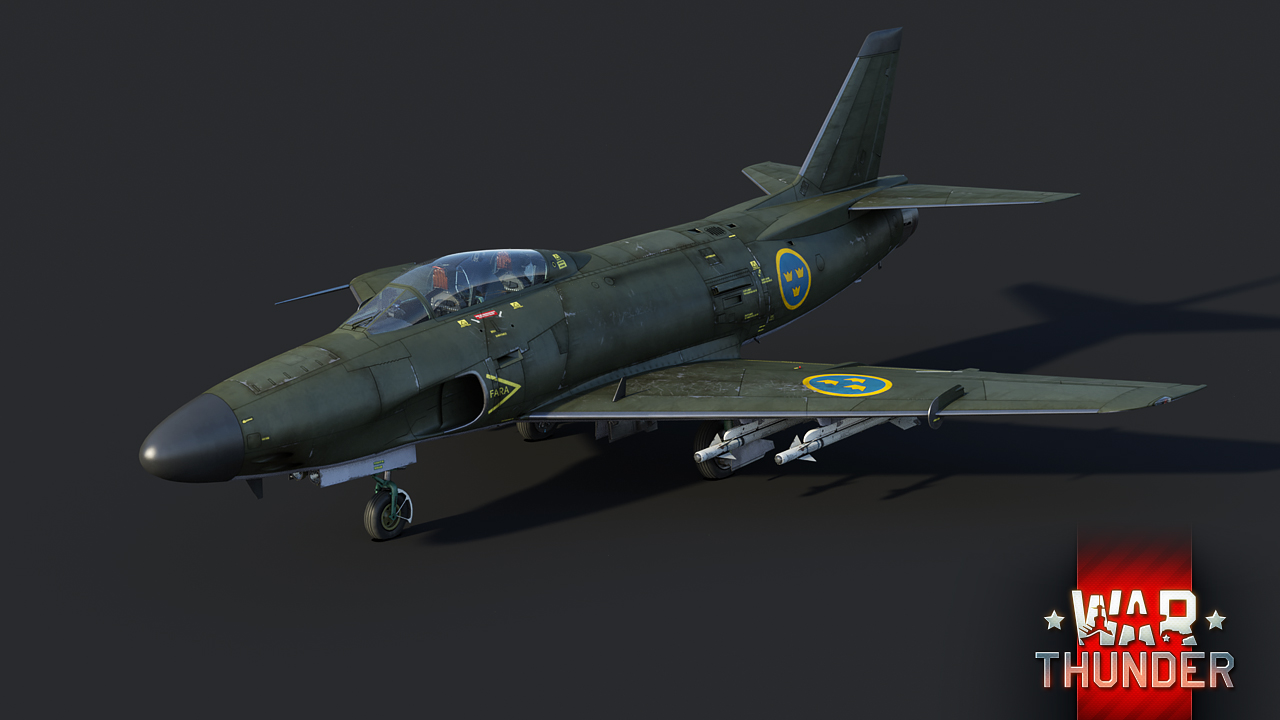 Sweden has always been aware of current trends in military aviation. When all the leading military producers realized the undoubted superiority of jet engined aviation over piston aircraft, Sweden also began developing its own aircraft with a new type of engine. The project for the new combat aircraft was conceived as a replacement for light bombers and ground attackers from the WWII period, so the project started as an attack fighter. Since the production technology of proprietary engines in Sweden did not develop as fast as needed, the first aircraft of the Type 32 project were equipped with licensed copies of the British Avon engine with a Swedish afterburner. The jet strike aircraft under the A32 A designation was mass-produced in Sweden from 1955 to 1958, and was a completely modern combat aircraft of this class. The aircraft was equipped with a quick-fire battery of course weapons of four 20mm guns at the front of the fuselage. As it should be a ground attack aircraft, the A32 A Lansen featured a rich arsenal of outboard weapons distributed over 12 suspension points under the wing: various bombs (up to 600 kg each), up to 24 unguided rockets of various calibres, including 12 anti-ship APHE missiles, or a couple of anti-ship Rb04 guided missiles with an active radar homing system.

At the same time, a fighter-interceptor version of the Lansen was being developed, the first such aircraft took to the sky in January of 1957. The J32B fighter was noticeably different from its attack aircraft sister, primarily with a more powerful engine and specific weapons. The power plant here was also a licensed copy - this time the Avon Mk.47A engine with a Swedish afterburner, which was capable of delivering 2000 kg more thrust compared to the A32 A engine. The new engine also required geometrical and design changes in the air intakes and the jet nozzle. The interceptor received more powerful course armament - four 30mm cannons, copies of the British Aden. There are only four suspension points for further armament, but there is a possibility of installing air-to-air missiles - the US made AIM-9B Sidewinder. However, to work on ground targets, a fighter could also take rockets into battle. The Swedish Air Force ordered 120 of the J32B, this model remained in service until 1973, along with more modern supersonic fighters.

In our game, J32B will become, by the time of the release of update 1.95 “Northern Wind”, the top fighter aircraft in the Swedish tech tree, and will occupy rank VI. As an interceptor, this aircraft surpasses most of its neighbors at its BR in terms of fire capabilities, and only slightly inferior to them in speed (and even then not to all). Indeed, the J32B is not capable of crossing the sound barrier, although it does closely approach it with a maximum speed of 1145 km/h. At the same time, the aircraft has good control, has an air brake for sharper maneuvers and, of course, excellent weapons. 4x30mm guns provide dense, well-controlled bursts with clear and simple ballistics. In addition, on board we have “Sidewinders” - a very rare and pleasant bonus for an aircraft at the entry to rank VI, which means that we can potentially do anything with any air target at almost any speed! While the heavily armed A32A is by far the best choice for mixed battles, the J32B is a genuine air hunter, and this aircraft is a great master of its craft!

J32B - one of the best sub-sonic fighters in the game - will appear in update 1.95 “Northern Wind” very, very soon. Stay tuned!

Commenting is no longer available for this news
Rules
Naughty_Lolita
18

What a beauty <3 Thank you Gaijin so much.

It would be nice if we saw a Sweedish map with the caves/mountain tunnels they used as hidden runways to take off from,. I guess the traffic jam of spawning maybe an issue however? Or is it Gajin?

prepare to be disappointed when u attached pods on lol

Remember, this is a dev blog; don't complain about the game here, and don't beg for vehicles! That's not what the development blog is for.

Put a sock in it. Your sanctimonious admonitions only fuel more contempt. Gaijin is quite capable of "policing" its own blog without the self-righteous interference of kiss asses and fanbois.

ZGB33, Watch out ladies and gents, someone just found out about thesaurus.com and thinks they're very smart

The retards won´t understand, they will still do that buddy. Because they are retarded.

DaveSchilling, Thats not very nice, we do have special needs players in game, next time, please choose better ways to berate someones post. I thankyou, not.

Is there a possibility that we will see the Draken in the near future?

An early cold war Czechoslovak SPAA? That sounds too specific to be added anytime soon.

Ah, my man, you must've missed the announcement. Italy was added over two years ago.