Built in 1914, the Novik-class destroyer "Bystry", which was later renamed as the “Frunze,” became one of the best combat ships of the Russian Empire. The Frunze made it through the First World War, the Russian Revolution, and the Allied Intervention, and she also participated in the Second World War, where she defended the USSR. Meet the new destroyer in War Thunder!

The Novik-class series, which includes the Frunze, comprised of the most modernized destroyers among their class in the Imperial Russian Navy. This combat ship was laid down in Kherson in 1913 and received the designation “Bystry.” Following six months of construction, the destroyer was finally launched and soon allotted to the Black Sea Fleet. In 1918, the destroyer was captured during the German occupation and later, passed into the hands of the Anglo-French interventionists. She was then taken out of commission during a retreat and was only able to join the armed forces ranks under the soviet flag in 1927. The destroyer joined the Second World war under the designation “Frunze.” In the war’s summer of 1941, the ship was tasked with setting up minefields in the Black Sea and escorting convoys of transport ships. She also defended Odessa during its siege. On September 21st, the Frunze was attacked by the seasoned I Group pilots of the StG 77 wing during her attempt to rescue the Krasnaya Armenia gunboat bombed by Junkers aircraft. The Stukas performed numerous group raids on the destroyer, which resulted in the ship getting hit by several 250 kg bombs and consequently sinking. 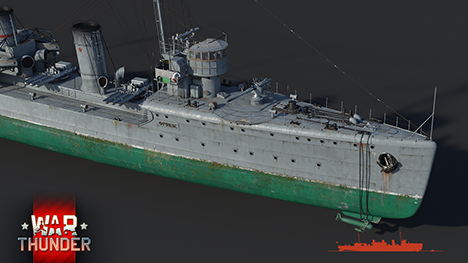 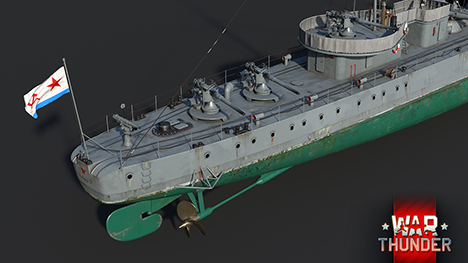 In War Thunder, Frunze will appear at rank III of the Soviet naval fleet tech tree. In terms of design, number of compartments, water displacement, and speed, the Frunze is in the same league as the other destroyers of the same type in the game. The ship has average mobility (her maximum speed is 32 knots) with good survivability, and she is also quite well armed.

However, the destroyer’s defenses are nothing to write home about: her primary armament is not protected by turrets, her armoured shields barely cover the gun crew, and the two large-calibre machine guns are pretty much the only anti-air armament she possesses. Looking on the bright side, the Frunze has much better things going for her in the primary armament department. Her primary armament comprises four 102mm guns with a good rate of fire and researchable shrapnel ammo. Her secondary armament, which consists of one 76mm gun placed at the stern and one 45mm gun located on the rear superstructure, should help you take care of smaller targets and aircraft. In addition to this, the Frunze is fitted with three three-barrel torpedo launchers.

This ship will be the first destroyer that Soviet Navy commanders will be able to pilot for now. We plan on including this ship in one of the upcoming fleet updates. Make sure you keep an eye on our news!

Commenting is no longer available for this news
Rules
Marinejeger
7

I'm excited to see what else will be added in future updates! Keep up the hard work!

From WW1 too, the Russian Revolution into WW2. This ship has carried the Russian navy throughout the 20th century. Хорошая работа тов. https://www.youtube.com/watch?v=lDQ7hXMLxGc

So Farragut devblog next?

Its name and 4.0 BR are already in the game's code.... (its image and stats aren't though)

onewhosaysgoose, Stats were in game and model wes added day before yesterday.

If you are thinking the same F2P game as i do, then i disagree. Most importantly they have the Battleships and we don't.

F1GHT_4_W4iFUs, i have to agree with OP, the detail is lacking, plus that game doesnt have any small boats which WT has, even though naval is still in CBT

sorry this was a typo

Still waiting for the IJN destroyers to arrive. But good to see more ships being added

I would like to know why is france left out for naval forces? I get that Germany,the US and the USSR are your priorities (and that japan and the UK will be next ) for now but france dont even have a subforum for naval forces : (

Good question. I know france had some very good battleships! and destroyers. I too wonder why