Condottieri A-class light cruisers were the first Italian cruisers to be built after the First World War. In the 1930s, these heavily armoured scouts were designed in response to the new French destroyers; the Jaguar, the Lion, and the Aigle. With an excellent maximum speed of 37 knots, the Italian light cruisers also boasted much more powerful armament and 24mm belt armor. The primary armament included eight 152 mm guns (four turrets with two in each), as well as six 100 mm long-range cannons, two twin 533 mm torpedo tubes and mines. The anti-air armament comprised two 40 mm autocannons and eight large-calibre Breda Mod 31 13.2 mm machine guns in four twin mounts. 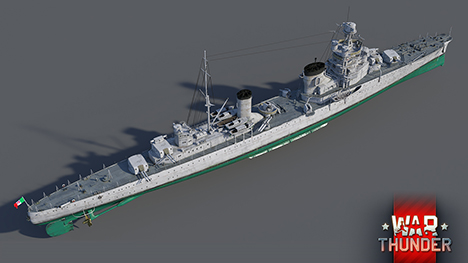 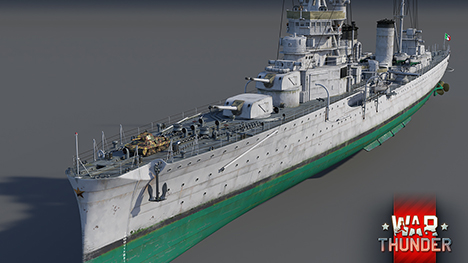 For War Thunder, we have recreated one of the cruisers from this illustrious series, the Bartolomeo Colleoni, named after a famous Italian condottiero from the 15th century. The ship was built in 1931, and at the start of the Second World War, she formed the 2nd Cruiser Division in the 2nd Squadron together with the other “condottiero” cruiser in the series. Deployment highlighted serious navigability issues, which meant that the light cruisers were unable to chase down enemy destroyers, and the armour and survivability of the “condottieri” was markedly lower than that of standard cruisers. Nevertheless, the Italian light cruisers developed the idea of the first French light cruisers and created a new concept of ships of this type in global shipbuilding, with subsequent light cruiser projects using the experience of the Italian engineers to improve their designs.

A British light cruiser, HMS Enterprise was put into service in 1926, becoming the second and last E-class (Emerald) combat ship in the British Crown's forces. The light cruisers in this series were conceived as mobile and relatively well armoured ships for conducting reconnaissance among squadrons of battleships, escorting convoys, and leading groups of small mine and torpedo ships. Based on these objectives, particular attention was paid at the design stage to the light cruisers' seaworthiness. In fact, E-class cruisers became some of the fastest cruisers of the time, though by the start of the Second World War they were showing their age in comparison to the naval fleets from other nations.

HMS Enterprise served in the Royal Navy until the end of WWII. This light cruiser has a rich history of exploits and adventures – she served in Shanghai during the disturbances in 1927, participated in the emergency evacuation of Prince Edward from Africa, and transported troops to Hong Kong and the Malay Peninsula. With the outbreak of the Second World War, HMS Enterprise was assigned to the Northern Patrol, where besides protecting British ships, she also transported incredible numbers of gold bars. She later participated in the Norwegian Operation, just barely escaping German torpedoes, and escorted a shipment of British fighters to Malta. She attacked French ships in Mers El Kébir, hunted German raiders in the South Atlantic and Indian oceans, was active in the Persian Gulf, and rescued seamen from the Cornwall and Dorsetshire cruisers sunk by Japanese aircraft. The light cruiser survived fierce battles with the squadrons of the Kriegsmarine along the French coast, she attacked German coastal defenses during the Allied Normandy landings, and provided artillery support for forces advancing across France. Throughout her lifetime, HMS Enterprise travelled the globe, fighting the French, the Italians, the Germans, and the Japanese. 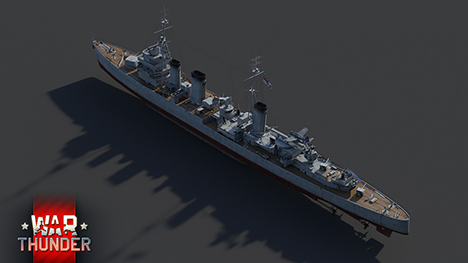 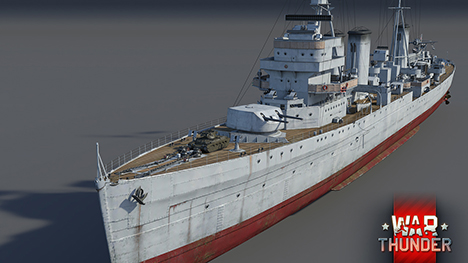 What set the Enterprise apart from her sister E-class ship, was her experimental mount for two large-calibre weapons. The Enterprise light cruiser can reach 33 knots and has good armour up to 3“ (75mm) around the engine and boiler sections, 2” (50mm) of belt armour, and 1” (25mm) hull side and deck plating. The cruiser's main armament includes seven 6” (152mm) guns, two in a twin turret and another five in single mounts. HMS Enterprise's auxiliary armament consists of three 4” (102mm) weapons for anti-air defense, two quadruple 40mm anti-air guns, six twin and six single 20mm mounts. In addition, the cruiser also has two twin torpedo racks and a simple release rack for depth charges.

The first two models of light cruisers presented are the British HMS Enterprise, an Emerald-class light cruiser, and the Italian Giussano-class light cruiser Bartolomeo Colleoni. The HMS Enterprise is capable of speeds up to 33 knots, boasts good armour, and is armed with seven 152mm main cannons, as well as anti-aircraft cannons, machine guns, and even torpedo tubes. The Bartolomeo Colleoni is slightly faster at 37 knots and surpasses the HMS Enterprise in armament, as it offers eight 152mm main cannons plus six additional 100mm long range cannons. Its protective capabilities, however, are considerably weaker, with only up to 24mm of hull armour in comparison to the 75mm offered by the British ship. Captains of the Bartolomeo Colleoni will also have to keep an extra eye on the sky, considering the noticeably weaker anti-air defense compared to the HMS Enterprise. The latter, however, still remains susceptible to attacks from daring torpedo bombers, given that the British ship will need more time to maneuver than the faster Italian.

In War Thunder Naval Battles, light cruisers are well placed at distance from smaller enemy vessels, as in such conditions, they can inflict severe damage to the enemy fleet while sustaining fire even from two destroyers simultaneously. In close combat, armour-piercing shells can deal devastating damage to light cruisers, and they always need to keep an eye out for enemy torpedo boats sneaking dangerously close. Played strategically, light cruisers protected by destroyers and patrol ships will be able to assert dominance over an entire sea sector, securing strategic positions and blocking enemies from advancing through an area of strategic interest.

You have to be logged in for posting comments
iNimitz
16

Gaijin, you have made the superior Admiral happy. I'm ready to bombard the enemy into submission!

We are glad that you are happy ^^

which will hopefully never come, because they would make torpedoboats 98% usless

OFW_Schroedinger, Torpedo boats are a mistake since the start. I'm sure they'll find a way to keep them useful when they implement BBs though.

Raise the anchor, turrets to port side! FIRE!

Shouldn't it be the USS Enterprise? #StarTrekJoke

DarthBaras13, DarthBaras13 USS Enterprise were and are US aircraft carriers.

I wonder when we Might see another Japanese Ship/Boat, Maybe some time 2020

OrsonES, you forgot the TM xD

This is great news, I can't wait for one day to be able to have giant battles like in Battlestations Pacific or maybe have huge combined battles of Iwo Jima and Normandy with all 3 forces!

Battlestations Pacific was a really good game and i hope the combined battles like it can be seen.soonTM

Not going to lie they could look at Battlestations Pacific and implement some things from it.

so good and tasty, can it launch some Spaghagetti for me?

only cannelloni. Didn't you read the name.

i hope to see some french boat/ship later since there hasnt been any so far : (

Why would you want a boat/ship that only carries white flags?