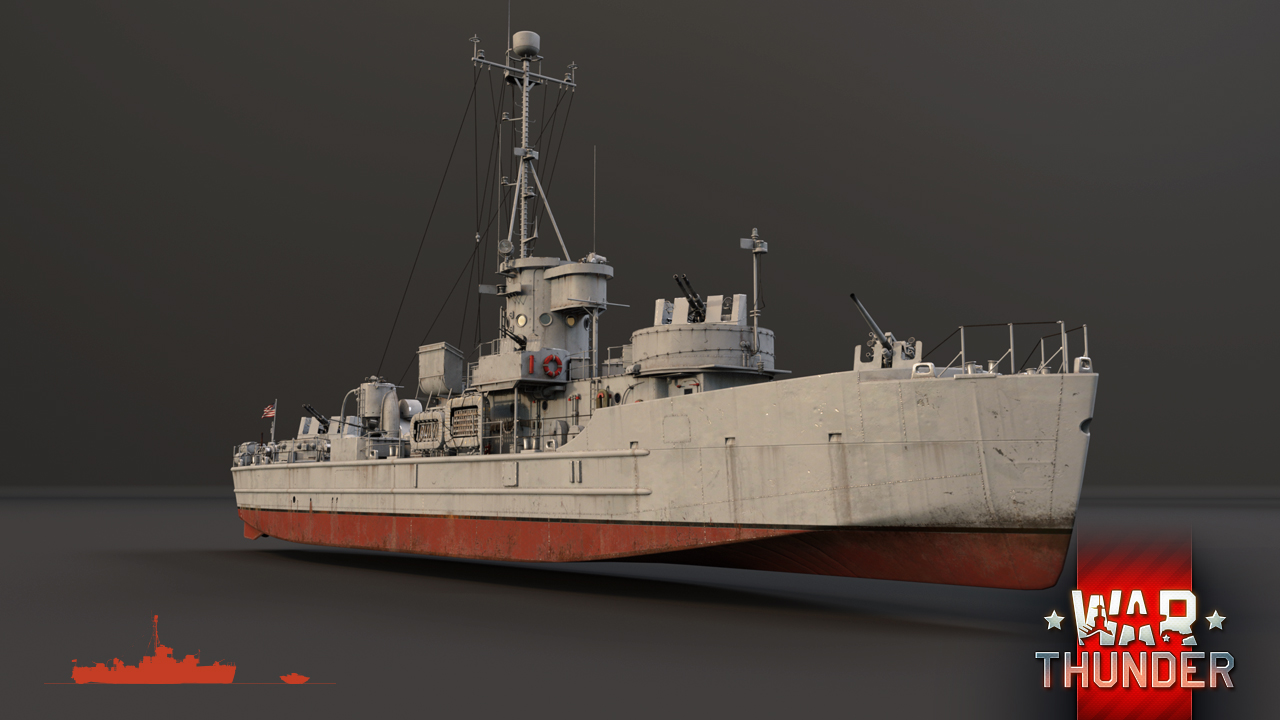 In short: an American artillery vessel available in the navy closed beta test. Armed with a 76 mm cannon and an excellent set of auto cannons, her dense fire literally chews up small ships and aircraft!

Artillery support ships of the LCS (L) landing craft support class received the amusing nickname “Mighty Midget” due to the impressive firepower they could release on enemy shore fortifications.

During World War II, the American military took a big gamble on landing naval infantry and armour – the Americans used the strategy of quickly capturing coastline using landing ships in all three theaters of war. The landing ships and boats themselves had light armaments and could not fully cover their marines during landings, so the question arose about the creation of a small maneuverable gunboat with enough firepower to support naval landings against enemy infantry, lightly armoured fortifications and fire positions. The LCI (Landing Craft Infantry) designs were used as a basis, with the addition of a 76 mm gun with an armour screen, two twin 40 mm cannons and four twin 20 mm machine guns. The powertrain remained the same as on the LCI – two sets of four engines with 225 hp each, with a total power output of 1800 hp. The artillery ship’s maximum speed was 16 knots. The gunboat was designated LCS (L) – Landing Craft Support (Large). It took just 10 days to prepare such a ship from the landing platform. It could escort its landing party and support it with fire along the coast, and work as an anti-aircraft vessel or provide a smokescreen for the actions of larger ships. The LCS gunboat’s baptism of fire was in the battle for Okinawa. It was later used in operations on the Pacific Ocean. After the end of World War II, the US used these ships in the Korean War and Vietnam, and provided them to allies. 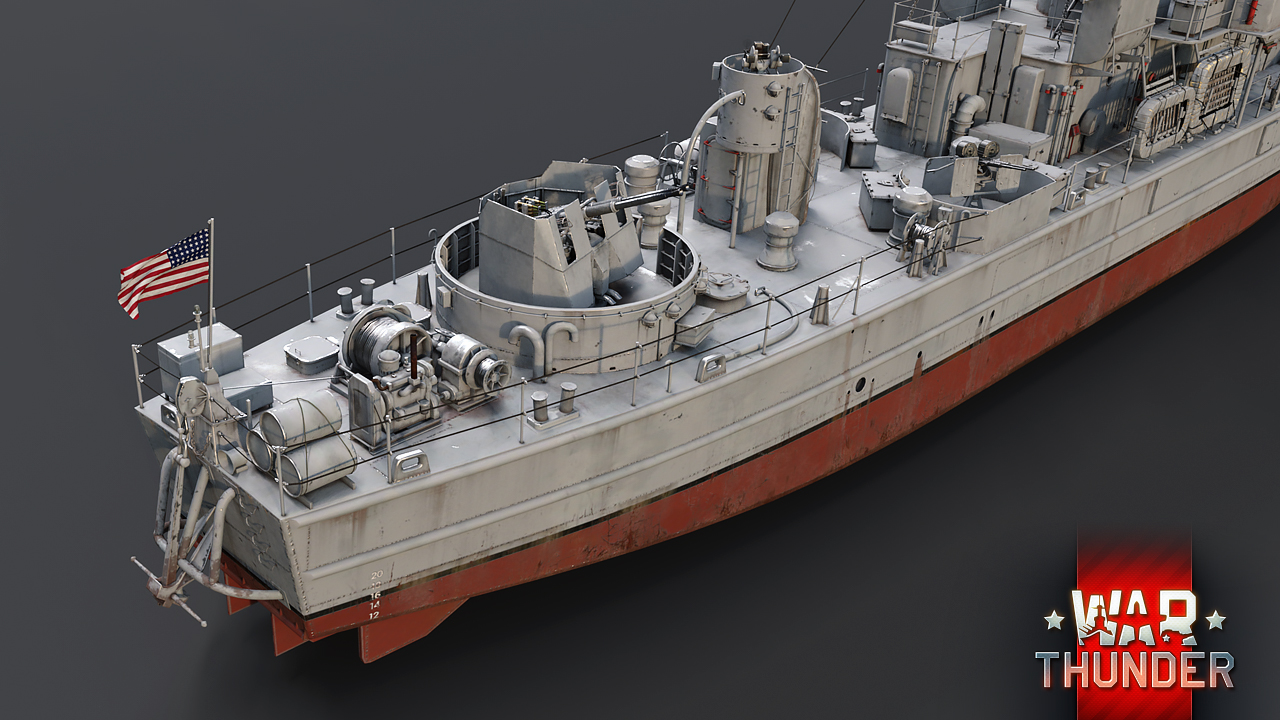 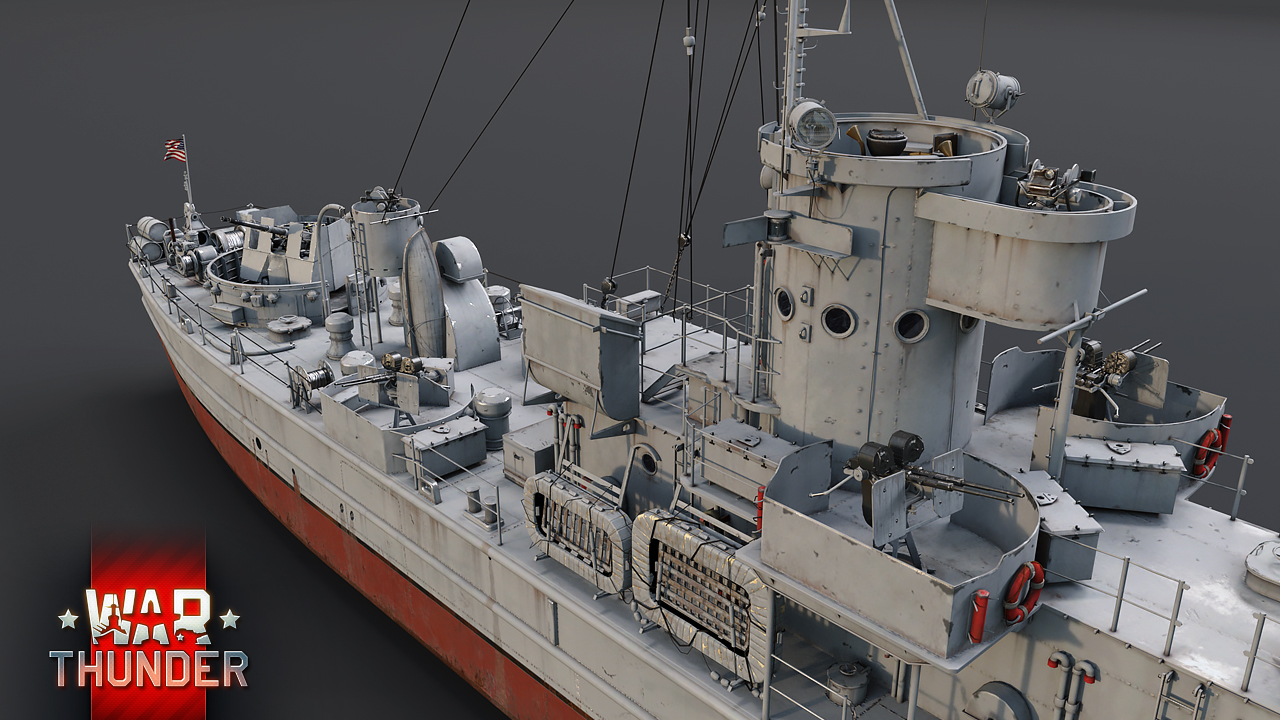 In our game, the LCS (L)(3) gunboats will be available to all participants of the War Thunder navy closed beta test at rank II in the American naval tree. In comparison with most other small ships and boats, the LCS has a lower speed and no torpedo bays or depth charges. This ship’s main feature is its hurricane of firepower – at short ranges, the LCS can release a true storm of shells of various calibres on the enemy. The ship’s main destroyer is its 76 mm cannon on the bow, which has fragmenting high-explosive shells and armour-piercing shells, and incendiaries with a radio fuse. The 40 and 20 mm cannons are very effective against enemy aircraft, and of course, they can easily take care of weakly defended enemy boats.

Fun fact: the LCS ships were nicknamed “Mighty Midget” during World War II for their excellent battle characteristics in suppressing coastline resistance. In fact, the later versions of the LCS, with missile platforms, are considered the most heavily armed vessels per ton of displacement ever built by the US.

Your Mighty Midget is waiting for you in the dock, commander! The closed beta test is just around the corner!

Commenting is no longer available for this news
Rules
TankSniper001
6

(I know it stopped being funny 5 years ago, but) it's coming soon. Devs are focusing on post major update fixes while working on the CBT, we should get a clearer picture in the near / nearest future. We can't give you a definitive date yet, depend of plenty of things (testing and so on).

Ouiche, Thats a good and solid answer. Thank you your a great mod.

those ship do not like to be called "Midget". they prefer the word "little vessel"

I love anti air boats, show us the ferries!

We got something a bit derpy in preparation, follow the news ;)

Ouiche, Does this happen to include a German ferry with a few 88mm and 20mms?

Its a baby battleship.....soo cute

Good to see the smaller vessels will get some love too.

I am looking forward to CBT!. I hope it will come soon