Briefly: A German purpose-built anti-aircraft barge equipped with a fearsome combination of light and heavy AA cannons, ideally suited for blowing your opponent out of the sky and water alike!

Conceived as a makeshift landing craft intended to be used for the planned naval invasion of Britain, the Siebelfähre was a modular German transport barge, often equipped with heavy weaponry, tasked with assisting landing troops. Aspiring captains will have the opportunity to command the intimidating Siebelfähre in the upcoming closed beta testing of War Thunder’s naval forces!

The Siebelfähre was designed by Friedrich Siebel, owner of a lesser known German aircraft manufacturing company bearing his name. Siebel’s idea was to provide the German army with a much needed easily mass-produced and effective transport vessel for the planned invasion of Britain.

His ferry would be a construction utilising parts of bailey bridges and pontoons, which would make up the two barges connected with each other in a catamaran style by a wooden deck. The vessel was supposed to be powered by aircraft engines and could easily be disassembled and reassembled thanks to its modular construction, allowing for the vessel to also be transported by land.

The idea was met with great enthusiasm from the German military and an order for 400 of these ferrycraft soon followed. The order encompassed more than just one version of the vessel, however. For instance, some versions were specialised to perform anti-air duties and were meant to cover the landing troops from air attacks. These were equipped with light 20mm and 37mm AA guns up to the heavy FlaK 88mm cannon, depending on the version.

However, before all 400 vessels could be made, the Invasion of Britain was cancelled and thus the need for the Siebelfähre also disappeared below the waves. Nonetheless, around 200 of these vessels were still made before the order was cancelled and a majority of them found use in transport and mine-laying operations in the Black Sea and the Mediterranean. The Siebelfähre saw use right up to the end of the war and some vessels continued serving well into the 1960s as civilian ferries. 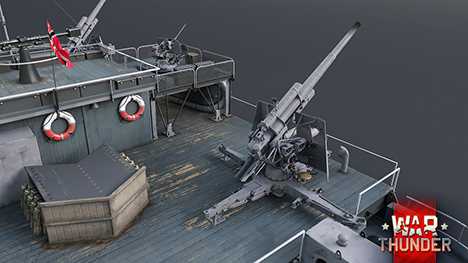 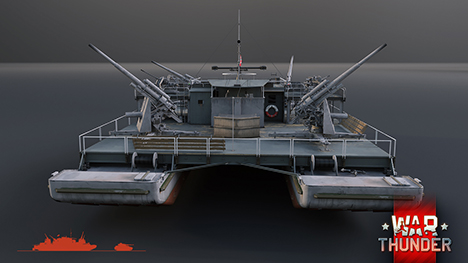 In War Thunder, the SF 40 will be one of the starting vessels of rank I that aspiring captains will have the chance to unlock in the closed beta testing of War Thunder’s naval forces.

In contrast to the numerous fast and sleek vessels found on this rank, the lumbering SF 40, with its displacement of 160 tons and maximum top speed of 16 km/h, isn’t exactly what some would call a speed demon. Instead of taking advantage of high speeds, the SF 40 relies on its low speed and large size to trick the enemy into thinking that it’s just a harmless small island. Jokes aside though, the SF 40 is a force to be reckoned with, despite its low speed and agility.

Being essentially two barges connected in a catamaran fashion, the SF 40 offers excellent seaworthiness and is a more difficult target to sink than the average MTBs found at its rank. In addition, the SF 40 is operated by a crew of 47 sailors - the largest among the German rank I vessels. Having such a sizable crew at this rank allows the SF 40 to take more damage in combat and keep on going, compared to other vessels.

However, neither speed nor survivability is the true highlight of the SF 40 - that honor goes to its firepower. Equipped with a primary armament of four fast firing 88mm FlaK 36 cannons, shooting high explosive shells, the SF 40 can virtually blast a torpedo boat out of the water with even one well aimed salvo. However, due to the arrangements of the guns as well as their somewhat limited traverse speed, captains will rarely have the chance to bring all four guns to bare and track a target for too long. This means that aspiring commanders of this vehicle should make sure to seize every firing opportunity they get, as even one direct hit will be enough to cripple the enemy to such an extent that he won’t be able to recover before the second salvo leaves the barrels. 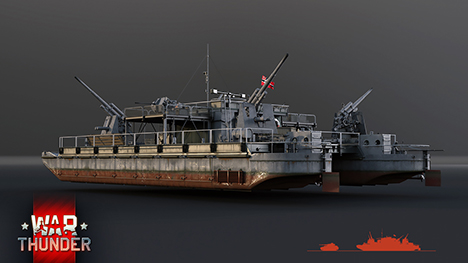 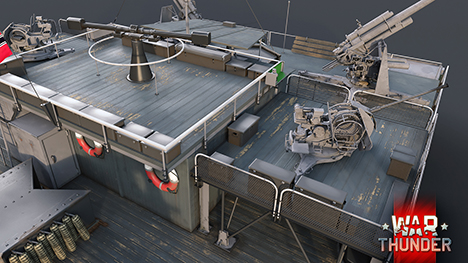 Complementing the ferocious primary armament are two single 20mm anti-air guns, positioned on top of the SF 40’s superstructure. These may come in handy at protecting the SF 40 from aerial threats as well as fast moving enemy vessels at close range. However, if you feel like they don’t quite do the job as well as you want them to, you may use the 88mm cannons once more against aerial threats as well. Simply load the time-fused AA shells, aim… and watch a burning pile of scrap metal splash into the water in the distance. It’s a sight you won’t get tired of that soon, believe us.

Closed beta testers of War Thunder naval forces will have the chance to be among the first to experience the devastating firepower of the SF 40 very soon. Until then, calm seas captains!

"Simply load the time-fused AA shells, aim" Let's hope Flak-truck could use this feature soon too, could be fun to see :)

Now this is cool, unusual and different. It's good to see a variety of different vessels to play. What other interesting vessels could gsijin add to the game? I'm sure there is lots.

Ouiche, Theres also the case of the cargo ship Troubador that during the PQ 17 Convoy to the USSR arranged his cargo of Sherman tanks in the deck to use its turrets as defensive weapons agains German raiders.

Germany is getting hydrofoils. These are also going to be very cool.

drive the flak bus on there

Good luck with this against light cruisers and destroyers...

Rank one to be exactly. Cruisers are rank IV.

This "ship" will (very probably) fight at low BR. Guns are great but the low speed and open deck limit the ship potential.

I don't know if this name of the vessel is correct, it might very well be, I am no historian, but is at least sound wrong to me as a German. I think it should either be "Schwere Siebelfähre SF40" or "Siebelfähre SF40 Schwer".

hey gaijin now when you gonna release naval battle to open beta? it's been 2 years and i can't wait anymore

Dude, the CBT hasnt even started yet....