Briefly: A heavily modernized light cruiser of WW1, equipped with a primary armament of four B-1K 180mm single cannons, backed up by a plethora of secondary guns and torpedo launchers.

The Krasny Kavkaz is a Soviet light cruiser of the Svetlana-class, which were initially laid down before WW1 for the Imperial Russian Navy, but saw completion and use under the Soviets. Captains will have the opportunity to try out the Krasny Kavkaz in one of its WW2 retrofits in the closed beta testing of War Thunder naval forces!

The Krasny Kavkaz or as it was initially named, the Admiral Lazarev, was a ship of the Svetlana-class light cruisers, laid down in 1913 for the Imperial Russian Navy at the Russud dockyard. The ship’s construction went according to plan through the duration of The Great War(WW1) until the outbreak of the October Revolution in Russia in late 1917 caused construction to cease, with the ship being just above halfway completed.

After capturing the mostly intact ship, the Soviets decided to complete its construction and renamed it to Krasny Kavkaz in late 1926. The ship was completed to a modernized design, changing its initial layout and armaments significantly, in order to meet modern requirements. After more than two decades, the Krasny Kavkaz was finally commissioned into service with the Navy in January 1932 as the most advanced Soviet cruiser of the time.

The ship’s career was already off to a bad start however, as only months after leaving the drydock, she suffered severe damages to the bow after colliding with another light cruiser. After her bow was extensively rebuilt, she made several visits to ports in Greece, Turkey and Italy in 1933. Prior to the German invasion of the USSR, she underwent one more retrofit, which greatly increased her anti-aircraft armament.

The service life of the Krasny Kavkaz during WW2 was defined by her involvements in numerous Black Sea operations, most notably around the coastal cities of Odessa, Sevastopol, Novorossiysk and the Kerch peninsula. However, she also took part in various other missions, including convoy escorts, troop transport, fire support and many more. After Stalin forbade the use of large naval vessels without his personal consent in 1943, Krasny Kavkaz saw no further action, marking the end of her wartime service.

After WW2, Krasny Kavkaz was converted to a training ship in 1947 and was later used as a target ship in 1952, before being sunk by an anti-ship cruise missile. 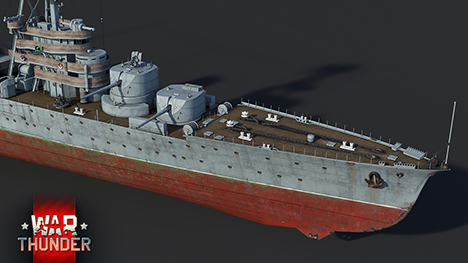 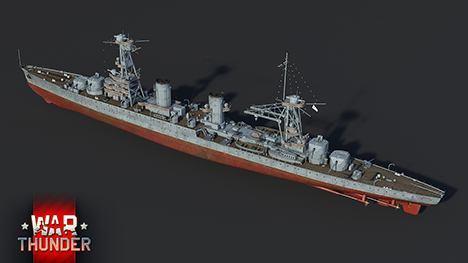 In War Thunder, the Krasny Kavkaz will be the first Soviet light cruiser that participants of the naval closed beta testing will have the chance to steam into battle with! Unlike other ships of the same class already present in the game, the Krasny Kavkaz features an odd combination of neigh heavy cruiser firepower combined with light cruiser levels of protection and mobility.

The feature that stands out most on the Krasny Kavkaz is its unusual primary armament. Namely, the Krasny Kavkaz is equipped with four 180mm cannons, spread evenly across the ship in single turrets. As these cannons are larger than the usual caliber of guns found on light cruisers, captains of this vessel can, on one hand, expect to deal a lot more damage to their opponents, but on the other hand, should also be vary of longer reloads and the limited number of guns available.

To complement the primary armament, the Krasny Kavkaz is also equipped with six dual 100mm secondary battery guns, located mid-ships. Due to their dual purpose nature, these guns are capable of both engaging surface targets as well as enemy aircraft. However, the 100mm guns are not the only thing keeping the Krasny Kavkaz safe from surprise attacks from the air and smaller vessels. To aid with this task, the Krasny Kavkaz is also equipped with two single 76mm, two single 45mm, ten single 37mm cannons, two single and two quad 12.7mm high caliber machine guns. Apart from this blistering array of guns, the ship also has the capability to launch torpedoes off to each side of the hull, thanks to four triple 450mm torpedo launchers.

Fun fact: For her combat actions, the Krasny Kavkaz was awarded the elite Guards title, making her one of only a handful of larger Soviet navy warships that did so.

In terms of mobility, the Krasny Kavkaz manages to reach a top speed of 29 knots (54 km/h), thanks to the 55,000 horsepower that its turbines manage to produce. The armour protection of the Krasny Kavkaz is also comparable to similar ships already present in the game, but has a more advanced structure  - with 76mm of belt armour and conning tower protection, and another 20mm forming the deck armour.

The Krasny Kavkaz awaits new captains in the closed beta testing of War Thunder naval forces, so don’t wait around for too long - raise the anchor and set course for battle. All hands to battlestations!

Commenting is no longer available for this news
Rules
the_suztown
10

As Lord_of_Sofa mentioned, it really should be classed as a heavy cruiser as it meets the definition of one for both the Washington Naval Treaty and the London Naval treaty. The only reason the USSR called it a light cruiser is because they never signed the things.

igeticsu, She would be a Light cruiser if she still had the 130mm guns, but thanks to the installation of the 180mm guns that raises her to a heavy cruiser, Same deal as the Mogami which was a light cruiser until it was upgunned

You must be new here. The Russian company that makes this game has always had a Soviet bias. Hence a Heavy Cruiser being called a Light Cruiser. That way the Soviet cruiser is the best you can get

I'm honestly don't give a damn about soviet ships, where is the Imperial Japanese Navy?

Very Nice i like it! i was asking we need new sinking animation for the ships, is it possible?

why? maybe the ships could also break in two pieces, but other than that, it can't get much better atm

Zahltag, yeah that would be cool,i mean ships really sinks too fast, go ahead and try

We have a lot of content under development, i'm sure we'll have more variety at some point. In time!

Ouiche, Gaijin Help the Dutch and Belguim players with building the IS-7 tank we have no time at all to assemble it/ to get all the parts cuz we have also work and not 24/7 WT play time, like many other players they could buy the parts they have needed on the Gaijin Market but we can't because of these stupid lootboxes.and this what you guys have to say about it?!?! If you move to another EU country (except for Netherlands), you can update location in your profile and have access to market again.

I hope Gaijin would ditch the original idea of crew system soon. We've a lot of discussion in our CBT forum about that and simply several Destroyer AP will not kill hundreds of personnel on a ship. Hope to see more development on Naval Soon ^^

im pretty sure you dont have a bloody clue how too Naval Battle if u cant take down a Cruiser i soloed 3 cruisers in one fight seeing Destroyers are glorified Torpedo boat sim pretty sure you are retarded and cant do the maths or even aim right so why are you even bothering instead you wanna whinge about the crew system instead of GETTING GUD!

GoonyGooGoo, I'm pretty sure you don't have a bloody clue what kololz is talking about. Kinda a rude reply for not even realizing he's talking about the fact that, realistically (as in IRL to avoid your poor misunderstanding mind), a few AP shells hitting a ship would not take out hundreds of personnel at a time. Why are you even bothering to go on this mini-rampage trying to shit on someone when you don't even know what they mean? It makes you look like an illiterate shunt.

She's actually a heavy cruiser, since the guns are bigger than 155mm.

igeticsu, thus making her a heavy cruiser, its as easy as that.

Beautiful ship! Those double turrets look deadly too. Whomever you guys have working on the ships are truly some of your top designers.

Just give us some twin/triple barelled turrets already.