The USS Barker is one of the American Clemson-class destroyers that will be available to all participants of the naval closed beta testing. Her small size, high speed and deadly armaments allow her to effectively hunt both smaller vessels as well as support larger ships in battle.

Briefly: A ship of the American Clemson-class destroyers, featuring great mobility, fast-firing cannons and hard-hitting torpedoes in a compact package.

Laid down in April 1919, the USS Barker was part of the second production batch of the Clemson-class destroyers. She was completed by September of the same year and entered service with the U.S. Navy in December. In the interwar period, USS Barker visited several Turkish and Middle Eastern ports, before joining the Asiatic Fleet in the early 1920s. She cruised the Asiatic waters as well as performing patrols off the coast of Nicaragua before carrying out several visits to European ports in the late ‘20s. USS Barker was kept in the Asian theatre as part of the Asiatic Fleet until 1941, when the United States officially entered WW2 following the Pearl Harbour raid.

At the time of the raid on Pearl Harbour, USS Barker had been stationed on Borneo. Following the outbreak of hostilities between the U.S. and Japan, Barker undertook several patrol and escort missions around Borneo and the Dutch East Indies. Patrol and escort duties comprised most of USS Barker’s routine whilst stationed in the Pacific. In 1943 however, USS Barker was assigned to the Atlantic theatre as part of a hunter killer group. Despite this, the USS Barker rarely engaged in direct combat. Instead, she’s defined by her efforts of saving the lives of dozens of German sailors, who were lucky enough to survive the sinking of their vessel. From 1944 until the end of the war, Barker was mostly relegated to convoy escort duties in the Caribbean and Newfoundland. After the end of WW2, USS Barker was decommissioned and sold for scrap in November 1945, marking the end of her 26-year service period. 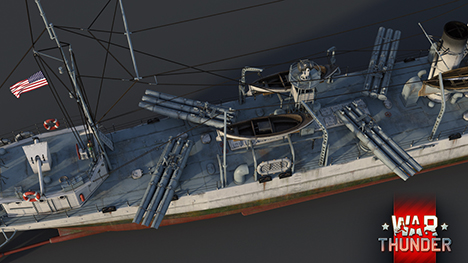 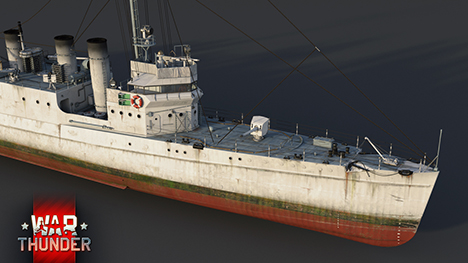 In War Thunder, USS Barker will be a researchable destroyer of the third rank of the American naval tree, available to all participants of the closed beta testing of naval forces. Unlike the Fletcher-class that shares the same rank, future captains of the Barker will need to have more modest expectations from Clemson-class destroyers, as they were designed during WW1. However, their small size, high speed and excellent maneuverability make them exceptionally great MTB hunters and support ships. 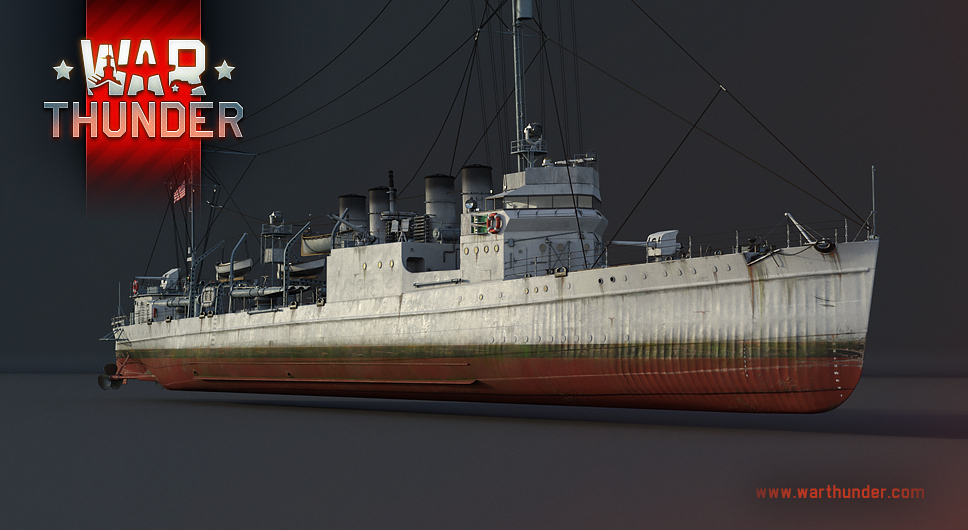 The USS Barker is equipped with a primary armament consisting of four single batteries of 4’’ (102 mm) cannons. Though these are spread out evenly along the ship’s deck allowing for good firing angles, it’s impossible to get all four guns to bare on a target due to the arrangement of the two center-mounted cannons next to the funnels. This drawback is somewhat compensated by the cannons’ excellent rate of fire, however. In addition to the primary armament, the Barker is also equipped with two single 20mm anti-air cannons, capable of providing the ship with at least some form of protection against aerial threats, as well as a single 3’’ (76.2mm) cannon on the stern of the ship, acting as AA gun.

Compensating for the Barker’s complete lack of armor protection is a maximum top speed of 30 kts (56 kph) as well as excellent maneuverability. Aspiring captains of the Barker are highly advised to use the ship’s mobility to outflank unsuspecting larger opponents, such as light cruisers, to deploy a spread of 533mm Mk.XV torpedoes from either one of the four launchers present on the ship. The good mobility should also be taken advantage of when getting out of unfavorable battle situations as the Barker with its 150 sailors cannot sustain a prolonged battering from enemy fire.

Although the USS Barker doesn’t seem like an attractive first choice for you to take out in battle, it may surprise the occasional captain with its performance, so be sure to give it a try in the closed beta testing on the next best occasion. Who knows, maybe the USS Barker is just the ship for you after all?

Commenting is no longer available for this news
Rules
_LaiLai_
10

Okay cool, another ship, but where is the summer sale??? It's June 26th already.

There was already a summer sale started on Steam for War Thunder, if that's what you are asking about.

Millzey, I believe what _LaiLai_ is referring to is the Gaijin store Summer sale. Which last year started on June 22nd.

war thunder when will the scharnhorst & Gneisenau be added

gunbus, they are BB's and were currently at Light Cruisers the next class will be heavy cruiser example; Graf Spee , Prinz Eugen.

yeas it must be in game!

They gotta get this in and work their way up! Currently I'm having a lot of fun with the naval CBT so it should get better from here.

Sure, let's make anything smaller than a destroyer entirely irrelevant, destoyers should be the largest ships with more Corvettes and frigates being added, cursiers are too big, their armor means boats physically can not damage them enough to be competitive

Baseplate36, In my view, it completes the circle. Destroyers were originally designed to kill torpedo boats and other small craft. Giving us bigger targets that aren't specialized to destroy small craft will give the MTBs more playability. Torpedoes can cripple a ship entirely. Unless it's something like the King George V with 373mm belt armor and fuel bunkers in the bulkheads, we still should be able to take out heavier ships.

Would be sweet to have in the future.

This is a nice ship for sure, but might I ask what's the point? It's basically the same as USS Litchfield. Why not give us USS Hovey or USS Long, which were equipped with dual 102mm gun mounts, so 8 guns in total. That would be more interesting than having two ship that are basically the same.

There are some Clemson class with twin 102mm gun mount. Any hope for them?