Tone is the lead ship of a class of two heavy cruisers, also being among the last cruiser vessels to be completed for the IJN. With its distinctive gun  arrangement and heavy anti-aircraft firepower, Tone will assume the role of the new top Japanese heavy cruiser following its introduction to the game with the War Thunder: Starfighters Major Update!

Briefly: One of the last Japanese heavy cruisers to see completion, featuring much improved anti-air firepower and a unique for the game all-bow mounted gun arrangement.

Initially, Tone and her sistership Chikuma were laid down as Mogami-class cruisers. However, as design flaws with early Mogami-class vessels became apparent and Japan abandoning the London Naval Agreement, the decision was made to change the design of these two ships and create a separate class from them. As a result, Tone-class cruisers resembled the general design of the Mogami-class, but had all their gun turrets placed on the forecastle while also featuring a heavier emphasis on seaplane operations, having their entire aft deck space dedicated to it.

Tone was completed in 1938 and joined the ranks of the IJN in November that year. Upon completion, Tone and her sistership formed the 8th Cruiser Division, operating together as part of this unit for the majority of their service careers during the upcoming conflict. Their first combat mission was none other than participating in the attack on Pearl Harbor in December 1941, with their floatplanes acting as scouts for the upcoming attack.

Subsequently, Tone and her sistership took part in almost all significant battles of the Pacific Theatre, being involved in the invasion of Wake Island, the Battle of Midway, the Battle of Guadalcanal, the Battle of the Philippine Sea and many others. Towards the end of the war, Tone underwent several refits, substantially bolstering her AA firepower and radar equipment with each drydock visit.

While Chikuma was already lost in October 1944 as part of the Battle of Leyte Gulf, Tone continued serving on until the very end of the war, being sunk at Kure harbor in July 1945 following a major allied air raid on the Japanese naval base. The ship’s wreck was subsequently dismantled in the immediate postwar years and sold for scrap. 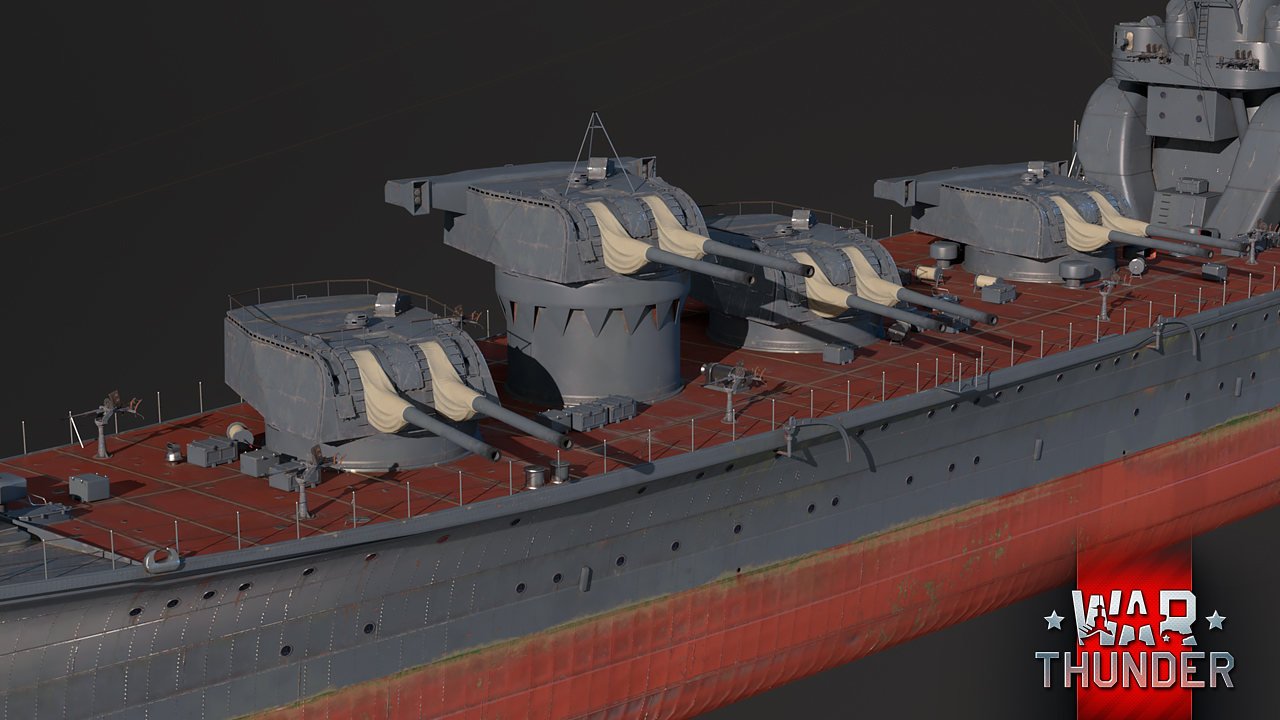 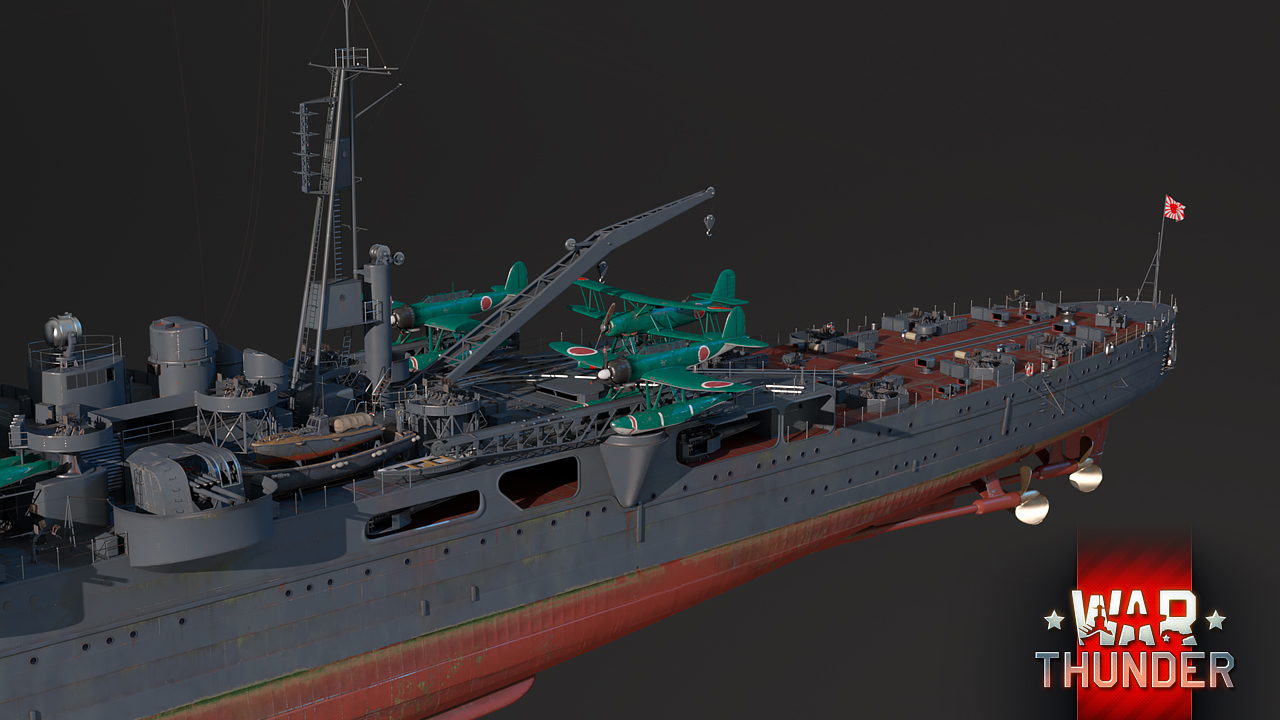 Tone will become the new top Japanese heavy cruiser upon its arrival to War Thunder naval forces with the release of the upcoming major update "Starfighters". Unlike the Mogami-class that precedes it, Tone trades some of its primary gun firepower for much improved anti-air protection and features a thus far unique gun arrangement in War Thunder naval forces, allowing captains to make use of different battle tactics to achieve victory on the high seas!

Unlike most vessels in War Thunder, Tone features a rather unorthodox arrangement of its four dual 8’’ (203mm) turrets. Whereas the familiar Mogami-class vessels have three turrets placed on the ship’s forecastle and two abaft, Tone not only has one turret less in its arsenal in general, but also has all four of its turrets placed on the ship’s forecastle.

While aspiring Tone captains find new battle tactics to beat their opponents, one thing they won’t need to worry about too much is the threat posed by enemy aircraft. Unlike with most other Japanese cruisers, Tone is being introduced to War Thunder in its 1945 modification, featuring a vastly upgraded anti-air suit. As a result, the airspace above Tone is being closely watched not just by four dual 5’’ (127mm) multipurpose cannons, but also by 18 single, four dual and 12 triple 25mm cannons, amounting to a total of 62 25mm barrels scattered all over the ship’s deck space! Following Japanese cruiser design philosophy, Tone is also additionally equipped with two triple 610mm torpedo launchers on either side of the ship’s hull, capable of firing two salvos of deadly Type 93 torpedoes each.

Further differences found on Tone when compared to the preceding Mogami can be observed in its armor layout for example. Although the belt armor remains the same at 100mm, the magazine plating was slightly increased to 145mm thanks to the concentration of all guns on the front portion of the ship. However, while maintaining a comparable displacement and a propulsion system of identical power output, Tone offers its captains a similar degree of mobility as Mogami does, being able to achieve a top speed of 35.5 knots (65.7 km/h).

Captains will soon have the chance to meet heavy cruiser Tone in War Thunder naval battles, following its introduction to the game as part of the upcoming major update "Starfighters". In the meantime, be sure to keep a wary eye on the horizon for more news regarding the next major update coming to the game in the near future. Until then, calm seas and happy hunting captains!

Commenting is no longer available for this news
Rules
N1ghtmare
0

The most unique cruiser in the game ?

The Tone of this devblog is a tad big forward...

Hey she's actually getting added, nice. She's a great looking boat. I dunno if I've missed this being answered before but are the seaplanes that're attached to some of the ships ever going to be utilised in naval RB or is it purely decoration?