News
back to news
Development
31 October 2019

Belfast: The Guardian of the Thames

The Belfast is a state-of-the-art light cruiser used by the Royal Navy. This is the ship that is permanently moored near London’s Tower Bridge.

The light cruiser ‘Belfast’ was the next big step in shipbuilding design, following the Manchester cruisers, and, according to experts, this vessel (tied together with her sister ship, the cruiser Edinburgh) was the most advanced light cruiser in the Royal Navy of Great Britain during WWII. Belfast was laid down in 1938, and a year later, the cruiser came into service. The ship initially played a part in the British naval blockade against the German forces during WWII, however, in November 1939, the Belfast struck a mine and spent three years undergoing repairs, during which she also received a number of upgrades.

The modernised light cruiser was then deployed to escort Arctic convoys heading to the USSR, where she fought the German fleet for the first time. In June 1944, the Belfast provided cover for the US landing troops on the well-known D-Day, which took place in Normandy. At the end of World War II, Belfast was sent to the Pacific Ocean, where she joined the British Pacific Fleet. The next combat action the light cruiser saw was the Korean War, in which she participated from 1950 to 1952.

After taking part in a number of military operations and missions in Southeast Asia and the Pacific Ocean, the old war dog finally retired from the battlefield in 1963. The era of those ships was over and it seemed that the Belfast was essentially doomed to become scrap metal. However, fortune favoured the cruiser, as a group of enthusiastic war historians, among whom was a former Belfast commander, persuaded the British government to use the ship as a museum of war history. Since 1978, light cruiser Belfast has served as a branch of the Imperial War Museum and is permanently moored on the Thames in London. 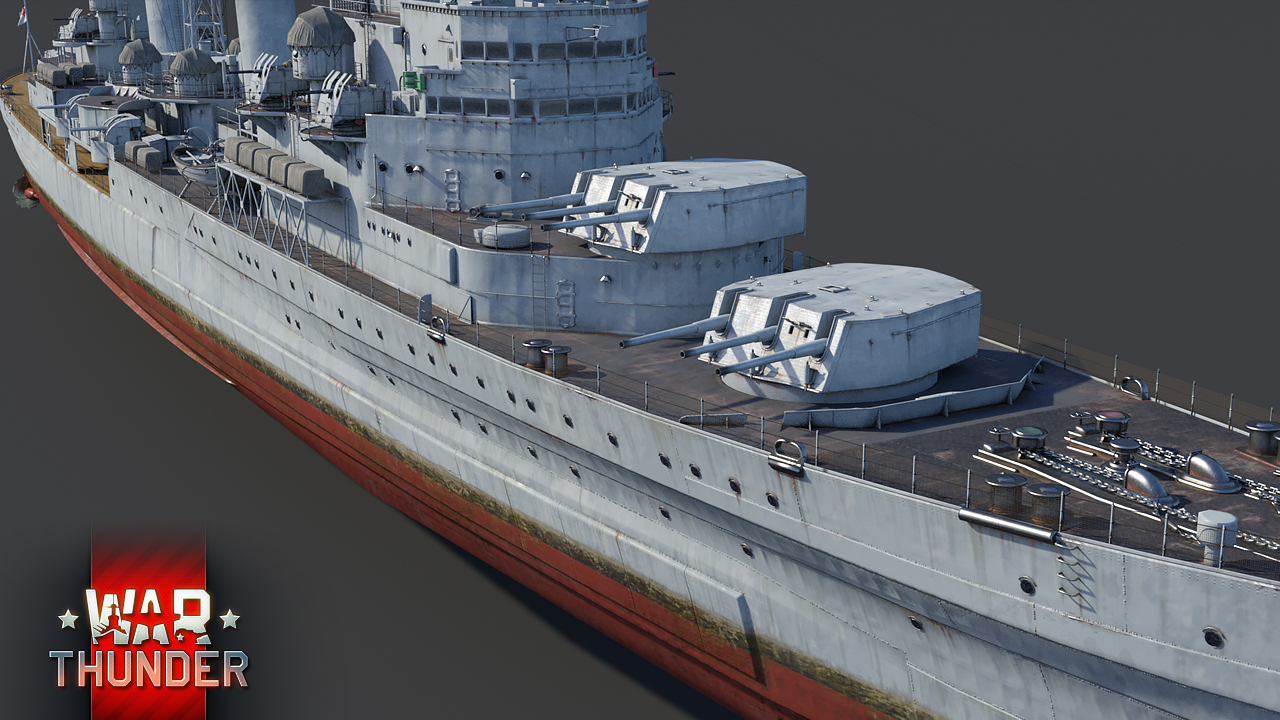 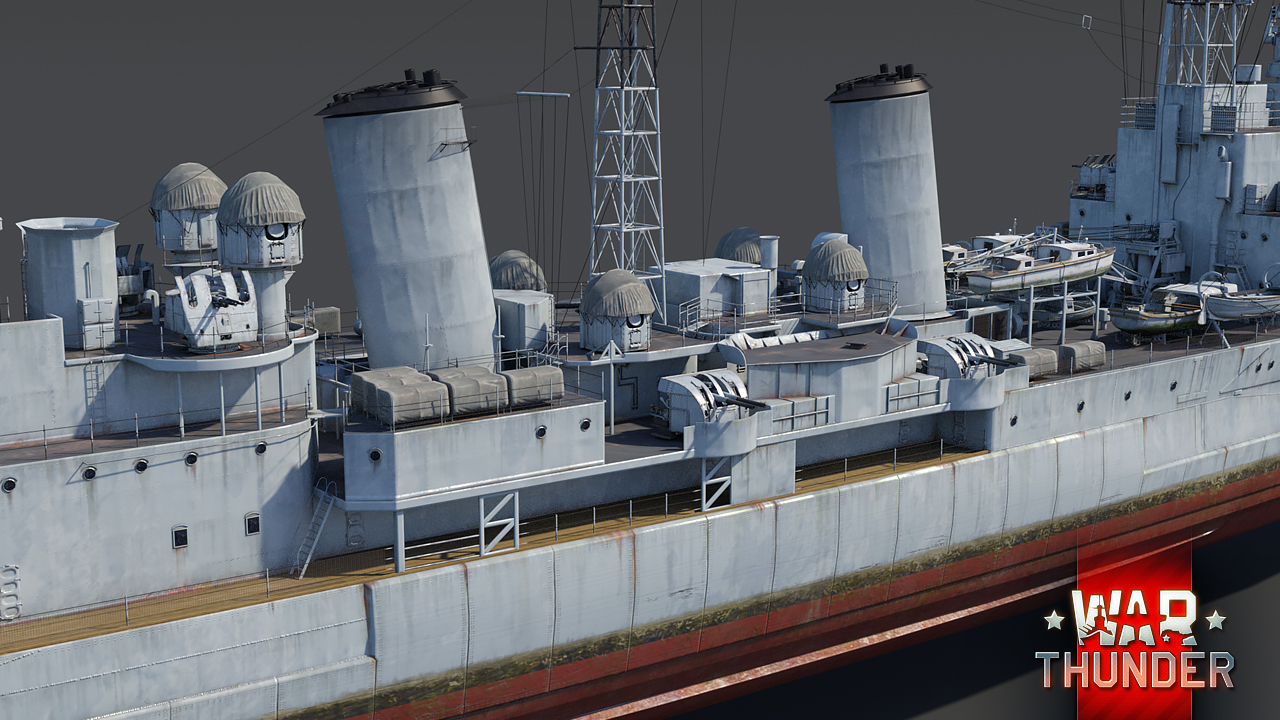 In our game, the Belfast became a premium rank IV ship in the Royal Navy tech tree. Technically, she is a town-class cruiser, just like the Southampton, a ship players will already be familiar with. However, the Belfast is slightly different from her – and for the better. For our game, we chose the iteration of the ship after her last significant modernisation during service. In 1959, the primary armament of the cruiser comprised of four triple 152mm cannons (12 in total) and four dual purpose 102mm cannons (8 in total).

The Belfast’s primary distinctive feature lies in her extremely powerful anti-air armament, practically all of which are 20 mm in calibre, except for the 40mm cannons that replaced some of the 102mm dual purpose cannons. So, to sum it all up, the deck of this light cruiser carries twelve anti-air barrels: six twinned 40mm cannons all locked and loaded for repelling air strikes. Given all of that, the Belfast is also fairly well protected – her main armour belt is 114 mm thick, while her deck armour thickness amounts to 76 mm above the magazines and 51 mm over the engine rooms. The main armament turrets also have 102 mm of armour.

In a nutshell, the Belfast truly is a phenomenal light cruiser representative in our game. This ship cannot be recommended enough to players – and not just for the purpose of researching new heavy rank V ships, which made their first appearance in update 1.93, but also simply for the fun factor alone, as the Belfast’s powerful armament, excellent defences against attacks from the air, and great armour make her a real toughie that far from every opponent can handle.

The Belfast is a legendary ship and contemporary London tourist attraction that has come to War Thunder in update 1.93. So keep calm and rule the waves!

Commenting is no longer available for this news
Rules
LeoMD
5

I think shes still in America at the moment. If you leave now, you might catch her.

I think they already said no to player controlled aircraft carriers

darkpheonix4565, i think he means for the AI bc they gonna update that and that one then for the brits

Looks like a good ship for naval players also why did japan get nothing in this patch?

Happens to every nation every once in a while except USSR I think.

On a related note...if the Hawkins is Rank V, why aren't the Krazny Kavkaz, Kirov, Kako, Furutaka, Mogami, or Hipper Rank V?

Why did it have to be the 1959 modernisation?

Because that's the look everyone is familiar with. Same reason World of Warships has that version in their game. That's how she looks today.

This is generally her most widely know configuration.

Nope, they released this one already in 1.93. Drunk for the devblogs I assume ?

LuciusTAV, you can't just get enough of them, you know

GoonyGooGoo, This is hardly the first time that a devblog comes out after the patch has already dropped.

Beautiful ship! I knew we would be getting premium cruisers as soon as they introduced rank V ships. There's nothing wrong with that. So long as they don't cost as much as a tier VI premium. The trend for naval forces premiums seems to be that they cost much more than their same tier counterparts in ground and air forces, without yielding increased rewards.

Seeing as Belfast is a prem, can we expect Edinburgh in the tree? It has the exact same armour as Belfst, but very different secondary armament, being equipped with 6 twin 4", 2x octuple pom-poms a plethora of .50cals and torpdeo tubes. It eould make a good end of the RN main cruiser line. Speaking of which, what about all the Town class derivatives (Crown Colony, Swiftsure) and the various Dido subclasses?

You already have the Southampton. Same class. Yes I know the Belfast is longer but functionally and design wise, same boat.

Conte_Baracca, Perhaps you should do more research they are very much NOT the same boat and they perform VERY differently. Even ship-to-ship of the same subclass there can be drastic differences

The ships look pretty cool in the hanger for Halloween by the way!

LOVE TO SEE THE BELFAST!!!! but where are her torpedos? or did you not add it for balance purpose?

Why can't you read? It's her 1959 modification, how she is today. She doesn't have any torpedoes