Dear friends! We’ve got some great news! A new playable nation is coming to the game in the War Thunder 1.93 “Shark Attack” update – Sweden! We’re kicking off our rollout of Swedish military vehicles with aircraft, and in War Thunder update 1.93 you’ll get the chance to be the first owners of aircraft from this new in-game nation.

We’re offering early access to Sweden’s tech tree in two preorder packs, where you’ll get premium aircraft, unique decals, titles, and exclusive access to the testing of Swedish aircraft in the game. Today we’re going to tell you about an aircraft from one of these packs – the Swedish SAAB J29D jet fighter.

The first two aircraft from the Swedish air forces will be available in upcoming update 1.93 “Shark attack”. The closed beta-testing of the Swedish air tech-tree will begin later, in the following War Thunder update.

While Sweden traditionally imported a great deal of military tech, including in its aircraft, Swedish aeronautical engineers nevertheless developed and built combat aircraft of their own design. Like the leading world powers, in the immediate post-war years Sweden focused its research capabilities on jet-powered aircraft. Even before the outbreak of World War II, research into jet engines was already taking place in Sweden, and the war gave industry experts the opportunity to acquire priceless experience studying the progress made by other countries, Germany in particular.

At the beginning of 1945, a project to build the first jet-powered fighter was born deep in SAAB headquarters. Immediately after the end of the war, Swedes bought the license to produce turbojet engines from the British company de Havilland, and they began converting their J-21 piston-engine fighters to jet-engine fighters. With the arrival of the new Ghost engine from the Brits and promising research into swept wings, SAAB began developing a fundamentally new kind of fighter, initially planned to be fitted with a jet engine. Within a short time, the Swedish Air Force received the J29 Tunnan. Named after the Swedish word for “barrel”, based on its shape.

The Tunnan was an awkward-looking machine, but one with superb flight characteristics for the time, enabled by its swept wings. Judge for yourselves: successful testing took place in 1948, followed by mass production in 1951, and by 1954 the J29B modification set the world speed record in a closed circuit. That’s impressive! 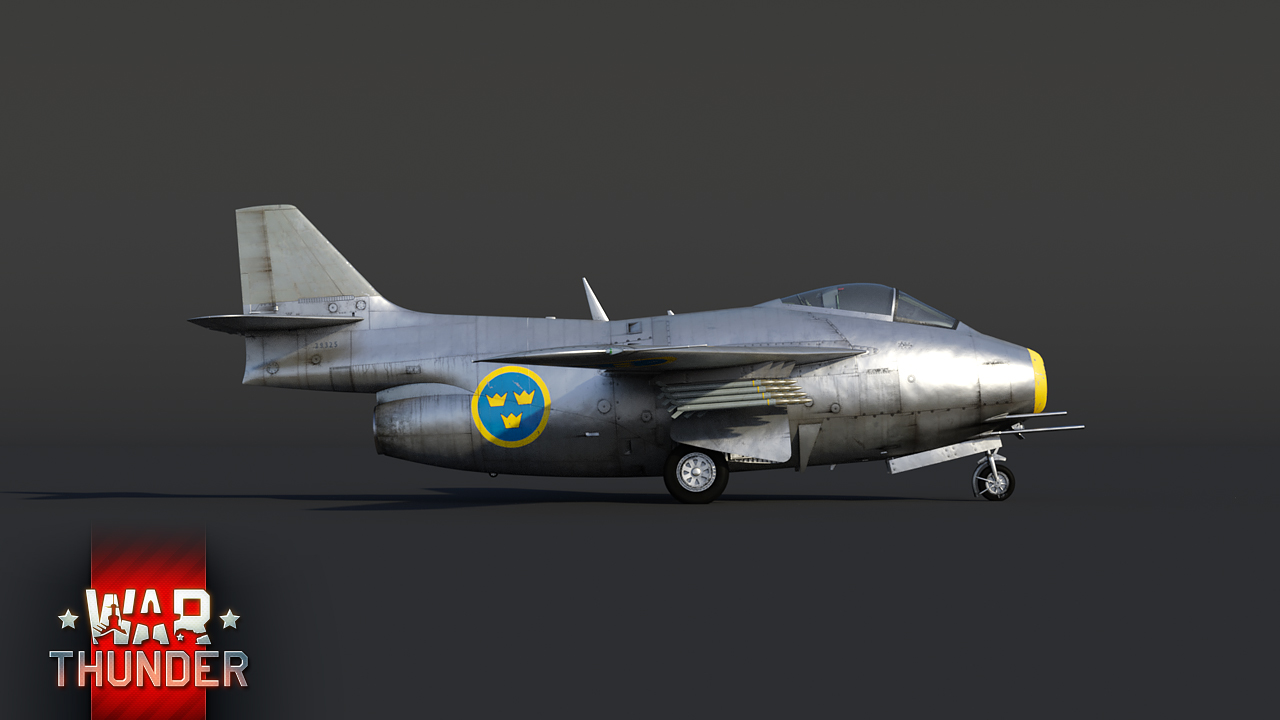 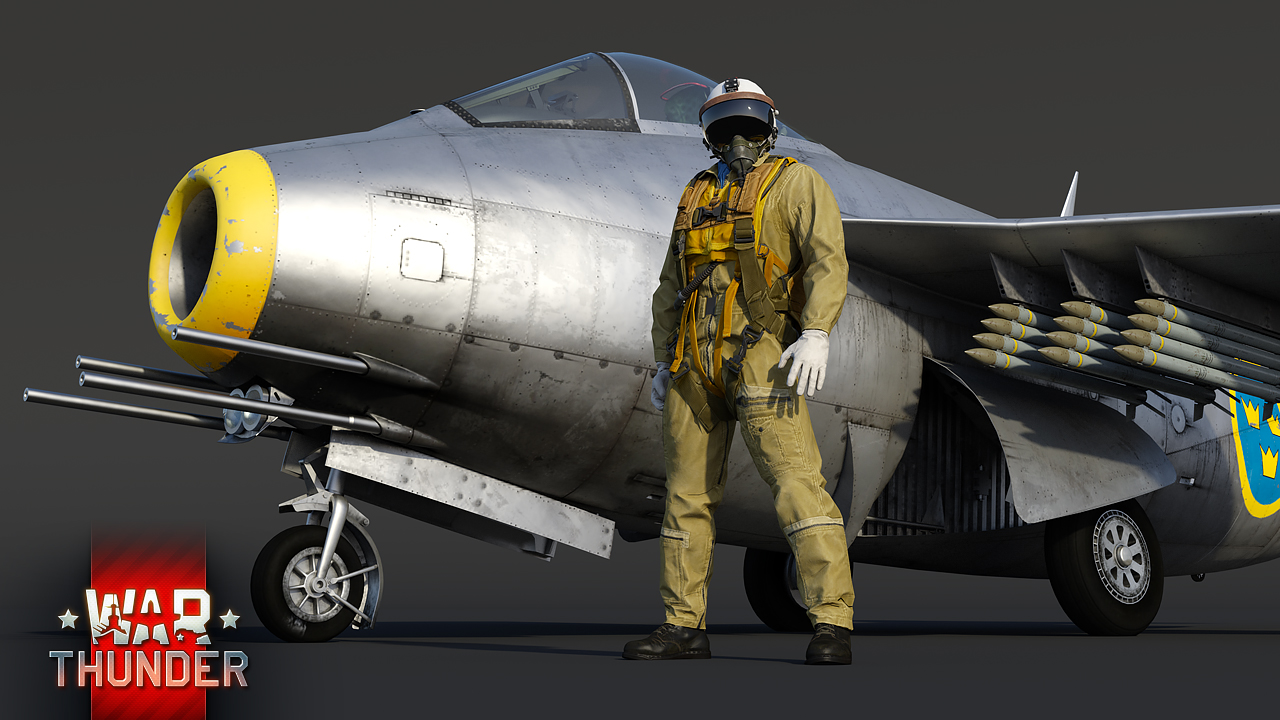 We’re offering our players a modified prototype of the Swedish “barrel” – the J29D. Compared to previous variants, it boasts a new powerful engine and enhanced frontal armament. In terms of powertrain, the licensed Ghost engine has been replaced with the SFA RM2B engine with afterburner, possessing almost 25% greater thrust.

This jet fighter is able to achieve slightly over 1000 kph at sea level, with a 55 metres per second climb rate with afterburn enabled. Instead of 20mm cannons, the aircraft is fitted with British 30mm ADEN cannons. From version B, the aircraft got wing-mounted racks for 75, 145, 150, and 180mm rockets for ground and naval targets

The final product is a well-built jet fighter with excellent flight characteristics, powerful frontal armament for air battles, and assault suspensions for taking out ground forces. The J29D’s direct peers in the game are the American Sabre and the Soviet MiG-15bis. The J29D displays bold individuality in every aspect: its unusual appearance, its excellent combination of speed and manoeuvrability, as well as its versatility, which sets it apart from most other aircraft.

The SAAB J29D is a great first choice for getting to know the aircraft of Sweden!

Commenting is no longer available for this news
Rules
Validuz
56

Man, talk about being plump. Cute, sure, but somebody ought to put the thing on a diet. I mean, look, even its barrels are sticking out way past any point that's appropriate for decent company.

There is no such thing as "too chonk".

You think that's chonk? Look up the XF-85 Goblin.

I love you Gaijin! This is whst ive been waiting for 7 years!

I think Gaijin could tell.

PL_Andrev, There is nothing copy-pasted about this nor most of SwAF dude...

I can't find any reference of this prototype being armed with 30mm's. Most sources I've found state it kept the original 20mm armament...

My guess is that they'll either add a armament option with the 4x20mm or just add one in the regular tree with the 20mm.. just i guess.

Suomi_Gondola, That would not be a bad idea really

I don't think there ever were.. Unless they give sikrit document. Which would be BS since Swedish archives are open to the public unless it's still top secret which this one would not be since it's not the 1950's anymore..

Kharon1, The J 29D we get here is the J 29D Akan m/55 which this version is called, J 29D only got the Engine upgraded, meanwhile later when Sweden thought those 20mms were not enough for bomber interception, they wanted to add 30mm Akans m/55 (adens) instead of the 4x20mm m/47c. This version got called J 29D akan m/55 that got canceled for the Saab 32 Lansen.

We're working on it.

they said on stream that france is getting a supersonic

This is War Thunder. Players ARE interested by a weird chubby plane able to send ~20kg of lead down range per second. :D

Nomadic_Warrior, Well im a fella named nobody too. And im fairly certain there are many others, especially because this tree wont be copy paste galore