We’ve got great news for fans of War Thunder’s naval battles: the first rank V ships will be added in the next update!

The new top-tier ships in naval battles will be heavy cruisers, as well as even larger vessels to be added in the future.

Ships will be added to rank V gradually, and in update 1.93, we’re presenting the first two top-tier combat vessels. Today we’d like to tell you about the USS Pensacola, a heavy cruiser and a true titan of War Thunder’s naval battles! 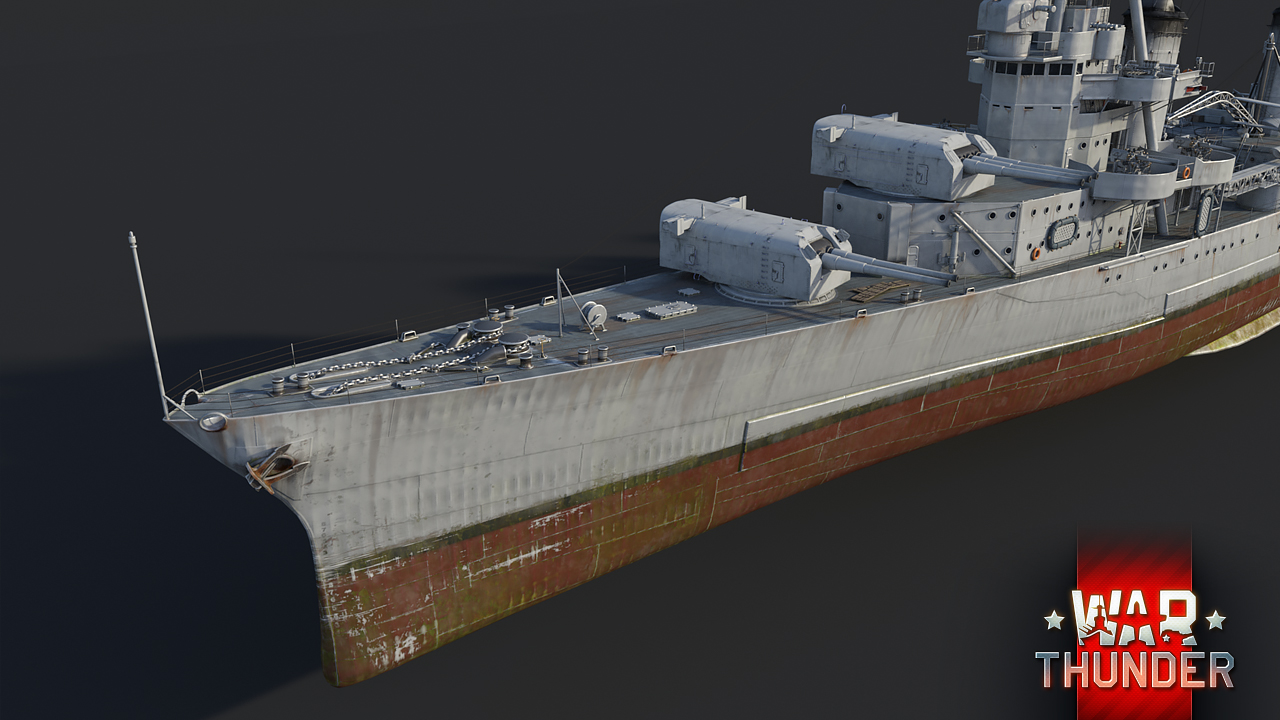 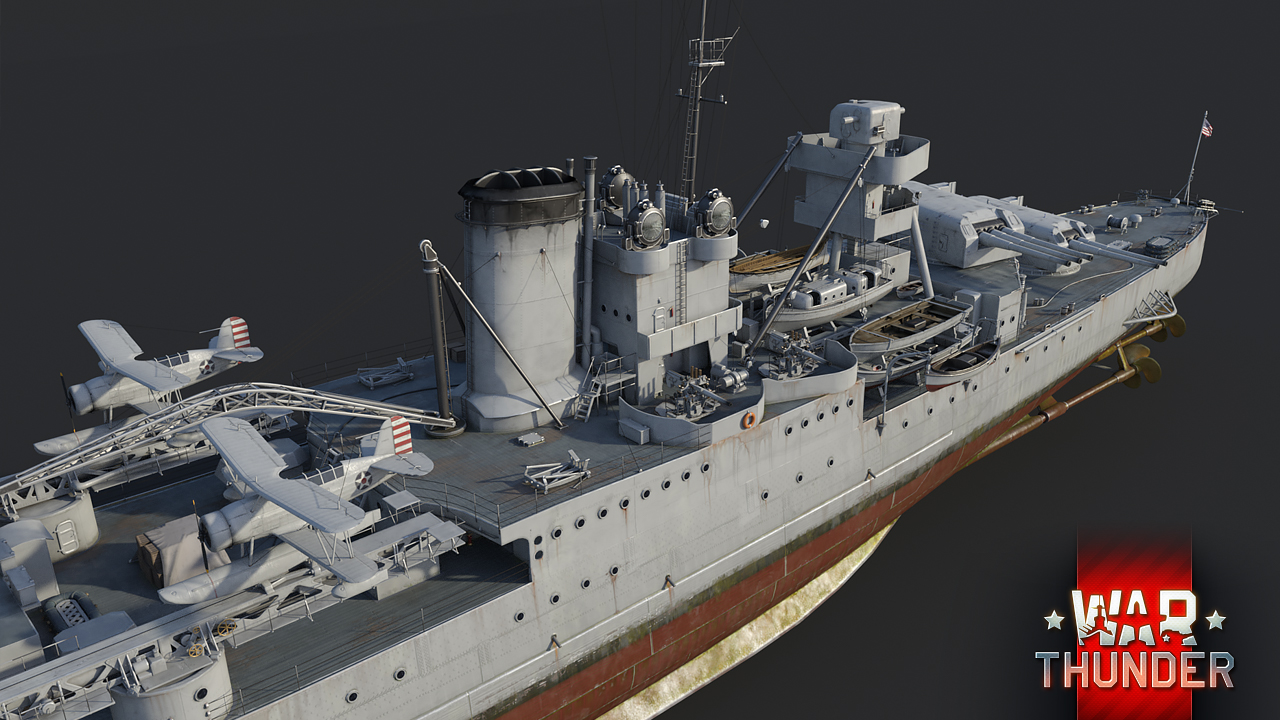 The Pensacola is the first US ship of a series of so-called “Washington Сruisers” that were designed based on the requirements and restrictions of the Washington Naval Conference. The ship began its design journey in 1919, when the United States’ potential rivals were Great Britain and Japan (amongst others). The ship had to be able to stand up to the British Hawkins class heavy cruisers, and a potential war with Japan in the Pacific meant that the vessel had to be able to travel significant distances. A draft of the new heavy cruiser was ready by 1923, but it wasn’t accepted until 1925. The main armament of the 10,000 ton cruiser was ten 8 inch (203mm) guns, her predicted speed was slightly over 31 knots (about 60 km/h), and her armour was expected to withstand hits to her magazines from 130mm shells at medium range. The fast, heavily-armoured Washington Cruiser would thus not able to withstand fire from another heavy cruiser with 203mm guns, but she would be able to effectively fight light cruisers with 152mm guns at ranges where the smaller ships’ weapons were not particularly effective. The first two ships of this type, the Pensacola and the Salt Lake City, were ordered in 1925.

Before World War II, the Pensacola served off the US East Coast before being transferred to the Pacific Ocean as part of a division in 1935. The Pensacola left for Manila not long before the tragedy of Pearl Harbor, and the news about the outbreak of the war reached the crew while they were enroute to their destination. The cruiser saw her first battle in February of 1942, where she fought off a raid by Japanese aircraft near the Solomon Islands group. The Pensacola soon took part in the epic Battle of Midway, then provided cover for paratroopers at Guadalcanal. Combat operations against the Japanese navy and air force continued throughout the entire summer and autumn of 1942. During a skirmish with the Japanese on November 30th, the Pensacola took a torpedo hit, which led to an explosion and a fire. 125 of the crew were killed. Repairs took almost a year, but the Pensacola returned to service immediately thereafter. The heavy cruiser fought in many famous American naval operations in the Pacific, including the attacks on Iwo Jima and Okinawa. Toward the end of the summer of 1945, the Pensacola returned to the Florida for repairs. The cruiser was in the Port of Adak in Alaska when the war ended. After the war, the effect of nuclear explosions was tested on the Pensacola during tests at Bikini Atoll.  The decommissioned heavy cruiser was destroyed during artillery drills near Washington State.

In War Thunder, the Pensacola will be one of the first rank V ships and occupy the new top-tier position in the American naval research line. In the game, the Pensacola straddles the edge between ranks IV and V in terms of her stats, but she also opens a path to researching larger rank V ships.  The Pensacola is essentially a light cruiser “on steroids”, an intermediate link between classes that combines the armour and movement stats of a light cruiser with the powerful weaponry of a heavy cruiser. The ship’s main armament consist of ten 203mm guns in four turrets located fore and aft. Her universal artillery includes eight 127mm guns in open mounts on either side. Her close-range anti-air battery includes two quadruple 28mm guns (“Chicago pianos”) and four .50 calibre machine guns.

The Pensacola’s main armour belt is comprised of 76mm-thick steel plating that reaches a thickness of 82.6 mm in the region of her fore magazines. The ship’s main turrets are also armoured: 63.5 mm at the front and 38 mm on top. In other words, as you can see, the Pensacola’s armour is inherited from the ships of the preceding class. Thanks to the reduced weight of her armour, her speed is still decent – the heavy cruiser can reach a maximum speed of 32.5 knots, which is standard for this class.

All in all, the ship’s pros and cons are pretty obvious: moderate armour, a powerful anti-air battery, excellent speed, and a superb main armament. You’ll want to keep these characteristics in mind when captaining her. Some destroyers and almost all light cruisers can penetrate the Pensacola one way or another. Use your speed to close in on the enemy and deal as much damage as possible with those main guns.

Attacks from the air can cause problems, since the Pensacola’s quick-firing guns just aren’t powerful enough, and her 127mm guns might not be able to aim at aircraft quickly enough under AI control, so it makes sense to take direct control of the AA guns and fire at aircraft manually. By the way, the 127mm cannons have shells with radio-controlled warheads, which can really help against aircraft. All in all, the Pensacola is a great ship for active combat that deals catastrophic damage with each hit.  Naval commanders will be able to take the wheel of the Pensacola in update 1.93 “Shark Attack”. We can’t wait for you to see these massive ships!

Commenting is no longer available for this news
Rules
Andrew980310
24

Rank V ships are nice. But I am more interested in the question: Where is my Type10

Your question is nice. But i am more interested in answering: The leopard 1 development process is indeed fascinating, it's rare to find another dedicated fan! Good to know i'm not alone on this, the telephone box revisions always get a giggle out of me. Funny to see the 3 versions are a key element to identify some of the Leo versions. Same with the tool placement. They all looks similar on the surface, but it's the minute details you know? Anyway, happy to share a passion, have a good game!

Ouiche, Didn't you have a limited time event where we could test a VB10 with sea mines, what happened to that? I would have loved to hear something along the lines of "hey, that test back then was good, but we still work out which vehicles should have those" or "you know, the test shows this is not working out, so we scrapped it" I mean I love the hint of Monitors, BCs and BBs coming, but would also like to know about that.

the same to ZTZ96

Nice boat! Fun Fact: Yesterday Japan's new emperor ascended to the Chrysanthemum Throne, it would have been the perfect time to reveal some Japanese units, but you blew it! No Banzai! for you Gaijin.

I demand new Japanese steel to be added! a new emperor and new top level armnaments at the same time would be most honorable.

Bruh, was that a School Days reference?

Skelezig, head on a yacht

This is not [Insert vehicle of your choice] !

Can we talk about how good Gaijin's modellers are? Be them outsourced or in-house, they're always top-notch. BUT, but....Lightning or Scimitar? :(

The lightning was confirmed for this patch by dev comments in the lead up to the last one, scimitar doesnt really make sense as gaijin still has several other mach 2s to make for everyone to be competitive (e.g. mirage 3, f-104g etc)

Aethersprite, Scimitar would serve to flesh out the lower end of Tier 6, as it's just barely under the Mach 1 mark and filled to the brim with loadouts.

can you take your Cheese and Whine too a Tank post for fk sake you whiney lil bitch! Pensacola dosnt have Tracks and it swims what kind of crayon are you eating to be here anyway? now too anticipate the Fappening 2.0 when they name the Graf Spee for Rank V!!!

Km/h? I thought this was the navy!

Ah, landlubbers who created the video will be punished!

Stona_WT, any idea if there will be the possibility to set measurement units seperetly for Air, Ground and Naval instedt of the current one-for-all?

you have a point

I hope we can finally see a more dynamic camera for the hanger soon. I want to be able to look at these gorgeous models in a way that is not stuck at awkward angles and annoying lighting.