The Bréguet 693 is a French twin-engine ground attack aircraft which first entered service with the Armée de l'air just prior to the outbreak of WWII. Coming to War Thunder as part of the upcoming update 1.93, the Bréguet 693 will allow French pilots to take control of a new low rank, but highly potent ground attacker! 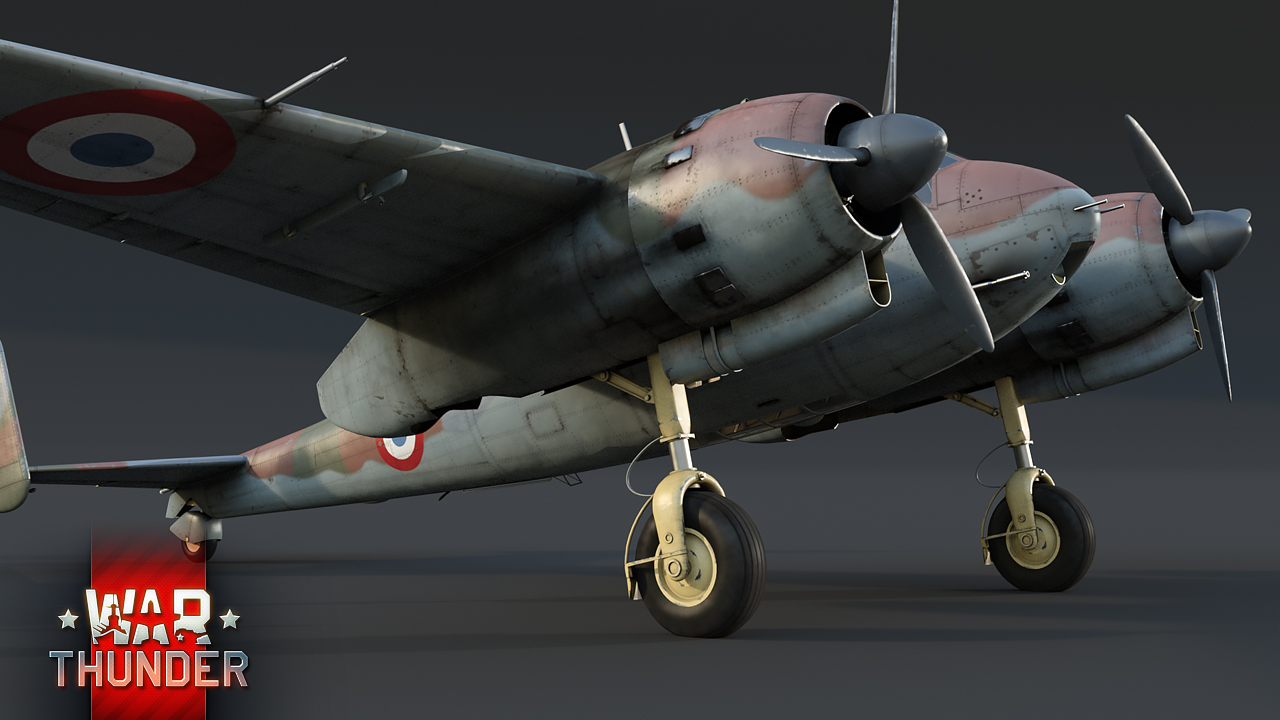 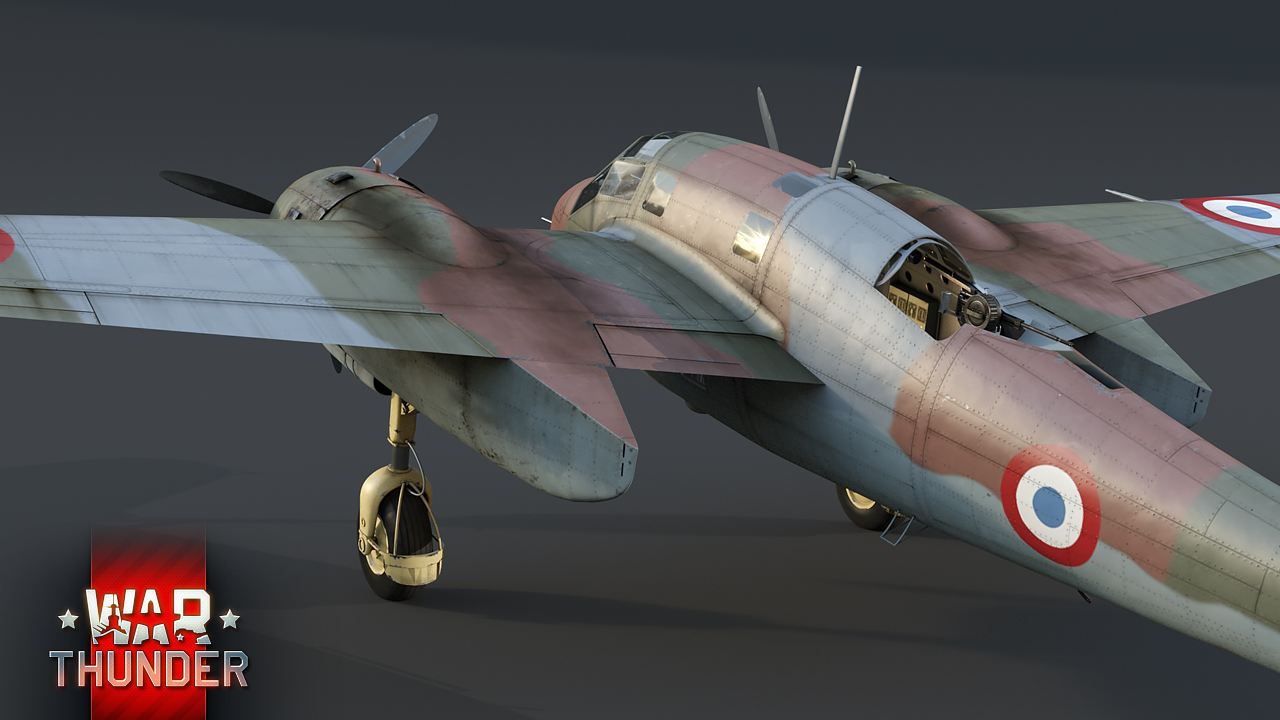 In 1934, several French aircraft manufacturers set out to design new strategic fighter aircraft. Among them, Bréguet chose not to follow the given specifications in the belief that the limitations were impossible to uphold without compromising performance. Unsurprisingly, Bréguet lost out in that competition, but continued development of their project as a private venture.

Although progress was slow, the first prototype - Bre 690.01 - was completed in 1938 and successfully undertook its maiden flight. With war looming in late 1938 and the French military desperately in need of equipment, the Bre 691 was hastily ordered into production, with an initial order of 100 aircraft being placed.

Production began shortly after the first orders came in. However, not long after production began, reliability and availability of the Hispano-Suiza engines caused disruptions. As a result, the decision was made to outfit the Bre 691s with French-made engines of similar output values. The modified version received the new designation “Bre 693”, while remaining identical in design to its predecessor.

During the Invasion of France in 1940, Bréguet 693s were constantly in action and were praised by their crews for ease of handling, sturdiness and ease of maintenance. However, inadequate French tactics and powerful German AA weaponry led to high loss rates in the weeks following the invasion.

After the signing of the armistice, the Bréguet 690 family was, for the most part, decommissioned from active service, being mainly used as trainers. In the end, around 350 aircraft of the Bréguet 690 family were produced before the signing of the armistice, more than half of which were lost in action or destroyed on the ground.

In War Thunder, the Bréguet 693A-B2 will be a new low ranking ground attacker coming to rank II of the French aviation tree and being made available to all pilots, following its introduction as part of the upcoming update 1.93. Similar to the Potez 630 series of aircraft, already familiar to many pilots, the Bréguet 693 offers players a highly maneuverable, fast and well armed twin-engine machine which, thanks to its versatility, can comfortably be used both in both ground attack and heavy fighter roles.

Powered by two Gnome-Rhône 14M radial engines, the Bréguet 693 is able to reach a maximum speed of 480 km/h at 5,000 m, while at lower altitudes, its top speed falls to 360 km/h. Although this may not sound all too impressive at first, when coupled with its comparatively decent agility, pilots are able to quickly shift targets in the heat of combat which may come as a big surprise to some fighter pilots that get caught off guard.

Speaking of getting caught off guard - should you ever find yourself in the crosshair of the Bréguet 693, rest assured, you’ll feel the sting of this twin-engine wasp, that’s for sure! Armed with a single 20mm HS.404 cannon, backed up by a pair of 7.5mm MAC machine guns, the Bréguet 693 will make quick work of most fellow low tier opponents it meets in battle. Additionally, the aircraft’s rear hemisphere is closely guarded by a single, flexible machine gun turret as well as a fixed machine gun position mounted on the ventral side of the fuselage.

Fun Fact: Due to design similarities, the Bréguet 690 series of aircraft was considered as the lightweight predecessor to the Bristol Beaufighter which came shortly after it.

Of course, what kind of ground attacker would the Bréguet 693 be without any ordnance options, right? To make sure that its targets on the ground don’t go home empty-handed, the Bréguet 693 is able to carry up to eight 50 kg bombs, amounting to a maximum payload of 400 kg. Although knocking out heavily armoured targets will be a challenge with these small calibre bombs, they’ll be more than sufficient in destroying lightly armoured vehicles and other soft ground targets!

The Bréguet 693 is coming to War Thunder as part of the upcoming update 1.93 and will soon be available to all pilots at rank II of the French aviation tree. In the meantime, make sure to stay tuned to the news to remain in the loop on what exciting new things update 1.93 has in store for you. Until then, clear skies pilots!

Commenting is no longer available for this news
Rules
Gavinny
79

No complaints, sure I don't play French all to often (or at all really :P) but hey something that isn't a MBT or a new shiny Jet, Thanks for showing support towards the WWII of the game :)

I absolutely hate War Thunder's fanbase. On devblogs about modern vehicles, everyone is like "WE WANT WW2 STUFF!!!!", and on devblogs about WW2 vehicles people are like "THIS IS NOT A JET!!!!!!!!!". Can't you guys just be happy with what they give you?

problem is now comunuty is divided people want anything for lower tiers while other half always want more modern stuff, and gaijin listens to those who make more money for them

*RatnyciosDievas, they should have just made the mess we have now into 2 different games in the first place lol

Those who complains are everywhere yet they are part of same boat. So easy just ignore them and enjoy the news even though its something you do not want/play/need.

HeartUnderBlade, In all honesty I really don't care about what Gaijin adds, as long as it works toward improving the game. Add whatever the hell you want Gaijin, just don't break my favorite game please.

It looks better in fact :)

LadyDeath_Elsa, go back to ActA

Nope, it looks like a WW2 aircraft that tons of people have been asking for non-stop :)

Smin1080p, It is true that people ask for WW2 aircraft a lot. I think this is because of glaring omissions in WW2 selection like the P-51B and razorback P-47s.

nice to know you havnt forgot about the ww2 period, can we expect something similar for tanks? :)

There's literally 4 tiers of WW2 content for the majority of countries...

Rocket_Queeen, Cool, and War Thunder was started and marketed as a WW2 game. There's still a lot missing, and a lot more broken about what is already there. But because World of Tanks fans started jumping ship and the Battlefield fans are spamming their demands for modern crap, Gaijin is drooling over the possibility to add more money makers... I mean vehicles... to the game

Great. One of the missing important ww2 french aircrafts.

Nice a new french WW2 Plane, more of this please!