The legendary “Black Shark” will join the premium roster of the USSR/Russian helicopter tech tree.

Following the experience of deploying American helicopters in Vietnam and other conflict zones for military purposes, the idea of designing a pure attack helicopter sparked great interest among Soviet engineers. In 1976, the design bureau of the Ukhtomsky Helicopter Plant named after N. I. Kamov began work on a new rotary-wing vehicle for the Soviet army. The first experimental model was assembled in the spring of 1982 and received the designation Ka-50 (B-80). Many rigorous tests and numerous upgrades later, the Ka-50 was put into service in 1995. During the final field-testing stages, the helicopter became the main star of the adventure film “Black Shark” – and the nickname stuck after the movie. 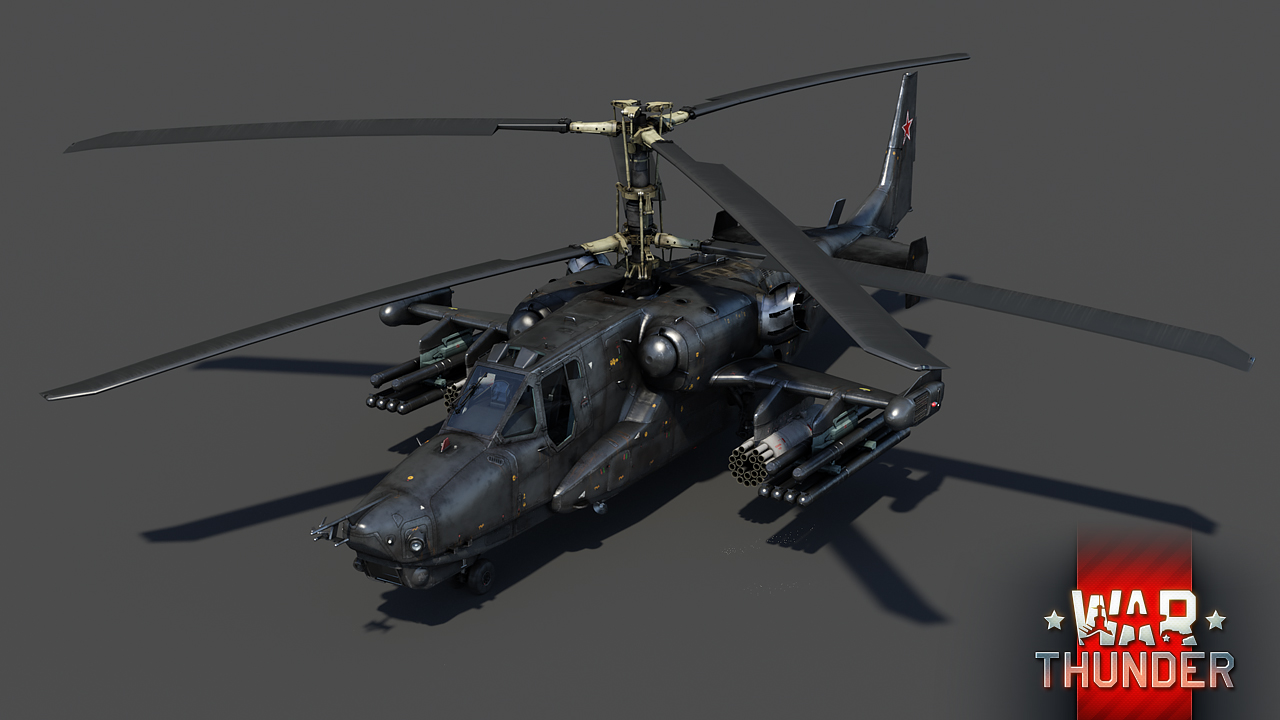 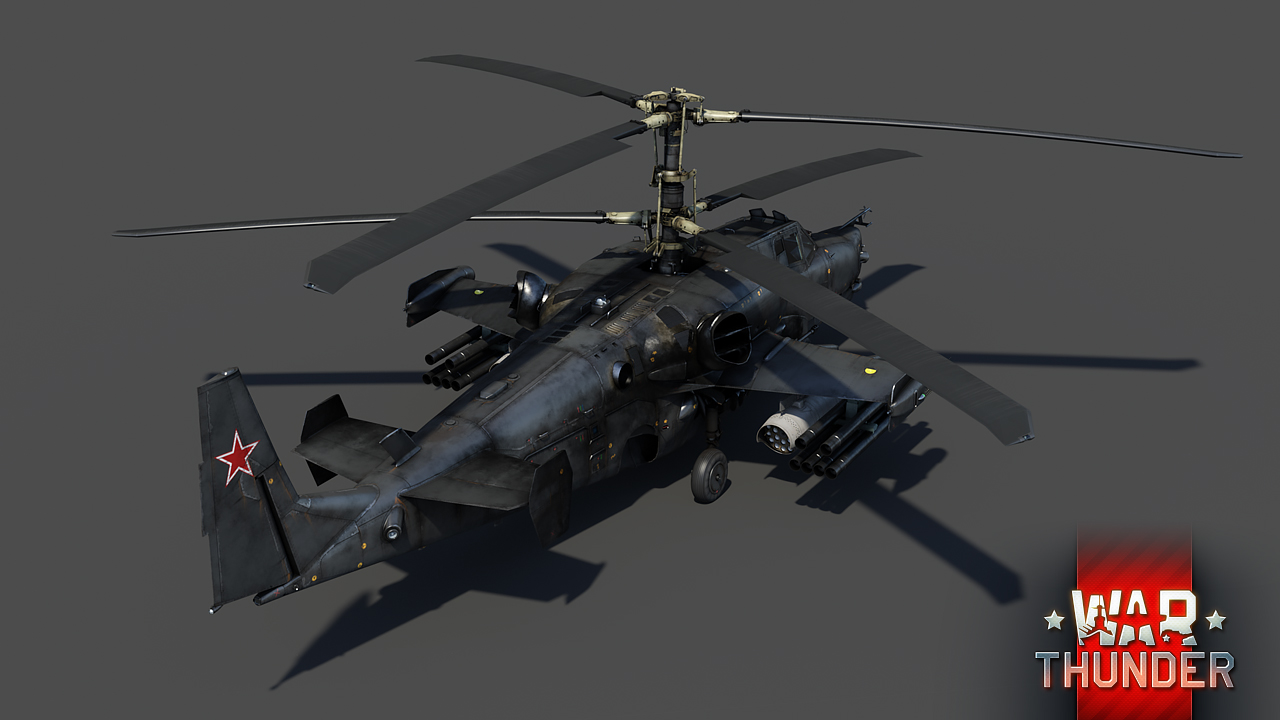 Ka-50 is the first, and as of now the only, helicopter in War Thunder that has a coaxial main rotor design. This build has several advantages over the traditional tail rotor design, including improved handling characteristics, manoeuvrability and cargo capacity. Upon reaching its maximum speed of over 300 km/h, the “Black Shark” is able to carry 2,300 kg of ordnance. The most notable features of this helicopter include the wide selection of suspended armaments and possible combinations thereof, the cockpit armour, and the 30mm cannon with its HEF and AP feeds.

In our game, the Ka-50 will be a premium rank VI helicopter in the USSR/Russian tech tree. The “Black Shark” will prove to be the perfect vehicle for many pilots thanks to its range of excellent characteristics one would expect to see in a top-of-the-line machine. There’s a lot to like here: great speed, responsive controls, decent cockpit defences against AA machine gun fire and, of course, a complete arsenal for taking out any type of target. The 30mm cannon installed on the right side may not have a full 360-degree firing arc, but to compensate for that, it can be loaded with a choice of either high-explosive fragmentation or armour-piercing shells. Its destructive power is more than enough to send anti-air guns, light ATGM carriers, and helicopters back to the hangar.

If you are planning an all-out assault on enemy aircraft, be sure to stock up on the air-defence system Igla-1V, which has the best rank among the air-to-air missiles in the entire game. The “Vikhr” ATGMs serve as the primary weapon for taking down armoured targets – you can bring up to 12 of those with you to battle, alongside other ordnance choices, of course. These new-generation missiles can easily take out state-of-the-art tanks fitted with an ERA system from a distance equal to 10,000 metres. The four suspended-armament points also allow the pilots to bring to combat things like unguided rockets, up to 1,000 kg of bombs and gun pods containing 23mm cannons – basically, the stuff that would keep enemy tank commanders occupied and sweating!

Last but not least, it’s impossible not to mention the Ka-50’s exterior design – its unique coaxial rotor build, smooth fuselage curves and aggressive dead-straight cockpit lines make this helicopter one of the most stunning and memorable in the game. Alongside the full armament set and all the modules, you will also get camouflages – the two-coloured green (default), cool black with shark jaws, as a pre-order bonus, and classic black could be purchased additionally. Beautiful, isn’t it?

Commenting is no longer available for this news
Rules
ThePotato27
129

*Sigh* another money milking machine. So what is the reason for this one being a premium and not a regular tech tree helicopter? Also i remember when gaijin clearly stated there will be no top tier vehicles in war thunder. Yet we have top tier tanks, helicopters and planes without any balancing what so ever not to mention overall insanely compressed battle ratings

Ka-50 was really only a short production run helicopter, so its more suited to this position as a Rank VI premium like other nations have received. Russia will have a mass produced (in far more numbers) helicopter as a Rank VII.

Smin1080p, Who is going to grind through the tree and multiple hinds when you can just hit the easy button and skip all of that? No one will grind for Russian Rank VII heli with thing as a prem. Please reconsider this mistake, it really isn't too late to stop.

Is this going to be another premium heli that will break Helicopter EC even more, just like when the Eurocopter was added?

10k my bad. The event helicopters with the bullpup us 11k

Your Desperation is showing gaijin. The fact that this is a premium is just disgusting. You cannot say you are a non pay to win game anymore

completely agree, then the compression of BR is another disgusting disappointing sucking reality

I bet you anything russia will get the Ka-52 for the tree and then you will have to find another thing to whine about cause you were wrong.

Why do we need this? nobody asked for this, the absolute last thing we needed was this. why was this added above all the million other things that could, and should, have been added? like the Vulcan bomber. there is no excuse to not have it now, we have mach 2 aircraft, it has been modeled in game before as a custom so we know it works and it would get british pilots back into bombing again. so why are we getting things we dont need instead of what we do need...

The Ka-50 has been a constant suggestion and request from Helicopter pilots since helicopters have been introduced. Please dont make blanket statements like "nobody asked for this" when its simply not true and really means you do not personally wish to see this particular machine. Thats a perfectly respectable personal opinion to have and we will have other things for you to look forward to in this update :)

How exactly would a jet bomber be more useful than this heli? Jet bombers always get blasted out of the sky with missiles and their objectives have no meaning. And how does this devblog mean we're not going to see more jets anyway? This is the first one only!

EpicBlitzkrieg87, This is 2019 war thunder, they will do what they always do, add nothing for the british, japanese, and french, and add absurd vehicles for the germans, americans and russians. garentee you will see a new russain tank coming up that we dont need. and the chinese tree wont be touched again for another year like the italian tree. and oh i dont know, maybe back in the day people actuially liked bombing? not now when you fly 10 minutes and get erased and loose 10k in lions. point is, they need to FIX

More like, you need to research the Adats, as the UK, German, French and Russian AA missiles cannot reach its 10k range.

IslandTeaService, They nerfed the SPAGM for a good reason when the Tunguska was first release in customs or Rb matches it was stupidly broken the shot didn't need to be anywhere near you to hit due to how much proximity fuse explosives it had and how it didn't have a range limit meaning it could snipe T2's hell possibly F4's if it was still like that

So you just want to kill top tier then? I thought the HAP was already making good work for that, but I guess it needs some help with that, the playerbase was still enjoying something about it.

Only the Adats can reach this thing.....

IslandTeaService, and the 2S6.. the Mistral... the Roland... ANYTHING WITH MISSILES that fires at air targets...

I know already that begging for fixes to come this patch won't work, so I'll say this. WT Devs and Mods, please, for the sake of the game's longevity, focus on listening to player feedback and fix the various concerns players have. Look at Digital Extremes, the deliver an enjoyable yet grindy experience but still manage to make money without strong-arming their playerbase. You can make a good game and still make money off it.

It’s sad that they started cutting corners on the game ;-;

Ok Gaijin now give me an English Electric Lightning or a Jaguar pretty please :c

As I said earlier, thirty year tech disparity for winged aircraft. What's the reason for this Gaijin, or do you just have more excuses?

Renamed69961, Harrier ftw Gaijin. Give me a reason to actually pay to play this game.

They are working on the lightning, this got confirmed. Just not ready yet, or at least, not announced yet :)

can we get low-er tier tank,not 10.0 and more helicopters,like this is nice but i dont know

they completly stoped listening to us, i just gave up hope for more ww2 vehichles after 1.91 when they removed german vehichles and one of them was replaced with another generic cold war tank

*RatnyciosDievas, and a Spaa which i've seen people enjoy but eh i'm surprised it did exist