HMS Dido is the lead ship of her class of light cruisers, built for the Royal Navy in the late 1930s and early 1940s. Having seen extensive service in the Mediterranean and Atlantic, HMS Dido is now headed for the naval battles of War Thunder and will become available to seasoned captains in the upcoming major update 1.85!

Dido-class light cruiser were designed in the 1930s as convoy escorts and destroyer leaders, intended for operations in the Mediterranean. As such, ships of the Dido-class had to be both large enough to operate in rough waters as well as fast and maneuverable enough in order to keep up with destroyers, whilst at the same time remaining relatively cheap to produce in large numbers.

HMS Dido, the lead ship of her class, was laid down in October 1937. In July 1939, Dido was completed and commissioned into service a year later. HMS Dido’s early service life was marked with convoy escort duties in the Atlantic, before joining the Eastern Mediterranean Fleet in April 1941.

As part of the Royal Navy’s Mediterranean forces, HMS Dido took part in numerous major operations, including the landings at Sicily and mainland Italy as well as southern France. During her service in the Mediterranean, HMS Dido performed various roles, from doing supply runs over evacuating troops to bombarding shorelines.

By 1944, HMS Dido briefly returned to Great Britain, before being sent off on escort duties as part of the arctic convoys. In 1945, HMS Dido was sent to Copenhagen, where the warship fired the last naval shot as part of the war in Europe, however not in anger, but in celebration of the surrender of the German Kriegsmarine.

Some time after the end of WW2, HMS Dido joined the ranks of the Royal Navy reserve fleet, remaining in service for another good decade. In 1957 however, HMS Dido was decommissioned from service and sold for scrap.

In War Thunder, HMS Dido will be a new light cruiser coming to the game with update 1.85 and will be available to all captains as part of the fourth rank of the British naval tree. Unlike HMS Enterprise that precedes it, HMS Dido sports less raw firepower, but makes up for it by offering greater combat flexibility, whilst protection and mobility remain roughly the same.

The first thing that aspiring captains of HMS Dido will notice about the ship, apart from its obvious visual differences from HMS Enterprise, is its completely different armament. Unlike the seven 6-inch guns found on HMS Enterprise, HMS Dido is fitted with ten 5.25-inch guns, spread across five dual turrets. As such, the more numerous and faster firing main guns of the Dido will compensate for the somewhat decreased punching power of smaller caliber shells. 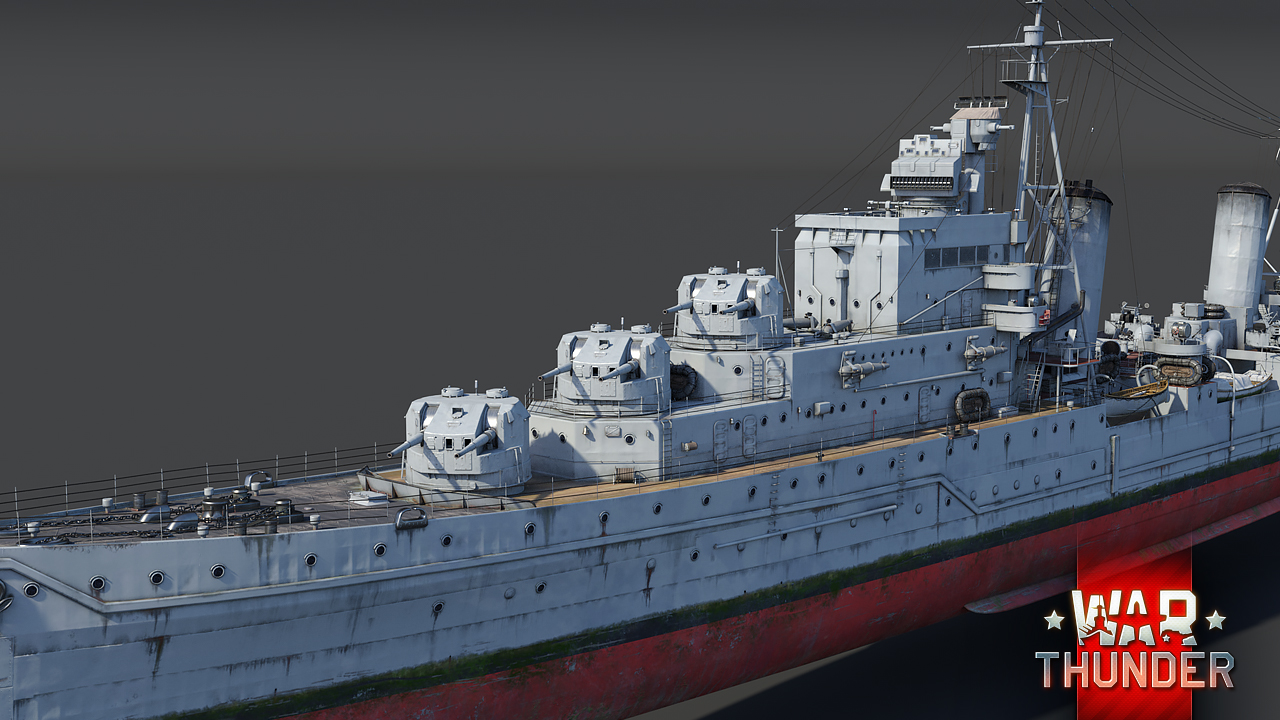 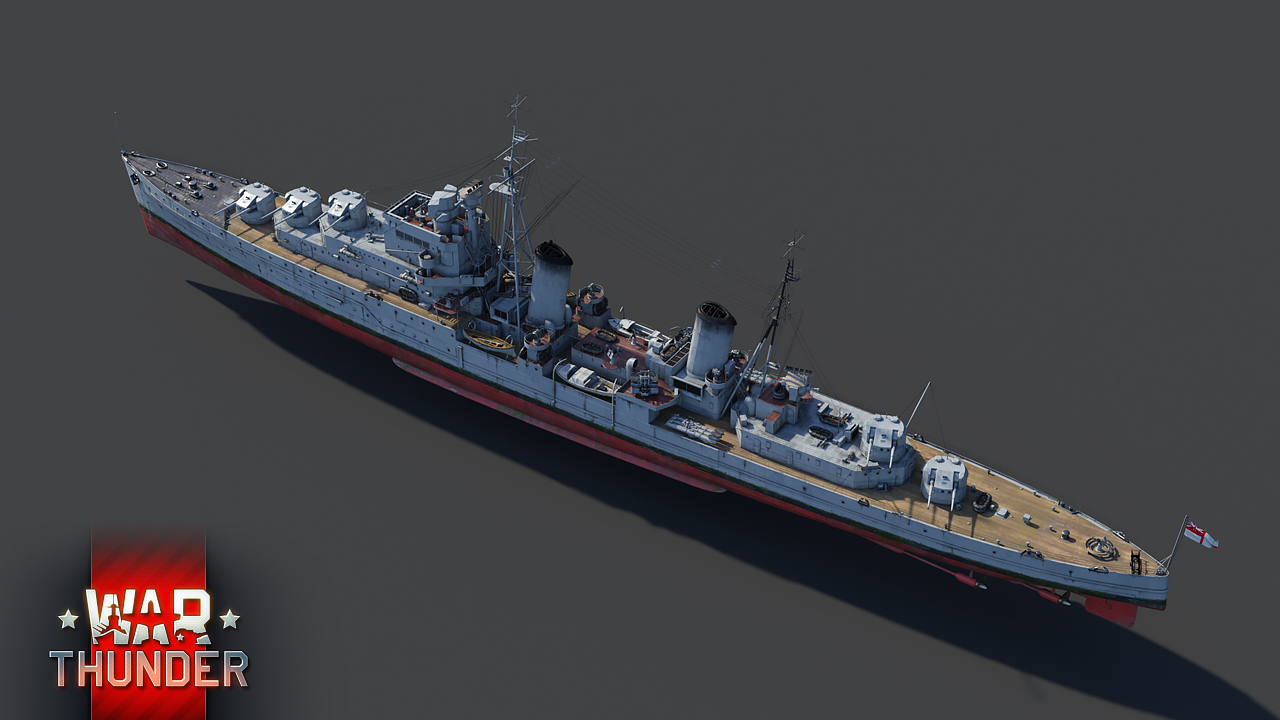 The secondary armament on HMS Dido, although adequate, might leave the occasional War Thunder captain wishing for more. For one, HMS Dido doesn’t have any smaller caliber dual purpose cannons. This means that aspiring captains of this ship will have to be more vigilant and constantly look for and deal with potential threats manually.

The anti-aircraft armament on HMS Dido, consisting of two quadruple 40mm cannons and five single 20mm cannons, is more than adequate to deal with aircraft and smaller surface vessels at close range.

HMS Dido is powered by four steam turbines, generating 62,000 shaft horsepower, allowing the warship to reach a top speed of 32 knots (60 km/h). When it comes to armor protection, HMS Dido is fitted with a very similar armor layout as HMS Enterprise, with the belt armor going up to 76mm in thickness. In regards to protection and mobility at least, future HMS Dido captains will barely feel the transition to a new vessel due to similarities shared with HMS Enterprise.

HMS Dido has firmly set course for War Thunder naval battles and is expected to arrive at player ports with the release of the upcoming major update 1.85 "Supersonic". In the meantime, be sure to stay tuned to the news in order to find out what the next update has in store for you! Until then, calm seas captains!

Commenting is no longer available for this news
Rules
SoloWing_Makarov
8

Okay but where's Atlanta for US?

AAAARONNNN, Try to guess which one given an info that this comment is under Dido.

I had to scroll down to find this

So, the Beta for UK navy will end with the new patch?

I don't have CBT access, and I could research their ships on the Dev-Server. So yeah, most likely :)

Yes, that was already clear from the latest dev-server.

Check out convoy mode on the dev server

AceofWWII, I believe it's on the main one too.

Get ready to get owned by Emden and Koln and not being able to sink a destroyer!

Enterprise can one hit Emden...

Babalonkie_UK, Anything can 1 hit an Emden.. But much, much less effectively than an Emden can one hit others. Also, compare shooting at an Emden with an Enterprise vs shooting at another Enterprise or a Trenton. I'm an Emden captain. I can definitely say the Emden is FAR more effective than other CL's at the moment.

You thought it was a Minotaur but it was I Dido

Beautiful ship! I've always wanted to play her, but it's not in World of Warships. Now I can finally play it here!