Designed initially to be a more reliable and low-cost alternative to the T-64, the T-72 quickly became one of the most mass produced and widely used Soviet MBTs of the Cold War. Coming to War Thunder with update 1.85 "Supersonic", the iconic Soviet Cold War MBT trio will finally be complete with the introduction of the long-awaited T-72A!

Briefly: A design derived from the T-64, optimized for mass-production and cost effectiveness.

In response, the Uralvagonzavod plant began working on a modified version of the T-64, which would use a more reliable and readily available engine, in order to provide the army with a tank fit for mass-production. Apart from this, changes were also made to the armor layout, in order to simplify production and decrease costs. This work resulted in the creation of the Object 172.

Development of the Object 172 continued, and after some trials, the vehicle entered service with the Soviet Army in August 1973, receiving its official designation T-72. Shortly afterwards, the vehicle was permitted for mass production, following the issuing of an official decree in 1974.

The T-72 was also heavily exported to and produced by nations of the Warsaw Pact as well as other countries worldwide, although these vehicles received certain downgrades compared to native Soviet models. Despite this, the T-72 quickly became one of the most widely used tanks in the world, participating in more conflicts than a single devblog could ever cover.

Since production began in 1974, over 20,000 T-72 tanks were built across several modifications in the Soviet Union/Russia alone, with production of more modern variants still ongoing today, even in other countries as well.

In War Thunder, the T-72A will become available with the release of update 1.85 to all players at the top rank of the Soviet ground forces research tree. The T-72A will represent a middle ground between the T-64A and the more advanced T-80B, giving tankers a new vehicle that combines certain familiar aspects of both machines.

As a derivative design of the T-64, the T-72 inherited many features of the T-64, including the most important one - the main gun. Being the familiar 125mm smoothbore cannon found on several Soviet top tier vehicles already present in the game, players will have no problems getting accustomed to the T-72A, at least when firepower is concerned. A notable difference however, is the use of a different autoloader, which only houses 22 rounds in its mechanism and loads individual rounds slightly slower.

However, one notable difference that sets the T-72A apart from its close relatives is the distinct missing ability to fire ATGMs combined with the usual selection of very potent chemical and sub-caliber rounds. Although this will somewhat limit the vehicle’s effectiveness at long-range engagements, the conventional ammunition types are still more than sufficient to deal with a wide range of possible targets. 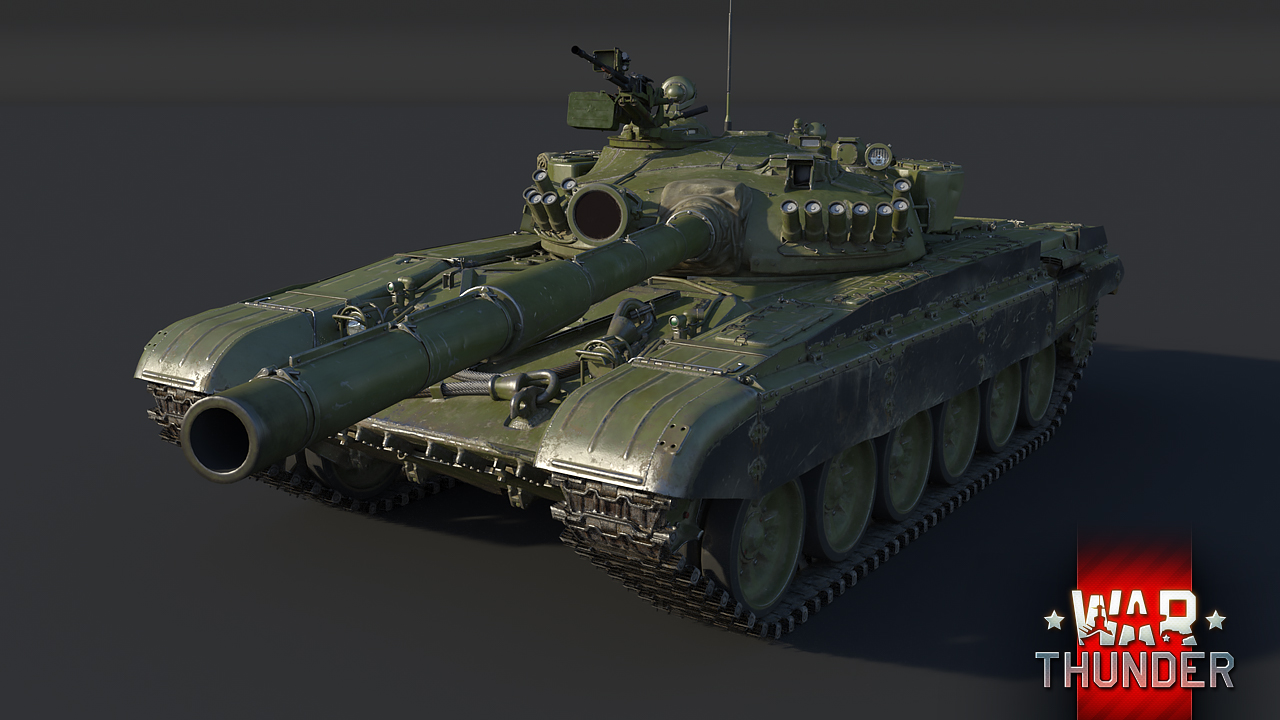 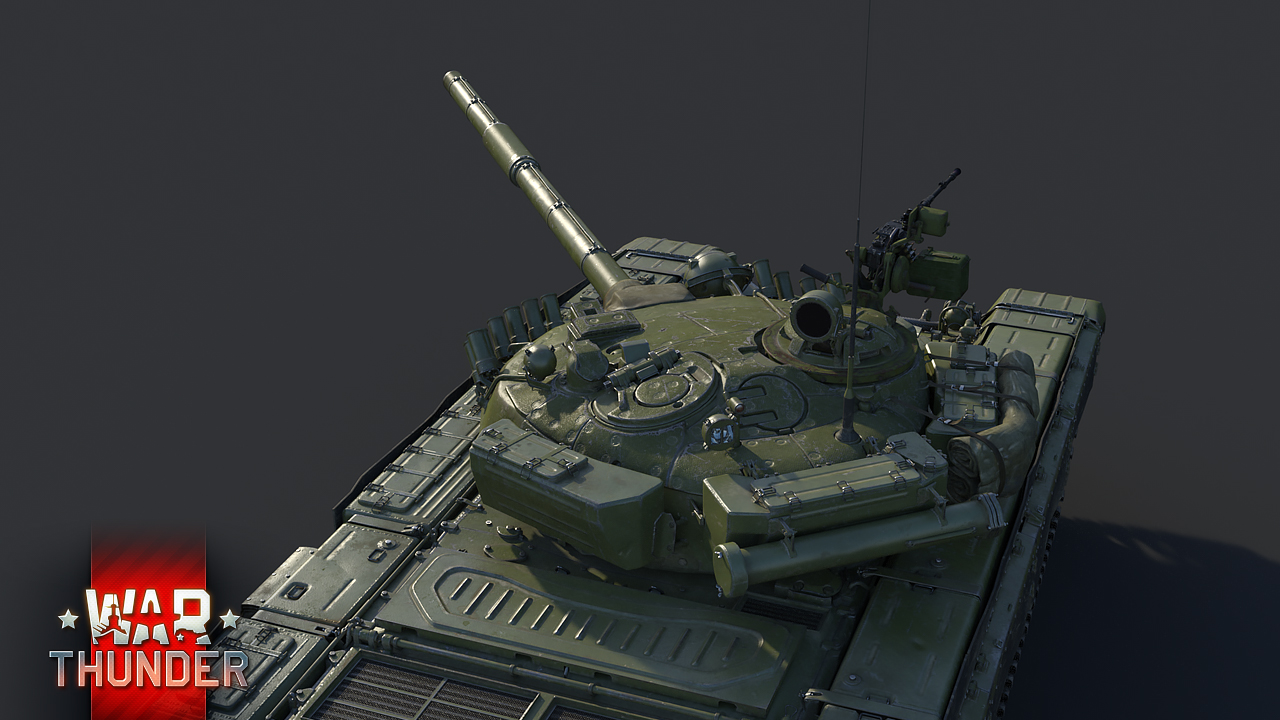 In terms of mobility, the T-72A is quite comparable to the T-64. Fitted with a 780 horsepower engine, the vehicle is able to reach a top speed of 60 km/h on roads. Although having a slightly more powerful engine, mobility will remain roughly equal to that of the T-64 as the additional horsepower will effectively only serve to offset the increased weight of the T-72A over the T-64.

Armor protection on the other hand is more akin to the T-80B. Being protected by a composite solution consisting of several layers of rolled steel and textolite, the front armor on the hull is able to absorb roughly 410mm of penetration from kinetic ammunition types and 450mm from chemical ones. The turret remains a tough nut to crack from the front, not only due its thick armor, but also due to its small silhouette. Therefore, the T-72A will be best protected against incoming fire when placed in a concealed hull-down position.

Fun Fact:  The Т-72А was nicknamed ‘Dolly Parton’ by the U.S. intelligence - an unknown “humorist” thought that the turret “cheeks” resembled the spectacular bust of the famous country-singer. The T-72B that had similar cheeks was later called “Super Dolly Parton”.

The much-anticipated T-72A will soon become available to all War Thunder tank commanders with the release of the upcoming update 1.85 "Supersonic". In the meantime, make sure to keep a close eye on the news in order not to miss out on more information regarding the next major update. Until then, happy hunting tankers!

Commenting is no longer available for this news
Rules
BabaBert
18

sure, spam out another russian tank, not like they already have the most top tier MBTs, while France, Japan, Italy, Germany or Britain have no more then 2 if atall

so what? Its not like the t72A will increase russia's competitiveness at top tier lol. It seems worse than the t64a in many aspects.

noskill_exe, exactly, they introduced a pointless, redundant tank to the russian tech tree while other nation are missing out completely

Ya they could add AMX-30 variants, the type 74 variant, the vickers mk 7 mbt, more leo 1 variants, the leone for italy. They seem to focusing on America and Russia while snubbing what is arguably the second largest part of their fanbase: Germany GF

von_Stauffenburg, Oh please.... GeRmANY Is SuFFEring. They literally just got a helicopter tree last patch and have a decent top tier, and had some brs lowered for a few vehicles and you think they're snubbing out germany?

Hope to see more modern/top tier vehicles for the smaller nations in the next few patches. Like for France and Japan. Italy to :)

Like what? The Leclerc for France, the Ariete for Italy and exactly what for Japan?

You need to putup more ads. The playerbase cant handle more gamemodes, that spreads out the players, it needs to grow, and therefor you need more advertisement for your game. Also, many players leave the game because the lack of a sufficient tutorial, not for how to drive/pilot your vechiles, but for game mechanics (SL, RP, GL, BR etc.) Please reply abput what youre going to do about this problem, as a fix is needed.

or they should stop the fake advertising and start advertisements on tier 1,2 and 3 vehicles. All those modern tank and helicopter advertisements are so fake, because it's going to take A LONG TIME for new players to experience what they saw in the advertisements.

This game is being andertised out of its mind. The bigger problem however is player retention, which is horrendous (even though they wont admit it). This game treats new players like garbage. Crappy tutorials (and no decent info about RB/SB) is one problem, having statpadder with 2.0 vehicles farming your reserves since 1st game is another problem (because only Reserved MM is apparently impossible to do).

Bless the Snail. Finally the vehicle I've been waiting for the most is here. 10/10 best patch ever.

looking great I hope we will see some other modifications of the T-72.. Very nice update Gaijin keep it up!

YES! 4th russian MBT meanwhile we are stuck with a single mbt for japan. So logical this.

With the best turret armor, reload and tank shell ingame... i wouldn't complain too much if i had that thing.

SPANISH_AVENGER, Still one it is dead you dont have anything remotely viable to spawn in at 10.0 . Including 1.85 it will be the 3rd patch with no backup mbt for japan. Even france has some viable options.. And then people complain when people leave after dying in their type90. As long as gaijin wont give a 2nd tank for japan ill just die and leave the battle.

Why even play Japan if they only have one tank then? Seems silly.

I hope shell ejecting animation will be fixed. T-72 isn't ejecting while shell, but only aft-cap.

Outbr3aq, It uses two piece ammo so theres no whole shell, the T-62 and T-62M-1 use whole shells