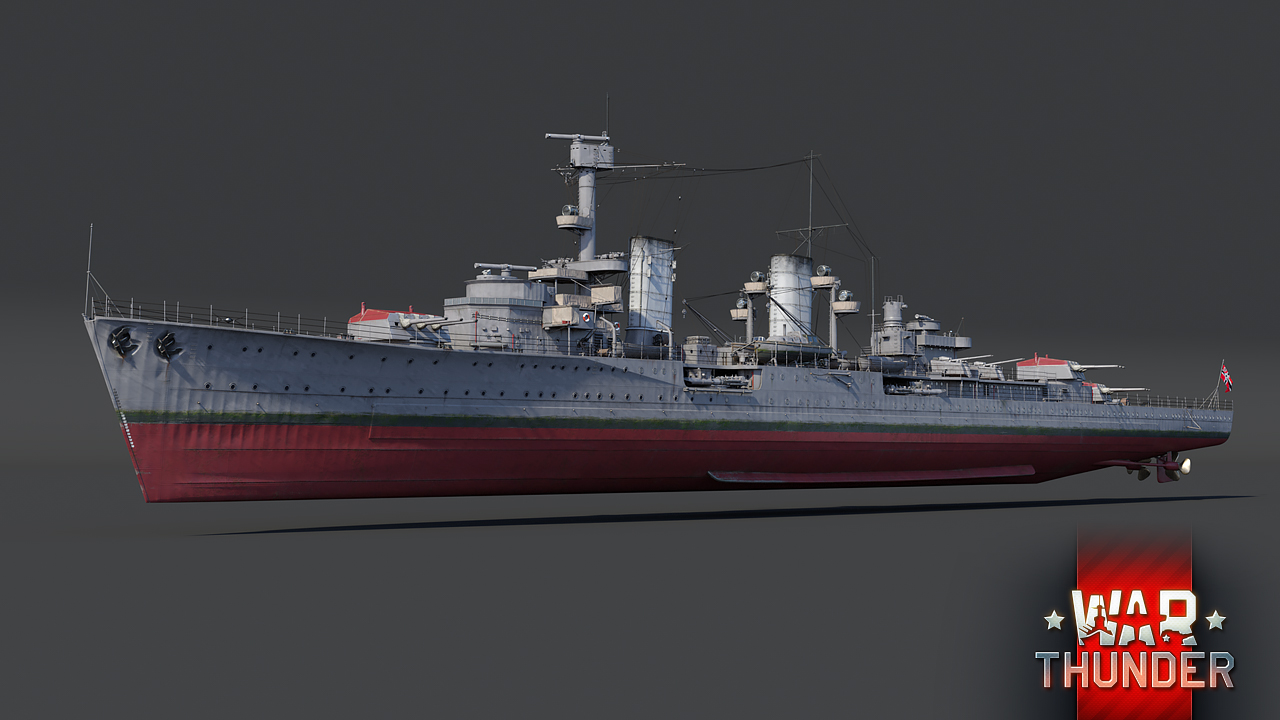 KMS Köln is the last K-class light cruiser, built for the German Navy in the interwar period. In update 1.85, War Thunder captains and fans of German warships may look forward to commanding this new addition to the German light cruiser roster coming to the game very soon!

Briefly: A light cruiser of the Königsberg-class, fitted with three triple main battery turrets and a plethora of secondary armament options.

KMS Köln was laid down in August 1926 in Wilhelmshaven as the third and final ship of the Königsberg-class of German light cruisers. Köln was ordered as a replacement for the old SMS Arcona light cruiser and was launched in May 1928, before being commissioned into service in January 1930. Her first years of service, KMS Köln spent undergoing various sea trials and acted as a training ship. In late 1932 however, the warship departed Germany for her first world cruise, stopping in numerous ports across the globe in the Atlantic, Pacific and Indian Ocean, as well as the Mediterranean Sea. Prior to the outbreak of WW2, KMS Köln took part in non-intervention patrols around the Iberian Peninsula during the Spanish Civil War. Upon completing her patrol missions, KMS Köln returned to the waters of the North Sea in order to conduct fishery protection. During WW2, KMS Köln primarily operated in the waters of the North and Baltic Seas, whilst occasionally taking part in operations in the Atlantic. Most notably, KMS Köln took part in Operation Weserübung in 1940 - the German Invasion of Norway. During this operation, both of her two sister ships were lost in combat, whilst Köln remained undamaged. Throughout the remainder of WW2, KMS Köln primarily took part in operations in the North Sea, mostly in Norwegian waters, running convoy interdiction and minelaying. In December 1944, KMS Köln suffered damage to her propulsion system caused by several near misses inflicted by allied bombers, close to Oslofjord. The damage forced her to return for repairs to Germany, where she eventually ended up in Wilhelmshaven again. There, an allied air raid damaged Köln further and led her to sink on an even keel. Only partially sunk and with the guns still operational, she was used as an artillery platform to help defend the city before the war ended. Although partially dismantled after the war, Köln was raised in 1956 and scuttled soon afterwards. 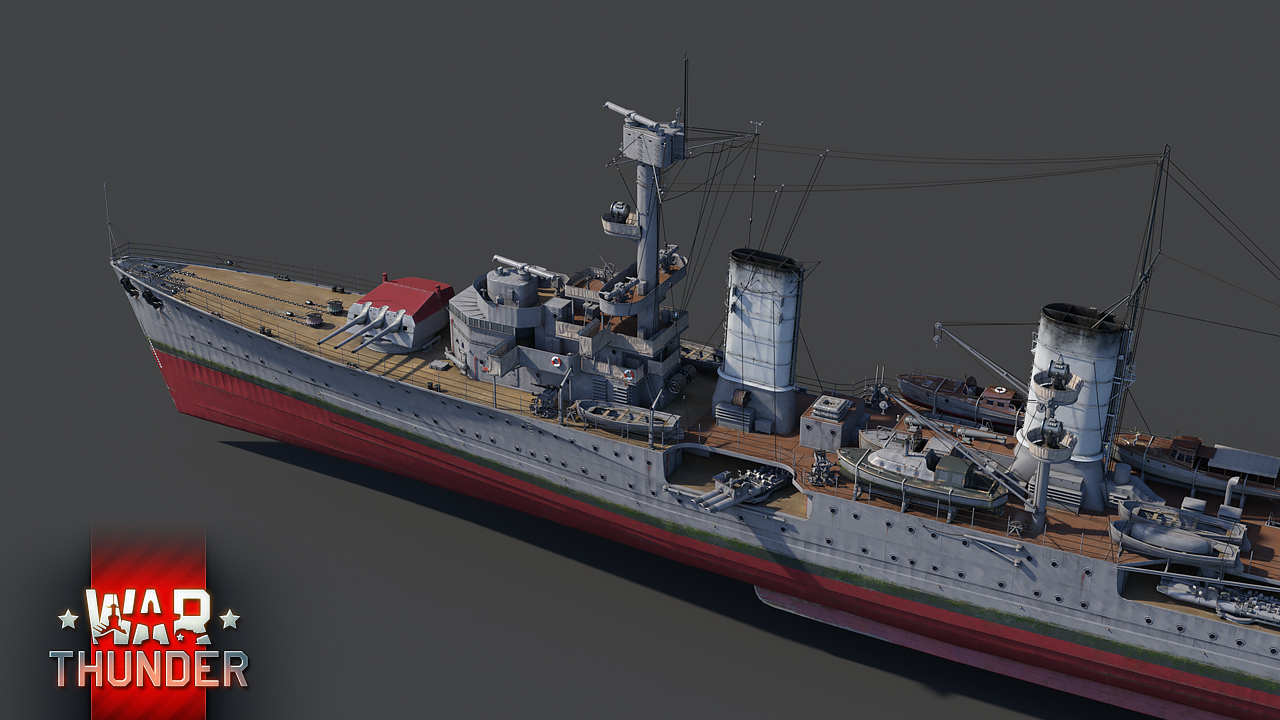 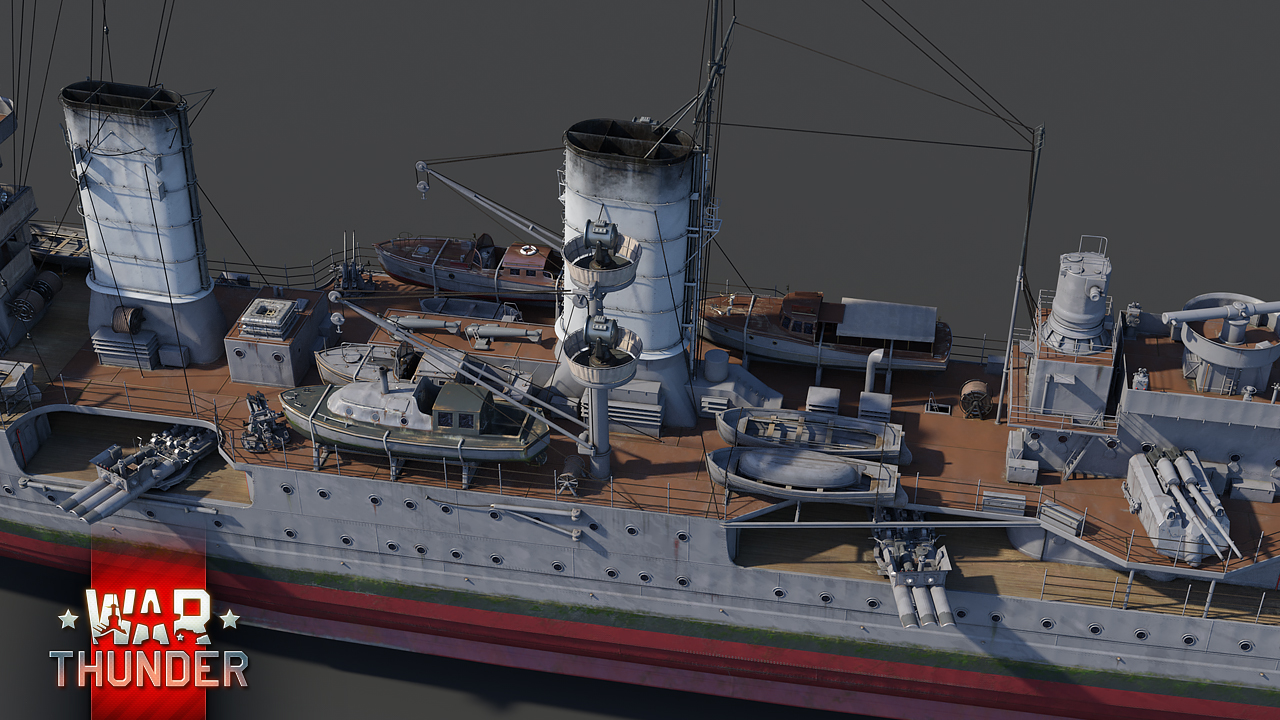 In War Thunder, the KMS Köln will soon become available to all seasoned captains, with the release of the upcoming update 1.85, as a new light cruiser of rank IV of the German naval tree. Faster and better armed than KMS Emden that precedes it, KMS Köln won’t just offer improved performance over the Emden overall, but it will also give German captains new tactical possibilities on the naval battlefield. KMS Köln is armed with a total of nine 150mm cannons, spread across three triple turrets. Not only does this make the primary armament on the Köln more numerous than that of the Emden, but it also allows captains of this warship to bring all guns to bear on a single target from one side.

Speaking of the turret arrangement, eagle-eyed captains who’ve already closely examined all renders in this devblog before reading, may have noticed a peculiar arrangement of the two rear turrets on the ship’s stern. Despite not looking like it, this design decision was made on purpose, in order to provide the two aft turrets with better firing arcs, enabling them to engage targets at much greater angles.

KMS Köln’s secondary armament consists of six dual purpose 88mm cannons, mounted in double turrets. Although these cannons are smaller than those found on the Emden, their greater number and higher rate of fire make them better suited for performing their task. Apart from the secondary armament, the airspace around the warship is closely guarded by four dual 37mm SK C/30 cannon mounts as well as eight single 20mm turrets. Additionally, captains will have access to two triple 533mm torpedo launchers on each side of the ship’s hull.

Glancing over the KMS Köln’s armor protection might, at first, reveal a near identical layout to that of the Emden, as armor thicknesses do closely resemble each other. However, KMS Köln does not possess the highly effective turtleback-style armor layout, making it a lot more susceptible to internal damage caused by penetrating shots. Instead, KMS Köln makes up for this rather large deficit by being able to achieve a higher top speed than the Emden, going up to 32.5 knots (59 km/h) compared to the Emden’s 29.5 knots (54 km/h).

KMS Köln has set course for War Thunder naval battles and will arrive in player ports with the release of the upcoming 1.85 update. In the meantime, stay tuned to the news for more information on the next major update coming to the game very soon. Until then, calm seas captains!

You have to be logged in for posting comments
*peachparaguayo
17

Can we expect a reduction of RP and SL requirements for Tier V aircraft because of the addition of Tier VI aircraft?

Yes, it was confirmed by Stona on the forum : https://forum.warthunder.com/index.php?/topic/435403-reduction-of-aircraft-rp-requirements/

Skydread, Thank you for the confirmation o7

So we'll be getting a GE refund based on the amount of RP change, as some players like myself will have spent GE on RP only to now be told that there will be reductions? Seems only fair considering it's the paying players that support this game.

expired_toaster, just be glad the game gets updated

Can we get a ammo reduction for top tier tanks??? currently, if you kill an abrams with a tam in one shot with APFSDS, you lose money.

Yeah this is really ridiculous... Some tanks literally need to fire non-stock ammo to do anything and a single shot costs like 1k, not to mention its borderline impossible to kill an M1 with a single apfsds

Except it's way out of its league and surpasses most other cruisers. Koln absolutely outclasses both Omahas, the Enterprise and probably (in some ways) the Krasny Kavkaz and Krasny Krym. This ship should not be in the game, or at least all other factions should have received a fair competitors! And what does the US get? ANOTHER OMAHA! Unbelievable!

Battlemage_1, Idk what ur smoking, but this ship looks deadlier than it actually is. Obviously its supposed to be better than the Emden, but ur high when u say its 'overpowered'. Next time, compare the differences and think before talking...

What's the reason behind it being called >KMS< Köln, not just Köln like it was historically

"KMS" is the German equivalent for the American "USS", British "HMS" and similar acronyms of other nations. It stands for "Kriegsmarine Schiff", or "Navy Ship" in English.

CokeSpray, except that it was never used

asked myself the same thing with the Emden

Can we expect reduction cost of repair for light cruisers alreday in the game?

Any news on when players can actually gain SL when playing top tier British? As an example I've played 10 games, won just over half, most of them getting at least one kill for every death or more, I had a net loss of SL. There was even one occasion when I came first in the team, had more kills than deaths (naturally), and still didn't make SL. Also, why does the Chally mk3 get a usable stock round but the mk2 doesn't? What happened to balance? (Also Mig 19 vs Javelin *Cough)

Be appreciative for what you just got instead of being immature and always asking for more...