The Yak-38 was a Soviet strike fighter with VTOL capabilities, developed in the early 1970’s by the Yakovlev design bureau for use aboard Kiev-class aircraft carriers. Soon, two of the more widespread variants of this highly interesting aircraft will join the top ranks of the Soviet aviation tree in the next major War Thunder update. “New Power”!

Although Soviet engineers were experimenting with VTOL fixed wing aircraft design since the early 1960’s, it wasn’t until December 1967 before a formal order to develop a light VTOL strike aircraft as well as a corresponding trainer version was issued. As a result, engineers at the Yakovlev design bureau began work on the new aircraft in the late 1960’s, basing their design on experience gained from developing the preceding Yak-36 - an early VTOL demonstration design.

The new aircraft, designated Yak-36M, was being developed for immediate frontline service, operating both from land bases as well as aircraft-carrying ships. The aircraft’s primary role was that of a strike aircraft, engaging ground and surface targets while also being suited to intercept enemy aircraft and helicopters if necessary.

Not too long after work on the project began, the first prototype saw completion and conducted its maiden flight in December 1970. Subsequent prototypes and trials continued testing the aircraft's performance, particularly its novel VTOL capabilities. By 1973, the aircraft was considered ready and serial production commenced.

After some further testing and crew training, the aircraft officially entered service with the Soviet Navy in August 1977, receiving the designation Yak-38. By 1982, over 140 Yak-38’s were built, all of which served aboard the then new Kiev-class aircraft carriers. In the mid 1980’s, the modernized Yak-38M version came into service, most prominently featuring more powerful engines as well as other improvements. About 50 Yak-38M’s were built before the type was ultimately decommissioned in 1991. 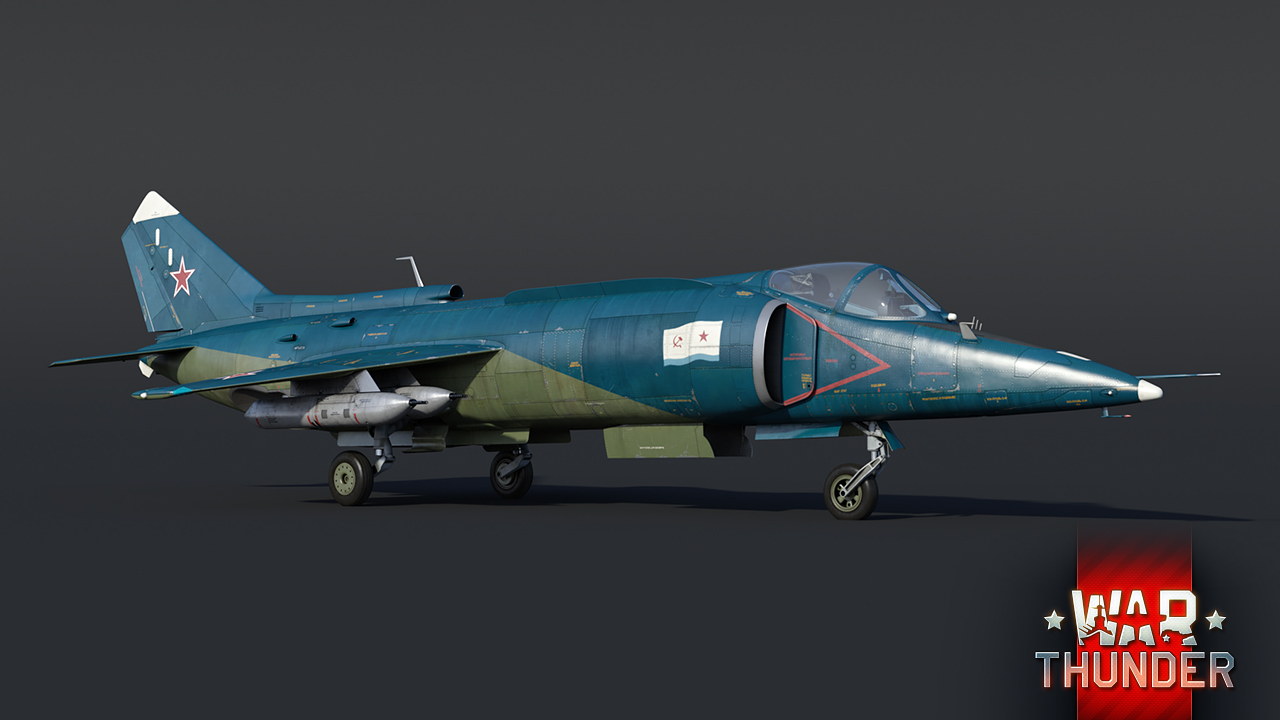 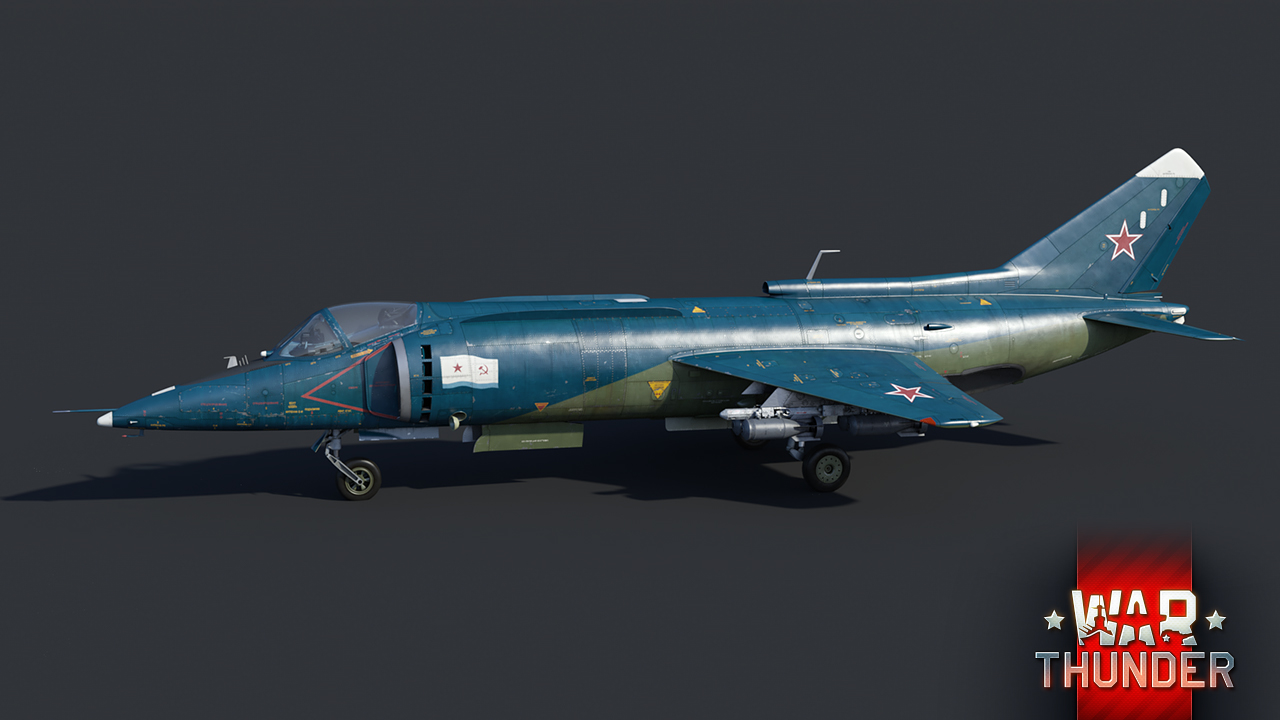 In War Thunder, the Yak-38 and its later modification is the Soviet response to the Harrier jet - also arriving in the game as part of the upcoming ‘New Power’ update and covered in a previous devblog. Unlike the Harrier however, the Yak-38 incorporates even more unorthodox design choices and offers its future pilots a greater selection of secondary weapons, which when coupled with its VTOL capabilities make it a true force to be reckoned with on the battlefield!

Among the most notable differences which distinguish the Soviet Yak-38M from the Harrier is the fact that the Yak-38M is powered by up to three jet engines, compared to the Harrier’s one. The main engine is a Tumansky R-28-300 turbofan engine, generating 7,300 kgf of thrust and powering the aircraft’s two rear thrust nozzles. The other two engines are a pair of Kolesov RD-38 turbojet engines, mounted vertically behind the cockpit and generating 3,250 kgf of thrust each.

The latter engines are used by the aircraft solely for VTOL maneuvering, whereas the Tumansky engine is used both for VTOL as well as generating thrust for forward movement. Pilots can easily observe this engineering symphony during VTOL maneuvers as large hatches open up on both the ventral and dorsal side of the aircraft allowing air to flow through the two vertically mounted engines, while the rear thrust nozzles get pointed downward, enabling hovering. Overall, the Yak-38M can reach a top speed of around 1,150 km/h in normal flight while also being able to get up to 450 km/h in hover mode.

Having established that the Yak-38M is no slouch when it comes to its flight characteristics, it’s also worth noting that the aircraft has access to a fairly powerful weapons arsenal too! The aircraft can be equipped with a range of unguided bombs and rockets, additional gunpods as well as guided munitions in the shape of the infamous R-60 AAM and Kh-23M AGM. This allows it to tackle a wide range of combat missions, from ground support to combat air patrol, with relative ease.

While the Yak-38M will be available to all pilots as the new top aircraft of the Yakovlev line in the Soviet aviation tree, the earlier Yak-38 modification will be exclusive to a special bundle available in our online store. Although the differences between the two aircraft are minimal, the Yak-38 most notably offers its prospective owners additional rewards thanks to its premium status as well as instant access to the new VTOL mechanics for pilots particularly eager to try them out!

The Yak-38 and Yak-38M are arriving in War Thunder as part of the upcoming update ‘New Power’ and will soon find their place at the top ranks of the Soviet aviation tree. In the meantime, be sure to stay tuned to the news as we continue unveiling what other exciting new additions await you in the update ‘New Power’ - coming very soon! We’ll see you in the next one, pilots.

Commenting is no longer available for this news
Rules
CLAYM0RE
7

All hail the VTOL Kamov

Beautiful. And when will you fix the R-60? So the MiG-21s and Yak-38s become quite good as they should be https://forum.warthunder.com/index.php?/topic/500993-vympel-r-60-aams-horrible-tracking-still-persistent/

Yak-38 was actually terrible though

Will the store packs for the Yak-38 and Harrier not have pre-orders?

Palmput, The explicitly say in this blog and the harrier one that this and the US harrier will be in the store and that only the UK harrier is a GE premium

What a cool looking plane.

So I can finally play this video while playing in a Yak-38? https://www.youtube.com/watch?v=1yFd8lx7vQI&t=92s

BEAUTIFUL PLANE!! i am so going to buy the premium one and the paint scheme is just gorgeous!