The M1128 Stryker MGS is an American wheeled AFV, developed in the early 2000’s as a bridge gap between existing heavier and lighter combat vehicles. Soon, the highly anticipated Stryker MGS will make its way to the top ranks of the American ground forces tree, arriving in War Thunder as part of the upcoming “New Power” major update!

Briefly: An American AFV of the 2000’s, developed to support infantry operations by combining the use of high mobility and deadly firepower.

Following the end of the Cold War, leading U.S. Army theorists believed that the armored branch of the armed forces was no longer suitably equipped to perform future operations, projected to be “low-intensity” operations. As a result, the need for a new vehicle, which would bridge the gap between heavily and lightly armored units, became increasingly apparent.

To address this, the Army issued a set of requirements for the new vehicle and invited close to a dozen manufacturers to design demonstrator vehicles to be tested in late 1999. Among them, General Dynamics Land Systems’ LAV III-105 was eventually proclaimed the winner of the competition in November 2000. Shortly after, the LAV III-105 received the name ‘Stryker’ and plans were made to manufacture over 2,100 units.

In 2002, the XM-M1128 MGS was built, however technical difficulties and deficiencies in the design caused delays to the start of its production. By 2005, low rate production of the vehicle was approved, while new shortcomings in the design were found. Eventually, the vehicle received a significant redesign of certain elements in 2008, being later approved for full production in 2014.

During its early production phase, several Stryker MGS vehicles were sent overseas for combat trials in the Middle East of which 3 would be lost. At present, over 140 M1128 Stryker MGS’ have been built and actively serve with the U.S. Army. 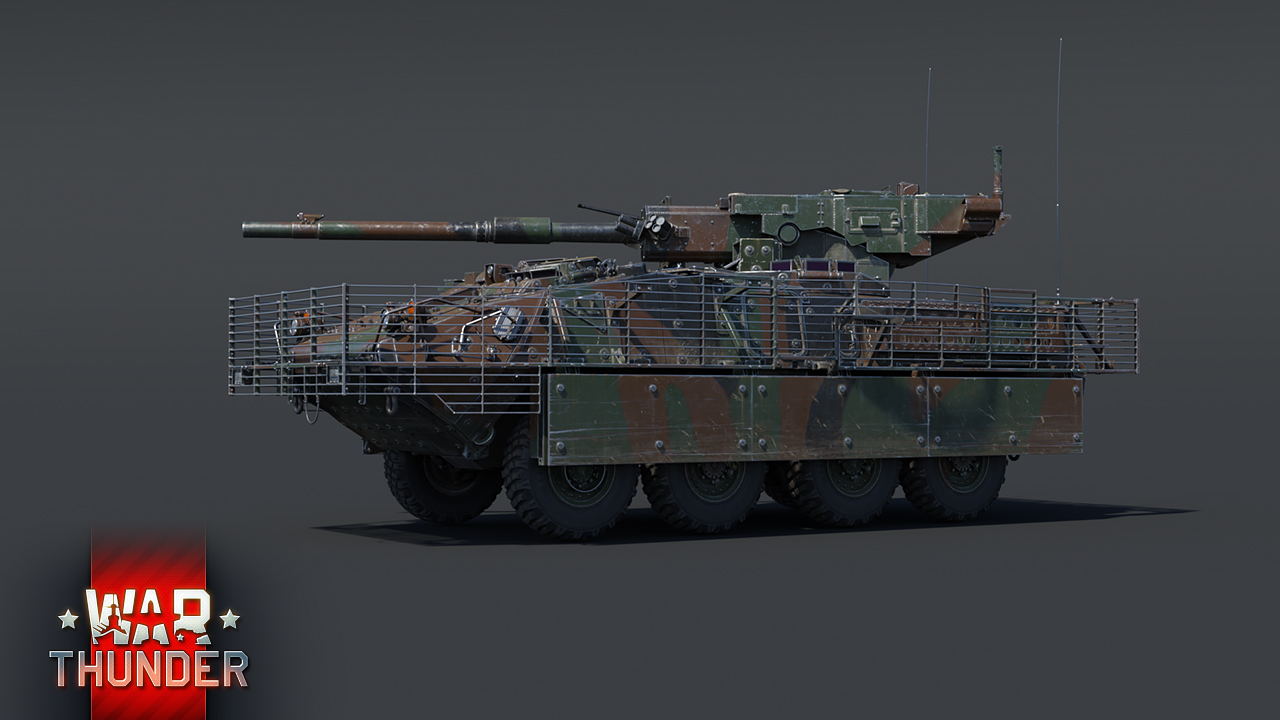 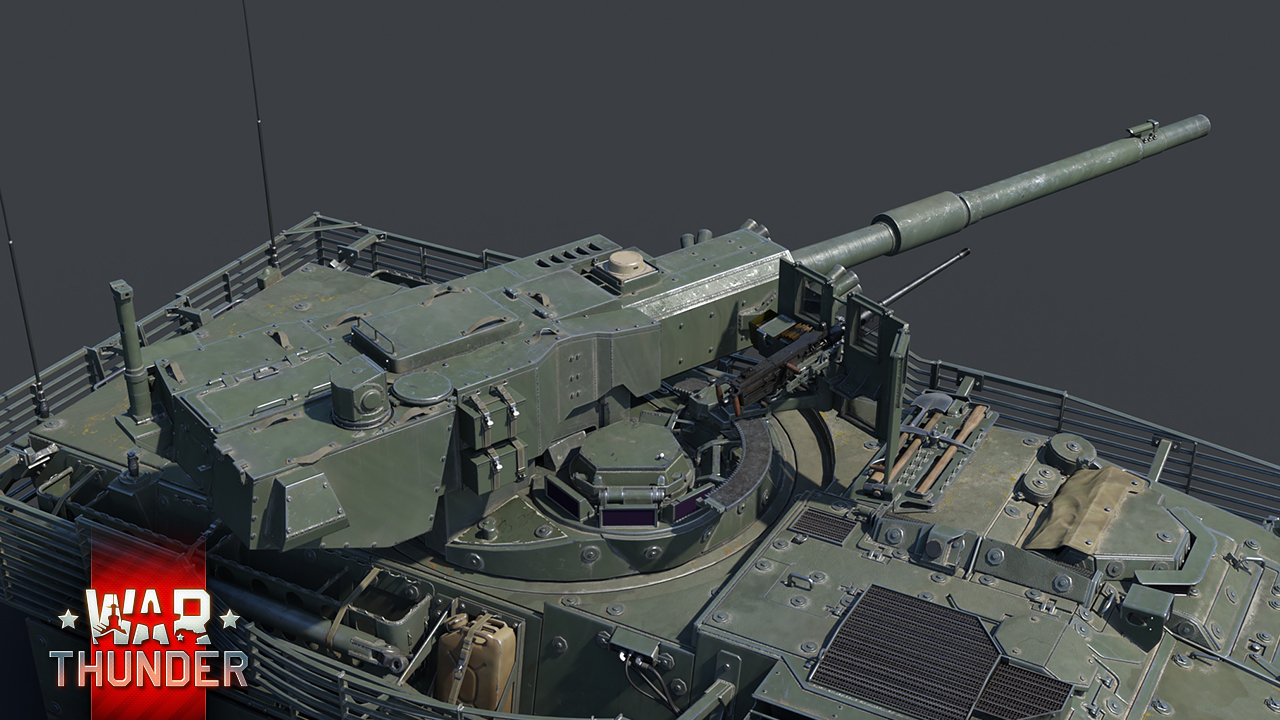 In War Thunder, the long-awaited M1128 Stryker MGS will finally make its way to the top ranks of the American ground forces tree with the release of the next major update “New Power” coming in the near future. With the arrival of the M1128 Stryker, American tankers will also receive access to a highly mobile and well-armed AFV, comparable to some of its counterparts found in other nations’ trees, such as the Centauro or Type 16 MCV!

The M1128 Stryker MGS is primarily armed with a 105 mm M68A1E8 cannon - a further developed modification of the M68 cannon, already familiar to most veteran American tankers in the game. However, the Stryker’s cannon does come paired with a novelty as far as this weapon system is concerned - a fully automated loading mechanism!

Fun Fact: The M1128 Stryker received its name after two winners of the Congressional Medal of Honor, bearing the same last name.

However being, at the end of the day, a wheeled armored fighting vehicle, the Stryker comes with the usual drawbacks associated with this vehicle class as well as some specifically tied to the Stryker itself. Namely, the Stryker MGS only has a very light amount of armor protection, meaning the vehicle can only reliably sustain hits from small arms fire and light cannon fire at longer ranges. However, large caliber cannons, as well as guided munitions, are bound to make short work of the lightly armored Stryker.

Furthermore, the Stryker only carries a rather limited 18 rounds of ammunition for its cannon, meaning that aspiring commanders of this vehicle won’t have too many chances to make up for missed shots. Therefore, be sure to use the machine’s fire control system to its fullest to make sure no round goes to waste!

The M1128 Stryker MGS is arriving in the top rank of the American ground forces tree with the release of the next major update, soon coming to War Thunder. In the meantime, stay tuned to the news as we continue revealing more new and exciting content awaiting you in War Thunder’s upcoming “New Power” update! Until then, happy hunting tankers!

Commenting is no longer available for this news
Rules
SPANISH_AVENGER
35

Who is ready to be hullbroken for being hit in the tip of a cage?

ready to get hullbroken by gently bumping into a tree

spooT, it is an annoying mechanic. I wasnt playing before it was in the game but I think its pretty dumb having my hstv or bradley destroyed by just being grazed by a shot.

I AM NOT ALONE

I don't usually ask for much, but for the love of god, make the slat armor optional.

Ikr it's ugly as fook. And it does absolutely nothing against APFSDS which everyone will be using. As for chemical rounds, why should bottom if they can hull break you with the turret shot.

Are you an idiot? That slat armor is there to prevent you from getting hull broken by HEATFS. If it weren't there ya'll would be bitching about it constantly dying from HEATFD

wow... americans always ask for addon armor like on soviet tanks now they get addon armor for free without modification and they want to remove it already LOL

GonZoWijnkaarsen, because there is a difference between having add on armor on an MBT vs add on packages on a light tank that already has an underpowered engine.

Should be a modification, yeah.

ScottishKoala_YT, I logged in for the first time in months to say this, but could we get a vid covering some early war german tanks that could be added to pad out German Rank I? Things such as the half tracks and Pz2J

With a self-propelled hullbreak xdxd

It'll be a lot less satisfying to shoot without the animation.

That unmanned turret reminds of something ... something I've been shown recently ... Yo, where's T14 Armata at? You adding that next patch?

Raiden_Black, Can it be too expensive for people to afford like the real one?

Thats the problem, that they only use Data of "old" 120mm ammo... even not the DU variants used since 30 years in US Army... same thing with german variants of ammo... germany doesn't have DU ammo.. they took the l55 barrel to compensate the pen of normal 120mm ammo.. the actual stryker 105mm ammo seems to me that the values are taken from the 105mm DU ammo... its strange that 10.0 to 10.7 M1 family hasn't this DU ammo in game...

Handlampe75, None of the big 3 have DU ammo, for a good reason.

Bllender, You do realize that the projectile itself is not 120mm in diameter correct? The 105 KE and 120 KE rounds are similar in diameter. The sabot around them is what is the real difference