Settsu was the second of two Kawachi-class dreadnoughts built for the Imperial Japanese Navy after the Russo-Japanese War of the early 1900’s. Being the first true dreadnought built by Japan, this formidable warship will also soon become the first battleship to arrive in the ranks of the IJN in War Thunder as part of the next major update “New Power”!

Following the end of the Russo-Japanese War in the early 1900’s, the state of the IJN was generally perceived to be unsatisfactory by high ranking Japanese officials. Furthermore, in terms of quantity and quality, the Japanese navy was lagging behind other naval powers such as Great Britain or the United States. In addition to all this, a severe economic recession following the war greatly reduced Japan’s ability to build new warships and expand its naval power.

Settsu was laid down in January 1908 at the Kure Naval Arsenal, launched in March 1911 and completed in July 1912. During WWI, Settsu served alongside her sistership, but seeing only limited action. In 1919, Settsu was put in reserve, receiving an overhaul before being disarmed in 1922 under the terms of the Washington Naval Treaty.

Shortly after, Settsu was converted into a target ship, keeping this role throughout the interwar period as well as WWII. In the end, Settsu was badly damaged by an Allied air raid on Kure in July 1945, leaving the ship beached. The ship’s hulk was subsequently raised and broken up for scrap in the immediate postwar years. 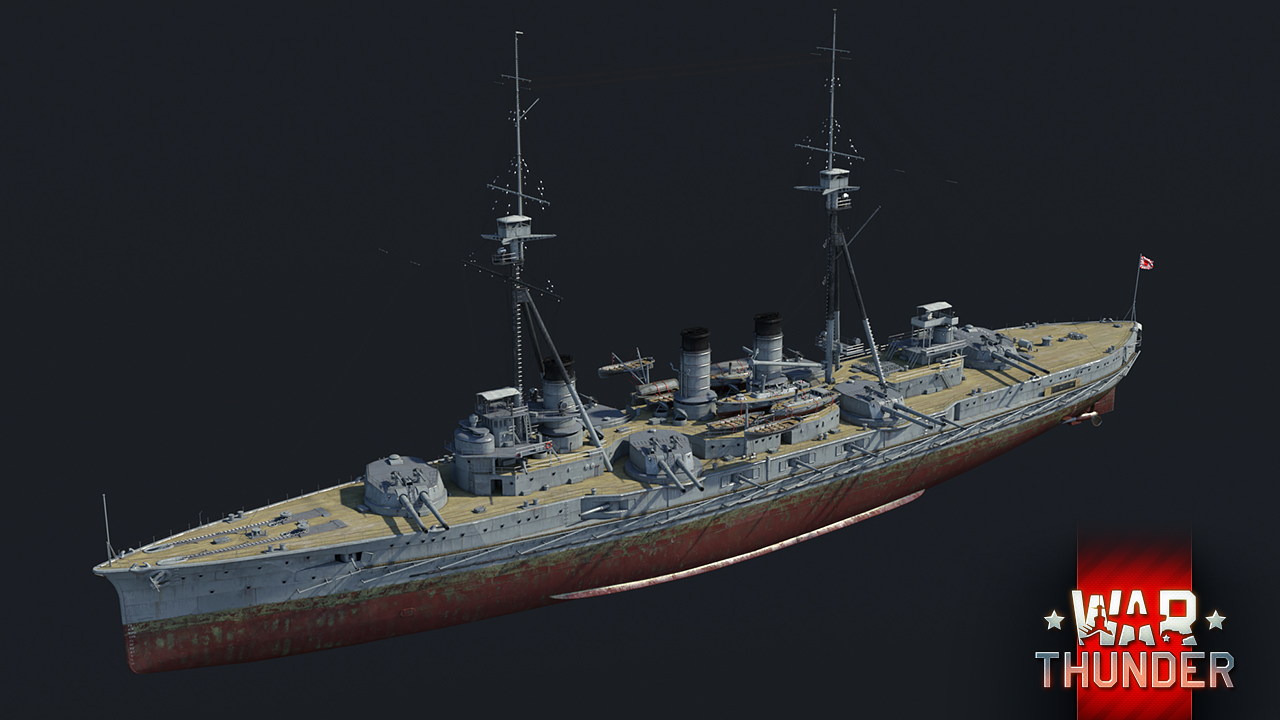 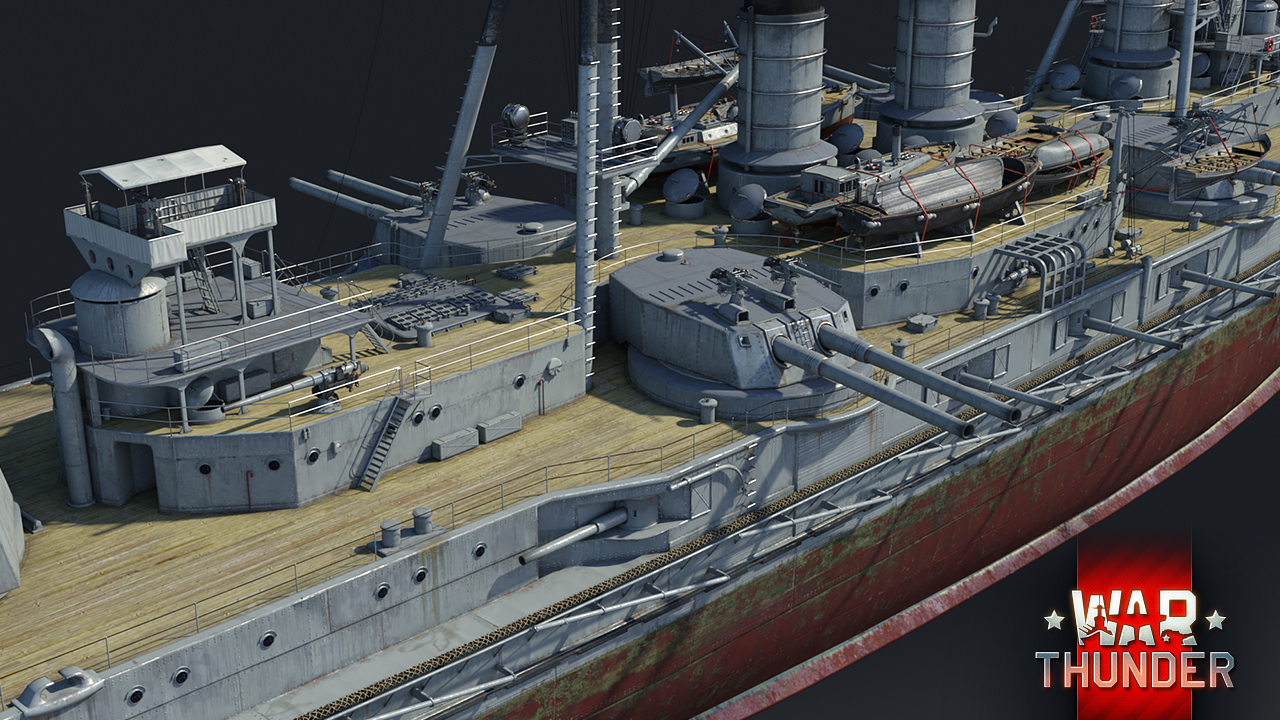 In War Thunder, Settsu will be the first battleship to arrive to the ranks of the Imperial Japanese Navy in War Thunder, following the release of the next major update. Similarly to other ships of this class, Settsu features extremely good protection and devastating firepower with the tradeoff being lackluster mobility.

Being a battleship, it should come as no surprise that the Settsu is extremely well protected. In fact, Settsu’s armored belt goes up to 305 mm in thickness, while the turrets and conning tower are encased in 279 and 254 mm of steel, respectively. This brings Settsu’s protection in line with other ships of this type, meaning that captains will be well-protected from incoming enemy fire from all but the largest of calibers.

Naturally, in order to include all this tremendous firepower and armor on Settsu’s design, Japanese shipbuilders had to make some concessions in mobility. As a result, despite being powered by a 25,000 horsepower propulsion system, Settsu can only reach a rather modest top speed of 21 kts (39 km/h). This, coupled with the lacking anti-air protection leaves Settsu largely vulnerable against air attack and smaller vessels, performing a torpedo attack. Consequently, aspiring captains of this warship will need to plan their movements in advance and seek the company of allies if they wish to avoid being turned into an expensive man-made coral reef.

Settsu will be arriving as part of the next major update coming to War Thunder and will become one of the first battleships available to captains in naval battles. In the meantime, keep a close watch on the news to stay updated on all the latest developments on the upcoming “New Power” update. Until then, calm seas captains!

All hail The Glorious Japanese Navy!

OST: https://www.youtube.com/watch?v=wa6xMGpGU8Y No, submarines not confirmed. I just like this song <3

Stona_WT, this song as hangar music when

Dozer15, Ohh, with the future funk! Interesting mash up lol

Said no winning team ever.

Fun fact: Settsu had anti-torpedo nets at one point. Because of it, I say it is not a dreadnaught battleship, but a fishing trawler.

It's still a dreadnought,but artillery observation with a broadside of different caliber length won't be that easy. Half of the broadside will land short.

[email protected], Maybe the devs have the 45s automatically adjust their elevation to compensate and we will just have to deal with the slightly longer airtime. That's what I'm hoping.

Will we see a comeback from Naval EC with the new update?

Japanese admiral: "Boy, it would be nice to have anything good for aa for Japan."

Dozer15, yeah type 93 is fun to play, zoom like a maniac and scout the whole team from bullshit spots, but its desgintaed as "anti aircraft" when it literally cant do that

Historically Japanese AA during WW2 even was barely capable of tracking and shooting down American planes of the time.

Drezworthy, I don't think this game is historical at all. Real life issues are not present in the game and thus this historical info is literally useless. Japanese ships need AA refits immediately because they can't protect themselves against aircraft compared to literally anyone with numerous AA.

Will we get the IJN Mikasa

I bet it will be a Prem

NatsuShirou, I sure hope so. And I'd pay any price! Been to Yokosuka three times and visited her, she's a beautiful old lady.

I would love to see her in the game, but I'm not sure it has a place there as a pre-dreadnought besides dreadnoughts as starting ships. It has bigger secondary battery, but does not have much else going for her, with only four main guns in particular.

its gonna premium! which is nice, su-7bkl here i come!

netanelyat, i would love for it to be premium, but what source indicated it is ? I don't want my hopes to be smashed..

check the russian carrier on the new carrier dev blog. The Yak-38 is sitting on the deck

[email protected], I know, it's just that it would be nice if they could show it off in its own devblog already.

Dozer15, well from the POV of a naval player its gotta be good? no? nobody plays naval? anybody...?

Don't worry, we are just as irritated when top tier gets another jet or tank 5% of people will play.