The Leopard 2A6 is a further development of the well-known German main battle tank, combining the superb protection of preceding variants with greater firepower. Soon, tankers will get the chance to command the modern Leopard 2A6 as it becomes the new crowning jewel of the German ground forces tree in the “New Power” War Thunder update!

Briefly: Based on the 2A5 modification, the Leopard 2A6 combines its predecessors qualities with a lengthened Rh 120 L55 cannon, sporting improved ballistic properties.

Following the rollout of the Leopard 2A5 modification with enhanced protection, German engineers, in cooperation with international partners, immediately began working on improving the MBTs firepower.

This was achieved by, among other minor modifications, lengthening the Rh 120 L44 cannon by 1,320 mm, thus creating the Rh 120 L55. As a result, the Leopard 2A6’s firing range was extended in addition to other ballistic properties being improved.

Production of the vehicle began in the early 2000s by converting older Leopard 2A4 and A5 models to the new standard. Initially, around 225 Leopard 2A6s were produced for the German Bundeswehr. Apart from domestic use, the Leopard 2A6 also sees service with Dutch, Canadian, Greek and Portugese forces, among others. In particular, the Leopard 2A6 was deployed with Canadian forces to Afghanistan in 2007, marking its first operational use.

The Leopard 2A6 is still in service today and, along with other variants, forms the spearhead of the armoured units of the German Bundeswehr. 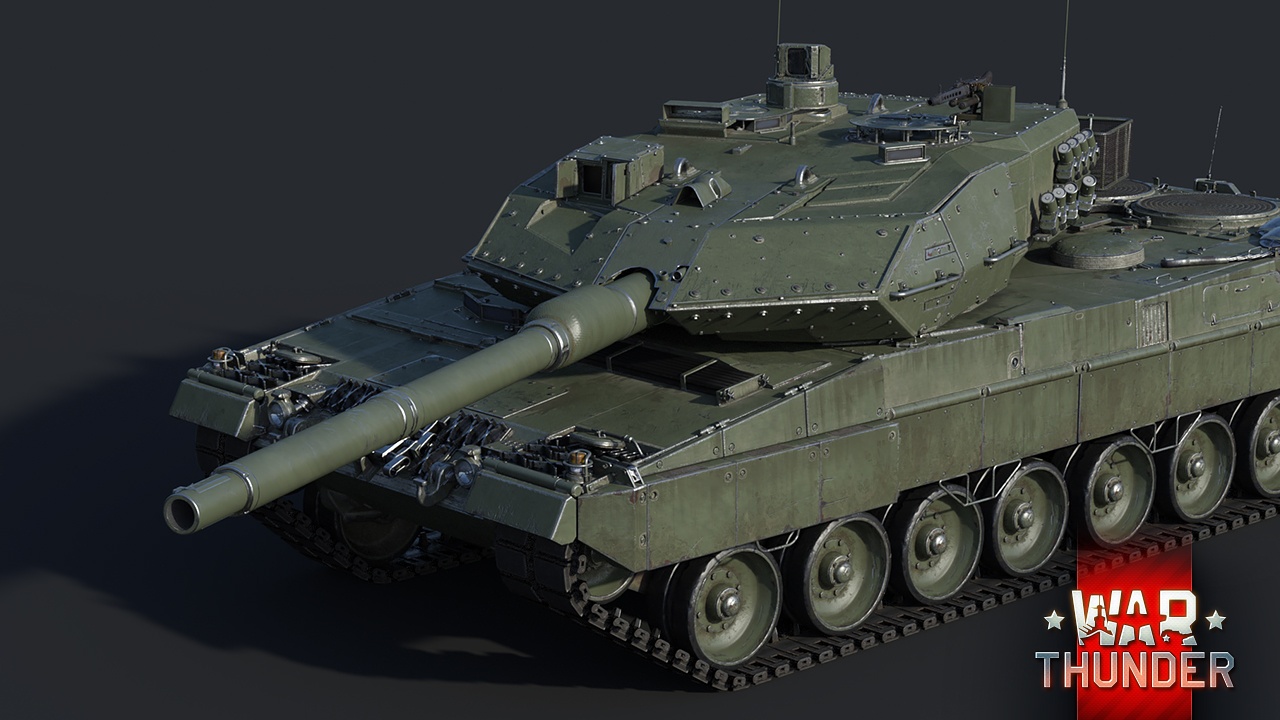 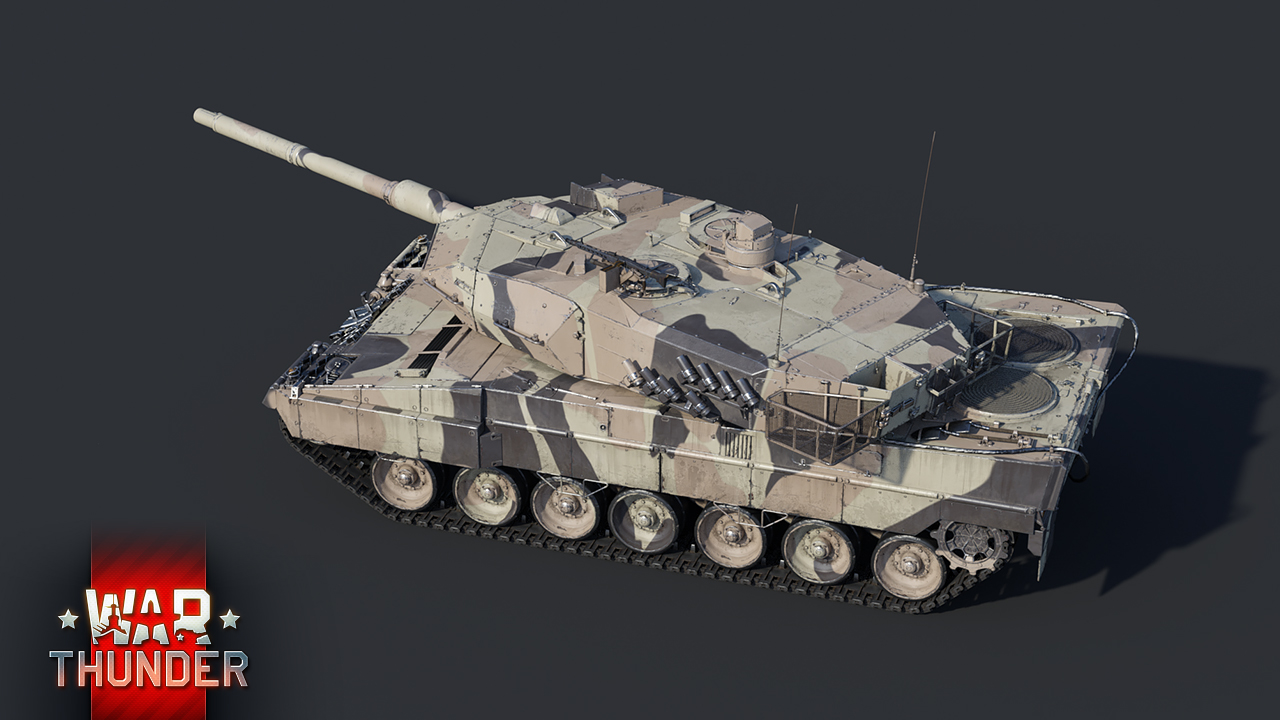 In War Thunder, the Leopard 2A6 will become the new crowning jewel of the German ground forces tree in the next major update coming to the game. Inheriting the crown from its respected predecessor, the Leopard 2A6 boasts the same qualities as the 2A5 which precedes it and combines them with improved firepower, courtesy of the Rh 120 L55 - a lengthened modification of the well-known Rh 120 cannon!

As already mentioned, the Leopard 2A6 retains all the features and performance specifications tankers are already most familiar with on the Leopard 2A5. The distinguishing difference between the two vehicles, however, is the presence of the new Rh 120 L55 cannon on the Leopard 2A6. This lengthened version of one of the most widespread weapons found on top rank vehicles features increased range and accuracy over the standard L44 modification thanks to increased muzzle velocity.

Furthermore, not only will the existing defining qualities of the Rh 120 cannon become even more emphasised on the Leopard 2A6, but it will also become even deadlier thanks to the availability of modern kinetic ammunition. As a result, the Leopard 2A6 will become more effective at destroying hostile armoured targets, thanks to its more powerful ammunition and improved accuracy at range. Thus, the Leopard 2A6 will well complement the existing German top lineup, joining it as a dedicated long-range marksman and a true force to be reckoned with on the battlefields in War Thunder!

The Leopard 2A6 will arrive to the top rank of the German ground forces tree with the release of the “New Power” War Thunder update, coming to the game very soon! In the meantime, be sure to stay tuned to the news as we continue to unveil what exciting new content the upcoming update has in store for you. Until then, happy hunting tankers!

Commenting is no longer available for this news
Rules
Spit98
35

Even with every NATO tank combine with 500-600mm + of pen, gaijin will still find a way to buff the russians and make them invincible lmfaooooo the only way i've been able to kill them is with rear penetration from an m22

It's a pity that's not a real Leo 2A6, it's only a upgraded 2A5. As you can see from the configuration of the smoke launchers.

Make A Bug Report I'd Say.

ShimakazeChan, it's not completely wrong, because the German army used them also in this configuration

Except early 2A6s had the same config as early 2A5s.

Reapercore2, Because the early ones were just conversations from 2A5

Now can Japan get the type 10 please?

Sadly no type 10 this patch, however the Type 93 SAM is gettign its missiel fixed

Minibucket, how about both? china and japan are both in need of actually viable tanks, you shouldnt push 1 for the other.

When will the Yak-38 and the Yak-38M devblog comes out?

So you just copied A5 version and put longer barrel on it. That A6 does not look like our version of it. I hope you at lest fixed turret seating.

It's a pity that's not a real Leo 2A6, it's only a upgraded 2A5. As you can see from the configuration of the smoke launchers. But they made the correct drive hatch. They mixed it completely with the different types.

Painman, He knows it's not 2A6 that we want. Gaijin didn't said anything about protection, meaning that this is not the A6 that is an actual step up from A5, with next generation composite armor. Fucking bs. That extra penetration does nothing honestly, if I wont be able to penetrate T-80 and T-72's from up front through ERA, then this is the most disappointing introduction of a new MBT. This might as well be the premium and for research we need real 2A6.

daym she look smexy as hell