HMS Dreadnought was a British battleship from the early 1900’s that revolutionized  warship design with its many innovations, setting a standard for a whole generation of warships to come. Soon, this naval legend will be joining the ranks of the British naval tree as one of the first battleships to come to War Thunder as part of the “New Power” major update!

Briefly: A pre-WWI British battleship, which incorporated a number of innovations that made it so technologically advanced that it redefined a whole warship class.

At the turn of the century, notable developments in all aspects of naval warfare could be observed, ranging from gunnery practices over torpedo design to propulsion systems. HMS Dreadnought, as it would become known, was developed to take advantage of these latest developments, in particular, by incorporating a steam turbine propulsion system and by adopting a so-called ‘all-big-gun’ weapons arsenal.

The latter in particular, meant a unified calibre main battery, thus moving away from the common practice of installing multiple calibres of weapons aboard a large warship, which proved increasingly inefficient. In a similar fashion, HMS Dreadnought was to become the first warship to be fitted with steam turbines, giving her a greater speed than any comparable warship at the time.

HMS Dreadnought was laid down in October 1905, launched in February 1906 and, after undergoing sea trials, commissioned into service with the Royal Navy’s Home Fleet as its flagship in December - just fifteen months after it was laid down. Immediately after entering service, HMS Dreadnought virtually rendered all older battleships obsolete due to its advanced design, thus also kicking off a naval arms race, most notably between Britain and Germany.

During WWI, HMS Dreadnought saw little action, in fact missing the critical Battle of Jutland in 1916 as the ship was carrying out other duties. Although designed to defeat other battleships, HMS Dreadnought’s most famous encounter with hostile forces was the sinking of the German U-Boat U-29 by ramming it in 1915!

After the war, HMS Dreadnought became surplus to requirements as more and more modern battleships took her place. After a brief postwar service, HMS Dreadnought was sold for scrap in May 1921. Although the mighty warship was ultimately broken apart, its construction represented such a milestone in naval development that history remembers it as nothing short of a naval legend. 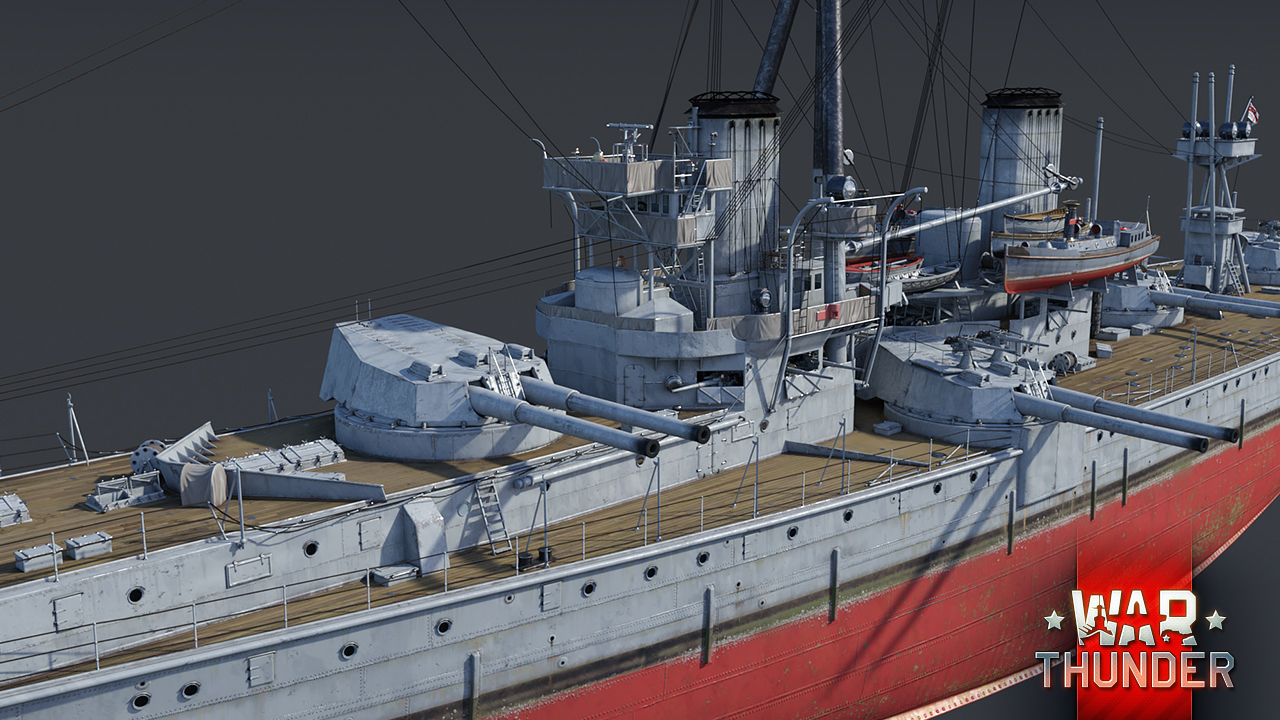 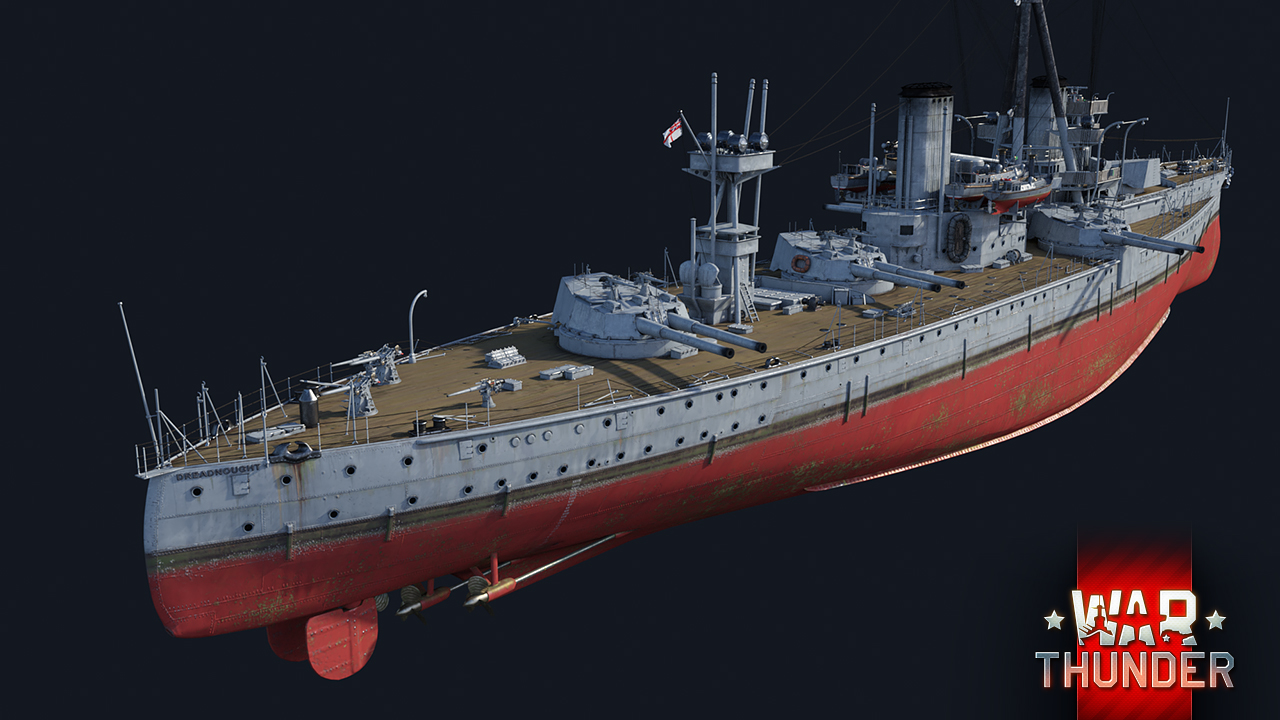 HMS Dreadnought will not just be one of the first battleships to join the ranks of the Royal Navy, but also among the first vessels of this type to arrive in War Thunder. With its powerful guns, heavy armour and steadfast mobility, HMS Dreadnought represents everything battleships are known and respected for and, just like its real-world counterpart, signals the start of a new era for War Thunder’s naval forces!

Of all the battleships set to arrive as part of the next major update, aspiring captains of HMS Dreadnought also won’t have to fear being woefully outgunned by their opposition. Namely, the warship comes equipped with a formidable primary battery consisting of ten 12’’ (305 mm) cannons, split into five twin turrets. While it’s indisputable that captains should have little trouble piercing through the armour of most opponents they meet with such powerful guns, the drawbacks of such a heavy calibre should definitely also be considered. Namely, the slow rate of fire and inability to direct fire from all guns to a single target due to the particular gun arrangement found aboard HMS Dreadnought limits the ship’s flexibility in combat significantly.

Additionally, HMS Dreadnought is also fitted with 20 3’’ (76 mm) secondary battery guns, primarily intended to keep audacious torpedo boat captains at bay with their high rate of fire. For good measure, aspiring captains of this warship will also have access to two 18’’ (450 mm) submerged torpedo launchers which can be reloaded multiple times in battle. However, like many other vessels at its time, HMS Dreadnought wasn’t well-equipped to deal with the potential threat posed by aircraft: a fact reflected by her rather weak anti-air armament of just two 3’’ high-angle AA guns.

If captains happen to be already quite impressed by Dreadnought’s firepower, just wait until you hear of the armour protection! Sporting an 11’’ (279 mm) thick belt and barbette armour as well as 11’’ (279 mm) thick turrets, HMS Dreadnought is overall well protected and particularly shielded from armour piercing rounds fired from cruisers or even destroyers. However, it’s also worth noting that despite its good protection, HMS Dreadnought is far from invincible and even smaller calibre fire can, if persistent, attrition the warship’s rather modest crew of ‘just’ 810 sailors over time.

As most captains are already aware of, large guns and thick armour do tend to increase a ship’s displacement - usually by quite a margin - and HMS Dreadnought is no different in this regard. Displacing over 20,700 tons at full load, HMS Dreadnought will most certainly be one of the ‘bigger fishes’ floating on seas in naval battles in the upcoming update. Thanks to its, at the time, revolutionary use of steam turbine propulsion, the warship can accelerate up to 21 knots (39 km/h). While this is a more than respectable top speed for warships of this class, it goes without saying that HMS Dreadnought can easily be outmaneuvered by smaller and nimbler vessels, meaning that captains should always make sure to have their flanks covered by allied vessels to avoid being outflanked by the enemy!

HMS Dreadnought will be one of the first battleships War Thunder captains will have the chance to unlock and add to their fleet, following the release of the major update “New Power”. However, HMS Dreadnought won’t by far be the only one coming, so be sure to stay tuned to the news to find out more. In the meantime, calm seas and good hunting captains!

Commenting is no longer available for this news
Rules
DutchViper_NL
45

We are being reinforced by a Dreadnought.

here have a 5th

Torva_Messor, a 5th of what? British ship, so must be Gin or Sherry?

Hi BB, nice to have you here!

@Stona_WT in the Fleet Research Changes and First battleships dev blog . In the Video at 1:40 there was USS Alaska in that scene so is new Battle Cruisers confirmed for the US ?

Deadsnake_war2, That is not USS Alaska, rather that is USS Delaware (BB-28). It matches the video exactly, even to the placement of the life boats.

Not BB but better, a Dreadnought.

then i'm just not good enough down there :(

BoanezGamer, long and thin will get you in but short and thick will do the trick

Just like the real-life story of HMS Dreadnought, nothing in naval combat will be the same after it comes. Cheers to a new era of WT naval, and the new tree layout to help players get to this beauty. I'm putting my faith in you on this one, Gaijin; The future of this mode and it's playerbase is in your hands.

IMO the new tree layout means nothing, what I want to know is how battles will change, as in will deep water maps be made? will it be 2 separate game types (1 for small boats near islands and another for the big ships out at sea)? will we ever get to see rough weather and seas again? (small boats could hide between the waves if sailed right) I want to see more weather conditions, big waves, fog, storms. the tree is nothing but a band aid if it is just a tree change

CoachJester, with rough seas would be even more interesting like a frequent issue for Navy in WW2 was when severe seas in hurricane conditions could swamp the smaller escorting vessels would be a great if not pain in the ass environmental dynamic! like it shits me with the whole beached or sinking Physics not being able to be counter acted by basic common sense like if your beached either your cannon fodder or a lil beach bunker at that point so shouldn't have a stupid timer same with sink and capsize timer

It was fine, don't crap at your original naval player base gaijin please

ArchdukeFranzRip, It was most definitely not fine lmao Old tree was awful

Pan_Heheszki, it is how the English language works. They use "she" for ships.

This is the update I have been most hyped about in a long time by now!!!!!

Gotta wonder how well this ship is actually developed when the primary comments are from Gaijin patting itself on the back. I recommend players reserve their praise for actual performance instead of puckering for gaijin's posterior.

agreed, gaijin appears to be pre-stuffing the ballot box here.

its embarrassing how gaijin staff are recruited to pump up releases in blogs...let your toadies and fanbois.

opqo, damn i noticed that...., why are the mods and admins just the one on top cheering for it.

very cool. maybe something Italian next? they currently have the least vehicles known about.

ok thats nice and all but you gave russia 4 top tier tanks while japan got the worst SPAA in the game and some dudes playing peekaboo behind a gun. any bevdlog for japan this update?

china has the worst spaa, it doesn't even have a radar.

DerpGerp, "worse spaa" still has a bloody lot of tank killing potential and vt shells. its gun system actually works. the spectator simulator that its the type 93 has no forgiveness for being allowed into the game in its current state. Wait in time wait in line, china will get its stuff.

I don't even know why people play China. I won't until they separate the line in two. Taiwan/China.