USS North Dakota was the second of two American Delaware-class battleships, built by the US Navy in the late 1900’s as a response to the appearance of dreadnought-type battleships. Arriving with the release of the “New Power” major update, USS North Dakota will become one of the first American battleships available to captains in War Thunder!

Briefly: Heavily armed and well-protected, USS North Dakota is a typical battleship of its era and the first ship of its class to become available to American captains in the game.

When the British Dreadnought was built, the United States had been completing their own “all-big-guns” battleship, the South Carolina class. Despite the fact that the new ships were not generally inferior to the British competitor, they were criticized for their small hull size and weak auxiliary artillery.

As a result, the Delaware-class battleships were developed during the mid 1900s. Being larger, better armed and more protected than the preceding South Carolinas, the Delaware-class battleships were ordered for construction and laid down in 1907. The two ships of the class, USS Delaware and USS North Dakota, were both commissioned into service with the USN in April 1910. Although sister ships, USS North Dakota featured a different propulsion system than USS Delaware - namely a steam turbine instead of a traditional steam engine.

Both ships saw only limited action, despite serving through the WWI period. While USS Delaware was operating overseas in European waters, USS North Dakota was kept close to the American shoreline due to concerns about its novel propulsion system. Following the end of WWI, both ships mostly continued their peaceful service until the signing of the Washington Naval Treaty in 1922.

Upon the treaty’s signing, the Navy’s strength was limited, particularly in battleships. As a result, both of the Delaware-class battleships were gradually put out of service during the 1920s while newer battleships were built to replace them. USS Delaware was broken up for scrap in 1924, while USS North Dakota  eventually met the same fate in 1931, after serving as a target ship for several years. 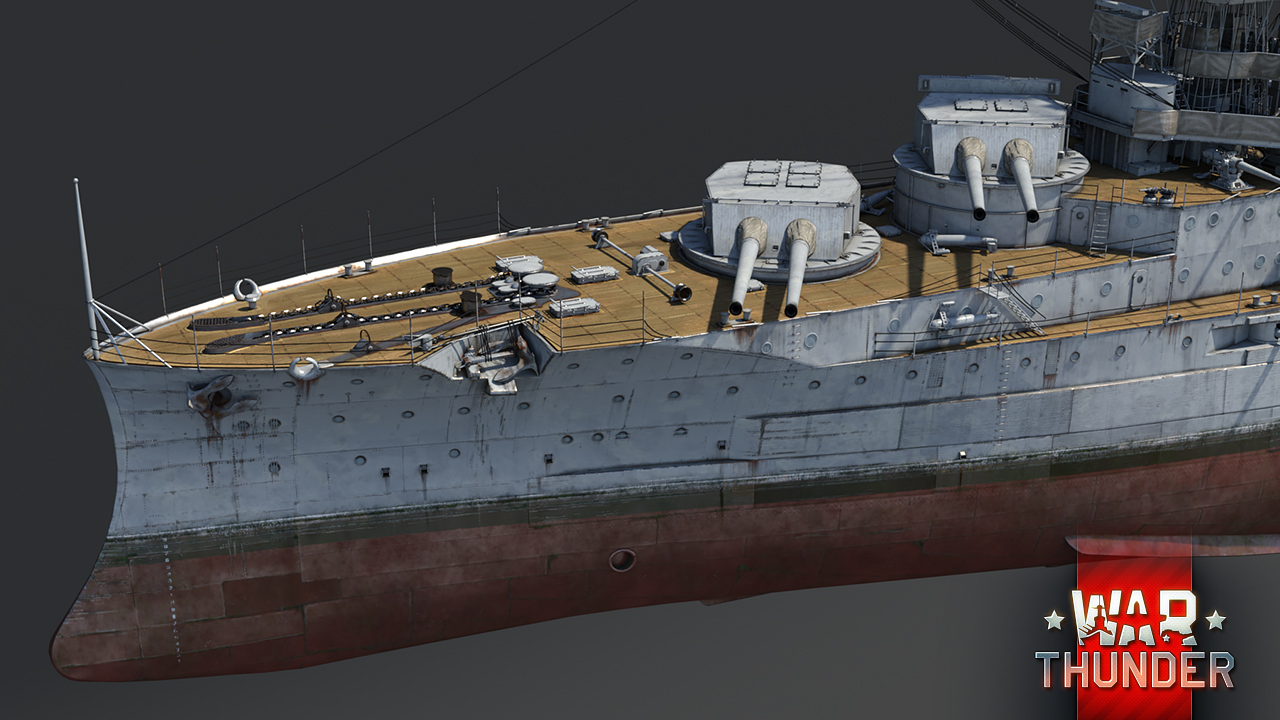 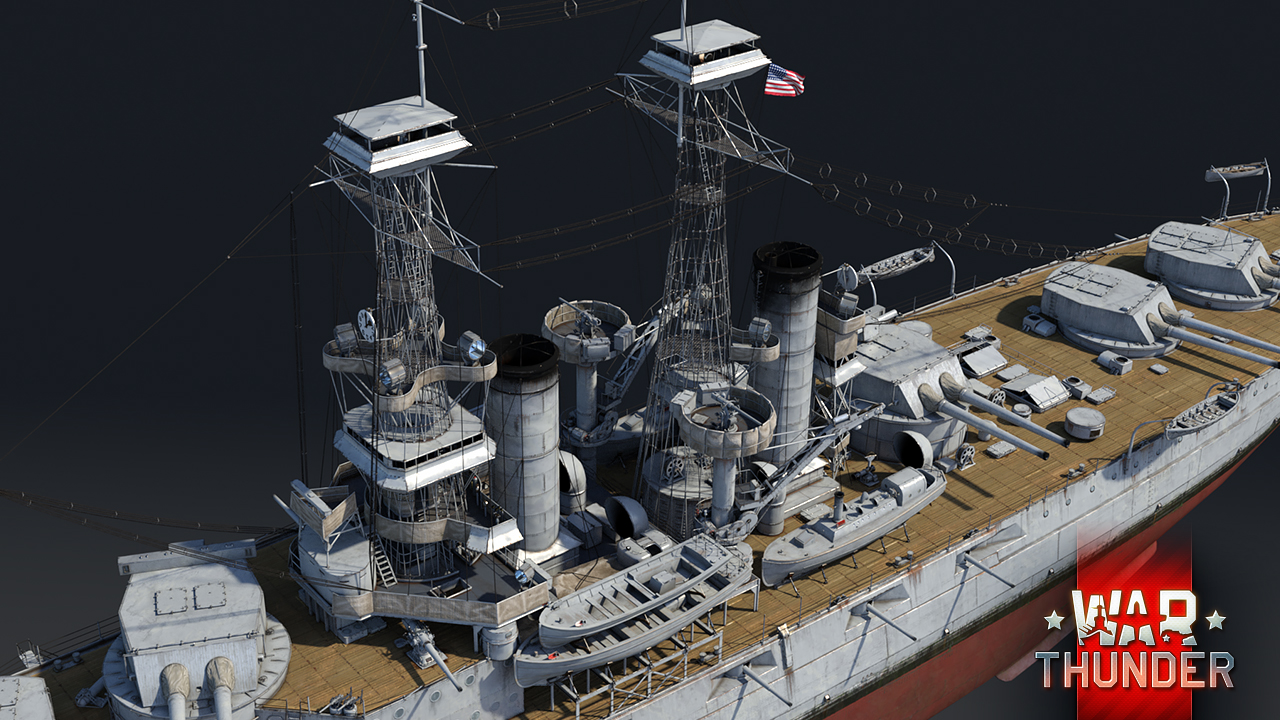 In War Thunder, USS North Dakota will be the first battleship to join the ranks of the American naval research tree and also among the first vessels of this type to make its way into the game. Embodying all aspects for which these highly anticipated ironclads are known for, USS North Dakota will surely send some mighty shockwaves upon appearing in War Thunder naval battles in the very near future!

One of more characteristic features which define a battleship is, of course, its large-calibre primary battery, and boy, does USS North Dakota manage to impress in this regard! Possessing a primary arsenal consisting of a total of 10 x 12’’ (305 mm) cannons, split into five twin turrets, USS North Dakota promises to pack one of the heaviest broadsides among the first wave of battleships arriving with the upcoming update.

In addition to all the large-calibre artillery, USS North Dakota also comes fitted with fourteen 5’’ (127 mm) secondary battery cannons, mounted in casemates on either side of the ship’s hull. Furthermore, two 3’’ (76 mm) cannons make up the warship’s AA arsenal, while USS North Dakota also has a small trick up its sleeve in the shape of a pair of fixed underwater torpedo launchers on the ship’s bow. However, due to a lack of short range automatic weapons, USS North Dakota is a more than inviting target for pilots, looking to bag a juicy score!

During regular gun engagements with other warships however, USS North Dakota promises good survivability, mainly thanks to its thick armor protection as well as large complement. Specifically, the 1,384 crewmembers operate a warship whose vital components are protected by a 279 mm strong belt. Furthermore, the conning tower and turrets are encased in 292 and up to 305 mm of armor plating, respectively.

On the flip side of the coin, possessing great firepower and protection usually comes to the detriment of mobility and USS North Dakota is no exception in this regard. Despite being powered by a steam turbine, generating 33,875 horsepower, USS North Dakota can only reach a rather pedestrian 21.8 kts (40.4 km/h) top speed. As a result, captains are best advised to stay clear of confined fighting areas and instead focus on providing deadly long-range fire support for their allies from more open waters.

USS North Dakota arrives in War Thunder with the release of the “New Power” major update and will become available to all captains as one of the first battleships in the US naval tree. In the meantime, keep a close watch on the news horizon as we continue unveiling what the “New Power” major update has in store for you. Until then, calm seas and happy hunting captains!

Commenting is no longer available for this news
Rules
Nikiwo
32

Is it just me or do you also get really dissapointed when theres a devblog about a ship?

Cool ship, now when are you going to fix Strv 103 aiming system? Still broken and inaccurate, tanks have been out for a year, and you are still selling a premium tank THAT IS BROKEN. FIX IT PLEASE THEY'RE SO STRESSFUL TO PLAY

HSTV L is bugged since release aswell. It doesnt even get its 4 reverse speed gears.

Nobal, Didn't spookston make like 3 or 4 videos about the HSTVL and said he sent his data to gajin, they should have enough documents afaik.

I would like to personally thank the developers for choosing the USS North Dakota. As I live in North Dakota, this is huge for me. ND almost never gets recognized for anything. This is huge for all WT players that reside in ND. Thank you so much and I will see everyone sailing the waves.

It's a good feeling, isn't it? The British county I live in hasn't had a ship named for it, but even visiting where the ship was launched gives you a great connection to it. It must be even more lovely to see your home's name on a ship like that.

Whenever we get to WW2 BBs, I sincerely hope that Gaijin picks the USS West Virginia as a ship to be added. The West Virginia was one of the ships sunk during the attack on Pearl Harbor. However, by mid 1944, she had been raised and repaired and was ready to get revenge. She was present at the Battle of Surigao Strait, which marked the last battle between battleships. She also provided extensive fire support during Iwo Jima, where she was hit by a Kamikaze, which caused little damage.

ElloGov, ElloGov I'm pretty lucky because my BB the North Carolina is like almost confirmed just because of the fame of it. Unless they add the Washington which that'll make me angree

Is it just me, or is there a sever lack of Barbershop striped ships in this update?

Dozer15, Not just you bro

no now more people will play naval because they get to grind big ships with ease. Its much better and more fun

chewbaccy, True, but people with premium boats will get fucked over because of it, since you can't use them to grind ships anymore, I was excited to grind germany with the Lubeck, but I guess that's it for that then.

I know what you mean, out of the water it's kind of endearingly chunky. I think it looks a lot more impressive in the water though.

I would like to bring to attention an issue that has tormented me for years and now more than ever. The first battleships we are looking at are 6.0 and my question is, if the first are at 6.0 battleships like Bismarck or Yamato what will 10.7 be? so I have to expect Mig 21 and F-4 against WWII ships ... not to mention that the Maus at 7.7 plays with wagons from the 70s ... I ask and I'm not the only one to put the means for historical periods even if these are too strong.

Boi It ain't that hard to shoot down a Mach 1 aircraft with a DDAA or a CLAA so a late war ship with two CLAA's of AA stuck to each side ain't gonna be a problem.

Being used to play Isuzu and Chikugo, so 40km/h is not that bad.

mayebe but frihates usually don't need to travel a lot, we'll have to see

Now you have to answer! Alaska or no? :)

Oh also a more relevant question, does the North Dakota come with more ammunition types than were present on the first dev server? It only had Armour Piercing there.

Alaska in this patch? NO!

CHaooSS, It was in one of the videos so here's to hopeing.