Imperatritsa Mariya: the Empress of the Black Sea
12 November 2020 Development

Imperatritsa Mariya was one of the first dreadnought battleships that entered service with the Russian Empire before the outbreak of the First World War. Meet the top ship in the Russian Navy line in the War Thunder "New Power" update!

The first battleships of the "dreadnought" type in the Russian Empire entered service with the Baltic Fleet, they were battleships of the Sevastopol type, laid down back in 1909. The proximity of a world war and information about the serious strengthening of the Turkish fleet forced the Tsarist government to start building three battleships similar to the ones in the Baltic for the Black Sea Fleet. The general architecture, key technical units, three-gun turrets were borrowed from the battleships "Sevastopol". Three battleships for the Black Sea Fleet were laid down in 1911, all new ships were named after the Russian monarchs. Tests of the battleship Imperatritsa Mariya (Russian for “Empress Mariya”) ended in 1915, the ship was immediately put into service and began to perform combat missions.

With the advent of Russian dreadnoughts, the situation on the Black Sea changed dramatically in favor of the Russian Empire. Imperatritsa Mariya provided support to the 2nd brigade of battleships near the Turkish coastline in the fall of 1915, at the end of winter it took part in the Trebizond landing operation, and in the summer of 1916 became the flagship of the Russian Black Sea Fleet.On October 20th, a powder storage detonated and a fire occurred on the ship, the subsequent series of explosions caused the destruction of the battleship. More than 200 sailors perished, the ship sank near Sevastopol. With great effort in 1918 the ship was lifted and transferred to dry dock, but restoration work was never completed due to the social and political crisis in post-war Russia. In 1927, the battleship Imperatritsa Mariya was dismantled for its metal. 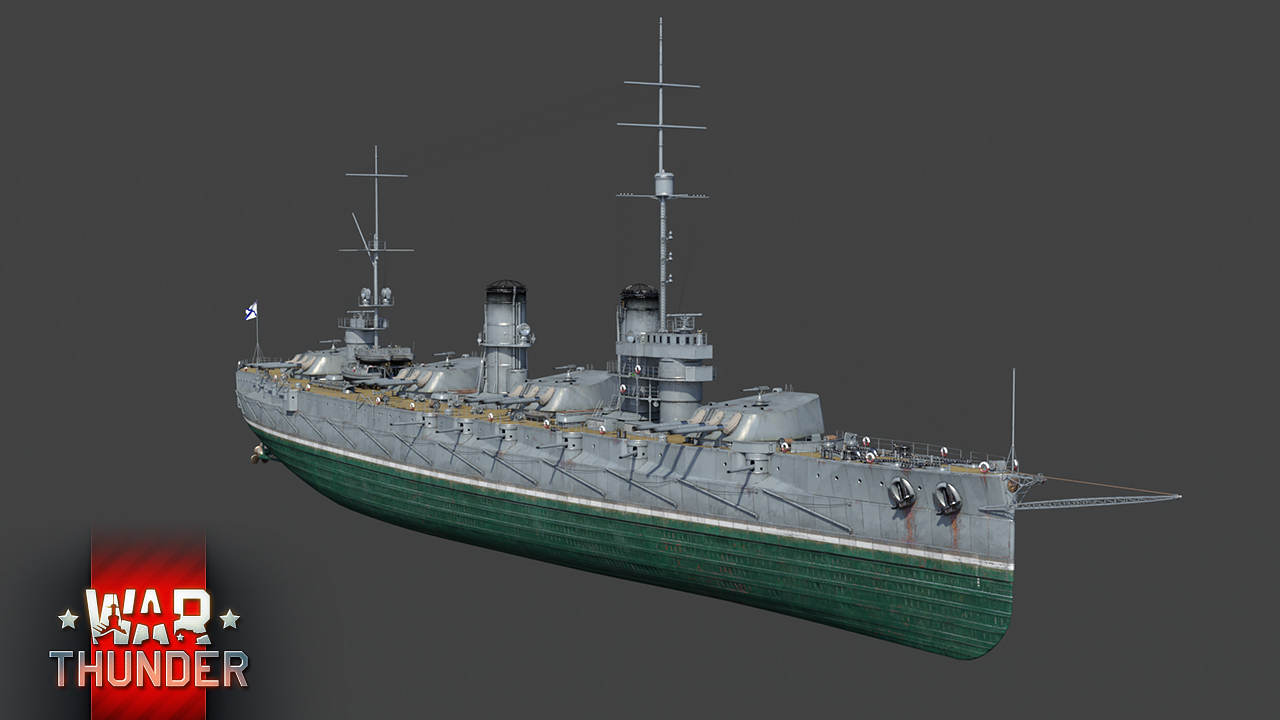 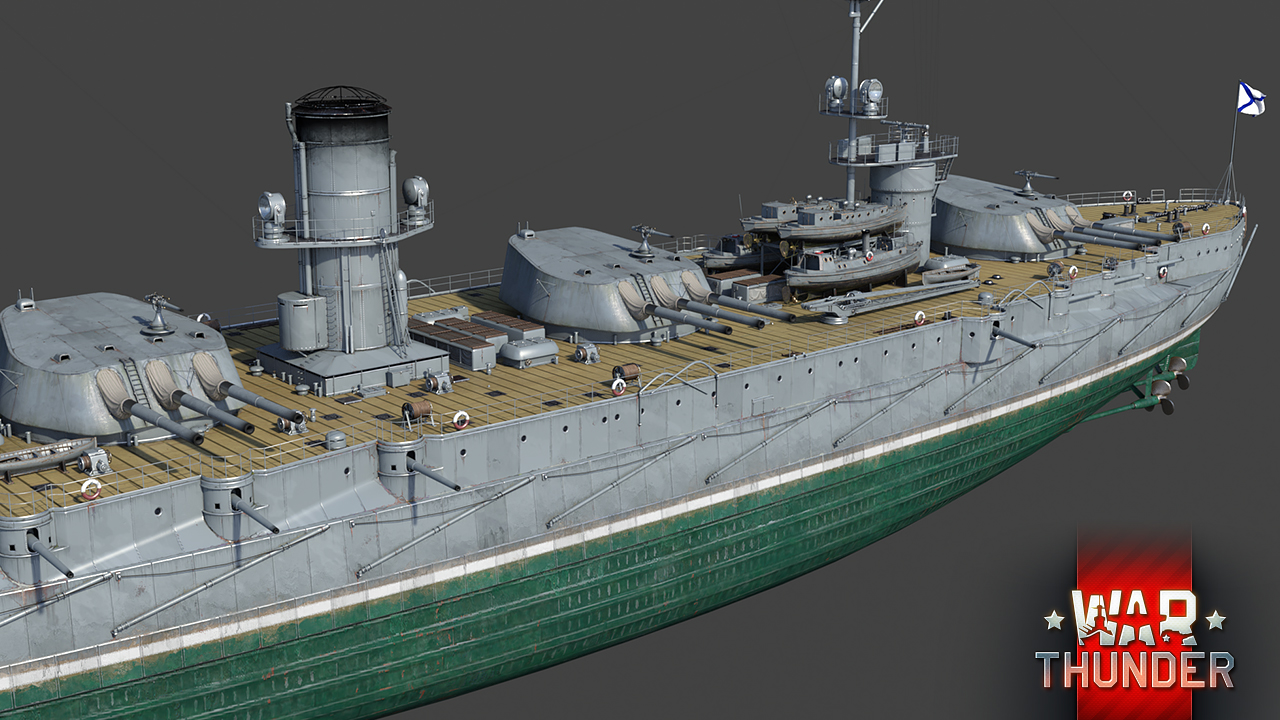 The battleship Imperatritsa Mariya will appear in our game with the release of the New Power update at rank V of the USSR Navy research tree. In terms of the approach to the composition of artillery and armor, the battleship is a classic dreadnought, but the layout with a flat deck, four three-gun turrets on a longitudinal axis and an almost complete absence of superstructures significantly distinguish the Mariya from her peers.

The main caliber on the ship is four three-gun turrets with 305mm cannons, all the turrets can fire simultaneously at one target from the left or right side. In addition to a massive one-second salvo, the Russian battleship is distinguished by the truly devastating semi-armor-piercing shells for the main caliber with a mass of 471 kg and an explosive mass over 55 kg!  Imperatritsa Mariya has an impressive secondary caliber - 20 130mm cannons, 10 on each side. The main armament of the battleship is supplemented by four single-tube torpedo tubes with a supply of torpedoes. But the anti-aircraft armament of the  Imperatritsa Mariya leaves much to be desired - you will have only four 75mm unitary loading cannons, one on the roof of each gun turret. Of course, such a battery is not capable of effectively fighting enemy aircraft.

The Russian battleship has good survivability thanks to the armor belt of differentiated thickness (up to 262.5 mm), good protection of barbets, turrets and vital compartments. In addition, a large crew (1,300 officers and lower ranks) also contribute to the ability to survive for an extended time under intense enemy fire.

The best tactic for using the  Imperatritsa Mariya dreadnought, like other first battleships in the game, will be to destroy the most protected targets - battleships and cruisers from a lengthy distance. Heavy main battery guns have a long reload time, so firing accuracy will be especially important here. The greatest danger to the Mariya is aviation, so if your team has a battleship, do not forget to cover it with anti-aircraft fire.

Meet the Imperatritsa Mariya in the upcoming War Thunder update “New Power” along with battleships from other gaming nations - the big ships are coming!

Commenting is no longer available for this news
Rules
Dozer15
40

The Imperial Russian fleet was influenced heavily by the Italian navy well beyond ww1 and into ww2. Funny that we get a Battleship that is a near copy of an Italian design, but we do not get the Original version for Italy. Beautiful model, but c'mon guys.

Italy was last country without supersonic jet, now they are the only ones without dreadnought. Thanks gaijin

saddest part is that the community forgot about the stock HEAT changes and moved on... which is exacly what the snail wanted.

I'm okay with stock HEAT-FS, and reduced shell costs was a nice addition. I still think basic NVD should be made free, though.

Skelezig, I don't think it should be free, but researchable as tier 1-2 module, and if the tank has IRV( or just IR), then it should be as a upgradable from NVD to tier 3-4 module list. No upgrade in the game is free, same with repair kit and extinguisher, so unless that is changed, we have to work with what we got.

Many "moved on" by simply not playing tanks anymore or even the entire game.. It's clear since years ago that Gaijin just doesn't care about the players having fun, just "give us all your money or suffer".

"Weak AA artillery" Like every other dreadnught When you have by far the best Dreadnaught and you have to put some kind of a con...

All of these ships are just going to get bombed/torpedoed to death. Fun and engaging gameplay.

That is why they should have escort ships. A DD or frigate with good AA should be able to assist in this area. I hope you all have friends/squadron to sail with. o7

Old_lronsides, Where's the "historical accuracy" then? Gaijin removes vehicles because they're "paper designs", but will allow divebombers and torpedobombers in the same battles against PRE-WWI dreadnoughts? Well....have fun with that....

Can we focus on other minor countries, like China, that have almost exclusively copy and paste, instead of the major countries?

exact reason they shouldn't be in the game, if all they are going to have is copy paste

Popeofteachurch, I actually like the copy-paste vehicles. Want to play USSR, USA and Japan? Why not play them all? And besides, I have reached BR 5.3, My highest in any nation!

oh look an ugly Dante Alighieri, can't wait to see the real beast in game..... ah no we ain't gonna see it yet.

Dante Alighieri is life I need it

Nope, it's the other way round: Dante Alighieri is Gangut with a touch of Italian design :)

Id be all for the traction nerf being removed, if they would kill the player the instant he traveled out of bounds.

Dozer15, screw that, just work on the maps to give mobile tanks the chance to get in these spots. I don't mind there being good spots of the way to getting there is risky. I even don't mind extreme flanks, as long as there is no broken spot shooting into spawn

so lets sum up : 4th dovbleg for Russia while France Gets a tractor and Italy a tier 2 premium.. fair and balanced... at least give us the Leclerc S2 devblog

LoL you are whining about devblog? When I wa reading I was hoping to read that you will write that they should add S2 into the game, but DEVBLOG?!?! Dude...isn't it enough to know that there will be S2 in the game? devblog is not always necessary. I feel like update wont be this week, but next week, so there is still time for S2 devblog, which honestly is not needed like bunch of these others.

smaddeus, Dont you see Devblog aint the pb or are you just blind, the problem is how much Gaijin always favor russian, and its getting worst since 1-2 years... How much time did the french wait for "just" another top tier MBT? while its probably the nation outside the big 3 that has the biggest potential at top tier....

I'd hate to be the AA gunners standing on top of those turrets when the big guns open up :P

Why? The shockwave travels forwards not backwards. Don't you people know ANYTHING?

xCrimson_Thunder, you'd be safe from the shockwave.... blown out eardrums however

when those main guns fire they clear the decks, im pretty sure those aa guys would bail and go back into the ship

is that Update next year :3?

Stona_WT, Stona, you gotta spill the beans man!!! I'm dyin every morning and every 2 hours looking at the launcher for news

On the SoonTM scale, how soon is the update coming?

AeiBigiu, Mmmm I don't believe you. I think it's next week.