The F-104 Starfighter is a well-known American supersonic jet fighter, developed at the start of the Cold War by the Lockheed company. Soon, pilots in War Thunder will have the chance to fly this truly iconic and unique aircraft as it arrives at the top rank of several nations with the release of the incoming major update!

The development history of the F-104 Starfighter begins in 1951, when Lockheed’s lead engineer visited US pilots in Korea. The feedback given to Johnson was clear - US planes were too large and complex and would often find themselves inferior to the much smaller and simpler Soviet MiG-15. On his return to the United States, Johnson assembled a team of engineers and started developing an aircraft that would address the concerns of the pilots.

The result of this undertaking was the F-104 Starfighter, whose first prototype, designated XF-104, first took to the skies on the 4th March 1954. Although both prototypes were lost during testing, the results delivered by the prototypes were promising enough for the USAF to accept the aircraft into service in November 1955.

Soon after entering production, the F-104 quickly also became a highly popular aircraft on the export market. West Germany was, alongside the United States, the primary operator of the Starfighter, owning over 900 F-104s in its air force  at the peak of its service career. However, 13 other nations also employed the F-104 such as Canada, Italy, Japan, Spain, and many more.

The F-104 saw most of its combat service with the USAF, most notably taking part in the Vietnam War. Furthermore, the F-104 also saw combat during the Indo-Pakistani Wars in the mid ‘60’s - early ‘70’s while flying under Pakistani colors.

In the end, over 2,500 Starfighters would be built, with most being gradually decommissioned by the end of the Cold War. Italy was the last to decommission its F-104s in the early 2000s. 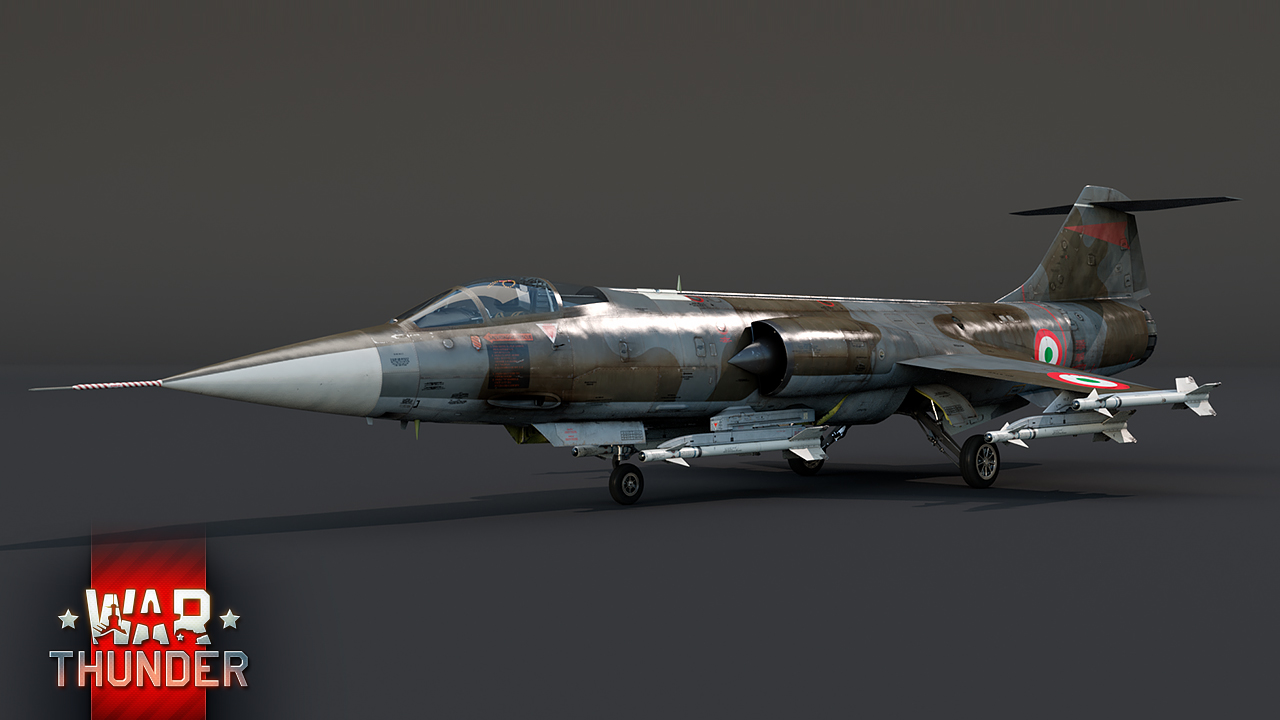 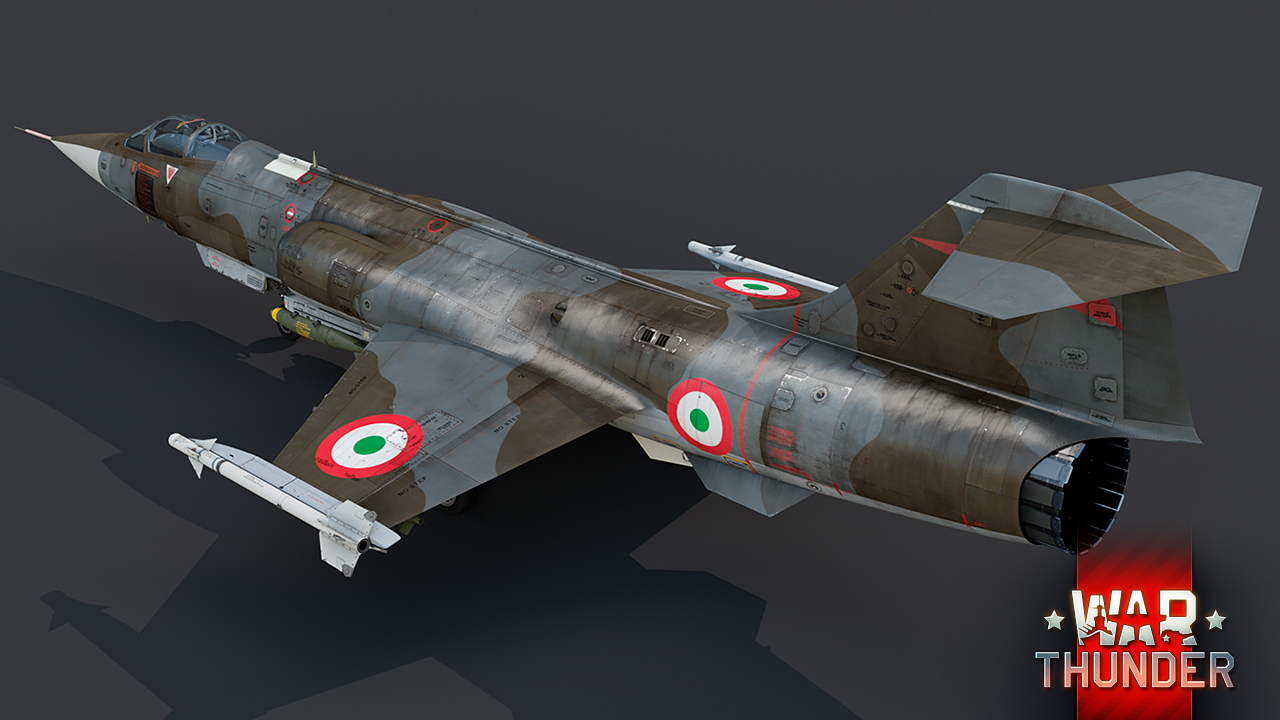 In War Thunder, the legendary F-104 Starfighter is coming to the game with the next major update as a new top ranking jet fighter to the aviation trees of several nations and in a number of different variants at the same time. This means that not only American and German pilots can look forward to flying the Starfighter, but also fans of Italian, Japanese and Chinese aviation. So strap yourselves in pilots, we have a lot to cover in today’s devblog!

Fans of American aviation can look forward to getting access to two versions of the Starfighter - namely, the F-104A and F-104C. The F-104A is the first production version of the Starfighter, fitted with a J79-GE-3 afterburning turbojet engine, allowing it to reach a top speed of 1,450 mph (2,333 km/h) at altitude. The ‘A’ model of the F-104 features a single 20mm M61 Vulcan cannon as its primary armament while also being able to carry a pair of Sidewinder missiles. The F-104C awaits more ground attack oriented pilots, having much in common with the ‘A’ model, but expanding upon its secondary weapons arsenal substantially.

German pilots on the other hand, will receive access to a later model of the Starfighter - the F-104G. As the most versatile variant of the F-104, the ‘G’ model gives pilots access to a greater range and quantity of secondary weapons, thanks to the increased number of pylons. Furthermore, the F-104G also features minor improvements to overall handling and possesses a slightly more powerful version of the J79 engine.

Fun Fact: The leading edge of the Starfighter’s wing is so thin, that it actually presented a cutting hazard for ground personnel conducting regular maintenance on the aircraft.

Pilots from the land of the rising sun won’t be left out of the fun either as Japanese pilots too will get access to their own domestic version of the Starfighter - namely, the F-104J. Being a variant derived from the F-104G, the ‘J’ model unsurprisingly features a great deal of similarity to the ‘G’ model with the exception that Japanese aviators won’t have access to such an extensive array of secondary ordnance. As a result, their F-104 is more centered around combating hostile air threats with its cannon and missile armament, while strike missions can only be effectively carried out against lighter targets with the use of unguided rockets. Another Asian operator of the F-104 will become China: their pilots will put their hands on controls of versions F-104A and F-104G.

Lastly, Italian pilots will also finally be able to breach the sound barrier - not once, but twice, thanks to the introduction of the F-104S to the top rank of the Italian aviation tree! Being one of the last variants of the Starfighter to be developed, the F-104S features a more powerful J79-GE-19 engine, which not only improves flight performance overall, but also allows the aircraft to carry even more ordnance than any of its predecessors. The resulting inclusion of two further underwing pylons will give the F-104S even greater versatility in combined battles, while pilots in air battles will be able to reap the benefits of improved performance in order to gain the upper hand in an intense aerial engagement.

Meet the F-104 Starfighter in the upcoming War Thunder "Starfighters" major update and be the first to experience what it’s like being virtually strapped to a rocket! In the meantime, make sure to stay tuned to the news as we share more information on the next major update, coming to the game very soon. Until then, clear skies pilots!

Commenting is no longer available for this news
Rules
wardude3000
0

Does anybody know if the American starfighter (F-104) is getting any better missiles than AIM-9B's? I feel like that might just be a dev server thing, but idk...

Italian one has the sexiest camo

Obviously no thought put to simulator battles when releasing these new planes. Cant wait for the teamkilling that's about happen.