In short:  almost the best U.S. Navy attacker aircraft in the game - 4x20mm guns, plus bombs and 114 rockets. Up to 1000 KPH speed at ground level. Good as fighter, brilliant as an attacker in combined battles!

The FJ-4 was the fourth modification of the Fury - the naval version of the F-86 Sabre, serving primarily with the USMC. Being initially conceived as an all-weather interceptor, the FJ-4 Fury had to incorporate several design changes compared to the previous fighter version in order to fulfill this new role. The most notable change was the increase in range and the installation of new, thinner wing with an increased surface area. To achieve the range increase, the aircraft underwent several structural changes which reduced its weight and allowed for additional fuel tanks to be installed. Additionally, a more powerful Wright J65-W-16A engine, producing 7,700 lbf of thrust, was installed on the production versions. Following successful test flights, production of the FJ-4 commenced in 1955 with first units entering service with the Navy in 1956. Over 150 FJ-4 Fury interceptors were built.

Wishing to increase the strike capabilities of the new FJ-4, engineers of the North American company went back to the drawing board and once more applied several changes to the design, creating the FJ-4B. The FJ-4B version most notably featured a strengthened wing, offering an increased payload by adding two additional hardpoints to each wing, bringing the total up from two to six. Furthermore, the aircraft received air brakes under the aft of the fuselage, making dive bombing and landing easier. Of the original order for 221 FJ-4 Fury interceptors, the last 71 were modified into the FJ-4B fighter-bomber version. An additional order for 151 FJ-4B Furies followed in April 1956, bring the total of produced FJ-4Bs up to 222. Both the interceptor and fighter-bomber version of the FJ-4 served with the Navy and USMC until the early 1960s, before being phased out of active service and moved to the Naval Air Reserve. The FJ-4 was the last modification of the Fury and among the last mass-produced variants of the Sabre lineage. 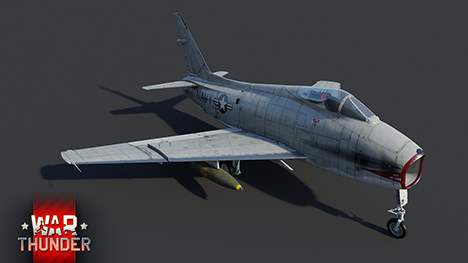 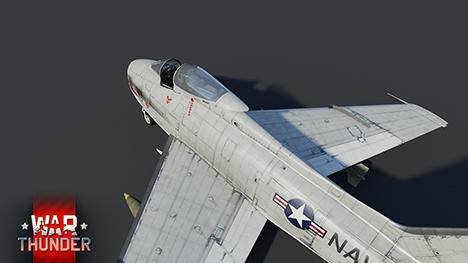 The FJ-4B will become available to all fans of jet aviation with War Thunder’s upcoming update 1.79 as a new addition to the top rank of the American aviation research tree. At first glance, when compared to the numerous modifications of the F-86 Sabre already in War Thunder, the FJ-4B doesn’t appear to be much different than its older brethren. The FJ-4B  may be armed with a great variety of bombs - 5x250lbs, 5x500 lbs, 2x1000 lbs, and 114 Hydran-70 unguided rockets. It also has 4 20mm cannons as offensive weaponry which are good both against aircraft and lightly armoured ground vehicles.Unlike other Sabers however, FJ-4B is equipped with one of the most powerful jet engines ever installed on any given Sabre modification - the Wright J65-W-16A. Producing 7,700 lbf (~3492 kgf, 34 kN), the J65 engine is capable of pushing the FJ-4B up to speeds of 680 mph (1095 km/h) at sea level. Although some later variants of the F-86 can frequently surpass the top speed of the FJ-4B, the additional thrust from the engine wasn’t meant to boost its top speed, but rather compensate for the additional weight of the secondary armaments with which the aircraft would often be outfitted with.

Speaking of secondary armaments, being a fighter-bomber, the FJ-4B can carry a vast and varied amount of ordnance options, ranging from bombs to unguided rockets. Depending on the loadout, the FJ-4B can be equipped with bomb calibers ranging from 250 lbs to 2000 lbs, or if you’re the type that likes rockets more, even up to four rocket pods with 19 projectiles each. Additionally, four 20mm nose-mounted cannons can be used to engage hostile aerial threats or lightly armored ground targets. 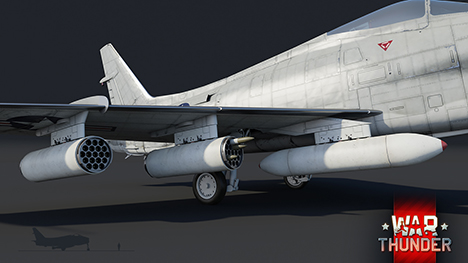 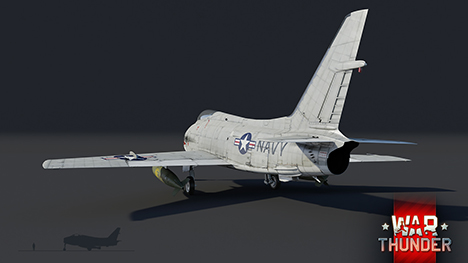 Although the Fury can hold its own when used as a fighter aircraft, the machine will truly shine when used in its designated role of ground attack in top tier combined battles, for example. Offering impressive ordnance options, combined with high top speeds and superb agility, the FJ-4B is bound to become a new fan-favorite close air support machine of the top ranks.

Tired of your Skyraider getting blown to bits by top tier SPAA in combined battles? Then be sure to check out the new FJ-4B Fury coming with the next major update to War Thunder and see how those pesky SPAA players like getting their good news delivered to them at 500 mph. Until then, happy hunting pilots!

Commenting is no longer available for this news
Rules
BRAAAP_STUTUTUU
10

Already saw and flew this in the devserver, it's pretty nifty! soooo, could we expect the A4A skyhawk to come in the future? Not in update 1.7.9 of course :p

or we can give other not so developed countries a bit of love, like italy and france.

YES! This. Sooooo much this. The A-4 is probably the vehicle I am most waiting to see show up in the game.

good plane. but is the A-10 thunderbolt coming to the game someday?

The A-10 post-dates this entire games era, coming out (as it does) long after the F7, F8, and F5 Vigilante. So, NO! People really need to check a copy of Jane's Aircraft or something before asking for planes they encountered in Ace Combat or other drivel.

JustWill, Gaijin has specified multiple times that this game is not set in any specific era. So something as new-ish as an A-10 is a possibility. A better argument might be the fact that Gaijin is hesitant to put self-guided missiles in to the game because they feel that it would make the game less fun.

Those Hydra HEAT rockets are gonna just tickle tanks, unless you want to become meal for radar guided SPAAG at top tier combined battle by making multiple pass to kill ONE tank xD the HE rockets are still better!

_____O_____, lel heat rocket hull break spaag , just fly away from the battle , let them forget you are here , fly low and attack from their back and heat rocket pen every flank/roof

i have small request, i play tanks and i want to ask enable or fix map rotation, i dont want anymore play same 3 maps everyday .Its heppening too long. thank you.

When is Britain getting the Challenger 1 Mk.3?

Currently we don't have this planned.

Smin1080p, But when is the Challenger I going to be corrected to show it being the Mk. 2? And more importantly, when are we getting the Mk. 1?

probably not this update, there was no new british MBT on the devserver

i am so happy that you have finally added the Mk81, 82, 83 and 84 models for bombs, now to have aircraft with modern-ish Dumb ordinance. will these also be present on the AD-2 and 4 series?

I don't play US vehicles much at all, but I do admit those bombs look way cooler than other US versions in game, as well as more aerodynamic.

Apparently This plane can go supersonic?

in a dive maybe