In short: The first aircraft produced in Romania in War Thunder. A premium of the 2nd rank, ease of controllability, armed with two 20mm German MG 151/20 cannons with a large amount of ammunition, and machine guns.

The I.A.R. 81-C is the final wartime modification of one of the most well known domestically produced Romanian WW2 military aircraft. This aircraft model has been created by one of our players, Vitaliy Vostokov a.k.a. NovA29R and thanks to the War Thunder revenue share program, the I.A.R. 81-C will once more take to the skies as a new user-made vehicle, coming to the game with the upcoming update 1.79!

After fulfilling several government and licence contracts, the relatively young I.A.R. (Industria Aeronautică Română) company had enough resources and technical know-how to begin developing their own fighter aircraft. Taking inspiration from previous licenced projects, I.A.R. engineers initiated a private venture by beginning working on their own fighter aircraft in late 1937, which would later be known as the I.A.R. 80. As work was progressing slowly, the first prototype wasn’t completed until spring 1939. Initial testing produced positive results, proving that the I.A.R. 80 could be considered a modern fighter despite not matching the performance of contemporary Bf 109s and Spitfires. After addressing some minor issues and upgrading the prototype’s engine, the I.A.R. 80 was tested in a head-to-head competition with the German He 112. Impressed by the aircraft’s display, the Romanian government placed an order for 100 I.A.R. 80s to be produced, while only a limited number of He 112s were ordered for production. Despite starting production almost instantly after the order was placed, I.A.R. struggled to ramp up production as shortages on the Belgian-made FN Browning 7.92mm machine guns became an increasing issue in the wake of the German invasion of the Benelux states. By April 1941 however with Romania joining the Axis, the armament shortages were temporarily addressed. Taking advantage of the opportunity, I.A.R. upgraded their fighter to the I.A.R. 80-A, increasing the number of machine guns to the initially proposed six and installing a more powerful engine, thus solving many initial concerns with the aircraft.

Even prior to Romania’s entry into WW2 in 1941, the government was keen on modernizing their stock of strike aircraft and dive bombers. The latter role was to be filled with the Ju 87 Stuka. However, as Germany initially refused to permit a licence production, I.A.R. came up with the proposal to convert some I.A.R. 80 fighters into dive bombers, creating the I.A.R. 81. These machines differed only from fighter models in the installation of a bomb rack underneath the fuselage, capable of suspending a 225 kg bomb. The I.A.R. 81-C was the final modification of this series, featuring upgraded MG 151/20 20mm cannons compared to previous versions. Around 150 examples of this modification were produced out of the approximate total of around 350 I.A.R. 80/81. By the end of the war, most of the I.A.R. 81s were not used in the dive bomber role and were instead used side by side with the I.A.R. 80 as fighters, most notably taking part in the famous defense of Ploesti against U.S. bombing raids in 1944. I.A.R. 80s continued their service with the Romanian air force after the end of WW2 and even into the early 1950s, before being replaced by more advanced Soviet counterparts. 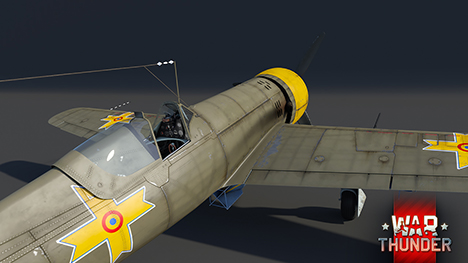 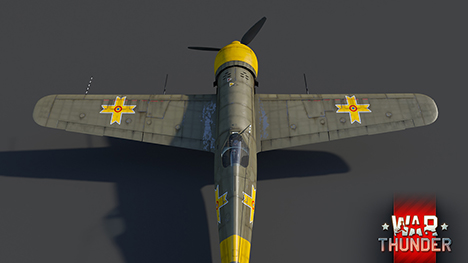 In War Thunder, the I.A.R. 81-C will be making its way to the game as the first rank II premium aircraft available for the Italian aviation tree. As such, players can expect a fairly quick and nimble fighter, equipped with more than adequate firepower, capable of dealing with most threats with relative ease. The first striking feature of the I.A.R.  81-C that pilots may notice is its stretched fuselage, housing an unusually rearward positioned cockpit. Although this unusual placement meant that pilots experienced some difficulties when taking off and landing the I.A.R. 81-C, the bubble-shaped cockpit canopy allowed for great rearward visibility, which will surely be appreciated by fans of the simulator modes in War Thunder as well.

The reason why designers chose to stretch out the aircraft though, was to preserve the ideal center of gravity on the heavier production aircraft, in order to maintain the excellent controllability of machine, praised by many pilots. In addition to excellent agility, the I.A.R. 81-C doesn’t disappoint when it comes to speed either. Powered by a 1,025 horsepower licence built version of the Gnome-Rhône Mistral Major engine, the I.A.R. 81-C is able to reach a speed of 485 km/h at an altitude of 5,000 meters. Despite certain machines, such as earlier versions of the Spitfire and the Bf-109, exceeding the performance of the I.A.R. 81-C, the aircraft will still be able to hold its own in a dogfight and makes up for some of the lacking performance with its firepower. 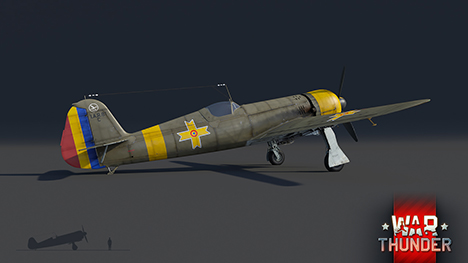 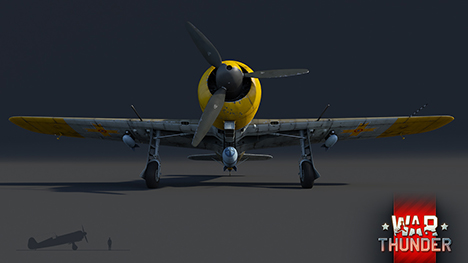 By the way, for update 1.79 we decided to locate the new aircraft of Axis nations that are not represented as a main game nation in War Thunder in the research line up of Italy.

Armed primarily with two 20mm cannons in each wing, the I.A.R. 81-C offers a very respectable level of firepower at a rank where most nations’ aircraft only start to transition from rifle caliber armaments to cannons. That being said, the type of the mounted cannons shouldn’t be underestimated either. Most cannons found at the I.A.R. 81-Cs rank are early autocannons that often feature a slow rate of fire and low accuracy. Armed with German MG 151/20 cannons, the same cannot be said for the I.A.R. 81-C. These cannons have already gained an infamous reputation with War Thunder pilots who know what kind of destruction these cannons can inflict on mid to high tier machines, not to mention on some aircraft of the early ranks.  Additionally, the I.A.R. 81-C can mount a single 225 kg bomb underneath the fuselage in order to engage armored ground targets such as tanks and fortifications. However, suspended ordnance creates extra drag and additionally weighs the aircraft down, decreasing its performance as a result. This is always worth keeping in mind when flying a machine that can act as both a fighter and a bomber. Getting caught at the wrong time in the wrong place with the ordnance still attached to the aircraft can sometimes be the final nail in the coffin for some pilots.

The I.A.R. 81-C will become available for purchase to all War Thunder pilots in the upcoming update 1.79. Stay tuned to the news for the latest developments on the next major update for War Thunder. Until then, pilots!

Commenting is no longer available for this news
Rules
CaID
54

why not make it a first step to add the Romanian into a different tree in alliance with other minor axis nation?

Ouiche, and then we have weverything twice again, like the french or italian planes, gaijin could start thinking about the future of the game and the trees a bit better

CaID, You could put in Swedish aircraft in this for premiums and such since they had close relations to Finland and Germany! Saab B18, B17 and J21 aswell as FFVS J22 would be really appreciated by Swedish fans.

Congrats to NovA29R for his hard work making it into the game!

Germany already have a lot of vehicles already, while Italy struggle a bit on that regard. And yes, we noticed the German vehicle fans to be quite vocal :)

Ouiche, If there was some more focus on fleshing out the Italian tree rather than focusing on high tier vehicles I have no doubt this would be a non-issue, as it is the decision making has been clearly profit oriented rather than making any semblance of sense for game health.

There has also been a large vocal part of the community wanting a "minor axis" tree. So it's eye of the beholder on this.

Conte_Baracca, I want a Romanian tree.

>massproduced >put in service >saw action on the battlefield => premium

Germany already has a huge amount of premium and bundle options at the position the I.A.R. 81 would occupy, not to mention, they already have a plethora of fighter-bomber options. This aircraft is better suited to Italy's needs right now and has no issues fitting in with the style of gameplay most Italian fighters offer. Besides, it will fight alongside its German comrades regardless.

Smin1080p, I cannot but agree with that.

Why the hell it is in Italian tree? pretty much every Romanian aircraft was in German tree. Romania was much closer to Germany than to Italy in WWII so i still don't understand your reasoning why you put it there. Maybe work on an actuall Italian made aircraft as a premium instead going the easy way

Because the Italian tree is thinner. Also... lots of people have been pushing for a "minor Axis" tree. Putting Romanian and Hungarian stuff in the Italian tree will help, particularly when it comes to tanks as the Turan II and Turan III are needed for the late war period.

Conte_Baracca, Or like i said gaijin could stop being lazy and actuall make an italian aircraft as a premium in iatlian tree

Germany already has a vast amount of premiums and fighter-bombers in that department, they really do not need another there and the I.A.R 81 helps boost the Italian lineup. Its more of a benefit there than Germany, plus it will fight alongside German teams regardless.

Wow, what a disappointment... I was waiting for the IAR 81C to become researchable for the Italians... And you ruined it! You should focus on ww2 vehicles before going crazy with modern tanks and planes! Since that was what War Thunder was made for, ww2 combat!

lyrillvempos1327, And no, i'm not like that, i mainly focus on asking for propeller planes that flew in ww2 instead of jets, cause i don't like jets.

EpicBlitzkrieg87, Well, i can see most people say it deserves to be in the German tree, i think so too now. But "Not only would its name look awkward in the tech tree's progression"??? What about the CR-42 in the German tree before the Italian tech tree was released? And the SM-79's? If they won't listen to anyone in any cases, should they instead focus on one think at a time. Like this: Modern tanks, Modern planes, ww2 tanks, ww2 planes, naval forces, gameplay performance and gamemode. instead of making a mess.

It's user made! It take a lot of time and talent to reach this level of quality.