Curtiss P-40F: The Mediterranean Angel of Death
18 May 2018 Development

The P-40F is a later modification of the well-known American Warhawk which strived to address some of the underlying performance issues of the earlier variants by featuring a more powerful engine. After a more than successful campaign in the Mediterranean theatre, the P-40F is now ready to once more compete for total aerial supremacy in War Thunder’s upcoming update 1.79!

In short: we have created completely new models for the P-40 fighters in our game and have also added a P-40F variant with a new powerful engine and a "toothy" camouflage!

Although early P-40s were equipped with one of the most powerful inline engines available to the American aircraft industry at the time, it quickly became apparent that even that wasn’t enough. Due to its advanced and robust design, it’s no secret that the P-40 was a relatively heavy aircraft for its type, resulting in power-to-weight issues which would never be fully solved. Nonetheless, Curtiss engineers continued tweaking and improving the design in all aspects, trying to lessen the drawbacks of a high weight and insufficient power.

In 1940, the American Packard Motor Car Company acquired a licence to manufacture the Rolls-Royce Merlin engine, in an effort to satisfy the growing demand of the British aviation industry. Additionally, the licence gave American engineers access to a more powerful engine at a time where similar U.S. engines were not available. Naturally, Curtiss engineers didn’t waste any time outfitting the P-40 with the brand new licence-built Merlin engine, resulting in the creation of the P-40F. Besides the internal engine upgrade, some external changes were also applied to the aircraft. For instance, the tail section of the fuselage was lengthened in an effort to counter the negative effects of strong engine torque on take-off and landing experienced on earlier modifications. With the changes applied, serial production of the new P-40F was scheduled to begin in 1942. As the British and Commonwealth air forces were particularly keen on a Merlin-engined P-40 variant, they were also the first ones to receive the new P-40Fs as early as summer of the same year.

Despite the British and Commonwealth forces receiving the P-40Fs first, the majority of the 1,300 manufactured machines served with units of the USAAF in the Mediterranean theatre. By the end of the Mediterranean campaign in late 1943, the P-40F had successfully proven the value of the applied changes by presenting itself as a more than capable air superiority fighter, when matched up against previously superior Axis counterparts such as the Bf 109F/G and M.C. 202/205. During its service in the Mediterranean, experienced pilots, applying the right tactics showed that the Warhawk could no longer be considered the underdog, but instead an equal at very least.

Interesting: The Soviet Union received P-40 fighters under the lend-lease program; they were considered to be aircraft with medium efficiency but were quite durable. Lieutenant Alexei Khlobystov in one battle conducted two successful rams and after that encounter, the pilot and his “Kittyhawk” returned to the airfield! 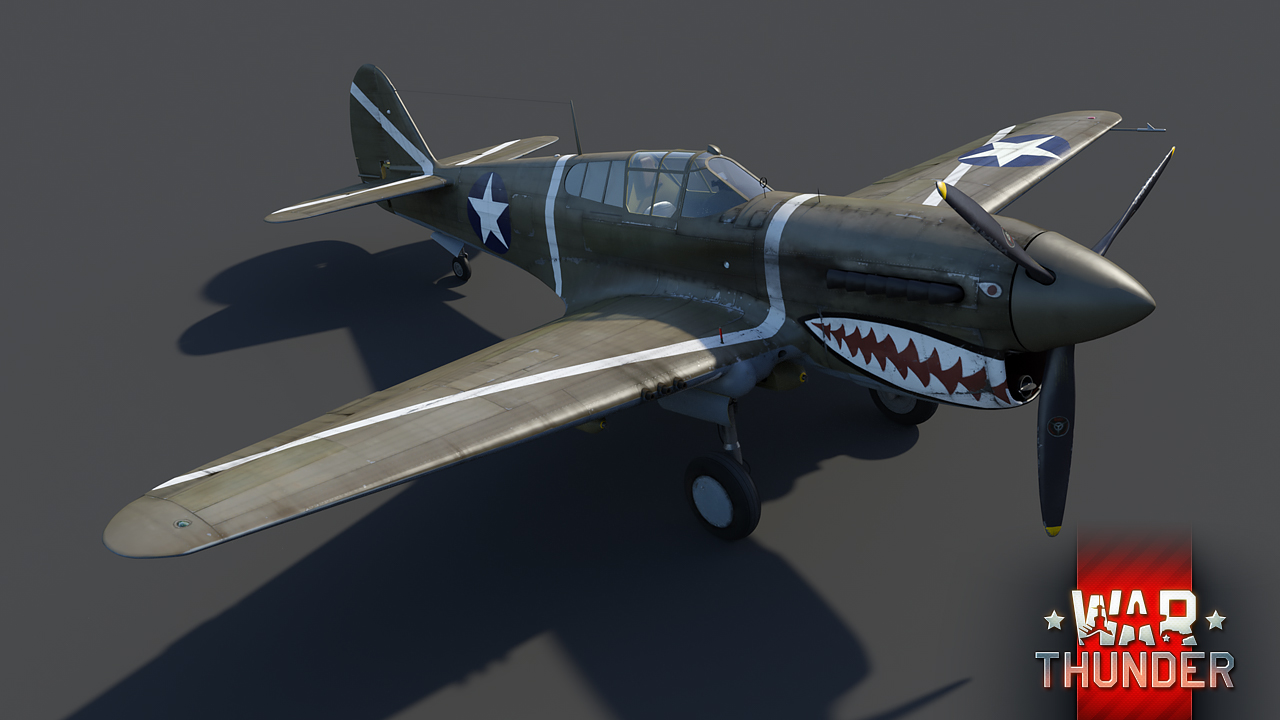 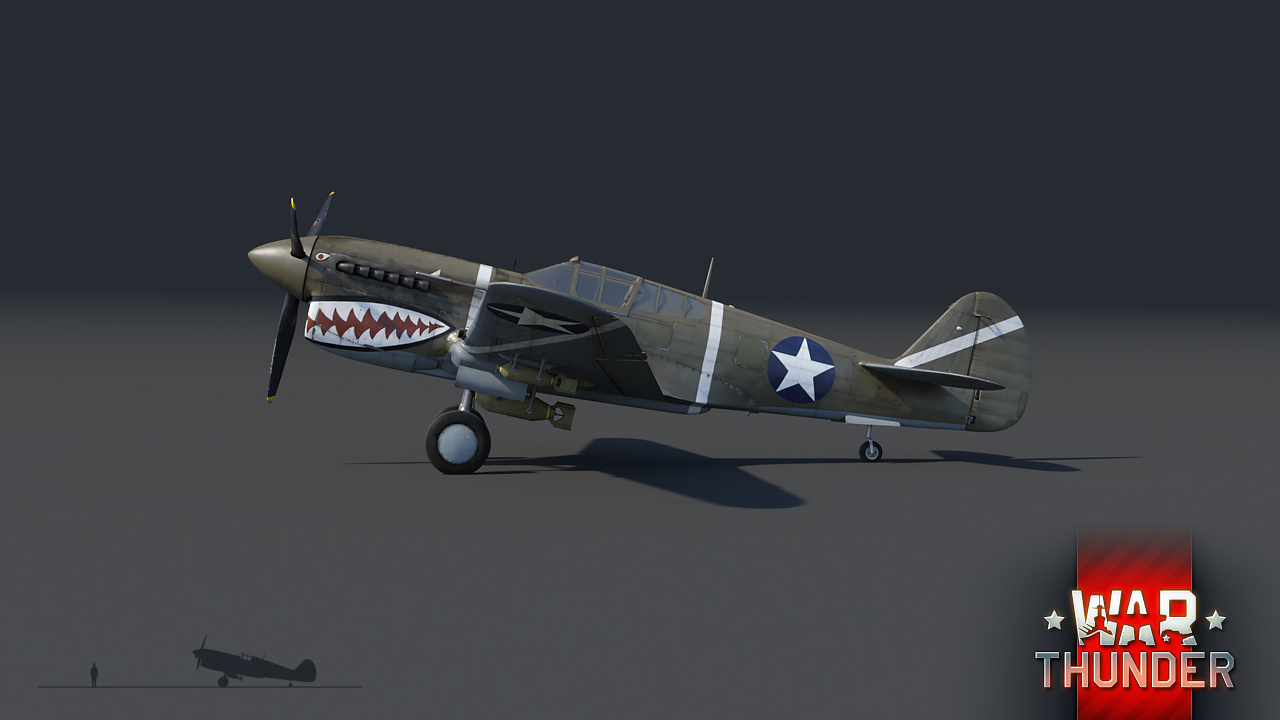 In War Thunder, the new P-40F will be a new addition to Rank II of the American aviation tree and will become available for research to all War Thunder players. When compared to the already present Kittyhawk in War Thunder, the P-40F doesn’t appear to differ much from its older brother at first glance. However, if we take a closer look under the engine cowling, we’ll spot the biggest difference between the two variants - the engine. Unlike the Kittyhawk already present in War Thunder, the P-40F is equipped with a 1,300 horsepower Packard V-1650 engine, which in essence, is a licence-built version of the famous Rolls-Royce Merlin engine used to power a number of famous British warbirds, such as the Hurricane and Spitfire, to name but a few.

The new engine allows the P-40F to perform better on low to medium altitudes than its Allison counterpart, but the lack of a more powerful supercharger prevents the aircraft from operating efficiently at higher altitudes. Another change, albeit a minor one that mostly fans of simulator difficulty will appreciate, is the elongation of the tail section. This adjustment was intended to reduce the effect of the high levels of torque generated by the engine on take-off and landing, in turn making these easier to perform.

As we’re sure you already know, we regularly continue to expand the number of vehicles available to players with each major update. However, by doing so we also continue our efforts on updating existing vehicle models in the game which no longer meet our quality standards. With that said, in addition to adding a new modification of one of the fan-favorites of War Thunder, update 1.79 will also bring with it reworked 3D models for all existing P-40Es in the game. The new models feature a much greater number of polygons and improved textures, increasing their accuracy, detail and authenticity.

If you wanted to take your P-40 out for a spin again, but just never got around to actually doing it, then be sure to take advantage of the opportunity that update 1.79 gives you. Dust off that plane that’s been sitting in the back of your hangar for far too long and prepare to see it in a whole new light! Stay tuned to the news to find out more about the latest developments regarding War Thunder’s next major update. Until then!

Commenting is no longer available for this news
Rules
Skirtle
44

Plus who doesn't want a P-40 with a glorious Merlin? :D

Been_Benuane, agreed ww2 is where the funs at

Remember folks, shark mouth gives extra penalty on the enemy's morale, making him more prone to bail out of his aircraft in blind terror.

We don't want the enemies to bail out, we hunger for the kills!

Reminds me of something... https://www.youtube.com/watch?v=0VqKa25iFac

Echo203, i saw that coming form a mile away

Hey German players! Shut up about your Leapord 2. It’s coming. Just wait. On the other hand, great job Gaijin for delivering this plane that prop. Heads have been asking for a long time!

Yes I agree those Germane fanboys are the biggest most entitled moaners of all.

so..it was okay when people asked for the Abrams but Germans wanting their proper 3rd gen MBt is somehow a crime? :D

Asgar1205, to be honest they're both as bad as each other. If only people were this hyped about the game actually being balanced

NOOOOOOOOO! We need more bombers that served during the war yet have no variations in the game.

This is exactly the dev blog I have been waiting for... It's awesome that you cover the Leopard 2 in such detail.... oh wait.

Perhaps you have not, but the P-40 has quite a fanbase of pilots who enjoy the aircraft and have been patiently awaiting a new variant. Today is their day.

Smin1080p, one p 40 would have been enough, why do you like this variant so much anyways?

We wait news P-40 since 5 years, they are welcome