In short: The most unusual model in the line of the 109 "Messers" - fighter which is composed of two fuselages. Premium status, good vertical maneuver, excellent weapons and speed… well just a pearl in the collection!

The Bf 109Z is a prototype heavy fighter version of the well-known Bf 109, developed as a stop-gap measure to address the Luftwaffe’s urgent demand for a new yet inexpensive and easily mass-produced alternative to the rapidly aging Bf 110. Although the project never surpassed prototype stage, War Thunder pilots themselves will have the chance to test out the concept’s effectiveness with the upcoming update 1.79!

With the start of allied bombing campaigns against German strategic targets in 1942, the Luftwaffe was forced to go onto the defensive for the first time in the war. This sudden turn of events sparked an urgent demand for new heavy fighter and interceptor designs that would counter the ever increasing onslaught of allied bombers and their respective escorts. Although the Messerschmitt company was already working on such a new aircraft that would replace the dated Bf 110 - the Me 210 - several problems during development delayed the project’s completion. As a result, new versions of the Bf 110 had to be developed to counter the new threat. However, the RLM (German Air Ministry) wasn’t content with the creation of even more modifications of the aircraft as they planned to decrease the amount of different variants for all aircraft in service at the time in hopes of addressing logistical problems that strained production. Inspired by the previous He-111 “Zwilling” project, Messerschmitt engineers began work on a similar alternative heavy fighter based on the Bf 109, that could easily be mass produced and offer better performance (in reference speed) than the Bf 110 already in service, whilst at the same time being cheaper to manufacture than newly designed machines.

By taking two standard Bf 109Fs from the assembly line and “welding” them together, Messerschmitt engineers created what would become known as the Bf 109Z-0 - the first prototype of the “zwilling” Bf 109. In 1943 however, a bombing raid of one of the Messerschmitt plants near Augsburg led to the destruction of the prototype, cancelling the planned tests. Despite this setback, the engineers kept working on the concept and less than a year later, in spring 1944, a new Z-1 prototype, based off the Bf 109G-6, was created. The second prototype differed from the first one, apart from being based on a later variant of the 109, in the abandoning of rifle-caliber guns in favor of interchangeable large caliber autocannons, a common trend for late-war German machines. In the end, the project was ultimately cancelled as resource shortages began afflicting the German industry in the final stages of the war and the concept of a twin Bf 109 fighter was abandoned for good. 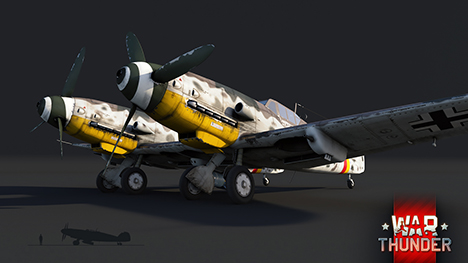 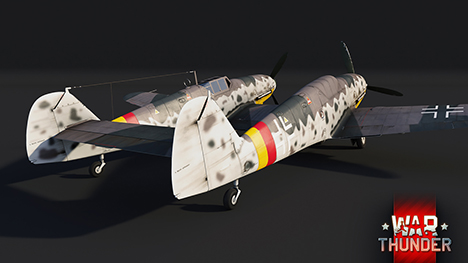 In War Thunder, the Bf 109Z-1 will be a new German premium vehicle of the fourth rank, available soon for purchase to all players as part of a bundle in our online store. Pilots that have already flown some of the later modifications of the Bf 109s in the game may already be drawing some parallels between the Zwilling and the base models. However, don’t let the fact that you see two glued-together Bf 109s fool you into thinking that you’ll be flying the same machine, just doubled. It’s quite the opposite in fact. Although the Zwilling is based off two regular Bf 109 fighters, it flies very much like a heavy one in this configuration. Due to the overall larger size and weight of the machine, future pilots of this aircraft should come to expect worse handling characteristics. In particular, veteran 109 pilots may feel the negative effects of a decreased top speed, acceleration dynamics, climb rate and agility. 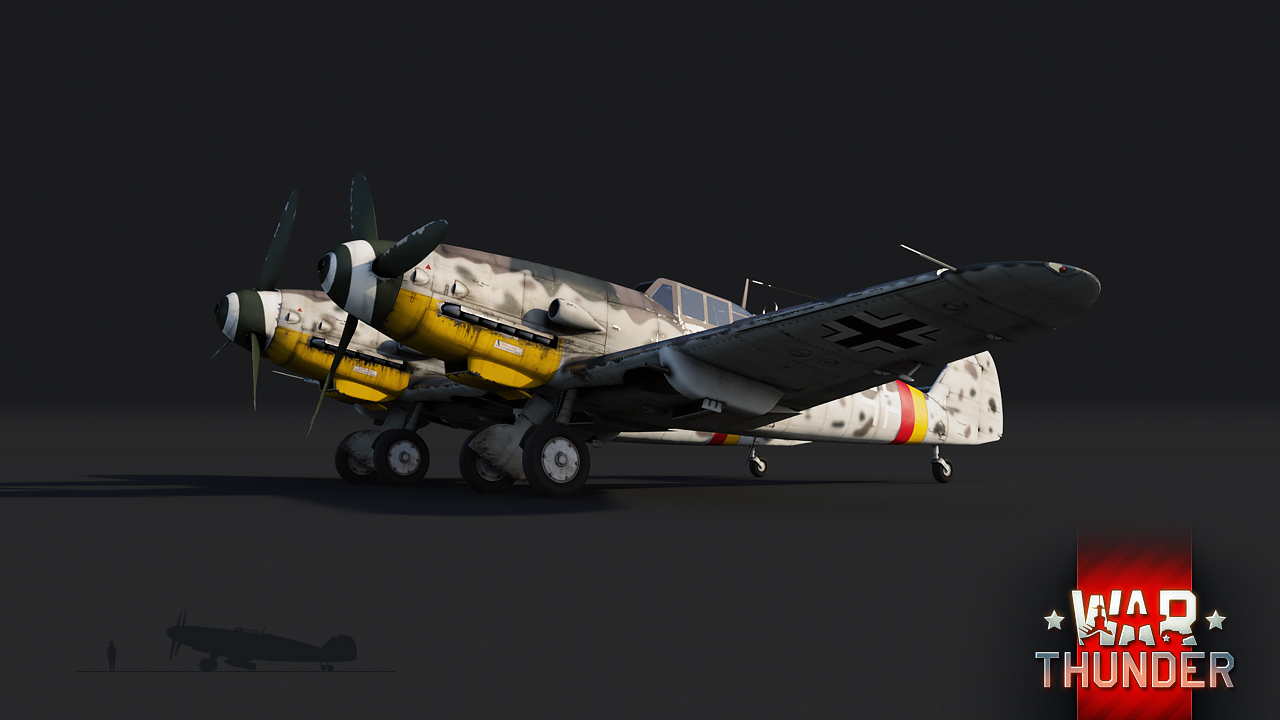 Interesting: The idea of a double-fuselage aircraft attracted aircraft designers from different nations. The Germans successfully used the twinned He 111 bomber and in the USSR there was a project to build aircraft from two “Airacobras”. The only true serial two-fuselage fighter was created in the USA - popular in our game, the “Twin Mustang”.

However, the maximum speed (which is 712 km/h at an altitude of 6,500m) along with the climb rate and maneuverability, remains quite decent for a vehicle of this class, and keep in mind that we are talking about heavy fighter. Being designed to counter formations of lumbering allied heavy bombers, the Bf 109Z received a more than generous armament loadout, making it perfectly suited for the job at hand. Four 30mm MK108 autocannons,  are what one could perhaps argue to be a bit of an overkill, even for the toughest of bombers. However, MK108 cannons are known to fire projectiles at a relatively slow rate and low velocity, making them hard to use at long-distances or high speeds. Nonetheless, an experienced pilot that knows how to utilize this weapon to the greatest possible effect will rarely be disappointed by the sizes of holes he will leave in the enemy’s airframe and wings.

Check out one of the more unusual and lesser known versions of the Bf 109 in War Thunder with the upcoming update 1.79. Be sure to keep a close eye on the news section to never miss any information we publish in regards to the next major update coming to the game. Until then, we wish you a clear sky pilots!

Commenting is no longer available for this news
Rules
MegaFangs
47

I didnt see that one comming

If you dont see the Bf 109 Z coming, im afraid there wont be much left of you with those 4 x 30mm cannon D:

MOM GET THE CAMERA

Smin1080p, Not sure the bias is getting higher right now, dont look promising. Except 4 sparky108, it dosent got anything more about it than other F and G series, and it will be a eazy AF target for P47, BR might be high but if it might get a airspawn, nice. (But gimme some 110, and that german power sure gonna go skyhigh. 110 is ma bae.)

You mean that plane that probably didn't even exist and was just an error in naming made down the line somewhere that people keep blindly pushing the same false sources with? Yeah I totally want that. How about a Kürfurst that actually *did* exist and fly, like the K-6?

I dont recall any "promise" for the Bf 109 K-14. We said at the time it was possible and under consideration, but things change. Very little factual information was found on the aircraft. Unfortunately there was a few model kits and artwork pieces, but nothing really that gave enough to create the K-14 in reality.

Smin1080p, Well, yes it was at Tech tree picture. So we were expecting that. Performance of DB 605L was there too. Sad to hear that.

Its possibly could do more damage with only 2x .50cal Brownings but who cares. 4c30mm SOUNDS better

Is italy getting another plane besides the iar? Its 1 year since you announced reggianes...

We got the first Reggiane plane last patch, so an addition in this direction is totally possible, the Re 2005 would be the best thing that could come in a DevBlog at the moment.