Leopard 2A4: Setting The Standard
31 May 2018 Development

In short: the most up to date "Leopard" in-game, a new top-tiered vehicle in the German line-up. It maintains high-level firepower and maneuverability, but now offers additional protection, especially in the front.

Entering service with the German Bundeswehr in the mid ‘80s, the Leopard 2A4 was the final modification of the early serial production Leopard 2. War Thunder tankers and fans of German ground vehicles can look forward to the addition of one of the most iconic German steel beasts of all time, coming to the game with update 1.79!

Based on the testing results gathered from the various different Leopard 2K prototypes, a new Leopard 2 prototype was constructed that would be more representative of the final version of the vehicle. Designated as Leopard 2AV, the new prototype featured a redesigned hull and turret over the Leopard 2K. Furthermore, the prototype was tested with two different cannons; the British L7 105mm rifled and the German Rheinmetall 120mm smoothbore cannon.

In 1976, the Leopard 2AV was sent overseas to the United States to be comparatively tested against the new American state-of-the-art XM1 Abrams. During testing, the Leopard 2AV proved itself as a good counterpart to the Abrams, outperforming its competitor in terms of fire accuracy, whilst demonstrating somewhat inferior protection and gun handling. Upon arriving back to its homeland with positive testing results, the decision was made to begin mass production of the Leopard 2 in 1977.

The production version Leopard 2, however, differed from the AV prototype in receiving an increased level of protection before mass production began. Mass production of the Leopard 2 started in 1979 with the Leopard 2A0 forming the first batch that would enter service with the German Bundeswehr in late 1980.

A total of 695 Leopard 2A4s were built out of the total of 2.125 early Leopard 2s that were manufactured between 1979 - 1991. The Leopard 2 and its variants served primarily with the German Bundeswehr, but a number of export vehicles were sold to nations world-wide, ranging from Canada and Chile, over Denmark and Austria to Greece and Turkey to name a few. 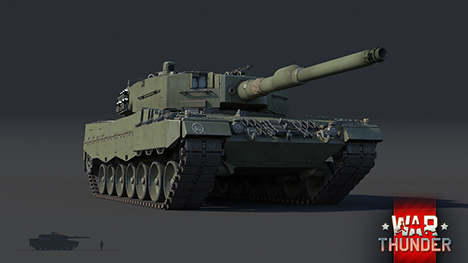 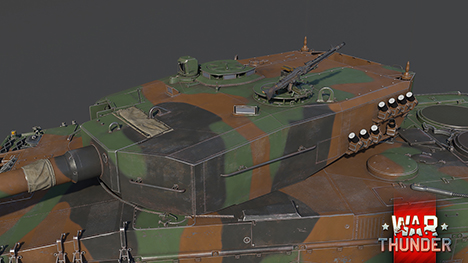 In War Thunder, the new Leopard 2A4 will continue to expand the roster of vehicles available to tankers at rank VI of the German ground forces tree. Compared to the already familiar Leopard 2K, the 2A4 vastly expands the options available to its commander by offering noticeable improvements most notably in the protection department.

Unlike the Leopard 2K, the 2A4 offers significantly better protection compared to its predecessor. As the Leopard 2A4 moves away from relying on thin yet sloped spaced armor to using a composite solution of far greater effectiveness, it’s able to more often reliably deal with incoming enemy fire than the 2K. Capable of taking hits and remaining combat operational allows the Leopard 2A4 to take on a much more central role in combat, being able to get into the thick of the fighting with favorable odds of coming out of it victorious.

However, better armor protection usually comes at the expense of weight. This is most certainly the case with the Leopard 2A4, as its combat weight of 55 tons presents quite the weight increase over the 2K’s 50 tons. As both machines use a 1.500 horsepower engine, future Leopard 2A4 commanders will have to take into account the slightly reduced power/weight ratio as well as a decrease in top speed by about 2 km/h, as a result of the increase in weight.

The primary armaments choice also remains the same on the Leopard 2A4. Using the same Rheinmetall 120 L/44 smoothbore cannon, aspiring commanders of this machine can take full advantage of the experiences gathered from playing the Leopard 2K to immediately make the most out of the signature accuracy and damage offered by this legendary gun. 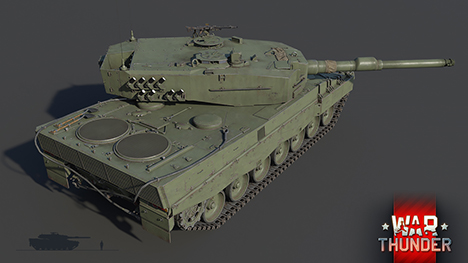 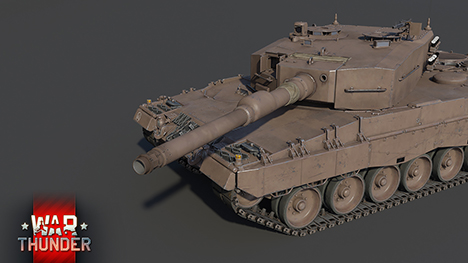 Interesting: judging from US correspondence, the Germans sent a lightweight prototype of the "Leopard" without combined armour for testing in the USA.

The Leopard 2A4, however, is a lot more vulnerable against aerial threats. Whilst the Leopard 2K offered a devastating roof-mounted 20mm autocannon for use against unsuspecting aerial targets, the 2A4 is only equipped with two rifle-caliber machine guns, one mounted coaxially and the other on top of the turret. This means that Leopard 2A4 drivers will have to coordinate their efforts with allied SPAA drivers in order to stay safe from aerial attacks.

The Leopard 2A4 will be charging the top tier ground battles of War Thunder with the release of the upcoming major update 1.79. What do you think about the Leopard 2A4? Excited to see it come to the game or are you looking forward to something else? Let us know in the comments below and stay tuned for more information on the next major update coming to War Thunder. Until then, tankers!

Commenting is no longer available for this news
Rules
Adargi
82

Are the German fans happy now?

1 week and they will cry for other vehicle...

You all going to stop moaning now? 🤔

Ofcourse not! ;) Now all the leopard-moaning people are done I finally won't be overshadowed when I go ask for real usefull vehicles. Not top-tier stuff that I can't play or research the next few years because of the endless grind. WE WANT (PRE)-WW2 VEHICLES! How about some British bombers, Dutch planes or more Italian vehivles. We have 9 post war-devblogs and only 4 (pre)WW2 ones. I am sure there will be some nice (pre)WW2-vehicles, but we want devblogs too. :(

T4FR, On topic: Pictures look nice, I am sure many people will be excited about it. Good job!

Hopefully. But at what cost?

See? There was no reason to worry :)

https://coub.com/view/byrwg Unofficial Soundtrack for this devblog

Kind of racist but also funny, juuust along the edge. Well done! You can step in my shower now!

Object 906 will still outperform it.

I will obey now my master, I want to be a Good boy

WHAT about the 2a6 haha jokes

What are the "But Muh Leo" people going to do now? Probably ask for the A6.

Have you considered that the Leo 2A# was so high in demand because Germany had no actual counterpart to the Abrams, T-64B (and Challenger 1)? Now, I'm not defending the people that were yelling about it, but one has to understand both sides of the coin.

Gramstaal, Everything could compete with the 64B and chally

Thats the question when gaijin give M1A2

Now to wait for people to yell that the Leois underpowered and say it needs a lower BR. That's the cycle, right?

to be fair, all the top dogs should be +1.0br higher, look at the state of the tanks in the 8.0br bracket, really cool tanks like the later M60s, leo 1A1A1, T55 and Type 74 are borderline useless because they are facing things that outclass them massively. Some breathing room would be nice.

Remiak, the main issue there is not the BR of the newest tanks, its the BR of the older tanks. All the M60s and the Type 74 should go down 0.3 at least

no, only american players do that.

*cod-killer02, How? The AMX-40 should be 9.0, and not any higher, it’s a 105mm with lightweight composite, it can’t hold a candle to the current top tier tanks

yamatokodasai, This is no warframe

Funny how everyone was moaning about Gaijin and now that they announced the Leo 2A4 they are the best all of a sudden.

And I bet the same people will be doing the same thing next update with whatever the FoTM is...

TurkishPanzer35, I would say the Abrams is a bit more famous.