The Ki-108 is a prototype late-war, high-altitude army interceptor design derived from the Ki-102 and is one of the last Japanese heavy fighter designs of WW2. Since the Ki-108 along with many other highly advanced Japanese aircraft were kept in reserve for the defense of the home islands, it never saw any actual combat. However, this is about to change with War Thunder’s update 1.77 "Advancing Storm", so get ready to rewrite history!

Development of the Ki-108 began in April 1943 after Kawasaki wanted to fulfil a standing requirement with the Japanese Army for a heavy interceptor that initially began with the Ki-45 heavy fighter series. The Ki-108’s design was derived mostly from the previous Ki-102 project and took some elements of the Ki-96 as well, effectively combining the two designs into one. After the first B-29 Superfortress bombers made their appearance over the Japanese home islands, the need for such a high-altitude interceptor became even more emphasized. Two Ki-102 otsu airframes were taken from the assembly line in 1944 to produce the initial Ki-108 prototypes. Compared to the Ki-102, which was intended as a low-altitude attack aircraft, the Ki-108 was an interceptor meant for high altitude operations. To allow for this, the Ki-108’s cockpit had to be significantly reduced in size and was to be hermetically sealed. This effectively turned the Ki-108 into a single-seater, reduced weight and decreased the strain on the engines all at the same time, which allowed for better performance at higher altitudes.

The two initial prototypes were completed in July and August 1944, respectively. An improved version of the Ki-108 was designed based around the Ki-102 Hei, featuring a wider wingspan and a longer fuselage, in an effort to improve high-altitude handling. Two examples of the Ki-108 Kai variant were built and subsequently tested in 1945. However, the worsening war situation for Japan prematurely concluded testing of the type and both versions never left prototype stage, yet alone seeing combat. A total of four Ki-108s were manufactured between 1944 - 1945. 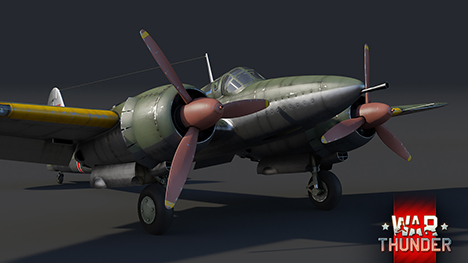 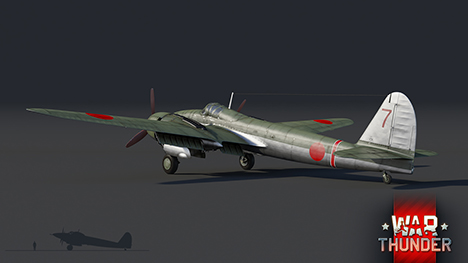 In War Thunder, the Ki-108 will be a new addition to the Japanese aviation tree within the heavy fighter line at rank III. Being based around the Ki-102, the Ki-108 will offer similar handling characteristics with which War Thunder pilots have already made themselves familiar with when it comes to Japanese twin-engine fighters. However, the twist that comes with the Ki-108 lies within its high altitude performance. The two Mitsubishi Ha-112-II Ru 14-cylinder engine produce an impressive 1,500 horsepower each, in turn allowing the Ki-108 to reach speeds of up to 580 km/h and even operate at altitudes of over 13,000 meters.

To successfully engage and take down its intended targets, primarily heavy bombers,  Ki-108 pilots have a very suitable arsenal of weapons at their disposal. A single 37mm cannon coupled with a pair of 20mm cannons is bound to make the bomber pilot in your sights sweat bullets with every meter you come closer. Naturally, if a bomber has reasons to be afraid of the Ki-108, so do other fighters too. Needless to say, even a single hit from the merciless 37mm cannon to the airframe of a single engine fighter is enough to make every trace of it disappear into oblivion.

The Ki-108 is currently undergoing its final trials and is expected to arrive with War Thunder’s update 1.77 "Advancing Storm" very soon. Stay tuned to the news to find out what else the next major update for War Thunder has for you. Until then!

I am sorry, I am not the best poet. I should try haiku, it's easier :(

I think people wanted love for the ground forces tree haha, but still I love the look of this plane can't wait for dev server :o

Why no 4k resolution wallpapers? :(

How many of you need it? (serious question) Upvote comment, so we can see you.

DinoTheSkeleTon, Must not be a Japanese .50 then, since the nerf they're borderline useless.

Very good for Japan, but I want tanks .... please

Stop begging for tanks on aircraft blogs you child.

Yes, at least one new high tier tank for Japan and with this gorgeous aircraft and im happy with this update...

This is Japan's secret weapon against the M1 and T-64B

Who really cares about this kind of aircraft, Please show us the MiG 19's

Who cares? People who like 2 engine fighters? People who do not like Jets? Try to look at the world that is a little further than the end of your nose :(