A fighting vehicle that needs no introduction - The M1 Abrams is one of only a small number of tanks that have gained such a reputation and worldwide fame that surpasses legendary status by a long shot. War Thunder tankers and fans of modern military vehicles rejoice! The M1 Abrams is charging at full speed to the top ranks of War Thunder’s ground battles with the upcoming update 1.77 “Advancing Storm”. Get ready!

Once the unsuccessful joint German-American MBT-70 project had been shut down in 1971, the Congress redistributed funds to the further development of the XM815 project, later known as the XM1 Abrams. The development of the XM1 Abrams was a competition between two designs of the Chrysler and General Motors companies, respectively. Early July 1973 marks an important date for the project after representatives of both companies travelled to Great Britain to witness the development of the new composite armor, named Burlington. Impressed by what they saw, both companies decided to reevaluate and optimize their designs’ armor layout to increase its effectiveness, with General Motors changing the front shape of the turret to a sloped surface, whilst Chrysler retained its vertical design. By 1976, the XM1 prototypes were being readied for testing, with the finishing touch being the installation of the M68 cannon.. Testing of both prototypes took place in the presence of the new German Leopard 2 tank, which was shipped to the U.S. for comparison purposes. Once testing was concluded and the results evaluated, the turbine-powered Chrysler design was proclaimed the winner of the competition and thus the Chrysler design would soon enter production as the M1 Abrams.

The M1 entered production in 1979, with the first production version M1 leaving the factory floor in February 1980. Production of the M1 continued until 1985, with an improved M1IP version being produced briefly between 1984 -1986. By 1985, several thousands of M1s had already been manufactured and put into service. In August 1985 however, the M1 was outfitted with the licence-built version of the Rheinmetall 120mm gun, as found on the Leopard 2 tank and subsequently entered production as the M1A1 Abrams. Following this modification, earlier M1 units would progressively be upgraded to M1A1 standard, but this is a story for another devblog in the future. The M1 Abrams saw the most active service with US forces primarily in operations in the Middle East, but known operators also include Australia, Kuwait, Saudi Arabia, Egypt and others. Nonetheless, the American M1 Abrams is one of the most successful and widely fielded modern-day MBTs in use anywhere in the world, and rightfully deserves its iconic status alongside other American legends such as the M4 Sherman and M60 Patton, to name but a few. The fact that the M1 Abrams is still being manufactured and used today, almost four decades after its introduction, serves as a testimony to that statement. 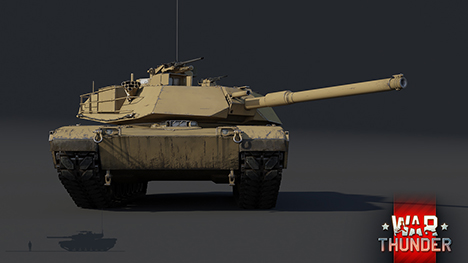 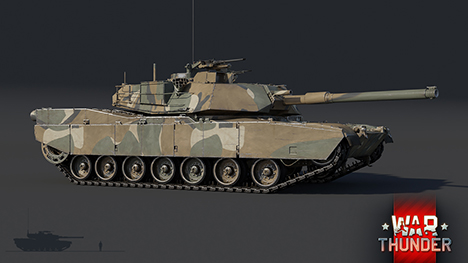 In War Thunder, the M1 Abrams is going to be a new addition, that will expand the roster of vehicles available to players at rank VI of the American ground forces tree. Despite its enormous size and impressive combat weight of 60 tons, the M1 Abrams can hardly be considered a lumbering beast. Its 1,500 horsepower multi-fuel turbine engine is able to bring the Abrams up to a top speed of 45 mph ( 72.4 km/h) and even manages to achieve 25 mph (40 km/h) in reverse. With mobility like this, the Abrams is able to swiftly maneuver into position and even relocate to other locations on the battlefield at a moment’s notice. Apart from the excellent mobility, which is an offensive capability in its own right, the Abrams is also outfitted with a powerful main cannon and a pair of machine guns. For the primary armament, American engineers choose the 105mm M68A1 cannon, capable of firing a wide range of ammunition types. In addition to the cannon, the Abrams is also equipped with a coaxial 7.62mm machine gun, one more 7.62 is mounted near the loader’s hatchet  and a good old .50 cal is mounted on the roof of the turret for anti-air defence.

Aspiring M1 commanders can expect effective protection against some of the most commonly used projectile types found on the higher ranks. However, it’s worth noting that all of this effective armor is mostly placed around the front portion of the vehicle’s hull and turret, as is common for modern MBT designs. In comparison, the side armor is relatively thin and can easily be pierced even by cannons of lower ranked vehicles. As the M1 Abrams was specifically developed with crew protection in mind, it comes to no surprise that several special protection features found their way onto the M1’s design. Fuel tanks in the front of the hull were placed  in armored containers, that prevent fire in the fighting compartment and the fuel served as additional protection against HEAT shells as well. One more solution that provided better crew survivability was separate ammunition storage that was also in armoured containers. In cases where the powder charges were on fire, gas pressure was released through special blow-out panels that were mounted on the turret and the hull. Such system, if the panels functioned properly, would allow the crew to wait out the fire in the ammunition storage whilst remaining inside a tank, and after the fire was out, the crew could either leave the tank or drive it away from the battlefield.

Although this protection feature will be represented in the game as well, aspiring commanders of the Abrams shouldn’t expect a guaranteed “second chance” from this protective feature.Yes, it’s possible to prevent a sudden and quick destruction of the vehicle, but only if a case was hit and powder charges caught fire. If the hit detonated HEAT or HESH ammo - the tank would be destroyed. If the player is able to extinguish the flames, they will be able to withdraw to safety for repairs and rearming. Nonetheless, these protective features will still slightly increase the Abrams’ survivability on the battlefield and are bound to save the occasional tanker from an untimely demise under the right circumstances.

The first production version of the M1 Abrams has been dispatched to the troops fighting on the front lines and is due to arrive with War Thunder’s update 1.77 “Advancing Storm” very soon. Stay tuned to the news to find more about the next upcoming major update for War Thunder. Until then, stay safe on the battlefield!

Commenting is no longer available for this news
Rules
brofessor79
80

are you jealous ? :D

Jelloyy, Frankly, no one else was begging Gaijin quite so brutishly as those wanting the Abrams. Challenger 1? Awesome Surprise, as was the Leo 2K, Abrams was to be expected, so it is great to finally silence the idiots that moaned on every devblog "where is mah embodiment of freedom Gaijin!?"

Tbh, it was quite obvious Every nation getting a new T6 mbt (sorry Jap and homeland Ita :( ) , Challenger 1 is quite contemporary to the M1 if I am correct, and the name of the update...advancing storm...M1 Abrams basically won operation Desert Storm...all the hints were quite clear

*MarcoGn97, I'm thinking a good tank for italy might be the OF-40. at some point, whenever Italy gets a full tree.

American Bias is stronger than ever!

alexlaza, even the base model could take on all three.

so other countries have new vehicles of 80s,while german only have a leopard 2k of late 70s..

So you are the one who looks only at age? Good luck!

Stona_WT, Well age, armor, speed, survivability in general and obviosuly the fact that its a prototype in contrast to the other countries getting a production model. I don't see a single reason why the Leo 2K would be a balanced choice against a M1 Abrams and Challenger 1. An early Production Leo 2 would have been the best choice here. Not going to paint everything black the Leo 2K will still be a viable option I guess depending on its guns performance. The Leo is hardly any faster than the M1...

I would say that Leopard 2K is a pretty good match to M1 Abrams - if you have read the devblogs, you can note that Leopard has the Rheinmetal 120 mm gun, while the M1 uses the older L7/M68A1 105 mm gun.

Stona_WT, Then why is it that every nation gets a production version of their 3rd gen MBT while Germany gets a 7+ years older prototype? I don't want to start a conspiracy or something, I think Gaijin knows what they are doing, but I, too, would like to understand the intention behind this...

So the Germans get a prototype that only has maneuverability and a gun and everyone else gets production tanks with great guns mobility and much better composite armor. Is the leopard 2K really the only tank 6 tank we get for Germany in this update?

how can you complain about the leopard 2K? at least this tank have a 120 mm rheinmetal .... think about japanese tier 6 and the brenus for the french .... this two nation will be steamrolled

Eladorne, Since when do japan and France fight alone in tier 6? They always fight with another nation unlike Germany... we Germans mostly fight as a single nation in tank RB and then we get a prototype that he’s outclassed by everything else

This was already explained by your fellow players. Some files are still classified and it's not easy to get them. They can't just make a vehicle without getting the full details of it. Unless you want magic. Patience please. More thinking, less complaining. Cheers

So you want to lose the 2K's 120mm for a 105mm, and you don't want the composites of the production Leopard 2? Why on Earth would you pick the 2AV?

Potaka, I want KV-2 mech from april fools in normal tech tree, so what?

Cool looking modern tank, I might even progress as far with grinding that I can play it after some years! Now after 6 modern tanks and 1 very late prop plane DevBlog, I hope we will get loads of DevBlogs on (pre-)WW-2 planes and tanks ;). Cause it would be nice to have some vehicles in this update that I can actually play in 2018 :D.

Now i want Leopard 2A1

you will get a leo 2k

This was already explained by your fellow players. Some files are still classified and it's not easy to get them. They can't just make a vehicle without getting the full details of it. Unless you want magic. Patience please. More thinking, less complaining. Cheers

spooT, If the Challenger I and the Ambrams were possible to introduce, and both of there are classified tanks, the Leopard 2A0/1 should not be a problem.

HOLY MOTHER OF ALL THATS HOLY, i love you mighty snail, hail the snail... Im glad i have finished the American tank tree, i will jump right on this.. And a devblog on a saturday? you spoil us mighty snail

Sometimes Snail can be generous ;)

Stona_WT, Sometimes, the Snail is all we need in our life :D

I want my million dollars. What now? :|

Stona_WT, do you know if it will be researchable from MBT 70 or M60 Rise P?