Whilst the T-64A was entering service, research for potential improvements was already underway. The conducted research eventually led to the creation of the T-64B in the 1970s, which amongst other improvements, was given the option to fire ATGMs through its main gun. Fans of Soviet armour will eagerly await update 1.77 “Advancing Storm”, as the T-64B will be one of the many new vehicles coming soon to War Thunder!

Development work on the T-64B started in the early 1970s, with Soviet engineers conducting research on firepower improvements for the T-64. Specifically, they wanted to give the T-64 the ability to fire ATGMs through its main gun via a complex guidance system. This attempt succeeded and resulted in the construction of the Object 447A.

Beside the ability to fire “Kobra” ATGMs, the Object 447 also received a new gun stabilizer, a modernized autoloader and improved electronics. However, as the ATGM capability came at a high production cost, the decision was made to produce two separate versions of the improved T-64, one with and one without the ATGM capability. The two new tanks would be designated T-64B and T-64B1 respectively. The resulting high cost of the T-64B led to the fact that far more T-64B1s were manufactured due to their lower complexity and production cost. Throughout the years, T-64s were continuously being modernized and improved upon, incorporating many new features that would extend their capabilities and service life. It’s safe to say that the later modifications of the T-64 and its prototypes laid the foundation for new Soviet tanks to make their appearance, such as the T-72 and T-80. In fact, most of the improvements featured on these younger Soviet MBTs were initially tested on the T-64 chassis. 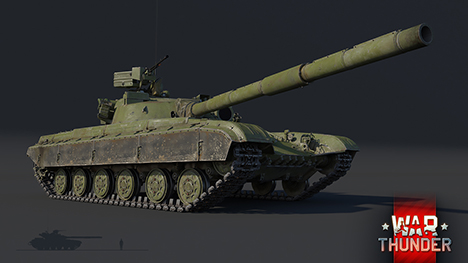 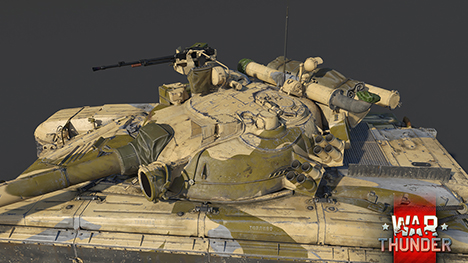 In War Thunder, the T-64B is going to be a new addition to rank VI of the Soviet ground forces tree, offering tankers with more tactical options and flexibility on the battlefield. Whilst the T-64B inherits many features and characteristics from its predecessor, the T-64A, it does possess some notable improvements over his older brother. One such improvement for example, is the option to fire the 9M112 “Kobra” ATGM through its main gun. The Kobra ATGM is radio guided and can thus be easily controlled by the player using the sight, instead of controlling it with movement keys. However, aspiring commanders of the T-64B will have to keep in mind one limitation that comes with this upgrade that affects the ammunition loadout in particular. Although the T-64B could carry the same amount of shells as the previous model, tank crews were often instructed to mostly load conventional ammo alongside a couple ATGMs. This imposed limitation will also be reflected in the game, resulting in the player being only able to bring a handful of ATGMs into battle whilst driving the T-64B.

Another change that distinguished the T-64B from his predecessor is its increased armour protection on the front portions of the hull and turret.

Composite armour on the turret with inserted plates of hardened armour had been replaced during the Т-64А production. This design had poor survivability: after multiple hits, welds on the rear side of the plate could be destroyed. The new turret featured ultra porcelain ball filling, thus having the same level of armour protection it had much better survivability and less mass. Beginning in 1983, the upper front plate of the hull of the T-64B tanks also received some changes to its composition that resulted in greater effectiveness against all projectile types. Besides these major changes, the T-64B also received a turret-mounted smokescreen system “Tucha” and a high-caliber NSVT machine gun added to the commander’s cupola for use against low flying aircraft. The incorporated changes should provide aspiring T-64B commanders with a greater number of tactical options, increasing their overall flexibility and effectiveness on the battlefield.

The T-64B mod. 1984 is coming to War Thunder as part of update 1.77 “Advancing Storm” at rank VI of the Soviet ground forces tree. Stay tuned to the news to find out more about the next major update for War Thunder. Until then!

Commenting is no longer available for this news
Rules
Agr555
17

there is no one here by that name, sorry

More like He-177 pls... Why are rank 6 tanks such a high priority now? Then you'll add the La-200 of which only 1 prototype was produced but you won't add an aircraft that actually saw combat and had over 1100 produced? Not to mention the I-185 of which 4 were produced.... and is in the main tech tree. Su-57 will probably be in the next dev blog ffs.

Looks absolutely stunning. But I have to ask...where can we see tha list of development priorities if there is one? So, so many vehicles suffer because of their B.R. rating and power creep. And flight models too.

Tovarish, we cannot reveal sicrit documints. If we would show them to you, Tovarish, you know what will be next, right?

such a beauty! love it

second reason for me to stop playing 9,0BR

Personally I'm not a fan of using ATGMs but I'll gladly take the big MG and the extra armor.

So this against Challenger and Abrams? Seriously?

I know right, i really thought that this update would be about the innovative modern tanks yet here we are with the T64. Cmon Gaijibles couldve been the T72, one of the most known tanks in the world

This and the BV

SPANISH_AVENGER, The BV version isn't any different apart from the Kontakt-1 armour and different smoke grenade system. It still has the same shitty reverse speed, the same cannon, and is otherwise practically the same vehicle as the T-64A, only with added armour, ATGM, and hopefully better APFSDS rounds. All of these T-64 versions are comparable to late Chieftains but not the bloody Challenger! I don't doubt they've found some ‘secret documents’ to balance it out but why not just add the T-80U, for example?

Firstly, I don't think it will come. Secondly, if it comes, it will let you down.

FINALLY, YES! THIS IS A DEVBLOG I WAS LOOKING FOR!!!!

This is not the devlog you were looking for.

The devllog we are loking for is the ABRAMS devlog