The La-200 is a Soviet prototype jet interceptor that was developed to carry a new type of radar system. Although just one of several competing designs, the La-200 was never mass-produced. But now, War Thunder pilots will be able to prove the merits of the La-200 when it soars into War Thunder with update 1.77!

In 1948, Soviet high command issued a requirement for a two man, all-weather, twin -engined jet interceptor that would be capable of carrying a new type of radar system called “Toriy” (Thorium). All three Soviet design bureaus (Lavochkin, MiG, and Sukhoi) developed a prototype for testing.

Lavochkin’s design, the La-200, had a long fuselage to accommodate its two turbojet engines, swept wings, and a large cockpit for two men. The La-200 took its maiden flight on September 9th, 1949. It was the only aircraft of the three designs to pass initial trials.

By the early 1950s, the La-200 was ready to enter production under the official designation La-17. However, due to the appearance of the Yak-120 (later known as Yak-25), which surpassed the La-200’s performance in testing, the La-200 order was cancelled in favor of the Yakovlev design.

Only a single prototype of the La-200 was ever built, and it was modified several times during development to improve performance, correct flaws, and test other radar systems. 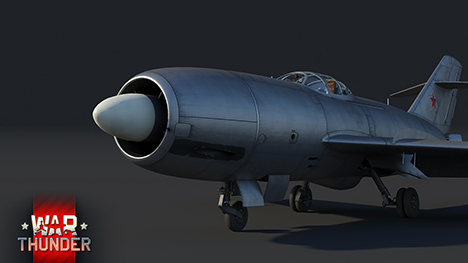 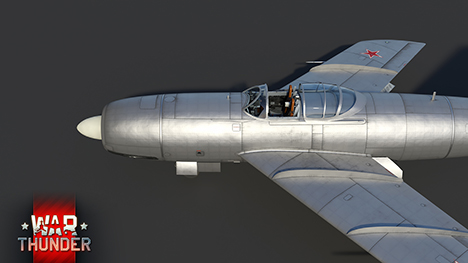 In War Thunder, the La-200 will become available as a rank V jet fighter in the Soviet aviation research tree. Although the La-200 never left its prototype stage and didn’t see active service, War Thunder pilots will be able to test this unusual-looking fighter jet against its contemporaries.

The La-200 has an unusually long fuselage (uncommon for fighter jets of the era) designed to accommodate its two Klimov VK-1 turbojets. One turbojet is mounted on the front of the La-200 and the other is mounted on its rear. An interesting aspect of the La-200 design is the placement of the front  engine exhaust, which is underneath the fuselage instead of behind it. Conversely, the rear engine’s exhaust is fitted directly behind it as is more common for fighter jets.

Regardless of its unusual design characteristics, the La-200’s dual-engines enable it to reach speeds exceeding 1,000 km/h! In addition, the La-200 was well-armed. Three 37mm N-37 autocannons were installed in the nose section—two on the right-hand side and one on the left. With such heavy armaments even a short,  well-placed shot is more than enough to send an opponent spiraling to a fiery doom.

However, there’s a price to pay with such high-caliber weapons: limited ammunition. Don’t shoot carelessly. Make every shot count!

The La-200 is on final approach and expected to arrive in War Thunder 1.77 update. Stay tuned to find out more. Until then!

You have to be logged in for posting comments
LeRat67
72

So thousands M8 Greyhound were built and it is still a rare event premium vehicules in WT, one La-200 was built and it's in the regular tech tree, seems legit.

The M8 Greyhound is not a particularly useful and does not really have a completed suited place in the tree. The US tank tree is hardly lacking in content and more will come, however when it comes to having event vehicles that providing something neat and cool that players want, the M8 found its place. The La-200 is a more general use vehicle that can quite nicely slot into the main tree.

Smin1080p, I disagree. Compared to the M2A2 which is lower than it, it has a role akin to the M22. What you should do with that premium is place it as a hidden vehicle after the m2a2. It's not got much use as a premium and only Tier 3 or higher players could achieve it. It's got no place in premiums since it isn't good and it gets stuck in worse places. It's just an m22 with tire tracks and a love of being stuck in mud. It serves no purpose to be a premium and should be a hidden vehicle in the normal tree

Well, not like the Greyhound was very hard to get.

Thurny, That's not a matter of how hard it is to get, that's a matter of rare vehicle or not

DarthGergely, Yeah Give us the Heinkel He-177 fast please

I dont think we made promises for the He-177 for any spesific update. It will come for sure, but we didn't promise a spesific date or update.

Just like LeRat67 said, there was ALSO over 1000 Greif bombers, still you add the La-200 where only one was made.

One? As far as I remember, there were two or three modified many times.

EpicBlitzkrieg87, "Wikipedia article about the La-2000 - Number built: 1. It's not hard to check your facts, yo

Yup, two La-200 and one La-200B. My source is "the complete book of fighters, an illustrated encyclopedia of every fighter aircraft built and flown" (quite an extensive title, I know..).

WOW!!! Next one-built prototype Soviet airplane. May I ask you some questions Gaijin - Where are Italians? Where is the P-47 Razorback? Where are more Bf-110 versions? Etc...

They are working on all those things. Just be patient.

Drezworthy, They said they were working on those things years ago...

They literally recently said they are working on the Italians and we don't need more P-47s as we already have 5 in the game.

Any Italian aircraft coming in 1.77? How about the Aerfer jets? :D

"we have ambitious plans for italian air force"

Zodd74, And the community has no patience. They think we're getting only a couple of devblogs for the next update and that's it. Ugh...

It would be good that you can add prototypes of other nation instead of that is Russian every time, thank you.

I've said it since I joined this game 5 years ago and still it's true; if this were built by Brits it would have more British planes, same if US, Japanese, etc. They would also, almost certainly, make them a little tougher and more powerful because, well, they don't want to do their own side down. You want fair balance, find a game made in a country with no vested interest.

Something tells me that data on Russian vehicles is more easily to come by thus why we see so many additions to that nation. They are still lacking in multi roll aircraft somehow (fighter/bomber).

Add in either Japanese or Italian vehicles, and other countries too. The Japanese have not seen a new tank in a while, so give them something, like O-I Heavy tank.

The OI Was a prototype and not a single vehicle was ever actually finished. War thunder doesnt add paper tanks. Understandly the La-200 was not used in any role but it was at least built and tested.

BRAVO_LCpl_Karma, Except the 10.5 KT and the Panther II.