Several user made vehicles have made it to the game in the past under the War Thunder revenue share program and we are pleased to announce that another user made creation will be making its way to the game with update 1.77 “Advancing Storm”. Pilots, welcome the long-awaited German He 177 “Greif” strategic heavy bomber to War Thunder!

Development of the He 177 began in 1936 as part of the Bomber A specifications issued by the German Air Ministry (RLM). The specifications called for a long range, high speed bomber with a payload of 1,000 kg. Despite the very demanding specifications, Heinkel began working on a mockup which was submitted for review in late 1937, with an order for 12 experimental machines following shortly after in early 1939. However, throughout its development, the He 177 suffered from a range of problems, some of which weren’t even fixed before further development stopped. For example, one of the requirements (which was soon rejected, since it was impossible to implement) from the Air Ministry was the ability to bomb from a dive, that’s why the engineers had to make various workarounds to provide the required flight technical characteristics. To reduce aerodynamic drag and to ensure flight range, two DB 601 engines were installed in pairs on one gondola and worked with a common shaft which rotated one four bladed propeller. Thanks to this it was possible to create the aircraft using a two-engined scheme. But for this reason, the vehicle suffered from severe engine overheating issues and more often than not experienced mid-flight engine failures and frequent fires. In the process of fine tuning the aircraft, the weight was significantly increased, so it became necessary to install a massive frame which could not be hidden - a relatively thin wing or tightly packed nacelles wouldn't fit. As a result, each frame was divided into two racks, each with a single wheel that could be retracted into the wing on opposite sides of the nacelle.

By 1944, development of the He 177 was considered finished, but by that time, the fortune of war had already turned on Germany and the need for a complex strategic bomber had faded. Nonetheless, over 1,000 He 177s were produced across several variants, with most machines seeing action on the Eastern front. However, despite being made in large numbers, the aircraft ultimately failed to make a difference in the war’s outcome as its design maturity came too late, although some of the built vehicles were also used after war’s end. 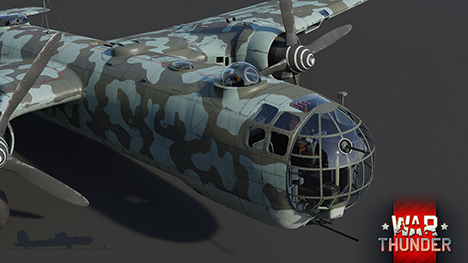 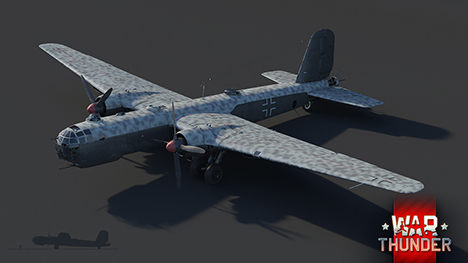 In War Thunder, the He 177 will be the first German strategic heavy bomber to operate from Rank IV of the German aviation tree. Although the machine suffered heavily from overheating issues, often causing engine fires mid-flight, War Thunder pilots can rest at ease knowing this real-life issue will not be reflected in the game. Despite being a bomber, the He 177 can reach a top speed of over 550 km/h. With a bomb load of 6600 kg and a respective number of defensive turrets armed with machine guns and cannons ranging from 7.92 and 13mm to 20mm in caliber, the He 177 offers players a very competitive heavy bomber alternative outside the research trees of allied air forces. Unlike comparable heavy bombers, the He 177 is unlikely going to be easy prey for fighter pilots eager to get an easy kill.

The He 177 A-5 model was created by one of our dedicated players - Daniil Joy_Division__ Zaytsev. The author says that he chose this aircraft because of its unusual design. And since we have changed the Revenue Share program terms, we were able to add this interesting machine to the main research tree, so that all our players will be able to unlock it!

The He 177 Greif will be available to all War Thunder players and fans of German aviation with the upcoming update 1.77 “Advancing Storm” as a heavy bomber of Rank IV of the German aviation tree.

Quick update of text: Bombload updated to 6600kg (in future, it's possible to add even bigger bombload)

Finally the Germans have a Good Long-range Bomber

The love the way it's gear works. I'm glad to see more planes in War Thunder. What completes the game aren't the iconic vehicles that everybody knows. What completes it is the diversity that we're able to get in this game.

That moment when the user base has to start developing content for Gaijin or else it will not be done at all.

Russia now:We have nukes Germany in 1.77:We haz nukes too

Holy CRAP. That landing gear is sexy as hell.

Why that bomb load nerf? It is not historical correct, just like in Avro Lincoln case...