The Peacock-class, was a class of five corvettes built for the Royal Navy in the mid 1980’s, specifically with the purpose of serving in the Hong Kong region. Soon, British captains in War Thunder will have the opportunity to stand behind the helm of this unique warship arriving with the “Raining Fire!” major update!

Between 1983 and 1985, British shipyards produced five Peacock corvettes, specially designed for operations in the waters of Hong Kong. To allow for effective service in the tropical climate, the Peacock corvettes were fitted with features such as air conditioning and the ability to remain at sea even during typhoons.

Upon completion, all five vessels were assigned to the 6th Patrol Craft Squadron, operating out of Hong Kong. During their service, Peacock corvettes would, apart from showing a military presence in the area, also successfully aid the Hong Kong Police Force in fighting illegal immigration and smuggling.

However, after Hong Kong was returned to China in July 1997, three of the Peacock corvettes were subsequently sold to the Philippine Navy, where after several modernizations they still serve to this day.

Similarly, two of the Peacock corvettes were sold to the Irish Naval service in 1988, both of which are still in active service with Ireland. 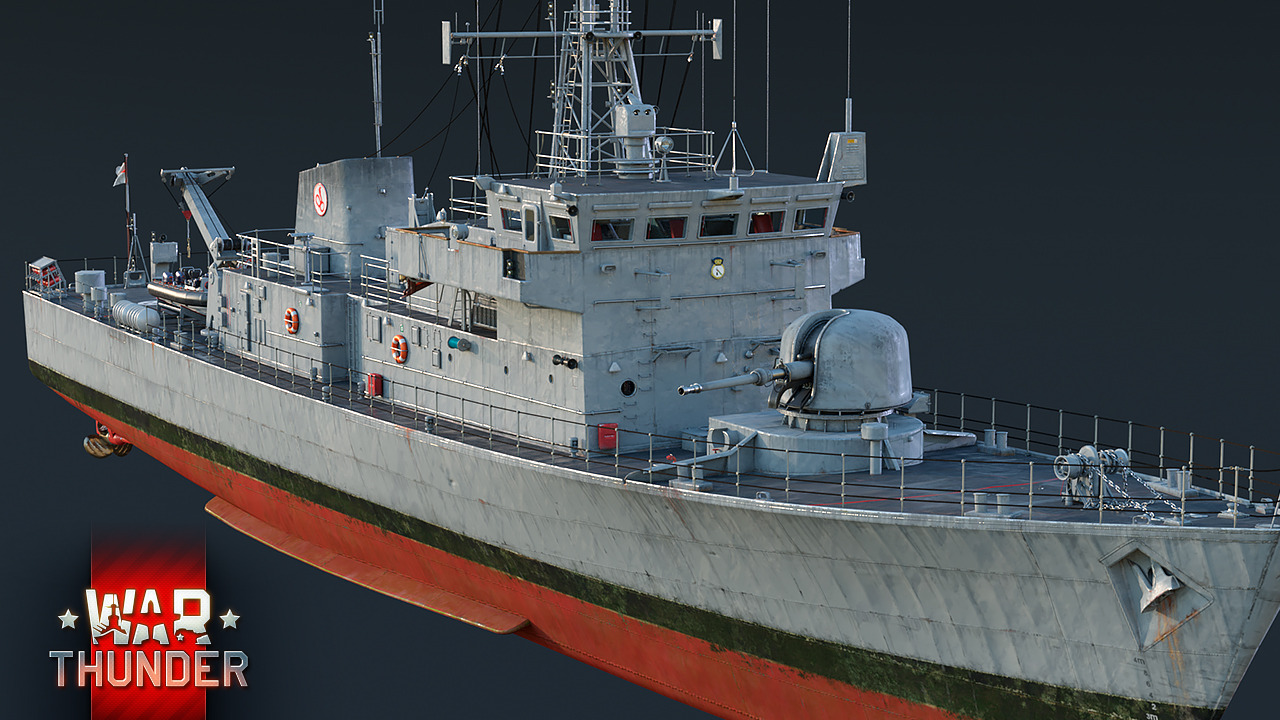 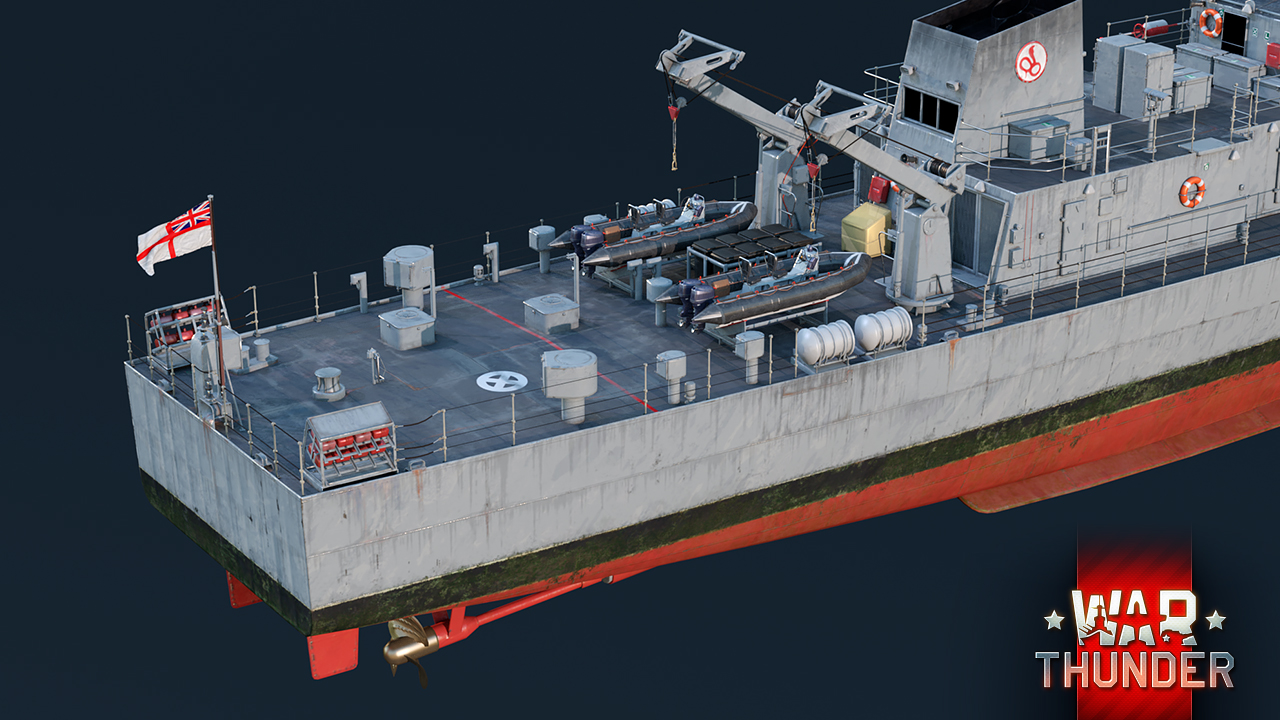 Beginning with the Peacock’s firepower; unlike most other vessels at the lower ranks which captains may have already become familiar with, Peacock is armed with just a single 76 mm OTO cannon in the bow of the ship. This making up its entire weapons arsenal means that captains will need to come up with different ways of taking on different opponents since charging every enemy in this vessel will certainly not always be a viable option. On the other hand, the familiar fast-firing 76 mm OTO cannon has already proven itself in War Thunder naval battles as a reliable and most effective weapon, both when used against surface targets as well as against aircraft.

The Peacock corvette is powered by two diesel engines, generating a combined power output of 14,188 horsepower, thus allowing the vessel to reach a rather modest top speed of 25 knots (46 km/h). Despite not setting any speed records, Peacock’s mobility is adequate to combat other smaller vessels in more confined naval battlegrounds. Besides, being relatively lightly armed and favoring longer range engagements compared to other vessels of its rank, aspiring captains of this vessel are best advised to keep their enemies at distance. In this case, the ship’s rather modest mobility won’t have such a large impact on its performance in combat.

Lastly, Peacock also features a slightly larger crew complement than most other British vessels found at the lower ranks, ignoring a few exceptions. As a result of having 39 crew members serve aboard the vessel, Peacock has a slightly higher combat endurance than other vessels at its rank, being capable of sustaining a bit more battle damage.

The Peacock corvette is arriving at rank II of the British naval tree as part of the upcoming major update and will be available to research for all captains upon the update’s release. In the meantime, be sure to stay tuned to the news as we continue sharing what other exciting new things the “Raining Fire!” update for War Thunder has in store for you. Until then, calm seas captains!

Commenting is no longer available for this news
Rules
Hihikka
22

Stop putting post-WWII ships where they don't fit at all! Either create a separate rank for them or decompress existing BRs, so they can fit between rank I-II boats and destroyers. Köln F220 fighting alongside Typ 1936 or Chikugo and other Japanese frigates fighting alongside Mutsuki is pure nonsense. Adding more post-war corvettes/frigates will not solve the problem. Perfect solution would be to lock post-WWII ships in MM with other post-WWII ships, but that's not gonna happen, i know.

Tbh this is one of the reason that i don't like naval in WT. Imagine next time we have guided missile destroyer fighting WW2 cruiser or something

Fomalhaut99, Imagine a comet hitting the earth and killing only the people who use logical fallacies.

Ahh hey bud while I agree with the Era gap in NF it's much easier to combat than say AF or GF, But it gets much worse when you realize the Frunze & PG-02, Frunze originally named Bystry served the IRN since it was launched in June 1914 (btw layed down in 1913) and vses a Sparviero class PGH from 1993 yeah that's 78 years in deference. it gets worse for the Admiral Nakhimov & Sevtlana class cruisers too, but I don't mind it much it's okay in RB NF EC but normal NF it's painful just lik...

[email protected], like i can understand skill being improved because better aim good coz they be spammin hard deal! but as you pointed out those are so extreme in chronological dysfunction that is Gaijin BR system! dont balance teach people too work as a team instead and revert it all too pure Chronological version of arcade :P 5 Shermans = a tiger take down in the war in reality if it was a functional one because CAS was very real for the Allies! hmm is this kinda thing creatable in the custom games :P

insted of adding new vehicles and removing others FIX THE GAME

You do realize that theres multiple teams that work in amy business right? Especially a large business. The graphic designers making the models would be out of jobs for months which wouldn't be fair to them

It's nice and all, but can you decompress Naval? No amount of new additions is gonna save that gamemode if you don't decompress it and make the gameplay at least partly enjoyable

Give it the option to change to an Irish one through modifications, then it can get two 20mm's and two 7.62mm's

Aye this would been a good Idea for it to either switch between British, Irish & Philippino ship weapons, & iirc the British ones had a few 7.62mm MG besides just the OTO 76mm.

[email protected], And the 20mm's are RH202 so they'd be pretty decent at least it would have some better air defense if it was Irish or Philippino anyway

I too am wondering.

Dozer15, also proped back up for the leclerc!

Cseguka8, you honestly can't believe you're gonna get a response, especially if you phrase it like that

Nice boat model, though, lacking the flamboyance of it's namesake.

Needs a dazzle camo, perhaps one in green and blue would make a nice user skin

now this is a fine looking machine

I'm torn on this one. I worry it won't be very good. But I love it when Britain gets new ships. Gonna have to play it to see.

Conte_Baracca, will be crap unless they add a mod so it has its other gun options