Striking a near perfect balance of mobility, protection and firepower, the Italian Zara-class heavy cruisers are considered to be among the best ships of their class at the time of their construction. Soon, the lead ship of the class - Zara - will reinforce the top rank of the recently introduced Regia Marina in the upcoming War Thunder major update!

Briefly: Successor to the Trento-class, the Zara-class of Italian heavy cruisers offers stronger protection and equally formidable firepower at the expense of mobility.

While the Trento-class cruisers were being laid down, more and more voices within the ranks of the Regia Marina raised concerns regarding the Trento class’ overly lightweight protection, questioning their effectiveness in combat. As a result, naval command issued an order to Italian shipbuilders to come up with a more balanced design, while adhering to the 10,000 ton displacement limit imposed by the Washington Naval Treaty.

It didn’t take long for the shipbuilders to come to the conclusion that matching the navy’s requirements with treaty restrictions was an impossible task. As a result, the Regia Marina altered its requirements slightly while simultaneously granting its shipbuilders permission to exceed limitations if it meant the construction of a capable warship. Thus, the Zara-class heavy cruisers came into being, featuring vastly improved protection over the Trentos, equal firepower and at the cost of only slightly reduced mobility.

The lead ship of the class, Zara, was laid down in July 1929. All four ships of the class saw completion by late 1932 and subsequently entered service with the Italian Navy. In the interwar period, Zara-class cruisers took part in naval exercises and several fleet reviews, held for foreign leaders. During the Spanish Civil War, Zara-class cruisers participated in non-intervention patrols and evacuations of Italian nationals from the region.

In the leadup toward the outbreak of WWII, Zara, Gorizia and Pola supported the Italian invasion of Albania in April 1939. In subsequent actions following the outbreak of the war, Zara-class cruisers often clashed with forces of the Royal Navy in Mediterranean, taking part in intense naval engagements.

However, while being fortunate enough to emerge from the Battle of Taranto in November 1940 unscathed, the class’ luck only went so far. As part of an Italian operation to intercept Allied shipping, Zara, Pola and Fiume, along with a host of other Italian warships were engaged by British forces in the Battle of Cape Matapan in late March 1941, which would prove itself as fateful for the class.

During the engagement, all three of the participating Zara-class cruisers were sunk by the British fleet in a night battle, leaving Gorizia as the sole survivor of the class to see the end of the war, albeit heavily damaged while in port at La Spezia. 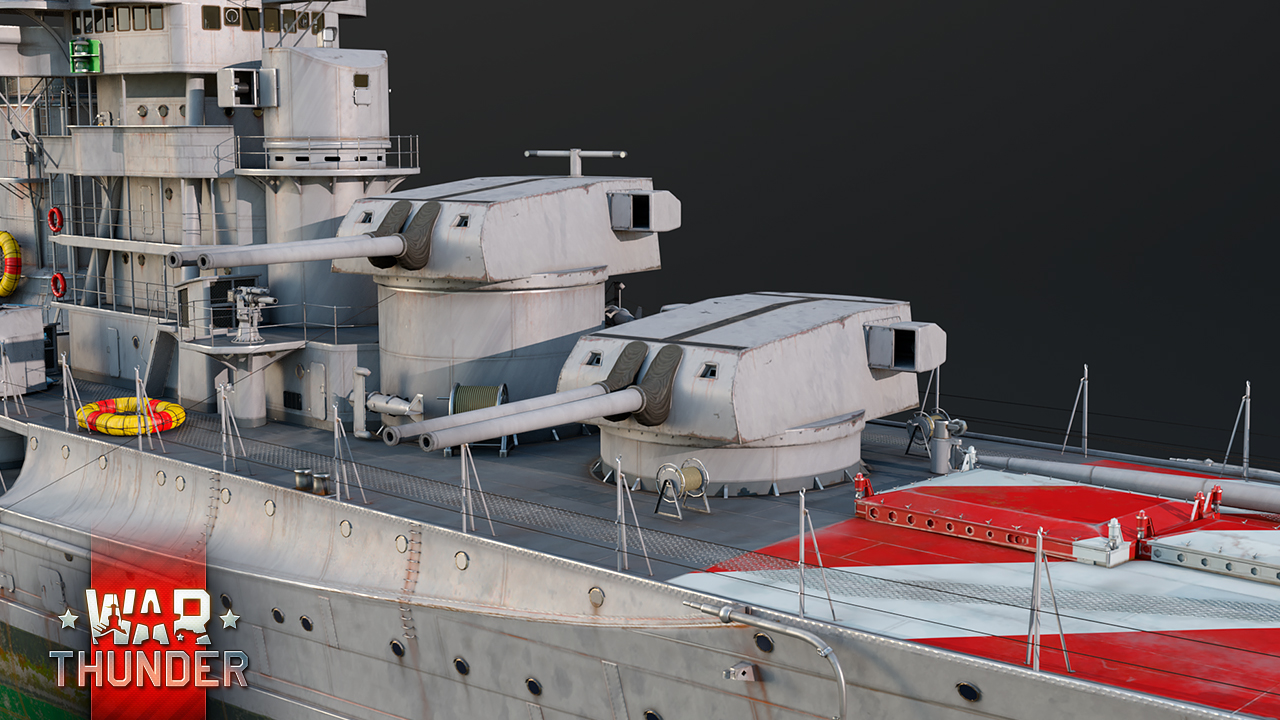 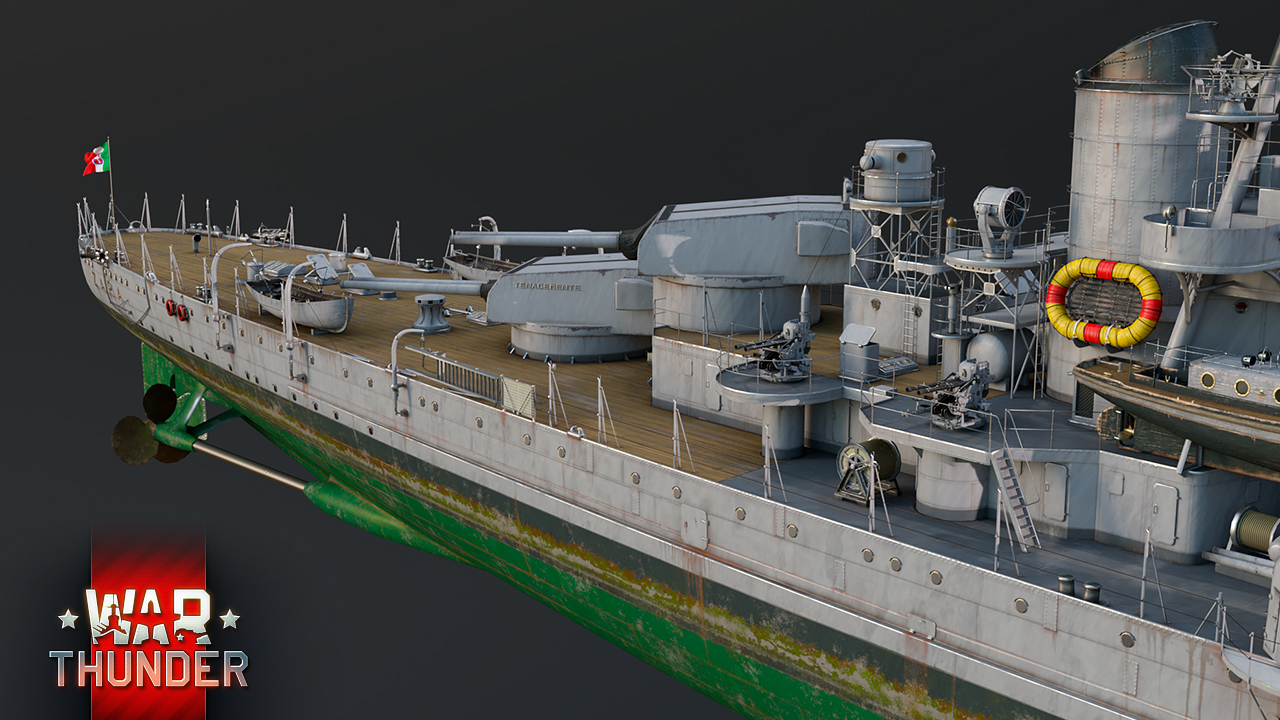 In War Thunder, the Zara-class of Italian heavy cruisers are arriving to the game as part of the upcoming update to reinforce the top rank of the Regia Marina tree, introduced with the previous major update. Subsequently, Italian captains will have the opportunity to take command of the lead ship of the class - Zara herself!

Sharing a great deal of visual resemblance to its predecessor, the similarities between Trento and Zara are most noticeable in the latter’s primary armament. Namely, Zara features an identical loadout of eight 203 mm (8-inch) cannons, split into four twin turrets, resulting in an identical level of firepower at first glance. However, a distinct difference between the two ships is Zara’s ability to fire her guns at a much faster rate - up to 3.8 rounds/min under ideal conditions!

The secondary armament on Zara also remains identical to that found aboard Trento - three double 100 mm dual-purpose turrets to either side of the ship’s superstructure will help deal with aircraft and other vessels at longer ranges. However, Zara is only equipped with four twin 37 mm cannons and another four dual 13,2 mm machine guns comprising its anti-air arsenal. Furthermore, Zara has no access to torpedo launchers, meaning that aspiring captains are well-advised to keep close distance to some of their allies in order to make up for these two deficits.

A key aspect which sets Zara apart from not only its direct predecessor, but indeed all other vessels in the game currently, is the ship’s superb armor protection. Being protected by 150 mm of armor plating along the belt and vital components such as the barbettes and conning tower, Zara will become the most heavily armored warship to appear in War Thunder naval battles after the release of the next major update. As a result, this formidable warship can withstand substantial battle damage, while being virtually impervious to fire even from other cruisers at longer engagement distances!

Naturally, to achieve such excellent protection, but still keep the ship within a reasonable displacement, Italian shipbuilders needed to make some sacrifices when it came to mobility. Therefore, unlike Trento, Zara is fitted with far lighter machinery, with her turbines being able to generate about a third less power output compared to Trento, rated at 95,000 horsepower. As a result, Zara is only able to achieve a more modest top speed of 32 knots (59.2 km/h).

Zara has set course for War Thunder naval battles and is expected to dock in player ports with the release of the upcoming major update. In the meantime, keep your binoculars at hand and be on the lookout for more news as we continue revealing what the next content update has in store for you. Until then, calm seas and happy hunting captains!

Commenting is no longer available for this news
Rules
Dozer15
19

I see, you're a man of taste as well!

CokeSpray, I am hungry for some floating baguettes, maybe next year?

All italian ships (especially the battleships) looked great. But they didn't sink many ships.

[email protected], That was not entirely their fault they were go ships its just the Italian government was useless and also I think that is a good thing they didn't sink a lot

Nice to see big ships are getting some attention, any chance for battlecruisers or EC coming back ?

Right now we don't have anything to share about Battlecruisers, but we did make a development post regarding Naval EC recently https://forum.warthunder.com/index.php?/topic/495266-naval-enduring-confrontation-development-update

Smin1080p, OOOH OHHH!!! my baby! ty guys!!! crongrazt for this amaizing work! , P.D: it is possible ll have the Giuseppe Garibaldi cruiser soon?

Nope. Being protected by 150 mm of armor plating along the belt and vital components such as the barbettes and conning tower, Zara will become the most heavily armored warship to appear in War Thunder naval battles after the release of the next major update.

Bingoguy, it might have the thickest plating but i still thing the hippers turtle back scheme is will be more effective

Seriously nobody even plays ships. Please fix 2nd WW meta and give P-51 A lt/B/C/F

Some of us do. Speak for yourself.

Bingoguy, yeah that's why I get to play with bots instead of players..

As far as the latter is concerned, something along those lines (not necessarily tied to the P-51) is planned. Stay tuned to the news, no doubt you'll be pleasantly surprised.

When the time is ready to Stryke, of course.

CokeSpray, Don't.. Don't give me hope.

Bydaniel857, do you mean someday as the next 3 years?

That's what I've wanted from Regia Marina! Thanks) Can't wait for Naval EC to research this beauty.

More to come, stay tuned! As far as naval EC is concerned, check the naval section on the official forums for one of the latest updates on the subject - it's being worked on right now!

go being retarded somewhere else

KOMINIARZ707, the hero we needed, thank you sir.

this is like, the fifth dovbleg, hold your horses goddamnit. you got atleast 2 weeks left of dovblegs to go.

Reasonable stock grind for high tier vehicles when? Also how about also fixing parts and fpe issue for naval cause I have a feeling getting set on fire after the first salvo hitting your ship, which you cant extinguish, is not any more exciting than grinding those modules stock with half the rp income of the already sad tanks is not really fun. But i guess its just me :)

Huh? What? The equivalent RP of a 5.7 HC in my 3.3 frigate which only gets a destroyer spawn and needs 22k RP for a single module is TOTALLY LEGIT

Just because you don't play it doesn't mean others don't. I play quite a bit of naval although admittedly I stick to smaller than destroyers and think larger ships are boring as hell. But people do still play it.

They will announce them when they announce them, you should just give them time to maybe do a little later tier naval maintenance

I think no. Being protected by 150 mm of armor plating along the belt and vital components such as the barbettes and conning tower, Zara will become the most heavily armored warship to appear in War Thunder naval battles after the release of the next major update.

Bingoguy, Yeah. Certainly implies no BCs for this patch. But hey, be nice to grind out the rest of my cruisers in EC between now and when we get them.

She will sure be a force to be reckoned with in EC as long as we don't get a Cape Matapan EC map... x)