The SOMUA SM is a French experimental tank, developed in the immediate postwar  years as an alternative to the AMX-50 being developed in parallel at the time. Despite it being the AMX which ultimately entered service, this won’t stop the SOMUA SM from joining the ranks of the French ground forces tree in the upcoming War Thunder update!

Briefly: The alternative design to the AMX-50, featuring heavier armor protection at the expense of mobility.

In 1946, at the same time when AMX was given the order to develop what would eventually become the AMX-50 tank, SOMUA was instructed to come up with a competing design that would act as an alternative to the AMX.

Due to both companies being issued identical technical requirements by the French Army and taking much inspiration from the German “King Tiger” at the same time, both designs turned out to be very similar. In fact, SOMUA’s design stood out from AMX’s only in increased mass, coming as a result of heavier protection, and in its more simple running gear.

The SOMUA SM, as it became known, was presented for the first time to army officials in October 1951, albeit without its engine installed. At the same time, prototypes of the AMX-50 had already been tested. By 1953, SOMUA had completed the construction of its SM tank, subsequently conducting trials.

During testing however, several design issues were revealed. Because of this and the fact that the upgunned version of the AMX-50 with a 120mm gun was already available, the decision was made to cancel further work on the project. As a result, the SOMUA SM never left the prototype stage and the only constructed vehicle was  scrapped shortly after the project’s cancellation. 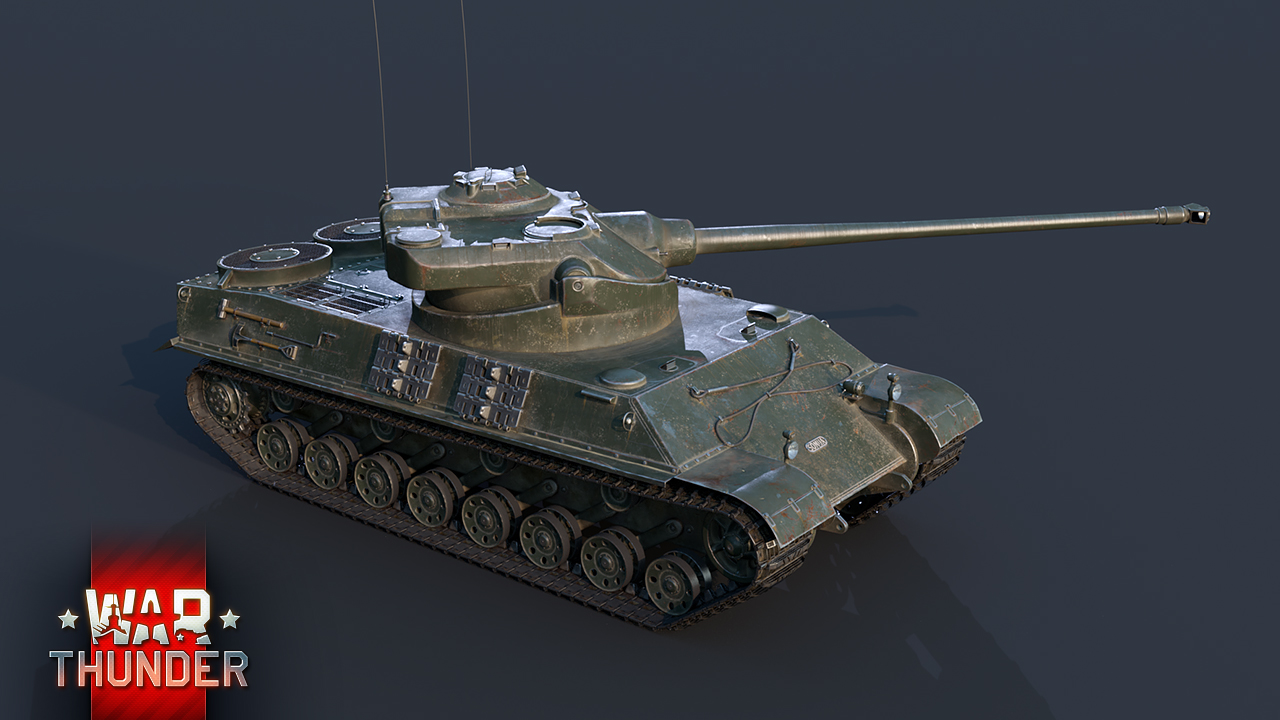 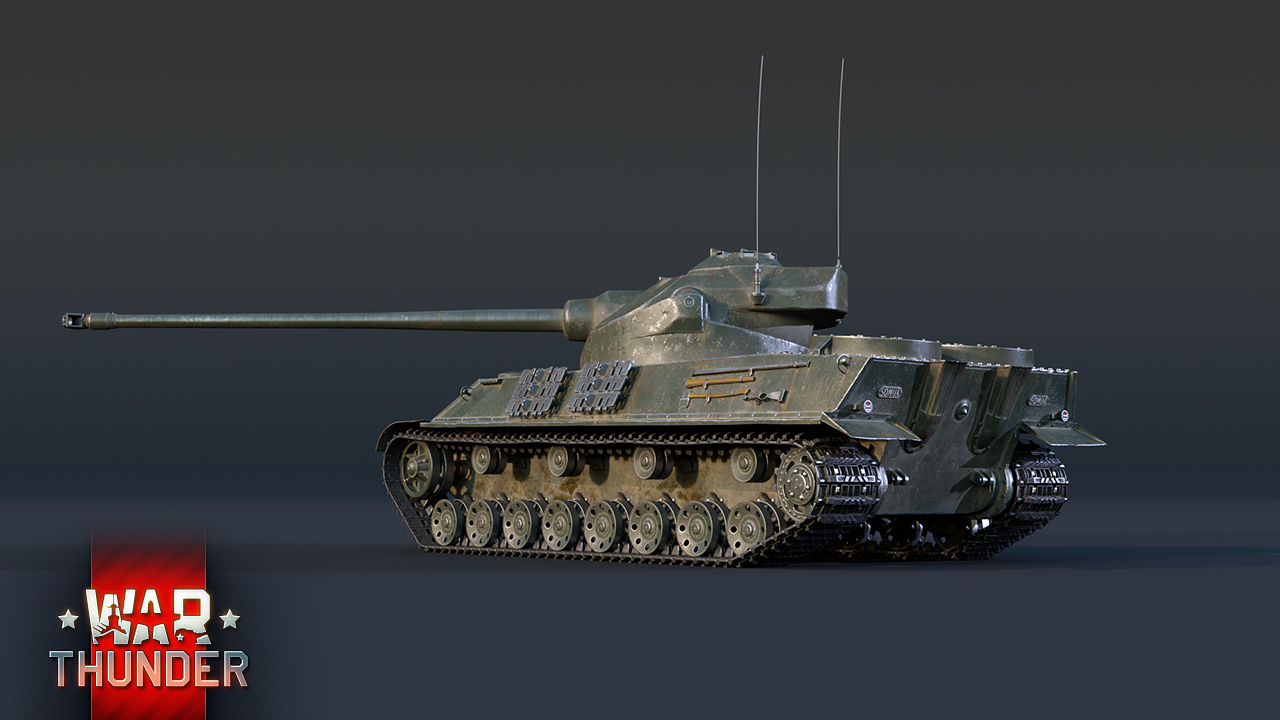 In War Thunder, the SOMUA SM will be a new premium heavy tank awaiting commanders at rank IV of the French ground forces tree, following the release of the upcoming major update. Unlike its close relatives - the AMX-50 and Lorraine 40t - which share a similar general design, the SOMUA SM offers its future commanders a slower, but much more heavily armored platform, carrying the excellent French 100mm cannon.

As already mentioned, the SOMUA SM is fitted with the proven 100mm SA47 anti-tank cannon, present on a number of French machines at rank IV and therefore all too familiar to tankers. Furthermore, the SOMUA SM is also equipped with the same autoloading mechanism as found on the AMX-50, giving it an astonishing reload rate of just 4 seconds!

Although the SOMUA SM offers improved protection while retaining identical levels of firepower as the AMX-50, these improvements do come at the cost of mobility SOMUA SM is fitted with the same 1,000 horsepower engine as the AMX-50, but its mass increased to 60 tons, the vehicle’s mobility decreased as a result. As such, the SOMUA SM can only reach a top speed of 40 km/h under ideal conditions, while its modest power-to-weight ratio of 16.6 hp/t will further limit its mobility in off road conditions.

The SOMUA SM will be obtainable through the purchase of a special bundle in our online store, arriving in the hangars of its prospective owners with the release of the next major update. In the meantime, make sure to stay tuned to the news in order not to miss out on the latest information concerning the next major update coming to the game. Until then, happy hunting tankers!

Commenting is no longer available for this news
Rules
Ocastia
129

yea so why exactly should i buy this after you spat in my face by removing stock sabots from all top MBT's? it was bad enoug before, but you just decided to make it worse whitout ever asking if the Playerbase wants it.

Calm down. The 'Playerbase' don't own War Thunder, Gaijin does so you either don't play WT or accept the changes Gaijin have made to their IP and move on. Its a F2P game, you don't have to pay a penny to play WT so perhaps give Gaijin some credit for that. As others have said, stop whining about irrelevant things and grow up.

mrbeast85, Or I just keep playing the bits that I like. I already gave up on high tier tanks before NVD got implemented, I don't really go above 6.7 with tanks nowadas. And I play mostly planes. Also I used to spend quite some money on WT, but since they currently don't offer anything new I'd like to play the only thing I still spend money on is premium time.

Get some skill and you can play just fine. Stop whining about irrelevant things on a devblog. Noone likes people like you. Look at the Dozer guy.

Haha you're so funny, you know if you would want to play French top tier you would start with HEAT-FS in stock? Because all French tanks started like this before last update mate. French tanks bot buffer with APDS-FS on I tier of modifications just so u know... But yeah, critize it even when it helped France ;)

Andou_BCFreedom, Except it didn't. No french tank have APFSDS as first tier modification. AMX-10 and AMX-30's get it as second tier, while AMX-32 and AMX-40 still have to go all the way to tier 4 mods with HEAT-FS. French tanks are still just as screwed as they were before.

If you buy this. Then why not buy to unlock APDS-FS? If you aren't willing to spend any money then I highly doubt you are doing much high tier playing anyways.

Cool, can you please let us know when we can have stock APFSDS back?

Stubborn and arrogant as they are, they won't make them come back for the sake of pride and control. Look how they already tweaked the shell ecomoy to attempt to calm players down after spitting on them. " Look we know we f*cked you, here's the lube now ". They simply won't admit they are wrong but instead will wait for the playerbase to get used to it and spend GE on mods which were free.

Will it have stock HEATFS ?

Conte_Baracca, it could always be worse, it ain't stock he lmao.

It's premium, it doesn't matter what it has as stock when everything is unlocked on prem vehicles, lol.

That’s sad, especially since amx-50 is moderately good at its br

I think its funny its an up armored hull with a weakly protected turret. Last time I checked, its not possible to only expose your hull and kill things.

Only cheap vehicle to repair in the French TT ....

Yea it's premium or say goodbye to your hard earned silver lion, it really looks like a scam do not encourage gaijin greed!

This tank have a Panther face LOL.

Yes, it is normal, it was inspired by Tiger II