Radio detection had become an important military technology at the beginning of WW2: all parties actively used radars to detect different target types. After the end of the war progress in radio technology and electronics provided even faster development of the onboard radars for aircraft, ground vehicles and vessels.

We have always endeavoured to implement vehicles in our game with maximum accuracy, and that’s why when we introduced more modern vehicles we understood that this technology should also be implemented.

In real life aircraft progress and its strike capabilities forced the development of the ground-based countermeasures. Adding new vehicles in the game - strike helicopters with long-ranged ATGMs,  air-to-ground missiles for the jet aircraft, as well as increasing speed and bomb load of these aircraft made it necessary to introduce countermeasures that could be used by ground vehicles to meet new threats.

After the end of the war airborne radars became an important component of combat air force, which actually defined the efficiency of the warfare system as a whole - and we could not ignore that.

In War Thunder update 1.87 "Locked on!" we will introduce new game mechanics - a sensor system, that will consist of means for radio detection and target lockon, as well as means for finding firing solution for airborne armament. Radar stations in War Thunder are implemented with high accuracy, taking into account all technical and physical capabilities of the real vehicles, plus they will be easy to use in the game.

For the ground vehicles radar stations may consist of several elements:

Some vehicles in the game have less complicated systems, thus American М163 SPAA only has a simple rangefinder. Such a vehicle will not be able to radio detect targets but will be able to lock on visible target and receive an accurate lead marker. 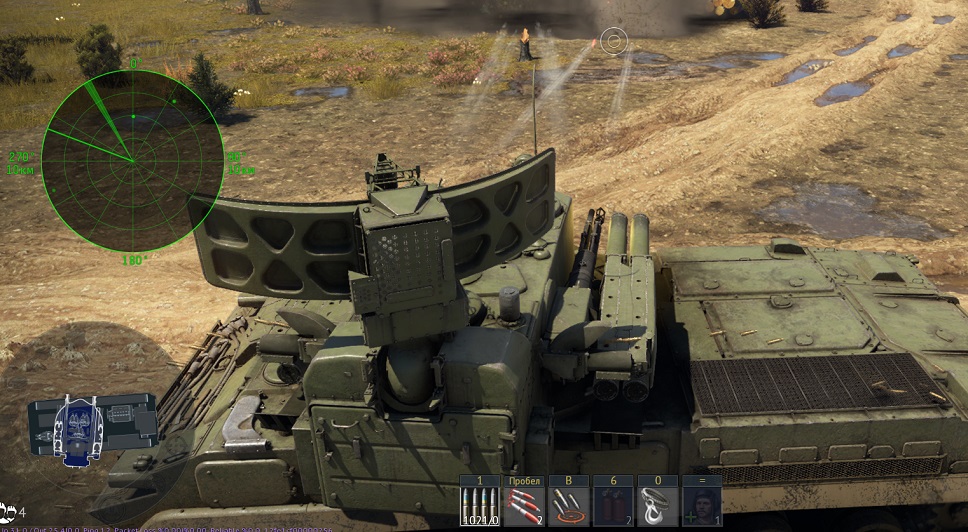 As for aircraft radars, at the moment planes are equipped with stations of a simple design with less capabilities, however they also allow to increase pilot’s field of view, adding instrumental detection to visual.  And unlike stations for ground vehicles airborne radars provide detection in a specific sector and players will have an opportunity to choose different detection modes, for example, narrow this sector in order to increase detection speed.

Some airborne radars after locking on target also provide lead impact point for the airborne armament.

For the self-propelled anti-aircraft guns and aircraft equipped with radar stations we also redesigned the lead markers in order to increase the effective range of fire. As in the real firing control systems on self-propelled anti-aircraft guns new calculation method use more different parameters to calculate the point where the shell will meet the target which allow unleash the full potential of artillery weaponry. So for self-propelled anti-aircraft guns with radar station and automatic 30-40mm canons the effective range of fire on captured target can be up to 4,000 meters in the case if the target isn’t moving. And for large calibre artillery systems, like OTOMATIC by using of the shells with radio fuses it is possible to destroy targets on the distances up to 5,000-6,000 meters.

In reality, the use of a radiating radar can disguise air defense vehicles if on the board of the aircraft or helicopter is installed the equipment which allow to detect the radiation of enemy radars and in some more advanced systems to receive a direction of the radiation source. This part of the “electronic warfare” we also reflected in our game. The target which is irradiated by your radar will receive a special warning and will be able to take countermeasures - for example to use maneuver or hide behind the landshaft parts for an unexpected attack. In turn, the self-propelled anti-aircraft guns will be able to disable the radars if they wish (the antenna can be folded into a hiking position) and turn them on if necessary depending on the tactical situation.

We believe that these capabilities will improve the balance between air and ground forces, as well as it will make the gameplay on radar-equipped vehicles more interesting.

We have implemented the following features of the real radar stations:

In the War Thunder update 1.87 those self-propelled anti-aircraft guns will receive the the new detection and guidance systems which have radar as part of the weapon complex were present in reality, as well as a number of aircraft:

In the future, we will also work on the implementation of the ship's radar stations.

Commenting is no longer available for this news
Rules
ShimakazeChan
55

This update is getting epic!

RobyVan, Do you mean Battlefield 3? ;) together with Battlefield Bad Company 2 are my best loved nostalgic games!

WAIT, is that tunguska on the picture?? :o

Right now our main focus is the implementation of radar systems for tracking air targets (which is necessary top tier addition at the moment). The aircraft you have mentioned has system for tracking ground targets (Naval targets to be more specific). We might be adding these systems later on. EDIT: I stand corrected, I've mixed up the aircraft. Anyway, if there is an aircraft with a system that allows and was designed for air target tracking (and is not on the list), we will add it eventually as well.

Thulle_, Any plans on adding search radar capability to night fighters if they should find themselves on night maps?

SoloWing_Makarov, thats cause the soup saber hd no target radar

How about night fighters like P-61 Black Widow, it had radar in its nose so it can "see" in complete darkness

P-61 was the first pure bred night fighter, can't wait till I can night fight in it :D.

They will probably add it later I think

Hang on where's the Beaufighters radar. That was one of the main reasons it was such as successful fighter

Those are the first vehicles, the devs may add it on other planes later on.

Ouiche, Is this the definitive list of WW2 planes receiving target detection radar with 1.87 or will it be expanded before the patch and this is only reflection of the current development status of 1.87?

The Beaufighters in-game do not have radar equipment installed. That why. First, new Beaufighter variants need to be added, like the NF.VIf. The Dorniers and the Heinkel have those radar aerials already modelled.

Ok now this is epic! It will bring not only balance in both ways, but also more realism. Yay!

I’m sorry have to flown helis yet and been at your span being shot down. This is not valences yet because of the maps we need aaa to be nerfed down with range limitations so we can fly over them and be like just outside there reach

I’m sorry have to flown helis yet and been at your span being shot down. This is not valences yet because of the maps we need aaa to be nerfed down with range limitations so we can fly over them and be like just outside there reach

LtCol_EthanL, This is an interesting point. In my experience, helicopters get smashed by AA as is. Based on what I'm reading, this still seems to be the case. Gaijin team, any input in this regards, as well as ECMs where applicable?

Good stuff Gaijin! This has me more excited than the new vehicles coming this patch!