In the mid-60s, the Japanese Military Administration made the decision to boost their Self-Defense Forces’ power with a mobile MLRS on a tracked chassis. As a base, it was suggested that the promising tracked armoured personnel carrier, that was at the time being developed by the Mitsubishi company, be used. The military vehicle was subsequently put into service under the designation Type 73 APC and became a base for a whole series of assault and support vehicles of the Japanese army. In order to equip their army with a modern multiple rocket launcher system, the Japanese used an APC as a base to develop the brand new Type 75 MLRS, as well as two other support vehicles – a mobile weather station and a command vehicle – to ensure the launcher’s combat readiness. The Type 75 was put into service in 1975 and built up serially to 1985 inclusive. The vehicle fired at its opponents using its 130 mm rockets located on 30 launching tubes inside a rotating pod (the horizontal guidance angle was 50 degrees). The Type 75 had a three-man crew and could reach a speed of 50 km/h. 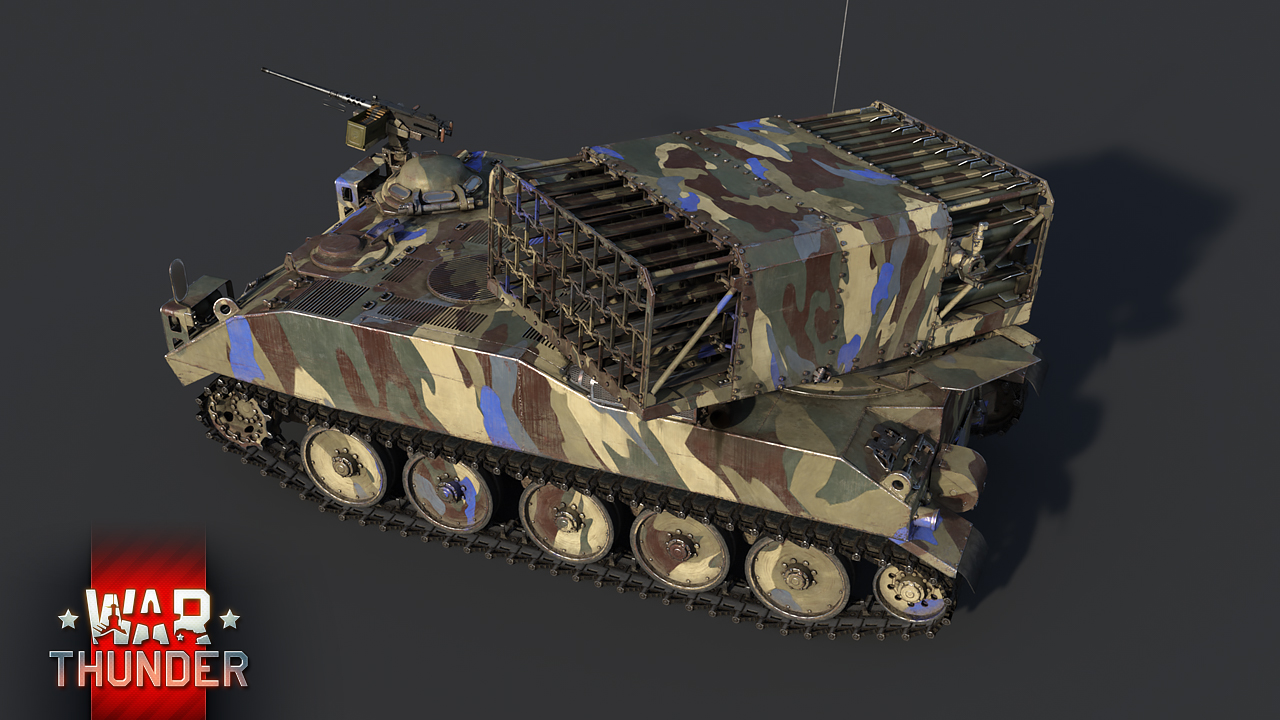 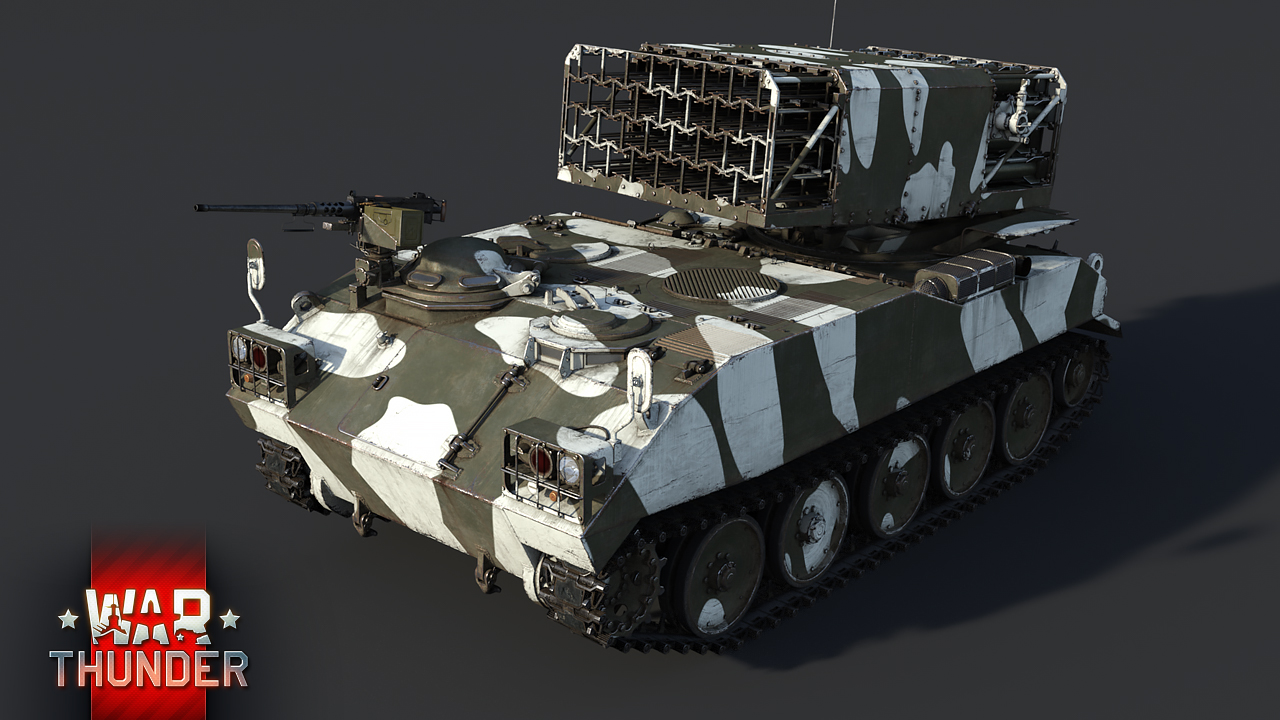 In our game, this MLRS will be a premium support vehicle in high-rank combined battles. Such an unusual addition to medium and main battle tanks will provide new, interesting combat opportunities for the Japanese tankers. Each one of the 30 rockets in case of a direct hit deals significant, and often fatal damage to the majority of ground targets. Light vehicles fitted with bulletproof armour will literally “pop,” while the best-armoured tanks will also suffer some serious damage – amazing, right? Just make sure you hit those targets. However, there are a number of factors you have to consider before deciding to take the Type 75 into your next battle. The rocket pod cannot fully rotate horizontally, meaning that any leftward or rightward angle over 25 degrees can only be achieved by rotating the hull. Furthermore, it’s impossible to achieve a negative angle when aiming vertically – we recommend practicing with the Soviet Katyusha in order to learn to use uneven terrain surfaces to reach the desired negative tilt angles.

The vehicle itself might be quite mobile, but it has weak armour – the aluminum alloy widely used at the time is only strong enough to resist machine gun fire and small shrapnel. Basically, it’s never a good idea to rush ahead of your whole squad right into the enemy line of fire. The premium status of this MLRS will not only let you earn decent rewards, but it will also significantly speed up the research process of any vehicle of the Japanese tech tree at the same or lower rank.

The Type 75 is a truly unpredictable vehicle for high-rank battles. It will definitely please its owner and cause quite a lot of trouble for their opponents. Players will be able to give the new vehicle a go with the release of the new update 1.83 titled “Masters of the Sea”! We will see you there!

Those that purchase the Type 75 MLRS, from the 23rd of October until 13:00 GMT on the 6th of November, will also receive the Emblem of the 2nd Combined Brigade JGSDF.

Commenting is no longer available for this news
Rules
sirmortimer
23

"we recommend practicing with the Soviet Katyusha"...Yeah, because everyone has access to it /s. It was only available during the 2017 VE-Day event, hasn't been available ever since and is not up for purchase on the market either. Only a small fraction of the playerbase has it because the challenge was quite hard.

Just an FYI, from memory what denotes a Katyusha is the launcher system, not the vehicle. The GE Premium BM-8-24 is a "Katyusha". I also think the one Pr. 1124 is also one or has a prefix to it but I do not know that for certain.

i aggre on no repeat of event part ,but hard? i didn it in 1 game, you just needed 5 kils with rus rocket tank and cinse every1 was using it it was very easy

*RatnyciosDievas, The BM-8 Wasn't Easy To Get 5 Kills With. But Everyone Was Whining So They Made It Easier For Having Any Vehicle In Your Line-Up Getting 5 Kills.

Matilda hedgehog would be cool...https://en.wikipedia.org/wiki/Matilda_II#Variants

DodgerRoger, Instead of fighting MBTs with lighter armor it's going to be fighting the last of the conventional tanks which almost all have more than enough armor to negate any kind of HE damage this thing could do.

Another slap in the face for the japanese players. Why dont you add type 74 variants for premium? This is going to end like the type 60 atm

We currently don't have enough information to work on more type 74 variants. If/when more becomes available more may be considered. However this machine has actually been a popular suggestion since the Japanese CBT. Whilst it may not be to your taste, others do want this machine.

Smin1080p, Dude, what about the Mitsubishi Type 89 IFV (with missiles), the type 74, and the type 75. These would all be viable options for Japan.

Dude this thing is badass and works great. The only problem is how annoying it is that MLRS cost so many GEs for some dumb reason. THAT is the only issue with this vehicle. This thing is a slam dunk, must have.

After the buffs this thing is shaping up to be a phenomenal meme. 700m/s rockets, only 150m/s slower than the T-64's shell and with more HE filler, like 80 degrees of elevation, can spam rockets and respectable pen. People can kill Abrams' with the Panzerwerfer 42, and this is better in every way. Just wish it was cheaper and the BR was lower.

High quality memes are the way to go, so the Type 75 will be an excellent choice!

Why did you nerf aircraft SL earnings? The F2 Sabre used to have 555% reward, now it has 375% reward. And then you don't announce it, like what even!?

Another reddit zombie? They did announce it and it has been a couple of months since then. They changed SL gain on every single plane depending on how much it got on average. Now it's a silent ninja change for a lot of people because they didn't pay attention but some random dude on reddit just found out....

Markus752, Do you have a link to their announcement? If you have the link/evidence, I'll delete this comment.

Smin1080p, @Smin1080p Why is the camera so darn close in on this thing? That puts me off buying it

Think we will see the patch around mid week next week :)

You mean like WoT arty? No thanks man, we don't want/need that bs here.

LandKreuzer_89, I'd rather have WoT's IDF system than no IDF system. If WT wants to be as "realistic" as it claims, then the "King of the Battle" needs to start getting some representation. A dedicated IDF system will give MLRS more use (and help justify their massive price tag) AND that will open up the doors for SPARTY to start getting added to the game. So honestly, I think you are insane to say "we" dont want a dedicated IDF aiming system. IDF fleshes out a crucial part of the game thats missing.