Briefly: A British WW2-era gunboat, designed specifically to combat German S-Boats with the use of overwhelming firepower.

In 1940, the Admiralty issued a set of requirements for a new gunboat design that would incorporate features from both motor torpedo boats and gunboats. The primary task of this new vessel would be to counter the German S-boat threat and to protect the British coastline in areas where larger vessels, such as destroyers, couldn’t operate.

With WW2 already in full swing, the need for this kind of vessel was considered high and an emphasis was put on ease of mass-production, in order to manufacture as many ships as quickly as possible.

The Denny company was tasked with designing a vessel around the Admiralty's specifications. They armed the vessel, similar in design to the contemporary Fairmiles, with cannons, machine guns and torpedo tubes, decided to construct it from steel so as to make it fit for mass-production, but soon ran into a serious problem.

The conventional power supply of the time came from either petrol or diesel engines, neither of which was readily available in wartime Britain. Thus, the decision was made to outfit the new vessel with two steam turbines, producing 4,000 horsepower each.

The Admiralty approved the design and ordered an initial nine vessels to be produced, whilst a total of sixty were planned. However, these plans were soon dropped and out of the nine vessels that were laid down, seven actually saw completion.

Nonetheless, the seven ships that did come out of the shipyards proved themselves in combat, despite some endurance and efficiency problems presented by the steam propulsion system. Thanks to their heavy armament, they quickly gained respect from German S-boat captains, who often tried to avoid encountering an SGB.

Only a single SGB was lost in combat during WW2, with the majority serving into the Cold War before being decommissioned from service. 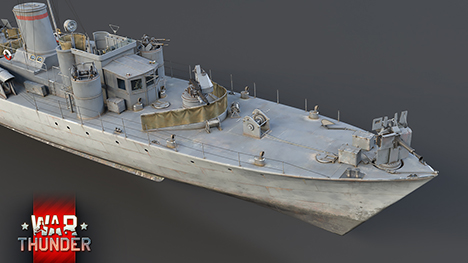 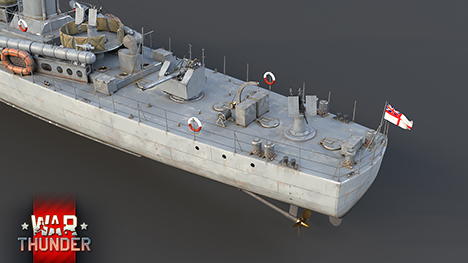 In War Thunder, the Steam Gun Boat version SGB 304 Gray Fox can be obtained via regular research as a rank II gunboat of the British naval research tree. As opposed to similar vessels of this rank, the SGB presents its commanders with a good balance between firepower and mobility.

Despite the fact that the steam propulsion system on the SGB is bound to raise an eyebrow with some players, don’t be fooled by this outdated technology into thinking that you’ll be commanding a slow 19th century steamer. In fact, the opposite couldn’t be more true! Two 4,000 horsepower steam turbines generate enough power to allow the SGB to cut through the waves at a respectable top speed of 35 knots (65 km/h), making it comparable in speed to some other vessels at its rank.

However, whilst mobility is certainly not to be underestimated on the SGB, underestimating its firepower will quickly prove itself as a much bigger mistake. As a matter of fact, the SGB is one of the most heavily armed gunboats in War Thunder. Equipped with a single 3-inch (76.2mm) cannon, two automatic 40mm cannons, two 20mm Oerlikon cannons, two dual Vickers heavy machine gun turrets and on top of all that, even one 21-inch (533mm) torpedo tube on each side of the hull.

Truly, the entire deck of the SGB is blistering with guns. As such, captains of this fearsome war machine can easily engage any opponent at their rank!

However, a noteworthy weakness of the SGB lies within its armour protection. Although the entire ship’s hull is made from steel, armour plating was added only after the ship’s first combat actions proved it to be susceptible to damage, especially with damage to its steam boilers. To address this, armoured plates of 18-19mm thickness were added to the hull in order to reduce the likelihood of critical components getting severely damaged from falling bullets and fragments.

Overall, the SGB is very much a force to be reckoned with on the ocean battlefields and should under no circumstances be underestimated. Its combination of respectable firepower and good mobility will make it a true death-bringer in War Thunder naval battles!