The Flower-class is a British WW2-era corvette, designed specifically to escort Atlantic convoys and protect them from German U-boats. HMCS Brantford, a Canadian Flower-class corvette, will soon be available in the game as part of the CBT of the Royal naval forces!

Briefly: A British corvette of the lower ranks, featuring respectable firepower for its tier, but lackluster performance where mobility is concerned.

Just prior to WW2, it became apparent that German U-boats would present a serious threat to British transatlantic shipping in the event of an outbreak of hostilities. Realizing this, it became clear to the Royal Navy that they needed a large number of new small vessels that could cope with this threat, whilst being cheap, simple and quick to produce, without hindering the construction of larger warships.

In response to the demand, the Smiths Dock Company proposed a modified version of one of their 700-ton whale catchers. The proposed ship virtually met all Royal Navy requirements and could even be built by smaller shipyards across the country, meaning that a large-scale production wouldn’t affect the construction of larger warships. The proposed design was accepted and the first orders for Flower-class corvettes came in as early as July 1939.

Although initially only intended to operate along the British coast line, the large range and robust seaworthiness of the Flower-class corvettes soon saw ships of this class escorting Atlantic convoys to and from Great Britain. Their primary role was to fend off submarines, which is why ships of this class were relatively lightly armed and often specialized in anti-submarine warfare.

Apart from Great Britain, Flower-class corvettes were used extensively in various different roles by numerous other nations during WW2, including the United States, France, Canada, Greece, the Netherlands and many more. Ships of this class served right up until the end of WW2, even when more advanced designs began to replace them.

Whilst Spitfires and Hurricanes kept the Luftwaffe out of British skies, the venerable Flower-class corvettes ensured that vital supplies reached Great Britain, by fighting off the German submarine wolf-packs throughout the war. With over 260 ships built, the Flower-class corvette remains one of Britain’s most mass-produced wartime ship type, whose contribution to the war effort is highly obvious. 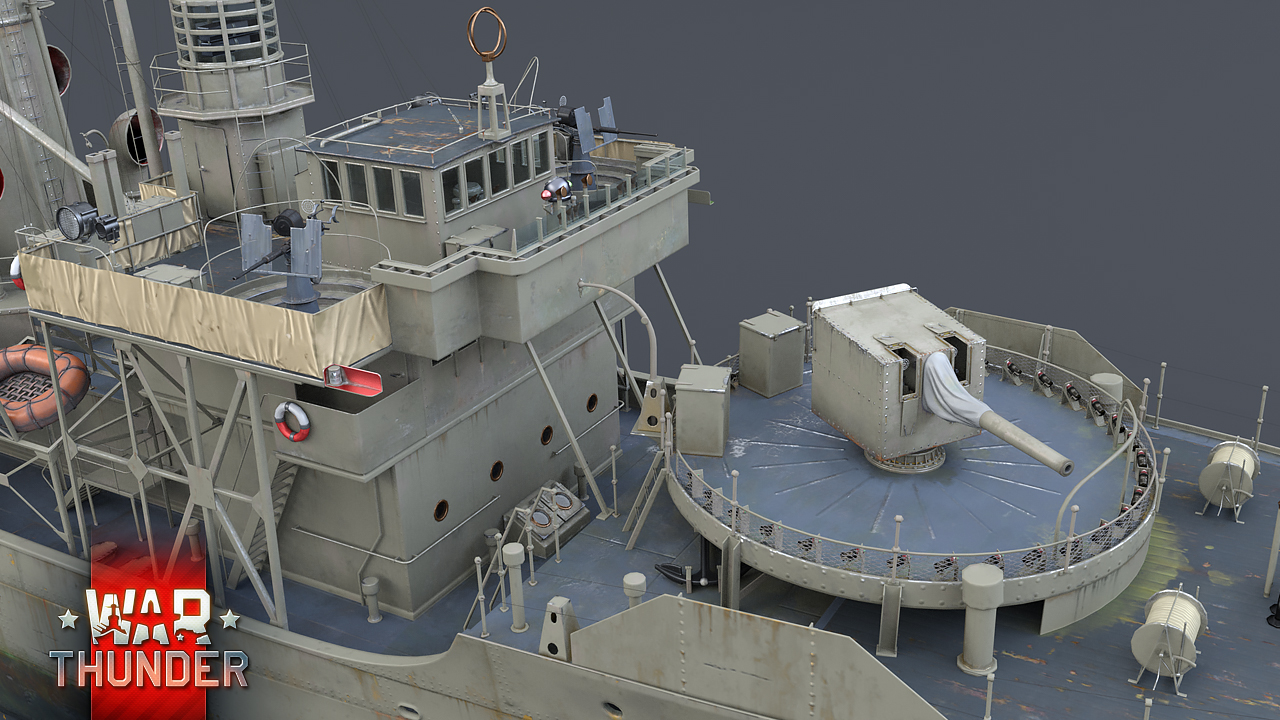 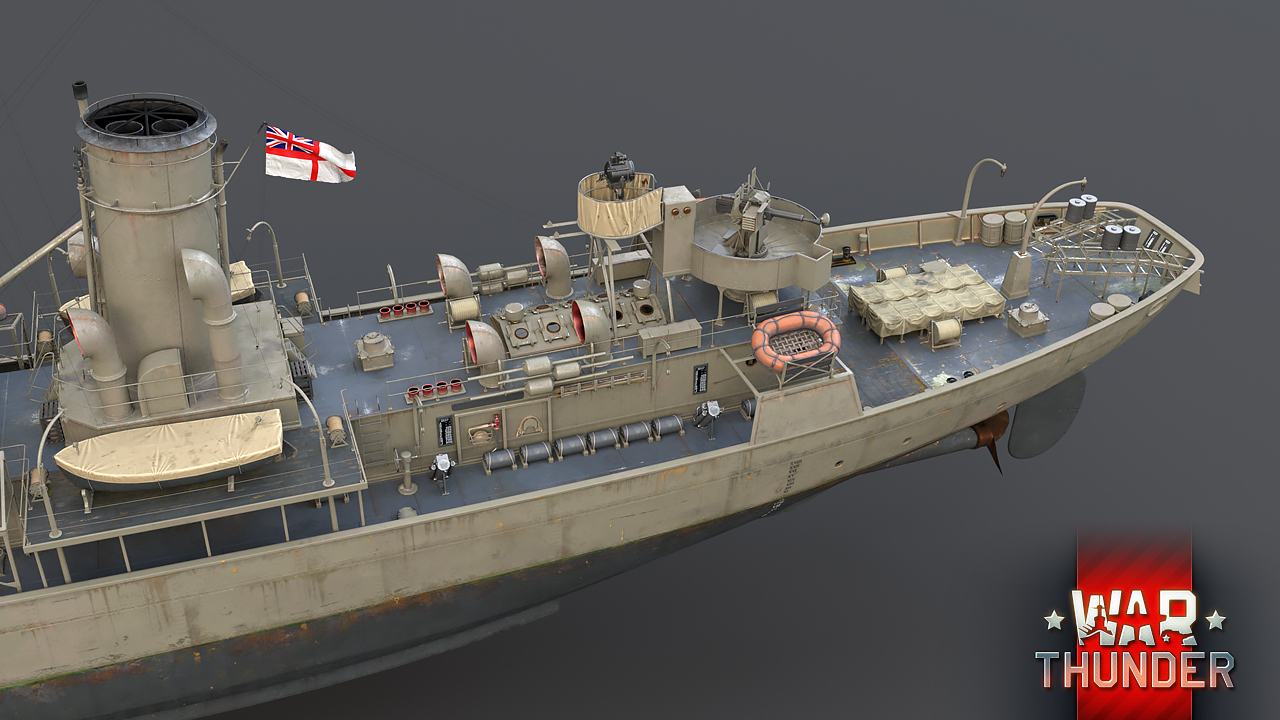 In War Thunder, the Flower-class corvette will be represented in the game by the Canadian-built HMCS Brantford, which entered service with the RCN in May 1942. Comparable to some similar ships found at the starting ranks, HMCS Brantford features good firepower and survivability, but lacks in terms of speed and mobility due to the ship’s large size and relatively lackluster engine performance.

As the Flower-class corvettes were primarily intended to combat submarines, their deck-mounted armament was kept relatively light. Consisting of a single 4-inch (102mm) cannon on the bow, forming the primary armament, as well as a single 40mm and two single 20mm automatic cannons forming the anti-air armament, HMCS Brantford is reasonably well-equipped to deal with hostile surface targets.

However, as most of the time commanders of this vessel will likely focus all of their limited firepower on a single target, they need to stay wary of the battle unfolding around them and remain vigilant at all times. Opponents will likely take advantage of the Brantford’s low top speed (16 knots; 30 km/h) and decreased reaction ability in order to outmaneuver it and get into an advantageous position.

Fun Fact: Although primarily used by allied nations, Flower-class corvettes were also used by the Kriegsmarine after four were captured in the wake of the German occupation of France.

Torpedo boats in particular will strive to approach the Brantford unnoticed in order to fire off their torpedoes on the unsuspecting victim for an easy kill. Besides torpedoes, HMCS Brantford is also very susceptible to air attacks, especially if all her guns are already being used to combat surface targets. To counter this, it’s highly recommended to stick close to your allies whenever possible and avoid going off on “lone-wolf” adventures. This way, you’ll always have friendly guns backing you up and, according to Murphy’s laws of combat, the enemy will also have something else to shoot at.

Despite your best efforts to avoid getting singled out by enemy warships, it’s still bound to happen in certain situations. In those cases, you can always expect your ship to suffer all kinds of damage. Luckily, the HMCS Brantford is a relatively large ship for her rank, with a crew complement of 85 sailors. This gives the ship a respectable combat endurance and ability to virtually “tank” damage, whilst still remaining afloat and operational.

Make sure to give the Flower-class corvette a try as you work your way up the ranks of the Royal Navy in the closed beta testing! Smooth seas until then, captains!

Try and watch this movie re Flower class Corvettes https://www.imdb.com/title/tt0045659/ - one of the best sea stories from ww2 above surface.

its a great flick and a better book but now you mention the film we need the castle class too :P, now i come to think of it lets have a river class its a good match for the F boots of the germans ;)

Will we see the Väinämöinen ship to be a german premium ship? it is a finnish ship

Why as a premium? Just support an axis tree or a regular axis-line for the italians?!

Does it come with the HMCS Sackville K181 camo as its the last remaining Flower-class corvette?

Strange that they didn't choose the Sackville, since they chose to recreate HMCS Haida as the last remaining Tribal-class.

flower class, such a scary name

And it get worst if you look at some of the ships names :D (Snowberry, Buttercup, Bluebell...)

Ouiche. Several of the flower class (and related castle class) were named after towns and cities in Canada. HMCS Wetaskiwin, HMCS Brandon, and HMCS Arvida to name a few.

Honest question: Is there any chance we might someday see the Dutch navy in the game? I just want to sail the Hr Ms De Ruyter in the game.

It's too early to say, we still have a lot of work on the main nations.

Ouiche, Thanks for responding, and I don't worry, I'm liking naval so far, so I can wait a while, because we first need the Italians.

Hmm, can I have a "Compass Rose" name decal to go with this ship?