Briefly: A British-built N-class destroyer of the Royal Australian Navy.

HMAS Nepal was laid down in Great Britain in September of 1939, initially under the name of “Norseman”. As one of the last ships of the N-class destroyer type, she was launched in December 1941, but was soon severely damaged while still in the shipyard during a German air raid.

Despite the severe damage, the ship was repaired and renamed to Nepal, in recognition of Nepal’s contribution to the British war effort. After the repairs were completed, the ship was formally commissioned into service with the Royal Australian Navy in May 1942, although still remaining the property of the Royal Navy.

In July 1942, HMAS Nepal was assigned to the British Eastern Fleet and shortly afterwards set out for Kenya. In September, HMAS Nepal was involved in the Madagascar campaign. Before heading to Australia for refits in spring 1943, the ship served as a convoy escort and performed anti-submarine patrols.

After her two-month long refit, HMAS Nepal resumed operations in June 1943, taking part in some major operations in 1944 as a carrier escort. The ship underwent another refit in August 1944, before embarking on some of her final operations.

HMAS Nepal remained active in the Pacific theatre until the end of WW2, until being decommissioned from RNA service in October 1945. The ship was commissioned once more into the Royal Navy shortly after, being ordered to return to Britain.

In the postwar years, HMS Nepal underwent repairs and modifications, briefly serving as a minesweeper and training ship. In the early 1950s, HMS Nepal was part of the reserve and awaiting some proposed upgrades. However, those upgrades were eventually cancelled and the decision was made to scrap the ship. January 1956 marked the end of HMS Nepal’s 14-year service life as she was sold off for scraps to the British Iron & Steel Corporation. 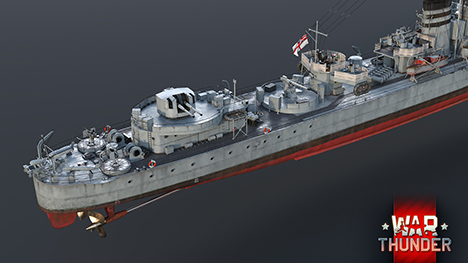 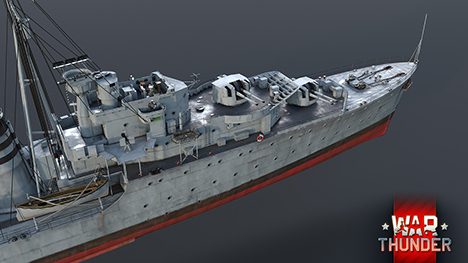 In War Thunder, HMAS Nepal will be available in the RN closed naval test as a destroyer of rank III in the Royal Navy research tree. Compared to the Tribal-class, N-class destroyers can be considered as smaller, lighter and slightly faster versions of the Tribal.

Although visually very similar to the Tribal, HMAS Nepal is a slightly smaller and lighter ship in comparison. This change comes mainly as a result of N-class destroyers having a two boiler room layout, as opposed to the Tribal’s 3 room layout. This change allows for only a single funnel to be installed, resulting in fewer obstructions for deck AA guns, giving them better firing angles.

However, while this change does bring with it some benefits to the ship’s  mobility and AA effectiveness, it also comes at a certain cost to survivability. Having a smaller, more concentrated boiler room layout means that a single well-placed salvo can knock out the entire propulsion system in one strike, rendering the ship immobile until the damage can be repaired. Furthermore, Nepal’s crew is also smaller in comparison to that of the Tribal, meaning that the ship isn’t able to cover its losses as well as the Tribal.

Fun Fact: During the German air raid that severely damaged HMAS Nepal (then still known as HMS Norseman), the ship was nearly split in two as a result of a direct bomb hit.

When firepower is concerned, HMAS Nepal is comparable to the Tribal, but does stand out with a few changes. The main armament of both ships remains identical - six 4.7-inch (120mm) cannons spread across three dual turrets, assisted by a single 4-inch (102mm) dual-purpose cannon. The anti-air armament of the Nepal, on the other hand differs from the Tribal, consisting of a single quadruple 40mm cannon and six single 20mm Oerlikon cannons. A further difference is the presence of a quintuple 21-inch (533mm) torpedo launcher, instead of the usual quadruple one.

Overall, HMAS Nepal will be seen as an appealing alternative to the standard Tribal-class destroyer, especially by those captains who prefer a more nimble vessel, but don’t wish to sacrifice too much in the way of firepower. At the same time, HMAS Nepal brings with it a unique set of strengths and weaknesses that need to be mastered in order to get the most out of this warship.

Become a Tester and be sure you try out HMAS Nepal in the closed beta testing of War Thunder Royal Naval forces and bring victory to your team! Smooth seas, captains!