M48A1
30 May 2016 Development
Attention! This news was published on the old version of the website. There may be some problems with news display in specific browser versions. 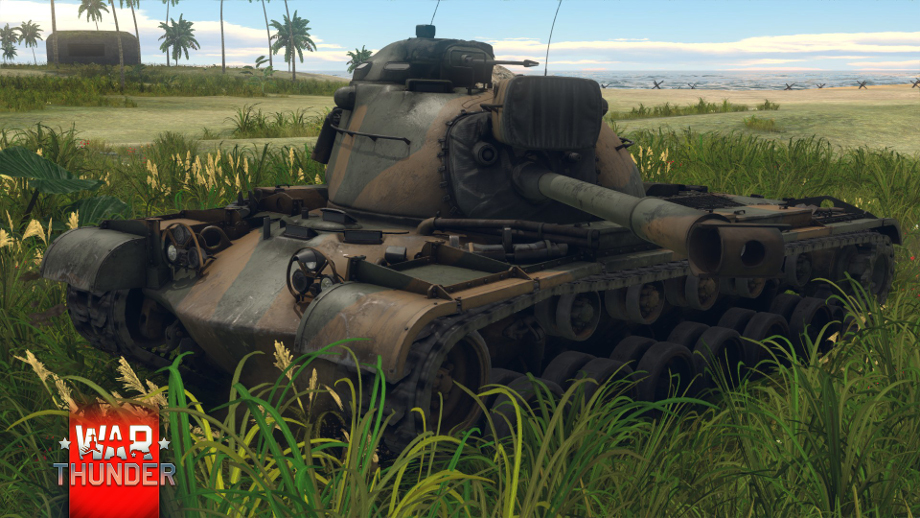 The American M46 Patton and M47 Patton II tanks are greatly respected among players in high-ranked War Thunder battles. These powerful vehicles stand out for their flexibility and utility: their good vertical aiming angles, solid frontal armour and an excellent chassis allow them to adapt for any conditions and complete any task.
Very soon, the list of these wonderful machines will be bolstered by an additional one: the developer team has finished working on the M48A1 Patton III.​

The second Patton model, the M47, was initially designed as an intermediary point in the series, so before even finishing its development, General Motors began to design a new vehicle with an improved 90mm cannon. The project was designated T48, and subsequently became the M48. The prototype was a development of the M46 and M47 ideals; it received a 90mm M41 cannon with an ammunition complement of 60 shots and improved armour. A version with a rotating machine gun turret with large-caliber M2HB received the series designation M48A1.

The first series-produced M48 left the factory in 1952, and were deployed only in 1953. The M48A1 modification was, in short, developed even later. This meant that the Patton III was unable to participate in the Korean War. However, the tank’s service record is rich in other combat episodes: the vehicle was used during the wars and conflicts in Indochina, in the Middle East and in North Africa. It was used in numerous battles from the mid-1960s to the present day. The last M48 was assembled in 1960.

What awaits the M48 in War Thunder? First of all, this tank logically links up the M46 and M47 line with the M60: moving from the Pattons to the top vehicle will be a more fluid process. Secondly, the M48 will strengthen the American side in high-ranked tank and mixed battles, becoming a valued ally in the fight against any opponent from other nations.

The frontal armour plates of the Patton are set at a good angle, which makes the tank more resistant to hits from armour-piercing, APCR and HE shells. Its 90mm cannon has wonderful ballistic characteristics and among all its contemporaries, it is inferior in destructive force only to the Soviet D-10T. Finally, the tank’s maneuverability in combination with its other characteristics allows it to impose its strategy against the opponent and adapt for any situation that emerges during battle.

This fantastic tank will arrive in hangars after the soon-to-come huge update 1.59. Keep an eye on our news!

Commenting is no longer available for this news
Rules
TyphoonCro
8

Can we now expect M46 lowered to 6.7 please? Its just a Pershing with V12 engine... Just that with slightly better cannon... Please?

Yeah, and the M26E1 has a better gun and same armor then the M46 at a lower Br... No point taking out the M46 if you own an M26E1, and they practically don't have any differences in speed.

"moving from the Pattons to the top vehicle will be a more fluid process." I am not only referring to this additions BUT a lot of tanks come out every patch. But still both RP and SL rewards for tank battles are really really low. In a good with a 8.0 tank in RB you get maybe 4000 RP (with premium account) yet you still need 380 000 RP for top vehicles. Also SL costs are with 990k too high for only tank players. The economy needs a serious overhaul otherwise it will be too frustrating

I have literally no issue with SL... By the time I get a new tank researched, I gained 2-3M lions.

Fly some planes. They earn tons of SL

I wonder how long will it take for ze Germans to get any viable endgame tanks to go with ze Leopard, becouse now - its just one tank to go on 7.7

they will probably receive some other variants of "Leo" 1a1 something ... ;)

The Bundeswehr used hundreds of M48s, some upgraded to the Kampfpanzer M48A2GA2 version with the 105 mm L7 cannon - sounds like a viable German line vehicle to me.

Can Germany get the M47 patton II? They used like 1000 of them and they are at br 7.3 at which germany has no tanks, let alone medium tanks

whats the point of this thing ... doesnt america have enough tanks... what about germany?

Lol, don't be ridiculous, Germany is the nation with more tanks and best tanks in the game. The brits are the one that need tanks, then USA. USSR and Germany have more than enough, and are always clubbing the other 2. Guess you're new to the game.

Alvega, germany only has the leopard, tiger2, tiger1 that are kinda playable ...i didnt count the panthers becouse they have broken damage models

ReplayBoy, so you mean the Maus and Jagdtiger are not playable? They are amongst the best tanks in the game.