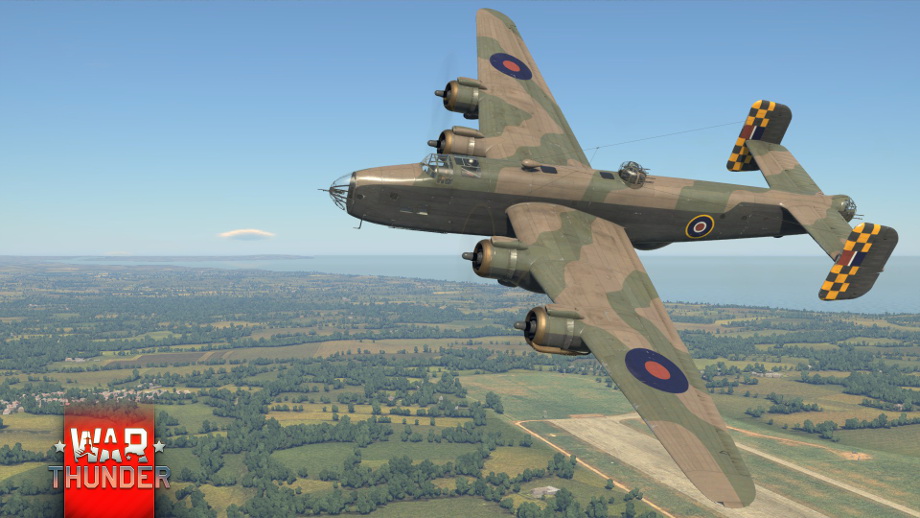 There are all kinds of different War Thunder pilots, and each player has their own preferences in choosing vehicle classes and specific vehicles. In striving to meet the needs of all players, we’re trying to add vehicles of various classes and designs to the game. In update 1.59, one of the most significant serial production vehicles added to the game will be the legendary British four-engine bomber, the Handley Page Halifax B.III. This aircraft served with the Allied air force for almost the entirety of the war and has an impressive service record.​

The design for this bomber began long before the beginning of World War II. The task to develop an aircraft that fulfilled the requirements began back in 1935, when the RAF sought a replacement for the series-produced Armstrong Whitworth A.W.38 Whitley. The new four-engine aircraft had to have a long range and was designed with a view to completing missions during the night. Initially, the maximum wingspan of the aircraft was limited to the traditional 100 ft (30.5 metres); British command placed this requirement on all aircraft of the time, in order to make them easier to transport and store in hangars.

The first-series Halifax aircraft left the factory in 1940 where their first combat took place in 1941, when on the night of March the 10th, six aircraft flew to a port in Le Havre occupied by German troops. The Halifax III, which will be first to appear in our game in update 1.59, is the later and most mass-produced version of the aircraft, having been put into series production in 1943. Some of the key changes in comparison to the earlier versions are the air-cooled Bristol Hercules engine, increased defensive weaponry and improved aerodynamics: the Halifax B.III was cured of a common illness among bombers: poor durability leading to a spin when both engines on one side fail.

The Halifax’s bomb load is impressive: the aircraft can carry almost five tons of varying size bombs on its internal and external bomb mounts. With such a mass of bombs, the aircraft becomes a deciding factor on the battlefield, where victory often depends on the effective and timely destruction of enemy bases. Among the bomber’s weaknesses is its far from outstanding maximum speed – a little more than 280 mph (450 km/h) at a height of roughly 13100 ft (4000 m).

However, in exchange, even at rank II this aircraft has good survivability and powerful defensive weaponry provided by nine 7.7 mm Browning .303 machine guns. Four of them are housed in a rear turret (with an ammunition complement of 6800 shots), another four – in a fuselage turret (2400 shots) and one 7.7 mm Vickers K is mounted on the nose. The sole serious weakness in the aircraft’s defensive weaponry is its lack of lower turrets, which means that the player has to avoid exposing the underside of their aircraft to enemy fire by veering away.

The Handley Page Halifax B.III will arrive in the game with update 1.59. Look out for this bomber in the virtual skies of War Thunder. See you on the battlefield!

Commenting is no longer available for this news
Rules
apemax
12

Been looking forward to this for a while, Now we just need bomber variant of the Mosquito. ;)

BackToTheGround, My Great Grandfather worked for de Havilland and was on the design team for the Mossie, I can't wait for more variants to be released in the game.

I personally love the look of this plane and im going to try and get it but one thing... Have there EVER been any British bombers you could add that have good defensive armament? I mean the Russians are getting the Tu 4 with 23mms! Britain has 95% 7.7mm turrets... Maybe I'm wrong but I wont be surprised to be right. But good work guys, just add something a little more effective next in the British line? You know, something that can fight back?

Like what? The Brits chose night bombing over defensive armament.

There's a few. The best example is the Avro Lincoln, the successor to the Lancaster. It's basically Britain's equivalent to the B29, introduced I think in late 1945? It was armed with 2 50 cals in a tail turret, another 2 in a nose turret and a dorsal turret often armed with twin hispano 20mms (but sometimes just 2 50s). It inherited the Lancaster's bomb bay but had much more powerful engines. There's also the Short Seaford, only a handful were built but they were to be armed with 50s and 20mms.

Lorofish, It had 4x .50 cals in the rear turret on the devserver, so someone screwed up somewhere. Whether it was here or on the devserver that the screw up happened though, I'm not sure

It has quad .50 cal tail turret on the devserver indeed, but it should be corrected to quad .303 cals, because that's how it was armed in reality. Brits didn't have any quad .50 cal turrets. However mk22/24 Spits have wrong cannons since their implementation 2 years ago so I doubt that it will be fixed soon.