The T54E1 is a prototype design of an improved version of the M48 Patton, incorporating an oscillating turret and improved firepower. This highly requested piece of American experimental tech will be joining the ranks of the U.S. ground forces tree with the release of the upcoming update 1.81 “The Valkyries”!

Briefly: An experimental upgraded version of the M48 Patton, equipped with an oscillating turret, a modified 105mm gun and an autoloading mechanism.

No sooner than the M48 Patton began being issued to armored units, American engineers already started working on potential improvements to its design. In particular, engineers focused on upgrading the vehicle’s firepower. This in turn, lead to the creation of the T54, a new vehicle based on the M48’s chassis.

Initially, two versions of prototypes were planned, but a lighter and cheaper third one was proposed in 1952. All three versions of the T54 were armed with a modified version of the T5 105mm gun, but featured different turrets and gun loading methods. The T54E1 was the second prototype, equipped with an oscillating turret similar to the ones found on contemporary French tanks, and a drum-fed autoloading mechanism with a capacity of 9 rounds.

By 1957, all three prototype versions had undergone comprehensive testing at Fort Knox and the Aberdeen proving grounds. However, as the interest of the Army shifted towards the more promising T95 project, the decision was made to cancel the T54 project in 1957. A total of less than a dozen T54s were constructed, of which two were T54E1s. 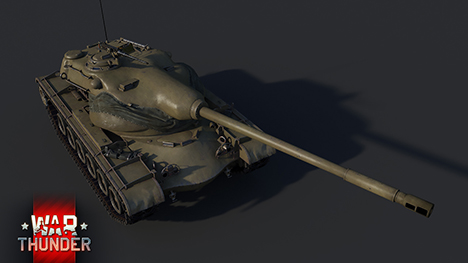 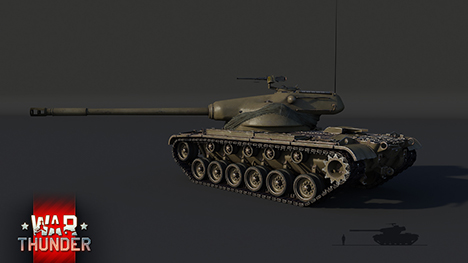 In War Thunder, the T54E1 will be a new premium vehicle available to American tank commanders upon release of the upcoming update 1.81 “The Valkyries”. Unlike all other vehicles, the T54E1 offers a truly unique experience within the American ground forces tree, combining some familiar features with exotic new ones.

The most striking new feature of the T54E1 is undoubtedly its oscillating turret. Although something French tankers are more than familiar with, this should come as a true novelty to their American colleagues. As a matter of fact, the T54E1 will be the first American tank in the game to feature a turret configuration of this type.

Unlike some French counterparts however, the T54E1 has a lot tougher frontal turret armor. Going up to a thickness of 127mm sloped back at an angle of 60 degrees, the T54E1 can easily withstand hit after hit if positioned correctly.

Arguably more important is, what tankers will find underneath all that tough armor plating. In the case of the T54E1, this will be a 105mm cannon backed up by a 9-round autoloading mechanism, replacing a human loader. The cannon itself, although it may not be apparent at first, should be somewhat familiar to veteran American tankers. It’s a derivative version of the T5 cannon found on tanks like the T29 and T95, modified to fire single-piece ammunition. This was primarily done to keep the autoloading mechanism relatively simple and allow for a fast rate of fire.

Besides the high rate of fire, the modified cannon also has a much more flexible selection of ammunition types for tankers to choose from. Ranging from conventional AP rounds over sub-caliber shot to chemical warheads, the T54E1 will always have the appropriate ammo at hand for any given situation. In addition to the main gun, the T54E1 is also equipped with the standard American machine gun duo consisting of a single 7.62mm mounted coaxially and a 12.7mm anti-aircraft gun mounted on the commander’s cupola.

Although the T54E1 is based on the M48’s chassis, the much more heavier turret, gun and autoloading mechanism led to a significant weight increase of over 8 tons compared to base model. As the original 810 horsepower petrol engine is still used on the T54E1, future commanders of this machine should expect a negative effect on mobility as a result of the increased weight.

The T54E1 will become available with the release of update 1.81 “The Valkyries” as a rank V premium vehicle, purchasable in-game with golden eagles. Until then, stay tuned to the news for more information regarding War Thunder’s next major update. Happy hunting, commanders!

Commenting is no longer available for this news
Rules
NewEnglander
51

You do realize that realistic air battles are in dire need of re-working? I exclusively fly planes every day and it is clear now more than ever that this mode is not only stagnant and imbalanced like never before, but also the audience for it has shrunken dramatically in the past year. So if rotary aircraft are exclusive to mixed battles, I don't think Air battles will continue to even be viable. Is this intentional? Will stand-alone air battles be eventually dropped all-together?

Most players play both tanks as well as aircraft and as such they can easily use both in mixed battles without a need to ever fly in air RB random battles. Ad to that the majority of promotion is for tanks this includes Thundershow, The Shooting Range, web adverts, etc. Realistic squadron battles are limited to having only 4 air & up to 8 ground vehicles. Having to spawn in a ground vehicle and scoring points in order to fly out in mixed battles? Can I spawn in an anti-air in air RB?

Fly Sim airplanes or Sim Ground Forces (there you CAN spawn in an AA.

Nice model, guys please show some love to the MB157 aircraft, we need his missing MAC 34 machine guns to get a proper 3.3 fighter in the Frech tree, thanks.

*With no think about additional drag and weight*

Uh gaijin. This update is all about helicopters and tanks but no love for planes? Why not fix the inherent problem with high tier bombers hmm? I mean i’d love to fly my bombers while actually making it to the target for once.

GIVE US SOME FUCKING PLANES GOOD GOD GAIJIN

The reason gaijin doesnt do things is because of people like you, shut up and be content.

Phosgore, Sure, we have enough planes but, "Be content?".. Easy for you to say, you are more of a tanker. If Air RB does go south you still have mixed battles to fly your planes in.. And your new rotary winged toys.

Just letting you know that I am the one that is reporting you for swearing, not Gaijin.

RedTipAlpha, And sadly the report will probably get more attention than questions about Air RB....

Will we ever get new versions of the DO 217?

xxhorusxx, any new planes at this point would at least be something

Well you guys change the model of the fj4b, the guns were 1000 rpm and the velocity was 1000ms, and the plane is a little bigger and longer than the real life one.

We'll forward that to the devs in our next feedback.

Ouiche, For How Many Times, It's Been Since 1.65 And There's Barely Any Difference Between Launch Tree And Current Tree. There's Alot Of Documentation Been Forwarded To The Devs But Nothing Happens With That Documentation

Japan got absolutely nothing this patch. What a total embarrassment.

Hakuyuki, That's Not 100% Confirmed, Japan Will Prob Get Some Fixes, And Rumours Go Around For The Type 75 MLRS

Man remember when gaijin used to look at air RB? when was that like 2014-2015? Games gone downhill fucking hard.

Air RB went down vecause its easier to use planes in Tank RB, air matches take too long, whereas Tank RB is actually fun

Phosgore, Even more reason to update the air RB game mode. Maybe even add some new ones that are well thought out and promoted in the same fashion as everything tank related. There are so many fun ways to offer up air battles with the feel and style of RB but with different non historical objectives. We used to have daily historical battles that would usually offer bonuses for the winning side. I remember the cues being packed every night. Why did they have to go???

Very cool, but did the US need another T5 premium when Japan has zero?

I know right? We have to keep asking them the same question so that they realize THERE ARE people who play Japan and want to see more Japanese vehicles!

I_NAMELESS_I, Imho, it's a self fulfilling prophecy - more and more players leave Japan alone due to the lackluster tree (specially talking about Ground Forces), their data back the fact that people don't play Japan, they don't produce stuff for Japan... You have to consider how long it takes to reach high tiers in a nation - not everyone has the time to leap rom nation to nation, and someone with limited time will probably not bother with troublesome tech trees like Japan.

US has plenty of planes it's true but none really as good as the zero at their BR. But wait, US has a zero too...

NewEnglander, the Zero is not as good of a plane as you're thinking. J2M's are harder to kill than those. A6m's are slow as hell.